Thermwood Corporation – A history of service

A history of service

Business View Magazine interviews representatives from the Thermwood Corporation, as part of our focus on innovative 3-D printing technologies.

As a manufacturing technology, 3D printing has become a powerful industrial force and an integral part of the everyday products we interact with. Its ability to create complex and creative prototypes across a wide set of machines, in addition to rendering quicker tooling cycles with more customizable solutions, have made it particularly vital for large-format, high-volume sectors such as aerospace and automotive. With these two industries continuously innovating designs and finding ways to make vehicles lighter and more efficient, steel also happens to be facing steep competition from materials such as carbon fiber reinforced plastics – composite materials which are now the preferred substitute for metal in many applications.

Thermwood Corporation, which is headquartered in the small southern Indiana town of Dale, has seized on these dual opportunities presented by additive manufacturing (3D printing by another name) and large-scale thermoplastic forming. About five years ago, they were approached by Purdue University and an aerospace company to hang an extruder on their 5-axis router. Fatefully, this crucial component would allow them to perform the additive functions (melting and depositing, or “printing”) and the subtractive ones (trimming and slicing) on the same machine. They’ve been leading with this approach, using their proprietary Large Scale Additive Manufacturing (LSAM) systems, ever since.

The company began its life in 1969 as a plastic molder of wood grained parts for the furniture industry. Its founder, Ken Susnjara, was a graduate of the prestigious Rose-Hulman Institute of Technology in Terre Haute, IN. “He came up with the method to thermoform wood grain plastics and then evolved to the CNC router,” shares his son, Jason Susnjara, Vice President of Marketing. “I always hear stories about Thermwood having a multi-tasking operating system before Microsoft was even around.”

Thermwood Corporation is now known as one of the oldest computer numerical control (CNC) router companies in the world, having developed their automated cutting machines back in the 1970s to trim their own plastics.

“When we first started producing the plastic parts of our furniture, we had our own injection machines,” says Dennis Palmer, Vice President of Sales. “We were extruding the plastic sheets. We made our own control for the machinery when we got into routing. We’ve also been an OEM for Mastercam for about 30 years, so we knew the controller. We knew how to build the machines. We knew how to write software and we knew 5-axis programming. All this knowledge lent itself perfectly to get into large scale additive manufacturing.” Today, Thermwood Corporation still maintains both lines of business – the 3D printers and CNC routers.

“The oil embargo hit and that kind of changed our direction,” Palmer explains. “We got more into thermoforming everyday parts. We wanted to decrease the labor of trimming those thermoformed parts, so we created the first CNC router. Before that, it was all NC – punched tape.”

“Thermwood took that to a woodworking show, the International Woodworking Fair in Louisville, KY,” Palmer continues. “We had two different divisions, plastic and machinery. We sold off the plastics portion of the business in the early 1980s and maintained just the machinery end of it. Since then, we’ve been building machinery, supplying equipment to the woodworking, plastic, aerospace, composite, and automotive industries.”

Thermwood’s modern manufacturing facility consists of a 175,000-square-foot main building, which contains its office and showroom, in addition to an engineering and manufacturing plant. A second building, situated one mile north of Dale, houses the company’s software development team, IT department, web servers, and network hardware. They also have a service facility in the United Kingdom. 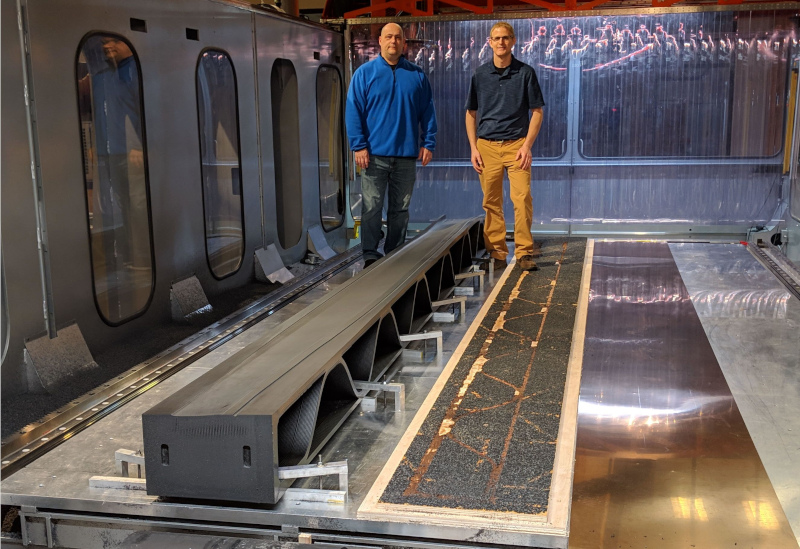 “Our main push right now has been toward the LSAMs,” says Susnjara. “A lot of R&D work goes into that. We do, however continually push R&D for our CNC machining line.” “We consider LSAMs an emerging technology,” adds Palmer. “Right now, we feel we’re the only company in the world capable of doing what we’re doing; that’s to make large scale tooling out of carbon-infused polymer that has no voids or porosity issues and needs no coating.”

To date, Thermwood Corporation’s machines and patented processes have been used to create parts for commercial airliner interiors, helicopter blades, and the underlayment of space shuttles. NASA even used Thermwood machines to build the Mars Flyer and Mars Lander.

One of the company’s philosophies, even back when it was strictly a furniture wood-polymer composite business, is the notion that service is key. “A lot of our repeat business is because of our service,” Palmer insists. “And a lot of our business is repeat business. We make our own control system. When we got into large-scale additive manufacturing, we created our own slicing software that married with our machinery. Whenever we want to make modifications, we can do it ourselves. We don’t have to worry about a third-party software vendor. What we say around here is: ‘If it doesn’t move, we paint it. If it moves, we patent it.’”

“Everyone else builds a steel structure, puts rails on it,” says Susnjara. “They have drives and they do this, that, and the other. What separates us from them is our service and support. We manufacture the guts of our own controller here. We also do the software development. Our technology services provide free service over the phone and online, as well as on our forums. It doesn’t cost anyone to talk to our service technicians, whether you bought a new machine or whether you bought a used one from a used machinery dealer, and not directly from us.” “We’ve got machines out there that are over 20 years old, and they continue to work,” adds Palmer. “When our customers increase their needs, then they buy another machine from Thermwood Corporation.” Another of Thermwood’s philosophies pertains to upgrading and maintaining their equipment. “Our service department, they’re my biggest competitor,” Palmer admits. “They’re a separate profit group. They buy some of our equipment, refurbish it, then they sell it under new warranties.”

“We’ll buy refurbished equipment from our customers, either on a trade-in or just straight out,” Susnjara says. “Then we’ll sell that machine as a new machine, with used pricing, under a new warranty. It’ll get a whole new paint job, new rails, new components. It’ll look like a brand-new machine, sold at a used price.”

As for training and education, Thermwood offers three maintenance training courses to 3- and 5-axis operator/programmers, covering all the basics from preventative maintenance, to electrical and mechanical troubleshooting, to machine alignments. They also train their own employees in-house. “We’re considered a small business, so to have apprenticeship programs and things of that nature would be difficult,” says Susnjara. “But because we manufacture the CNC routers, anyone that runs a CNC router in this facility is generally trained by us.” Besides onsite training, other employee incentives include health benefits, retirement plans, and a bonus structure that allows everybody to have a share in Thermwood’s earnings. “It’s a percentage on the amount of profit we earn every quarter,” Susnjara explains. “As long as they continue to do a good job, everything goes out great, all the machines work, and we have a profitable quarter, then everyone gets a slice of that.” “We also promote within,” says Palmer. “If you start at the bottom rung of the ladder, you can work your way to the top.”

Thermwood is expected to double in size in terms of revenue over the next few years. With this, the company will be even more empowered to drive the continued growth and achievements of some of its long-term partners. “Just as we want to be successful, we want to make sure our partners are successful,” says Palmer. “We feel that every machine we sell to a company creates a partnership.”

WHAT: A manufacturer of CNC routers and additive machines