June 2015Past IssuesSupply Chain and Logistics

While it’s true that the railroads helped build the American west – for years carrying goods and people further and further athwart the U.S. heartland – the fate of individual rail lines has not always been one of continued growth and expansion. Take the 115-year-old South Orient Line in Texas, whose tracks run about 400 miles from Presidio on the Mexican border to a junction, just north of San Angelo. The line was originally built in 1900 by the Kansas, Mexico & Orient Railway – the vision of one Arthur Stillwell of Kansas City, who wanted to connect his mid-western town to the trade routes of the Orient by way of Topolobampo, Mexico, a small outpost on the Gulf of California.
Several times over the past century, the South Orient was on the verge of extinction, as witnessed by the number of times it changed hands. First, it was bought by the Atchison, Topeka and Santa Fe line; then by the South Orient Rural Rail Transportation District in 1991, when it became the South Orient Rail Road; and finally, in 2001, the State of Texas bought the track and the right of way, leasing it to Texas-Pacifico Transportation.

Texas-Pacifico is a wholly owned subsidiary of Grupo Mexico, the largest mining corporation in Mexico and the third largest copper producer in the world. According to Elizabeth Miller Grindstaff, Vice President of Sales and Marketing for Texas-Pacifico Transportation, Ltd. (TXPF), which now operates the line, the new owner did so merely “to protect an opportunity, but not necessarily with any insight as to its future.”

But what began as more of a defensive acquisition – the line is one of the very few rail crossings between the U.S. and Mexico – has turned into a thriving and lucrative operation. Today, Texas-Pacifico is a growing company in the San Angelo region. And what has caused traffic on the railroad to have exploded over the last several years? The answer, in one word, is “fracking.”

Fracking is short for “hydraulic fracturing,” a relatively new method of extracting crude oil from previously unreachable, underground locations. Fracking is a well-stimulation technique in which rock is fractured by a hydraulically pressurized liquid made of water, sand, and chemicals. It has led to a rejuvenation of extraction operations in the oil-rich, Permian Basin of West Texas, which now produces over half a million barrels of crude a day. And the movement of millions of tons of fracking sand from Illinois, Iowa and Wisconsin to the oil fields makes up 90 percent of Texas-Pacifico’s current business on its 391 miles of track.

So, in a sense, the well-worn South Orient Line was simply in the right place at the right time to profit from a technology much newer than railroading, itself. And so, in 2015, TXPF now operates with 28 locomotives. It has a daily inbound and outbound interchange with BNSF and the Fort Worth & Western Railroad. It moves approximately eight inbound and eight outbound trains per week across its San Angelo subdivision; operates a continuous service to customers between San Angelo and Big Lake on its Alpine Subdivision; and provides a five-day-per-week road switcher service to customers in San Angelo and customers located between Fort Stockton and Rankin.

Of course, in order to accommodate more

than the 20,000 rail cars now riding on its tracks each year, TXPF had to upgrade an asset that had been all but abandoned. According to Grindstaff, the infrastructure needs were “tremendous.” She continues, “Our company lost $1.5 million each year during our first ten years of operation. We are still very young, but now, with significant volume growth. We are very strategic in investment and have been able to invest the last three years of revenue back into an asset that we don’t own.”

Now that the South Orient has a new lease on life, what does the future hold?
Grindstaff elaborates: “Although we have greatly benefitted from the energy sector (the railroad also moves crude oil, hydrochloric acid, and drilling mud), and wish it to stay robust, our hope is to be more diversified for the future in the commodities we move. With the assistance of the State of Texas and the Army Corps of Engineers, we will be responsible for rebuilding the international rail bridge at Presidio/Ojinaga. This allows opportunity between Chihuahua City and Dallas/Fort Worth, and far beyond for the movement of raw and finished products. Moving southwest, our line allows shippers the opportunity to avoid California ports, in favor of a faster route to Manzanillo, etc. Moving north, a Mexico shipper, or product coming up in container from overseas, can access the heart of the U.S. markets without going into California, or even Juarez/El Paso, or Nuevo Laredo/Laredo.”

As Grindstaff says, “Time is money.” And as moving freight in the most economical way possible is still a priority for most every business enterprise, Texas-Pacifico seems well positioned to “keep up with the demands of our fortuitous location.”

One wonders if the ghost of Arthur Stillwell is smiling somewhere up above, as fully-loaded railroad cars pulled by powerful locomotives make their way, once again, across the broad Texas plain.

WHO: Texas-Pacifico
WHAT: railway shipping company
WHERE: headquarters in Texas
WEBSITE: www.texaspacifico.com

AT A GLANCE WHO: BB&T Center WHAT: Home of the Florida Panthers WHERE: SunriseFlorida WEBSITE: www.thebbtcenter.comrailroadrailwayTexas Pacifico 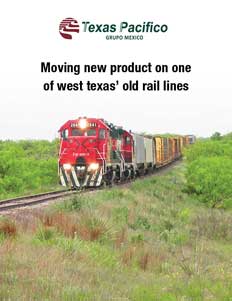