It wasn’t too long ago that photography was an intricate, time-consuming, and somewhat expensive art form. High-priced cameras, an array of different lenses, paper and chemicals, and sometimes even a well-equipped darkroom were the tools of the professional and intrepid amateur alike. Then came digital technology – pixels replaced negatives and prints, computer programs made darkrooms obsolete, and smart phones turned everyone into pointers and shooters.

What has never changed, though, is the desire to photograph, for pleasure and posterity, those special events – birthdays, weddings, holiday parties – that demarcate the joyful milestones of people’s lives. Into this domain stepped TapSnap Ventures Inc., a Vancouver-based company that has quickly become the leader in event entertainment, utilizing all of the most recent advances in digital photography and social media to help participants enjoy and commemorate all of life’s special occasions.

TapSnap is the brainchild of company CEO, Scott McInnes, and his team, who previously had launched DVDNow, a provider of DVD-dispensing kiosks for hotels, resorts, timeshares, and vacation rentals. Next to Red Box, DVDNow is the world’s second biggest provider of DVDs. But over the last several years, the industry’s technology has evolved, and since movies can now effectively be streamed online, McInnes says that it was time to come up with something new, while still retaining the ability to deal with independent entrepreneurs.

“We looked at all sorts of different businesses,” he says, “and we wanted to do something that was fun for the people we were putting into it. We wanted it, obviously, to be profitable, with a relatively low investment, and we kept coming back to the idea of doing a photo booth. At that point, photo booths were starting to become more popular again at weddings and different types of events, but there had been very little innovation. The systems that remained, more or less, were unchanged for many, many years. So, with our expertise and our experience with DVD Kiosks and other projects, we felt that we could come up with a much better photo booth; one that was connected with social media and had a more modern look and feel to it, with more modern features. We wanted to do something that was big and interactive; we wanted to make something that was more the center of attention at a party, where the people watching the people having their photo taking are having as much fun as the people having their photo taken – more along the lines of entertainment.”

“So, over the period of about a year, we developed our system,” McInnes continues. “We started doing events locally, here in Vancouver. We always had the intention of franchising, but needed to learn the business first to make sure that it’s viable and everything you think it is, and work out the kinks. We already had a good team together with DVDNow, so we got to work on putting the systems in place to be able to launch TapSnap and grow it. Out of the gate, we reached out to the people we’d already done business with through DVDNow, so a lot of our first franchisees were in the DVD rental kiosk business with us. And then from there, we just started to reach out to other individuals, who had looked at DVDNow, but didn’t do it, and then, people that we had no prior contact with, whatsoever. Within a pretty short period of time, we grew a sizable franchise network.”

Today, TapSnap has about 190 franchise units, worldwide. “The majority of our business is in the U.S.,” McInnes states. “We have franchises in Canada; we just opened up Australia; we’ve got a franchisee in Dubai, Ireland, some in Mexico, Guatemala, Peru, and Panama. It’s a business that works anywhere. The type of event you’re doing could be a little different depending on where you are, but anyplace that people gather for a social event of any kind, is a suitable event for us.”

TapSnap photo booths allow guests to pose for pictures, use a touch screen to drag and drop digital props, switch out backgrounds, write messages, and add filters. Then, at the touch of a finger, they can email the photos to themselves or others, share their creations instantly to their Facebook and Twitter profiles, and even print out an unlimited number of 4” by 6” glossy prints on high quality photo paper. “We’ve gone from just being a photo booth company to being a platform for social media and photography for special events, where we have a whole suite of products,” McInnes boasts.

While the company’s original focus was on social events – weddings, bar and bat mitzvahs, etc. – TapSnap soon reached out to corporations. “We do more corporate events and they’re more lucrative for our franchisees, because they’re longer and there’s more services that we can offer that appeal to a corporate client – like branding the system in our software with the corporate client’s colors and logos and really making it a customized experience for that client,” says McInnes. Having so many franchises across the map certainly helps TapSnap respond to a company’s requests. “For example, if Coca Cola wants us to do an event, they don’t call us up and say, ‘Do you have a franchisee in Tampa that could do an event for us?’” he explains. “They just say, ‘We need you on this date for this many hours.’ And we can do it, because we have such a large franchise network.”

While TapSnap’s reach is growing larger, McInnes says that some of its product offerings are actually down-sizing to accommodate the needs of the marketplace. “We’re coming out with a substantially smaller system for social events that are price sensitive,” he avers. “We have products at a couple of different price points. If they’ve got the budget, we’ll get them the big system, but if they don’t, then we have something we can offer them that’s still a lot of fun, that captures great photos, but will cost less money.”

Another plus of a smaller system is that it’s easier to transport. “Our current TapSnap set-up requires an SUV, at least,” says McInnes. “If you want to carry multiple systems, most franchisees will have a minivan, at least. But, the new product that we’re coming out with, TapSnap Studio, is something where you can send an attendant to the event on their own and they can take their own vehicle and put it in the back seat, because it’s quite small. That’ll be coming out in the New Year. But we’re never going to put something in an event that doesn’t take terrific photos and isn’t a lot of fun,” he adds.

Another TapSnap innovation is the TapSnap for Business line, which is made up of systems that are permanently set up in a client’s venue. “For example, we just installed a system for the Denver Broncos, and we did one, recently, for the Boston Red Sox,” McInnes relates. “These are ones that live in their stadiums and are all branded with the teams’ logos and colors and are designed to be more self-service. We’ll continue to develop that and, eventually, we’ll be designing systems for amusement parks and tourist destinations. Right now, we’re not necessarily the right fit for tourist venues unless that venue is having a special event. Say, a museum will bring us in for a fundraiser. There’s value in having us there all day, every day, in some capacity, but it doesn’t make sense if we have to staff it. So, TapSnap for Business allows us to build systems that we would sell to these venues, to be there every hour of the day, every day that they’re open – custom systems for any type of destination where being there is the event – everything from aquariums to amusement parks, resort hotels, stadiums, where we will sell them a system through a franchisee.”

McInnes also believes that TapSnap will continue to evolve as photo-sharing technologies advance. “For example, when we started, we were hooked into Picasa and Flickr for sharing photos,” he says. “We had Facebook on the machine and that was certainly popular, but Facebook’s really taken over as the predominant social media for photo-sharing. Five years from now, there could be something entirely new that hasn’t even been invented yet that’s the go-to platform for photos. If there is, we’ll integrate with that, as well. One of the nice things about being in this business is that we can continue to innovate and to piggyback off other companies’ innovations to create unique experiences at actual events.”

Meanwhile, McInnes says that TapSnap will also continue to seek out new franchisees who enjoy being at social events, have the ability to work nights and weekends, and are hard-working and motivated. “Dollar for dollar, there’s no better franchise opportunity in the United States,” he declares. “With a relatively small investment, our franchisees can go out and make real money. It takes some hard work, but it’s reasonable that they can expect a return on investment in relatively short order. And they’re going to have fun. We’re out there putting smiles on people’s faces.”

Check out this handpicked feature on Toys R Us Out Of Business Due to Lacking Digital Strategy.

WHERE: Headquarters in Vancouver, British Columbia

One Honda, One Hundred Thousand Trees 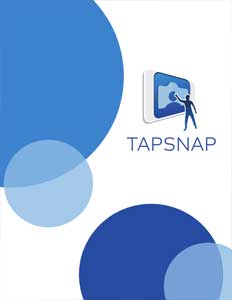