In a growth mode

St. George Regional Airport is a public use, commercial and general aviation airport located just outside St. George, in Washington County, Utah. St. George Regional opened in 2011, replacing the much smaller St. George Municipal Airport, which was located within the city’s borders and dates back to the early 1930s. The Airport is owned by the City of St. George, which is tucked into Utah’s picturesque southwestern corner, not far from the state’s border with Arizona and Nevada, and such natural wonders as Zion National Park, Snow Canyon, and the Arizona Strip.

Built for about $160 million, St. George Regional Airport is most certainly in a growth mode, as is the geographic area that it serves. “Because St. George is growing at such a rapid rate, I think this is the third year in a row that we’ve been among the top five fastest growing cities – and I think this year, we made No. 1,” says Airport Manager, Rich Stehmeier. “We’re growing so fast that the Airport is having to grow at the same time.” The number of GA hangars helps to illustrate the expansion that has occurred since the Airport’s Jan. 11, 2011 grand opening. There were just five hangars when it debuted and just two years later, that total had grown to 64. Today, there are 92 hangars at the roughly 1,200-acre facility.

Not surprisingly, the number of commercial flights has also grown dramatically. “Our first year of operation, we had just over 38,000 enplanements,” explains Stehmeier. “Last year, in 2017, we had 118,000 enplanements. Between 2016 and 2017, the airport grew by 32 percent, as far as enplanements go. We opened up with commercial service to Salt Lake (City) and, initially, we had a couple of smaller Brasilias (a twin-turboprop commuter airliner, produced by Embraer) that did some air work to L.A.,” recalls Stehmeier. “That shut down and then we convinced United to come in and provide service from St. George to Denver in that first year. Since that time, we now are up to five flights a day to Salt Lake on Delta, two flights a day, soon to be three, to Denver on United. We have three a day, currently, to Phoenix, Sky Harbor, and we currently have one a day to LAX. Those are all round-trips.”

At 9,300 feet by 150 feet, St. George Regional Airport’s sole runway is large enough to handle Boeing 737s and 757s, as well as the U.S. military’s Boeing C-17 Globemasters and KC-135 Stratotankers. “We take just about anything,” says Stehmeier.

St. George Regional Airport has a nine-person staff at the Airport. SkyWest Airlines, which is based in St. George, handles ground traffic there for Delta, United, and American Airlines, and has 32-35 employees, while Allegiant Air, which recently began service from St. George Regional to Mesa, Az., has a staff of nine. “Then, of course, you have the car rental companies and between them, they probably have about 30 employees,” Stehmeier adds. “The FBO, Above View Jet Center, has about 15 workers. The ‘specialty operators’, like maintenance and aviation shops, employ 20-to-30.”

A number of projects are underway, or in the plans, to accommodate the increase in demand. For example, St. George Regional Airport is in the process of more than doubling its paid parking capacity by adding 517 spaces. And 200 new parking stalls are being added for the Airport’s rental car companies to increase the total to 315.

Another project that will begin next spring is made necessary, not by growth, but by the geology of the land St. George Regional occupies.

“We will be closing next year on the 29th of May and then we will reopen the 26th of September, basically a 120 shut-down,” says Stehmeier. “The purpose of that shut-down will be to repair the runway. When they built the Airport, we knew there were some problems with blue clay out here. They thought they had engineered it correctly. The FAA signed off on the engineering and the specs. So we built it and the blue clay is what the engineers are calling ‘super blue clay’ or ‘aggressive blue clay’ and it has caused the runway to ripple. So what we’ve done is, until we close it and do the ‘big fix,’ we’ve gone out and basically milled-out asphalt and replaced it. We’ve kept the center portion of the runway flat so it meets FAA safety specs.

“What we’ll do during that shutdown is take 5,400 feet of the runway, basically right in the middle, and we will go down 17 feet and excavate all of that out, the entire width of the runway. The runway is 150 feet wide, but it will probably be about 200 feet wide, because you have to have a slope. We will excavate all of that dirt, all of the blue clay, and then they will bring in a material that’s like the clay cap that’s used in landfills. It’s optimally moisturized and, basically, water does not go through it. On top of that will be engineered fill and two feet below the surface, they will put in a new water barrier, about ¾ of an inch thick. That will go from 200 off the right side, all the way across the runway, to 200 on the other side. That will be for a length of 7,000 feet.”

Stehmeier says St. George Regional Airport’s engineers believe those measures, along with some related work, will prevent the runway surface from being adversely affected by the clay’s expansion should it get wet in the future. “We’re hoping that the engineers are correct and that we won’t have to do anything other than maybe an overlay for strengthening of the asphalt for the next 20 years,” he adds.

Stehmeier says concerns that the temporary closure might cause some passengers to become loyal customers of the closest major hub, McCarran International in Las Vegas, are mitigated by several factors. “We’re a smaller airport, so going through TSA takes five-to-seven minutes, even with the worst of traffic,” he explains. “Our parking is $5 a day, versus $13 a day in Vegas. And it’s a two-hour drive and it’s not a pleasant drive; it’s through the desert. Another problem with going to Vegas is you have to show up at least an hour to two hours early to get through TSA and then get to your gate and all that kind of stuff. So if you’re leaving at 6 o-clock in the morning, that means your leaving you home here at about 3 o-clock, 4 o-clock in the morning just to get down there.”

“What we’ve done is we’ve looked at it and what we feel is that because of that growth and the ease of using this Airport, the majority of the people will suffer through the closure and then they will be so happy to come back because of the hardship of what they have to do otherwise,” he adds. “All of my business people, they’ll come back in a heartbeat because of the ease of use and they don’t have to spend four hours on the highway.”

Since St. George Regional Airport’s creation on an unoccupied stretch of desert, a major, divided four-lane highway has been built from just north of the border with Arizona, past the Airport and on to the Zion National Park area. That has led to housing growth near the Airport, with the potential for commercial development nearby, as well as on St. George Regional’s grounds, says Stehmeier.

“We have a large area that will be developed into high-end commercial building and maybe a light-industrial type of thing,” he states. “There have been several plans and several developers that have come over the last four years and looked at that, but at this time, they haven’t done anything. I think they’re waiting for continued growth so that it becomes a viable development. It’s in the business plan for the Airport and around the Airport and we will be updating that business plan and the master plan for the airport within the next two years.”

Check out this handpicked feature on Yakima Air Terminal – The best way to travel.

WHAT: A public use, commercial and general aviation airport 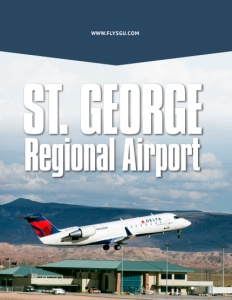