Special Products & Mfg., Inc. (SPM) is a contract manufacturing company that provides medium, large, and growing OEMs with manufacturing services and solutions. The company specializes in electro-mechanical assembly, precision metal fabrication, machining, welding, and powder coating. “We deliver products to a lot of different industries, a lot of different sectors,” says Rob Grand-Lienard III, the company CEO who has run the business with his brother, Ed, SPM’s President, since 1997. “But oil and gas, transportation, medical, alternative energy, cloud and data storage, and telecom are some of the industries we provide solutions for.”

SPM was founded in Dallas, Texas in 1963 by the brothers’ late father, Robert (Bob) J. Grand-Lienard Jr. “He was a tool and die maker,” recounts Grand-Lienard. “He got an opportunity to go out on his own and he started the business in our two-car garage as a metal fabricator with some light stamping.” Over the years, the privately held, family-owned company expanded its footprint – from the garage to a 5,000-sq.-ft. building in Dallas, then a 15,000-sq.-ft. facility in Garland, then, in 1982 a move to Rockwall, Texas, where in 2006, SPM built a new, state-of-the-art, 140,000-sq.-ft. facility on ten acres in Rockwall Technology Park. In 2020, the company will be opening a new facility in Austin, Texas with 30,000 square feet of light fabrication, inventory, and logistics. 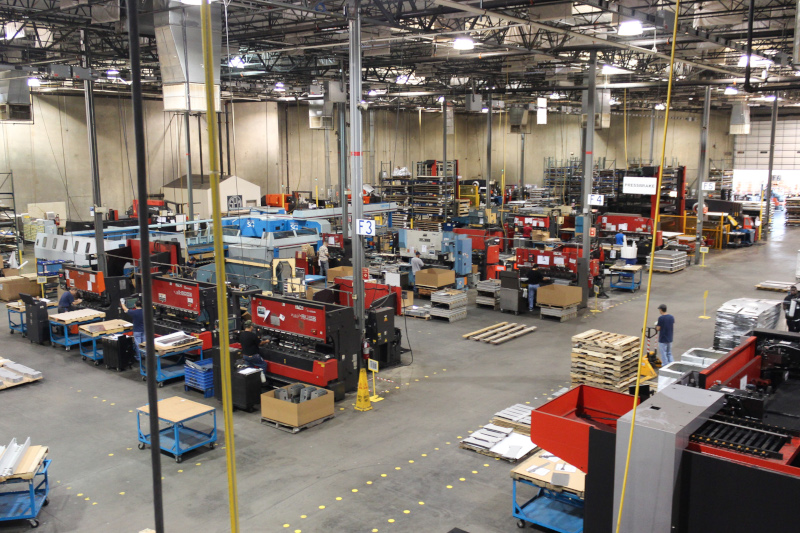 Grand-Lienard stresses that SPM is in a very competitive industry, with metal fabrication, over the years, having become a commodity that many can operate. “Throw four walls up, put in a couple of machines, then you could produce metal parts,” he says. “And the competition is not just down the street anymore. We face global competition: China, Korea, Mexico and the guy around the block.” But he also believes that his company remains successful (it grew from $2.2 million in annual sales in 1987, to an estimated $40 million, this year) due to two main factors. The first is a continual focus on advances in production technology and a strong internal culture. “We’re heavily automated; a lot of robotics, a lot of automation,” he reveals. “And our ability to buy and integrate automation quickly is paramount in our industry.” “We also want to be the employer of choice by empowering our team to continuously improve safety, processes and material utilization.”

But just as important, if not more so, was a radical change in the company’s culture that began about ten years ago. “We began to shift our culture from a very command and control culture to a more employee-engaged and empowered culture,” he states. Management had always invested in leading-edge equipment, but it often failed to recognize the human equation as the company’s workforce continued to grow. In fact, the brothers pretty much practiced what was typical top-down control, with the expectation that set procedures, with no questions asked, was the most efficient way to run a complex business.

But after much reflection (prompted by shrinking profit margins), the Grand-Lienards turned to an outside CI (Continuous Improvement) Manager who convinced them to turn the operating pyramid upside-down and begin granting their 200 employees at the time, the ability to suggest improvements and initiate change. “That was a big shift for our business, but today, it’s paid off,” Grand-Lienard admits. “We have continuous improvement efforts underway, every day, all day. We’ve built in tools where the employees can have their ideas and suggestions vetted and brought to the forefront.”

“And we have an emphasis on building high performing teams – a collaborative approach to decision-making, and we get people’s input before we move forward, so we’re running a more flat organization, now, than a hierarchical one,” he adds. “So, decisions can be made very easily to make changes within the organization; you don’t have to go up the ladder to make a decision – they know they can do it themselves, now. They don’t have to tell us what they’re doing if it can be done in 30 minutes or costs less than $30 dollars. They’re authorized to do that. Last year, if I’m not mistaken, was a high water mark for us; we had over 680 continuous improvement ideas that came from our company and our employees. That’s a little over 3.1 per person in the organization, which is pretty good.”

Gran-Lienard is confident that the changes in the company’s culture has given, and continues to give it, a competitive advantage. “When we get into a competitive situation on a job or a quote, we’re able to go to the team and say, ‘If we want this work, we’ve got to come off of it ten percent and still maintain our margin. What can we do?’ Collaboratively, we come up with ideas to make it work; to be able to trim that ten percent off and make it work.”

That advantage extends to customers and suppliers, as well. “We’re dealing with the Caterpillars and the GEs of the world,” Grand-Lienard notes. “They come in and look at this culture and go ‘This is like the culture we have,’ or ‘We would love to have this culture inside of our building.’ So, absolutely, it’s a differentiator. You still have to compete on price, delivery, and quality, but that change in culture calls forth what we call ‘discretionary effort.’ So, a team member can come in, every day, and choose to give that extra 10, 20, 30 percent. In building and defining a culture that engages employees like that, we’re after that discretionary effort. If you don’t have it, they clock in, they go to work at their work station, and they produce what they can for the day; that’s what we call the 100 percent. We’re after that extra 10, 20, or 30, whereby they’re getting more efficient, they know their ideas are being heard, so they’re more engaged. Bring your brain to work with you – don’t check it at the door!”

Another big change that came about over the last decade is the creation of SPM University. “We started SPM University ten years ago,” Grand-Lienard recalls. “We have no industrial training programs within reach that we can send our people to. And there are no shop classes anymore in high school; there are no tech vocational schools around. So, we started this on our own. It was a blank piece of paper when we started it, and what we have done is build a grassroots training program for onboarding and internal training.” 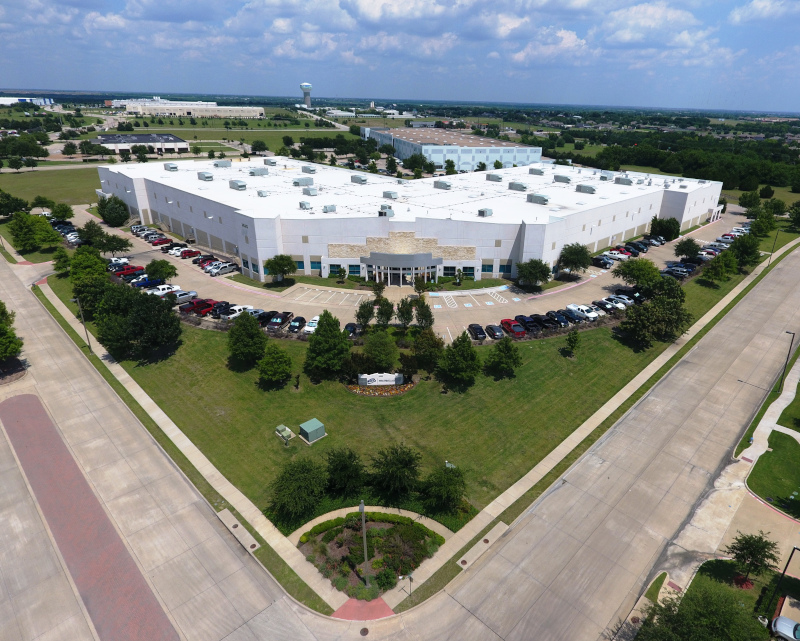 “What we try to do is give everybody in our organization three tools in the tool belt,” Grand-Lienard continues. “They have their main job, and then we cross-train them in at least two other skills. Whatever their skill level is, and whatever they’re doing, we can train them in two other skills that are equal, or just slightly less valuable, to our organization. That way, as a job shop, as a contract manufacturer, as the egg goes through the garden house, if you will – and the backlog could be in various different areas within our plant – those folks can move around the plant very easily and then we don’t have to go out and hire and we become more efficient.”

When there does become a need to hire more workers, once again, SPM relies on its company culture. “We’ve got and awesome reputation in the DFW area,” Grand-Lienard enthuses. “We’re known for our culture in being able to have a say-so in what’s going on. People want to work inside a culture like that. An example: last August, we needed 23 people to ramp up for a customer. We were able to hire those 23 people within ten days, and put them to work. Within 60 days, they’re productive. That’s just unheard of; other people would struggle to do that. We’ve got people who know what we’re about and they’re showing up. We also have a good referral program with our team going out to help us recruit. They get a bonus if they help pull in either a family member or a friend or somebody else they know.”

Going forward, Grand-Lienard says that SPM is now concentrating on automating its processes: “We’ve automated a lot of equipment, and we’ve automated machinery, but we’ve not automated processes. So, we’re in the middle of automating our quoting process, right now. Our quoting process takes about an hour per job. We had 472 jobs come in a couple of weeks ago; the Corona virus scare had us bringing in lots of customers that had supply chain issues and we’re quoting a lot. 400 quotes is a lot for us; normally our backlog of quotes runs between 50 and 150.  So, that’s 472 hours worth of quoting – that’s ten people for a week or one person for ten weeks. That doesn’t take care of my customers. So, I’m working on a program to automate estimates that will be able to do those 472 jobs. We did 160 jobs in less than ten minutes a couple of weeks ago in the beta testing mode. That’s four week’s worth of work in less than ten minutes and it’s all based on artificial intelligence; we build AI into the system and it automatically does the work for us. That’s what’s coming. The frontend process in my business will become completely automated where a customer drops an order in and I should be able to spit something out in less than five minutes. And, if they place the order, I should be able to be out on the floor in less than five minutes building the parts. That’s a game changer for us – automation of process.

“The other thing is connectivity. We have a real emphasis over the next three to five years in making sure our team is connected, our machines are connected, our ERP (Enterprise Resource Planning) is connected, our customers, our suppliers, and our community are all connected. And when I say connected, I mean electronically. We’re communicating, we’re monitoring, we’re collecting data in, we’re putting that data back out through connectivity to all of our stakeholders. Our initiative is to double our business in five years and, only through automation of process, equipment, and connectivity, double our business with only 50 percent more people. That’s our goal.”

“Our industry is going to change dramatically with automation robotics and artificial intelligence – Industry 4.0,” Grand-Lienard states, in conclusion.  “You’re going to have those that adopt and those that don’t adopt in our business. The differentiation when that is fully implemented in five years: there will be the haves and have-nots. The have-nots will be on their way to be completely out of business and the haves will be picking up more and more market share.”

And Special Products & Manufacturing, Inc. fully intends to be one of the haves.

WHAT: A contract manufacturing company and sheet metal contractor

Metalwest has a great appreciation for its working relationship with Special Products and is proud to support their efforts as a premier contract manufacturer. At Metalwest, we strive to provide value by combining a resourceful and professional sales effort with operational excellence. With our eight locations, we are able to offer customers the highest quality sheet and coil products in carbon, aluminum, and stainless steel. Our services include in-house processing capabilities, value-added services, inventory management programs, and on-time delivery. We are proud of our solutions that go beyond metal.