Historically speaking, the field we know today as forensic science started in a less-than-scientific setting, using less-than-scientific methods. Most forensic procedures were born from routine criminal investigations and were later “refined” in police laboratories. They weren’t backed by transparent, validated, or tested ways of doing science, nor were they intended to function that way.

Fast forward to today, forensics has done a complete one-eighty. Thanks to intensive computational methods and customized and rigorous implementation strategies, forensic operations in our current world have shifted to reflect data-grounded, experimentally validated work across a wide spectrum of applications. In crime laboratories across the U.S., technicians and scientists are arming themselves with increasingly sophisticated identification technologies, while innovations from forensic R&D are bringing new techniques to bear on risk analysis, mass fatality planning, and response, and, as always, crime-solving.

Cue SNA International, a forensics consulting firm headquartered in Alexandria, Virginia that specializes in biometrics, forensics, and identity intelligence services. Since 2002, they’ve been helping laboratories around the world streamline their processes, work more efficiently, and implement solutions that aid in all forensic facets of criminal investigations. 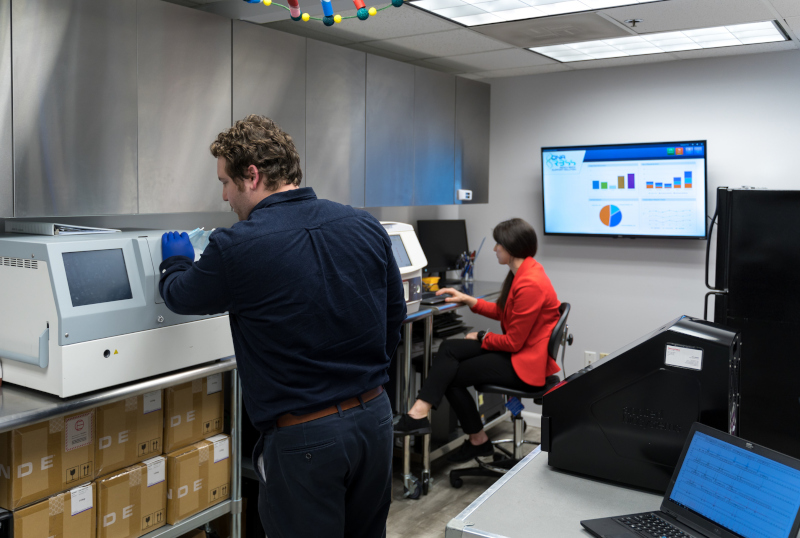 “My business partner, Steve Niezgoda, and I were assigned by the National Institute of Justice to support New York City, post 9/11,” recalls Chief Science Officer and Founder, Mandy Sozer. “in 2001, we were tasked with supporting the Office of the Chief Medical Examiner and the New York State Police in the human identification efforts from the World Trade Center. On our train rides back and forth to New York – on the way back, mainly – we’d try to solve problems. Steve has a background in information technology (IT). My background is in forensic DNA laboratory operations. So, we’d talk about how to combine IT and laboratory operations to improve the efficiency and effectiveness of forensic operations.”

The fruit of those discussions is the now world-renowned, SNA International. “We couldn’t call it ‘Mandy and Steve’s company’,” Sozer quips. “Instead, we started it as Sozer, Niezgoda & Associates. Several years later, we changed the name to SNA because it’s easier to pronounce. ‘International’ was added to reflect the international work we’re doing in forensics.”

Sozer stated she’s always been strategic in her approach to finding consulting work, and although global in scope, the company got its big jump with opportunities seized right in its own backyard – in Washington, D.C. with the larger federal government contracts. With nearly 20 years in the defense contracting industry, they’ve gained valuable experience on a wide variety of interesting projects including preparing laboratories for ISO/IEC 17025 ILAC G-19 accreditation and conducting genealogy research to identify the primary next of kin for soldiers who remain “unaccounted-for” from past conflicts.

SNA was also instrumental in managing support for one of the most devastating natural disasters in U.S. history. “We ran the DNA identification efforts following Hurricane Katrina,” Sozer explains. “After months of stalled DNA testing, we came in and within two weeks were able to start reuniting families and answer questions from those who’d lost loved ones to Katrina.”

With the threat of COVID-19 now looming large, SNA has had to temporarily restrict its worldwide recovery efforts for the U.S. Defense POW/MIA Accounting Agency. Fortunately, they’ve received some Small Business Innovation Research (SBIR) contracts that still allow them to contribute to the forensics community in other ways. “Think of us as an incubator within the larger organization,” says Allen Carr, Director of Business Development and Technology Solutions. “It is not uncommon that our government clientele identifies a capability gap, and they turn to SNA to assist them in the development of concepts of operations and architectural frameworks for new solutions or systems. We also contribute expertise to assist in the development of policy language that makes new technology offerings more accessible.”

Carr suggests the Department of Homeland Security (DHS) as an example. When DHS determined a need for implementing Rapid DNA operations to identify human trafficking, promote legal immigration, identify individuals trying to harm our homeland, and reunite families following disasters, they turned to SNA. Funded under a Small Business Innovation Research (SBIR) grant through the DHS Science and Technology group, SNA is developing new reach-back technology. “It’s a unique role that SNA is serving,” says Carr. “We developed a software application to support compliance with privacy policies and automatically connects Rapid DNA end-users in the field with subject matter experts in the lab.” The SBIR agreement allows SNA to transition the technology to address the needs of State, Regional, and local forensic laboratories as well. “We’re helping to build and then transition federally funded R&D projects for use by other entities.” 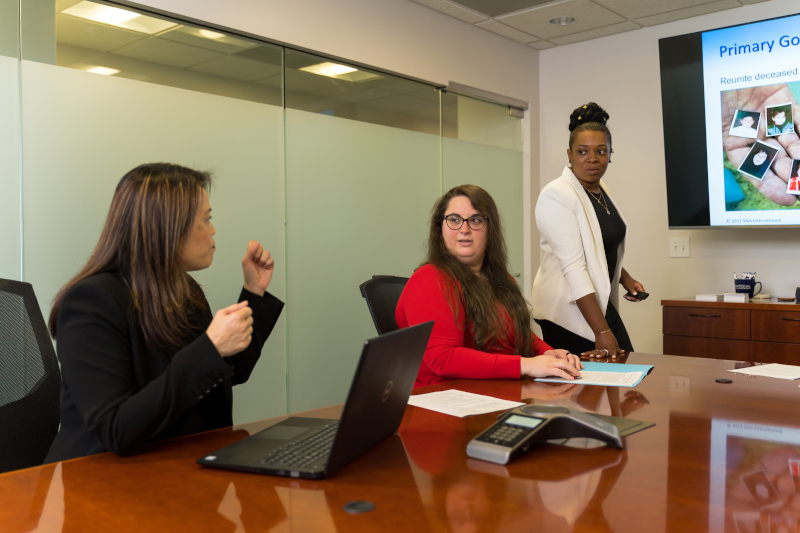 Tapping into such a diverse group of skill sets also means a wider range of consulting expertise for SNA International clients. “IT and DNA are the nucleus of the company,” says Sozer. “That’s essentially how we started but our services are relevant for all forensic disciplines. The agencies we consult for are interested in increased efficiencies and operations. They recognize the value that our staff brings to those opportunities, whether they center on forensics, biometrics, or identity intelligence.”

SNA certainly recognizes its own people, too. “We’re all about quality,” says Chief Growth Officer, Cecily Sullivan. “Not just quality of data, or quality of deliverables to our clients, I mean the quality of the people who work here. People want to work for our company. And when they get here, they don’t want to leave. Our retention rate of 98% speaks volumes to the type of company SNA is.”

“That 98% retention rate of employees isn’t entirely about how much you pay them, it’s also about how rewarding the work is for them,” adds Carr. “Ultimately, they’re acting in support of a mission. SNA is strategic in what opportunities get selected for us to pursue. Part of that evaluation involves questioning: Can we positively impact the community? The world? How are we going to use forensic science to do good?”

Carr believes it’s time to consider how forensic science and research can contribute to increased understanding by the public. For starters, it’s a well-known fact that media portrayals have a significant influence on public perceptions, and forensics is one of those subject matters that gets sensationalized. It’s called the “CSI Effect” – a phenomenon where exposure to primetime shows like CSI: Crime Scene Investigation and Law & Order: SVU creates unrealistically high standards for forensic science. Carr offers the following scenario to highlight the trend:

“These shows are 60 minutes long. Typically, if DNA is used for forensic evidence, the crime scene technician will collect and within 10 minutes be provided a DNA profile. Within the hour, they’ve tied the case together, closed it out, and sent everybody home. So there’s this public perception that DNA evidence should be part of every criminal prosecution. I hear from attorneys that if they don’t offer DNA evidence the juries are conditioned to ask, ‘why not? Why don’t you have it?’. The reality is that forensic DNA laboratories are overloaded. Each year there are more requests for forensic DNA analysis, and the labs are often at capacity. They simply don’t have enough equipment, trained technicians, and forensic scientists. This has resulted in an overwhelming backlog of casework. The U.S. Congress has allocated hundreds of millions of dollars to reduce that backlog, nationally. There is this enormous disconnect between public expectation and the reality of the forensic science world.”

Carr goes on to explain that with Rapid DNA testing, a technology that’s been around since 2010, DNA can be used to identify an individual just about as quickly as they do it on television. “Rapid DNA testing was designed to be used by non-technical personnel, and for that reason, there’s been concern from the forensic science community. The concern is that a non-technical person may make a mistake in analyzing what the DNA profile data is telling them. From a legal perspective, if mistakes happen, the integrity of DNA for evidentiary use could become compromised. This concern has slowed law enforcement’s adoption of the technology.

It is the DHS SBIR grant funds that have allowed SNA to develop the automated reach-back software package that will sit between the Rapid DNA instrument in the field (the one being used by non-technical, law enforcement officers) and the more traditional laboratory setting (a remote, accredited facility staffed by subject matter experts). Because of how well the company understands the operational requirements at the edge and the need to enforce forensic discipline at the laboratory level, SNA is filling a unique niche. They’re creating solutions that are not only moving the forensics industry but can change the way the criminal justice system uses DNA.

“This software isn’t just for prosecution purposes, it also exonerates the innocent” Carr clarifies. “On TV, they’re using DNA analysis to speed the investigation, and too often, because of the delay in processing, that doesn’t happen in real life. But with SNA’s solution helping ensure the integrity of the data, it can.” Having already made the Inc. 5000 list twice – this year earning the 150th position with close to 2500% growth – SNA International is expanding in ways the industry hasn’t seen before. “The U.S. Small Business Administration has been a phenomenal resource,” says Sozer. “They’ve been instrumental in helping us grow from a one-person business to a 250-person company. We’re a business started by a woman that excelled in STEM, and so you always have to think bigger. If I could start all over again, I’d have started thinking bigger sooner.”

What: Global leader in forensics, biometrics, and identity intelligence

Where: Headquartered in Alexandria, Virginia