Growth without missing a beat

The Town of Mansfield, Massachusetts is a thriving hub of Bristol County, in the southwest suburbs of Boston and also close to Providence, Rhode Island. Mansfield was formally established back in 1775 as part of the rich and vibrant history of the Commonwealth of Massachusetts. Its 24,000 residents benefit from an excellent school system and overall great living environment. Mansfield is blessed with a very strong business base and a beautiful downtown that is beloved by the community.  It also hosts a commuter rail station that conveniently connects the town directly to Boston and Providence, along with its own Municipal Airport.

Mansfield’s School Department consists of five schools, governed and regulated by a Superintendent of Schools, as well as the School Committee. Consistent with the Town’s financial motto of “One town, One vision, One budget”, the Office of the Superintendent of Schools is literally connected to the Town Hall, which reflects the close relationship the Schools share with General Government. Mansfield also has its own Electric Light Department, with one of the most affordable electric rates in Massachusetts and delivering exceptional service. With a newly constructed Public Safety Complex that is home to its Police and Fire Departments, public safety is in good hands under the direction of its progressive Chiefs, as is government administration under the auspices of the Town Manager and Select Board. Also, of note is the impressive Mansfield Public Library and Council on Aging facility located next to the popular Memorial Park. In addition, Mansfield is home to amazing recreation and conservation areas. 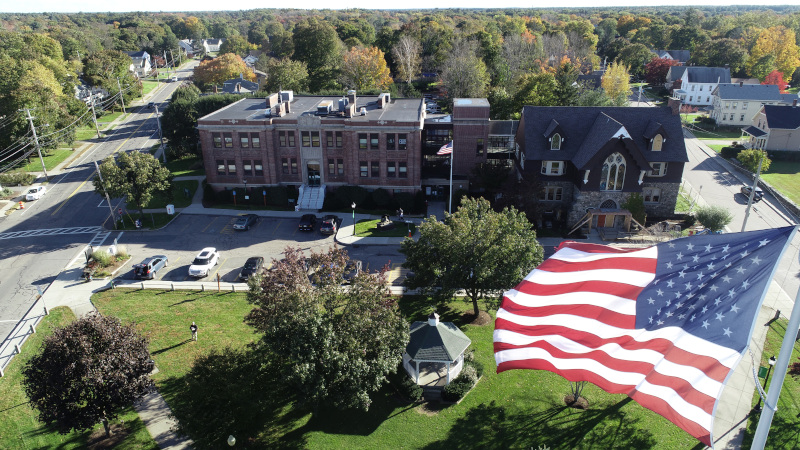 Not surprisingly, the COVID-19 pandemic has affected Mansfield, as it has most other towns and cities in Massachusetts and those across the country. Kevin Dumas, Mansfield Town Manager, reports, “COVID-19 is a challenge for everyone. As for the town, it allowed our resiliency plans to be put to the test and we were able to go fully virtual within just one day, which is great. While some transactions had to be done manually in the building, we were providing all our town services in a virtual way to all of our residents and we are really proud of that. Due to a potential COVID-19 case, the town had to close its facilities in one day at the beginning of the pandemic, followed by the Governor’s Stay at Home Advisory. No one really ever thought we would have to test it and do this in just one day. It was amazing to see the staff go virtual with various tools, such as GoToMeetings, and stay that way.”

In the meantime, while the staff was working remotely, there were still many initiatives moving forward. A very significant one was completed by the beginning of this fiscal year in July. Dumas explains, “During that whole period from March to July, the town was working on completing its update to Mansfield’s Comprehensive Master plan. That is our guiding planning document moving forward over the next decade. So, there is no doubt that this initiative was very important to be worked on during that time, and all our board committees did so while meeting virtually.”

Barry LaCasse, the Assistant Town Manager/Finance Director, adds, “I would also like to mention that the Town of Mansfield is pursuing a Green Community designation, which is another important “green” initiative. The Green Community Designation provides a road map along with financial and technical support to municipalities in Massachusetts that pledge to cut municipal energy use by an ambitious and achievable goal of 20 percent over 5 years and meet criteria established in the Green Communities Act. In Massachusetts, that is something that many cities and towns have already received. We expect to receive that designation by early next year. And the benefit of that designation is that it will open grant opportunities and opportunities to make the town and its buildings more energy efficient. And that includes using grant money to buy fuel-efficient cars and, in some cases, trucks. So, we are excited about that, and we have the full support of the Select Board in Mansfield.”

Despite the pandemic, the town continues moving forward while, at the same time, working on several other interesting initiatives, including the Request for Proposal (RFP) for the redevelopment of a piece of property located in the downtown core. The building is a former North Main Street Fire Station.  “We find this property attractive for redevelopment for uses that are allowed by existing zoning in the Downtown District,” says Dumas. “And we are excited about that. There is interest in this redevelopment effort and it is an encouraging sign for the Downtown, as well as the community.” 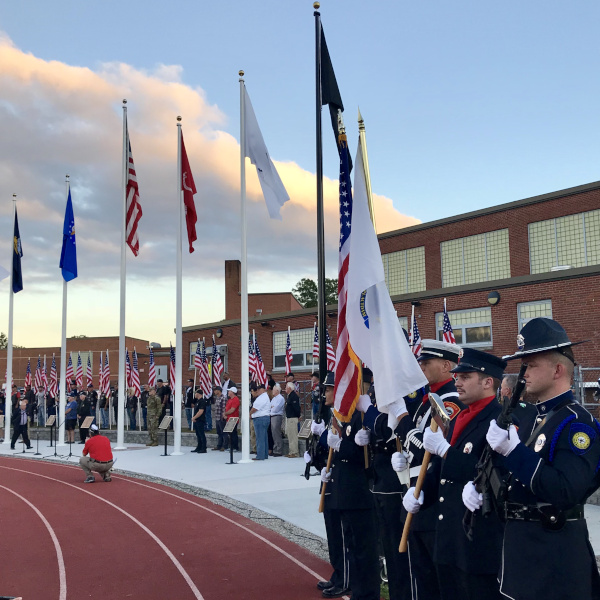 The due date for responses to that RFP is November 20, 2020. The property became available for disposition because the town opened a new public safety facility more than a year ago –  where the Mansfield fire department is now stationed. The location of the old fire station is a key area in the downtown because diagonally across the street at 300 North Main Street is a 100-unit mixed-use development on the corner of Thomas Street. It comprises 100 units of residential housing and commercial business on the first floor. That development is almost complete at this point in time.

Dumas acknowledges, “That construction Town-wide has been ongoing throughout the pandemic, which is impressive to say the least. In addition, we also have a 384,000 square foot facility that was formerly occupied by Medline. They will be moving out of town to a new one million square foot facility. However, their current facility is being obtained and housed by Amazon. So, we were able to work through that transaction and its required permitting efficiently through our expediated permitting review process. The building permit alone is more than $200,000, and they will occupy that space by mid-2021. We are very pleased for this new addition to our business park and community.” Also, at 30 Reservoir Street, a new 100 room hotel under the Marriott family is currently under construction. And there is a mixed-use commercial office building under construction on the same site, which is directly across the street from the Xfinity Center entertainment venue on Route 140.

Kevin is proud of the continued developments in the town. He notes, “While we are seeing so many negative impacts on the economy outside of Mansfield, I can say that the development is still going on in town, which is an impressive sign for our local economy. We have seen a new Italian Restaurant, Trattoria Romana, open in the North End just outside of our downtown which is adjacent to the ongoing rehabilitation of a former Chocolate Factory that will house 130 residential units and be occupied in 2021. So, I can say that, certainly, there are a lot of positive items to report here.”

As you can imagine, State Aid and local revenues were of concern in developing a budget for FY2021 due to the pandemic. LaCasse recounts, “I joined Kevin’s team in early February of this year. And when I came on as the Assistant Town Manager and Finance Director, one of my first tasks was to balance the proposed budget. The initial budget was complete before March 15, 2020. And then with the advent of COVID-19, we had to reconsider our budget and make some really tough choices and decisions about what the pandemic would do to our economy and how it would affect the local aid we receive from the Commonwealth. Through conservative revenue estimates and the use of some reserve funds, we came to a consensus on the budget. Our consensus team consisted of our Select Board, School Committee, Finance Committee and members of our administration. In our meetings, we discussed what these decisions meant for the Town of Mansfield and its departments, along with the services rendered to the public and how to handle pandemic expenses.”

Kevin Dumas is very hopeful about the future prospects for Mansfield. He states, “We have been diligent in working on improvements to our local infrastructure, extending multi-use paths for pedestrians and bicycle accommodations, and continuing with spring and summer public works construction projects. I applaud the amazing work that the staff has done and continues to do every day. It is almost as if, despite the pandemic, we haven’t missed a beat. And this is something I am truly proud of as the Town Manager of Mansfield.”  The town will continue to work with its public relations and marketing firm over the next year to illuminate why Mansfield is so special and has so much to offer.

What: A southwest suburb of Boston

WHERE LIFE SCIENCES INNOVATION IS BORN

Boston hosts high concentrations of biotech activity with established broad-based biotech industry segments that are growing. One-third of all U.S. biotech investment is made in the Boston area with about one-third of the biotechnology employees working for companies in the region. Eighteen of the top 20 drug companies now have a major presence here, as well as all 10 of the top medical device companies. More than 11 million square feet of lab space has been built in the last decade, bringing the total to more than 28 million square feet.

Abundant space and development opportunities await at BiodiverCity of Mansfield. Contact us now and secure your future home in the hub where life sciences innovation is born.

Mansfield Electric was founded by the local community to provide low cost and reliable power.

In 1903, on a plot of land on West Church Street, two 150-horsepower American Diesel engines were housed in a brick building to electrify 345 street lights.  Thus, the Mansfield Municipal Electric Department (MMED) was born.

Today, over 117 years later, MMED is still governed and operated by those in the community by being one of 41 public power electric utilities in the Commonwealth of Massachusetts.  As a publicly owned utility, MMED’s focus is always to provide affordable and reliable electric service for the people and businesses in Mansfield.  Thus, we are proudly and consistently ranked with one of the lowest electric rates in the state.

Mansfield Electric is also one of most reliable power utilities in the nation.  Consistently recognized as one of the top 12% of the 2,000+ public power utilities in the nation to earn the prestigious Reliable Public Power Provider (RP3) designation from the American Public Power Association (APPA), Mansfield Electric provides the highest degree of electric service based on four important disciplines: Reliability, Safety, Workforce Development and System Improvement.

For over a century, the mission of Mansfield Electric has always been to deliver affordable & reliable public power to its customers.  It’s a tradition we proudly continue today.  Learn more at www.mansfieldelectric.com.