Business View Magazine interviews Brian Reese, President of Reese Tower Services, as part of our focus on the telecommunications sector.

Reese Tower Services (RTS), based in Drums, Pennsylvania, specializes in providing comprehensive mapping and inspection services to the tower and pole industries, and their communications, sports lighting, electric utility, high mast lighting, traffic, and wind energy assets, whose structural integrity is constantly under attack by the elements, corrosion, and fatigue. 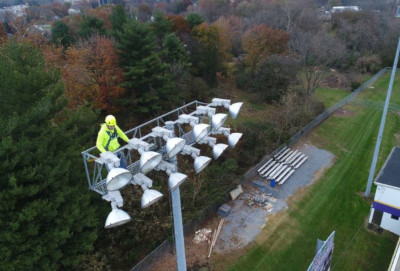 Reese Tower Services was founded by Brian Reese, who received his Bachelor of Science Degree in Civil Engineering from Penn State University, who spent several years as a consulting engineer in the power industry, and then moved into the tower business, helping to produce tubular steel poles and different types of pole structures for supporting communication devices. “Back in those days, the richest guy in town had a bag phone in his Porsche and none of the rest of us had anything,” he recounts. “But, by the time I left the pole company about eight years later, everybody had cell phones. It was a real hot time; a lot of demand; a lot of tower manufacturers across the county were incredibly busy.”

“The public appreciated the cell service and the data capabilities, but eventually, they grew tired of seeing a new tower going up on every block,” Reese continues. “So, the industry moved on towards structural modifications and retrofits. The whole modification business was born out of a need to utilize what we had; taking existing  structures that were designed well in their day, but by today’s standards might be under-designed, and in need of structural modification. So, when I left the pole company, I was involved with a company that did structural modifications all over the United States.

Reese explains that, in addition to the public’s aversion to poles going up everywhere, its ever-increasing demand for more data usage has made tower modification absolutely necessary. “When cell sites and the original cell systems were designed, they were designed for voice calls,” he states. “You can move a lot of voice calls on a network, but when you’re watching Netflix movies all night long, you’re pumping a lot of data through. Today, nobody cares about minutes, and nobody cares about texts, but all the data they use strains the systems and requires carriers to do antenna change outs, and, in many cases, the antenna sizes go up, which in turn, creates more load on the structures, which then requires us to modify the structures to meet their structural demands.

“So, we will go in and look at structures from a feasibility standpoint before they’re modified, and then we come alongside while they’re doing the work. On a percentage basis, our highest product line in terms of volume is certified weld inspections, as well as non-destructive examinations – methods which examine welds and check for quality and structural adequacy of the welds. This is a significant amount of our work.

“We work in the telecom industry; we work in sports lighting, where we will do similar investigations, for example the lights at your high school football field – the structural adequacy of those light supports. We also do work for the broadcast industry. We typically find ourselves nicely entrenched in the area where we are providing professional services in the field, as well as providing our deliverables to engineers who either don’t have the ability to do what we do, or no interest to do what we do. But we have an understanding of what engineers want and need. We’re very careful with the quality of the data and information that’s obtained before we turn it over to engineers. It’s a big challenge in our industry; if you send somebody out to collect data, they don’t always know how it’s going to be used at the end. And if you don’t know what you’re doing, it’s very easy to obtain incorrect information.”

While Reese Tower Services only has four employees, Reese maintains that the company actually has a national footprint, because he has the ability to call on a nationwide network of subcontractors. ” In addition to what we self-perform, over the last eight or nine years, I have developed an outsource network, where we will subcontract the labor,” he says. “But, it’s very specialized; they’re certified weld inspectors and they have ASNT Level 2 credentials in both magnetic particle and ultrasonic testing techniques. So, it’s a very unique group of approximately 40-45 guys. And they’re all strategically located – Atlanta, Los Angeles, Louisville, Denver, New England, Nashville, Houston – most of the major metropolitan areas. We probably work in 45 states in any year and that’s doing mapping, condition assessment, as well as the guys involved in the weld inspections.” 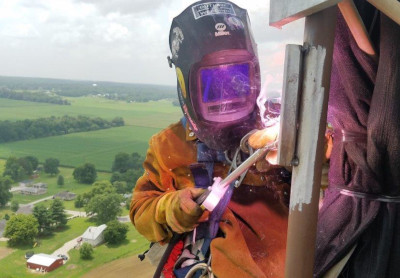 Reese adds that Reese Tower Services differentiates itself from the competition because of the quality of its work and “the accuracy of our deliverables.  We are able to respond quickly with the size of the subcontract network we have, and it’s worked for us,” he remarks. “We’re very good with the details and moving the pieces around on the map to make sure we’re accommodating our clients’ requirements. And, if you’re able to do that, you can be very effective with the subcontract model. If you don’t have good project managers and you’re not good with the details, you will get eaten up by a subcontract model.”

What also differentiates Reese Tower Services are Reese’s own credentials. During the time he worked in the tower business, he became Secretary of the TIA (Telecommunications Industry Association) Committee, TR-14, the structural standard for the design of towers in the U.S. He went from the there to Vice Chairman, and then Chairman of the Committee from 2006 -2012. So, he was able to leverage his unique background and a lot of experience in the tower industry. “If you’re going to retrofit old towers in the field, you’ve got to be familiar with them, in the first place,” he notes.

Of the four employees at Reese Tower Services, three are in the Reese family. “Jeremy Klapac, a well experienced communications industry veteran, is Vice President,” Reese says. “But, my daughter, Shelby, handles the office administration and my son, Cody, is our small unmanned aircraft system (UAS) pilot. The use of small unmanned aircraft systems (UAS) is revolutionizing many industries.  In the tower industry they allow us to access a structure and obtain better photos without climbing.  Anytime we don’t have to climb the structure, we are much safer and reduce costs by utilizing a UAS.  While there are limitations to what a UAS can do, they are another tool in our toolbox to provide the best solutions for our customers.”

In conclusion, Reese maintains that Reese Tower Services is able to “provide a unique product to support what the tower owners are trying to do .They’re trying to be good stewards with their structures so they can have them for many years and continue to lease space on them. So, their QA/QC (Quality Assurance/Quality Control) requirements have increased over the past few years. Tower owners were not as diligent years ago in keeping an eye on what was going on with their structures in the field. Today, they have very high standards of what they expect and what they will and won’t allow on their sites. They have increased the QA/QC requirements and we fulfill that goal for tower owners who are having work done on their sites and want us there to witness, verify, and testify what’s being done to meet industry requirements. We have the experience, the attention to detail, and a quality work product. We have a speed and quickness that does not sacrifice safety, and a unique product line that meets the needs of the communications industry.”

Check out this handpicked feature on Tri State Tower – Going Above and Beyond.

WHAT: A provider of mapping and inspection services to the tower and poles industries 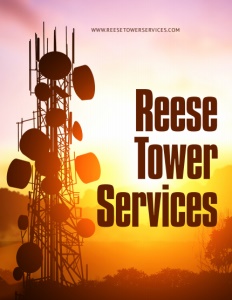