The City of Quinte West, Ontario is perfectly poised on the shores of the beautiful Bay of Quinte – gateway to the world famous Trent-Severn Waterway. Strategically located along the Highway 401 corridor, approximately 1.5 hours east of Toronto and 2.5 hours west of Ottawa, Quinte West is home to more than 43,000 residents, a proud military presence at 8 Wing/CFB Trenton, forward-thinking municipal leadership, and an overall atmosphere of positive community spirit. Quinte West was formed on January 1, 1998 through the amalgamation of the city of Trenton, the village of Frankford, and the townships of Murray and Sidney. Today, Trenton, the largest community, serves as the administrative and commercial center of this progressive Hastings County hub.

Quinte West, Ontario Mayor, Jim Harrison, has served on local Councils since 1991, is now into his fifth year as Mayor, and still farms a herd of beef cattle. To say Harrison takes an active interest in the community is a huge understatement. His focus is strong and steady on ensuring residents have access to healthcare, upgrading infrastructure, and working on a solution to the local affordable housing crisis. Giving an overview of Quinte West from an infrastructure perspective, Harrison reports, “We’ve done a number of upgrades to our infrastructure, going back to a major bridge on Hwy #2 that was built in 2010. We also started building a 375-slip marina that year, which finished in 2016, and officially opened in 2017. It’s a great asset to the city. We’ve also built a new fire hall – Station One – right downtown. The previous one was built in the 1980s but the footings were sinking. Because of that, and the new requirements, and expanded territory (increase in housing, etc.) within our own municipality, we needed a new fire hall desperately.

“We’re in the process now of building a new police station. When we amalgamated, what was Trenton Police went to Quinte West Police, and then changed in 2003/04 to OPP (Ontario Provincial Police). When the building was constructed in 1985, we had 28 officers and that was the maximum it was built for. We now have close to 80 working out of the same facility, so we’re building a new one of around 22,000 square feet. It will be a fantastic facility when completed for our first responders. And the OPP will be relocating their Highway Traffic Unit with eight officers. They will be patrolling a section of Highway 401 from the western boundary of Quinte West, Ontario to the eastern exit of Bellville at Hwy 37.”

The city is consistently making improvements to water and wastewater systems throughout Bayside, Trenton, and Frankford. They’ve added lines to feed Bayside from Trenton and Trenton from Bayside, and have a consulting firm examining the water and wastewater systems out of Frankford, due to a large amount of development around that village. Also in progress is a new wastewater line in Trenton that will come from the treatment plant on the east side of the river, across the river, and on the west side at Fraser Park. The Mayor admits, “We’ve been working on that since 2009 and it’s a big project. The sad part is that we went in 2012 and 2013 to get all our approvals for the river crossing and everything was fine. We went ahead with the project and were scheduled to cross the river in July and August, but in 2019, the federal Department of Oceans and Fisheries said we couldn’t do it. We made many phone calls and finally were able to make our case and thankfully common sense prevailed and we got the go ahead.”

The new wastewater line is part of a significant development project at the west end of the city along Hwy #2. Harrison explains, “Staicos Homes Ltd. controls 30 acres of land there and Nick Staicos is going right ahead with that housing. The demand for housing and living quarters here is going crazy. He’s also creating a shopping plaza on the south end of the property next to the highway, and then he’s going to build offices and some high-end investments. It will be a beautiful part of our city – it’s just in the beginning stages but Nick is the kind of guy that will make it happen, sooner rather than later.”

The Royal Canadian Air Force (RCAF) operates the majority of its fixed-wing, tactical airlift and all of its strategic, airlift aircraft from 8 Wing/CFB Trenton. 8 Wing is the largest employer in the Bay of Quinte Region with an annual payroll of more than $110 million, creating a significant impact in the local economy. Approximately 5,000 regular force, reserve force, and civilian members make up the workforce and the majority live in Quinte West, Ontario. “The whole Bay of Quinte Region is dependent on the base,” says Harrison, “and we are so thankful they are here. Along with being an economic driver, they take part in so many of our activities, from sports, to fundraising, support for the hospital and the Humane Societies – you name it they are involved. The Military Family Resource Centre is also a big part of our city, and they do a great deal of work for the people in the military.” 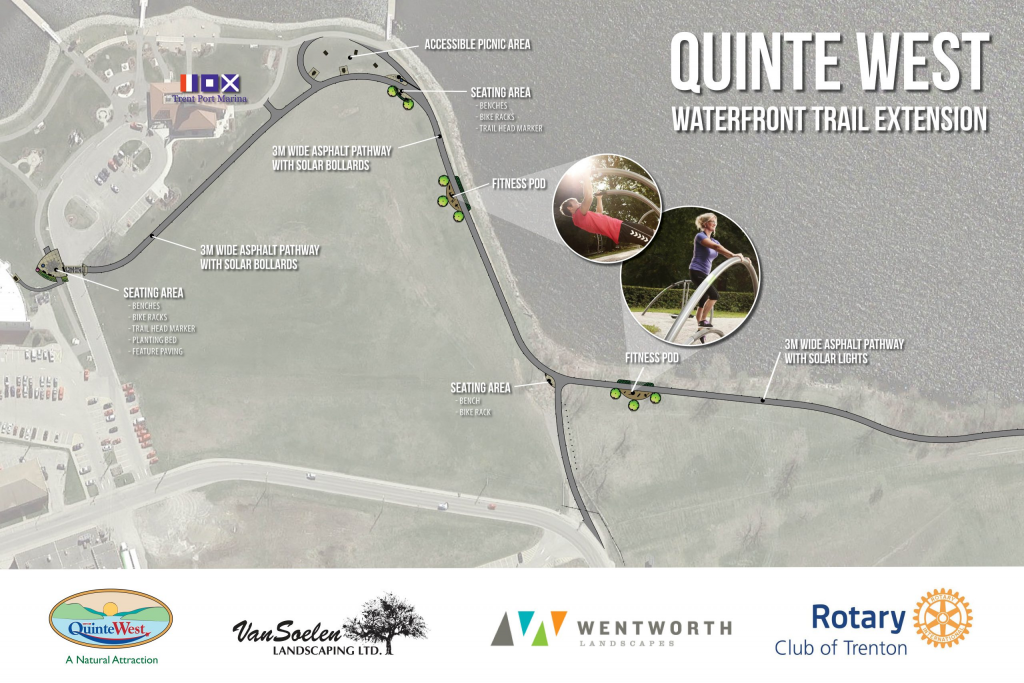 Business services, wholesale and retail trade, manufacturing (Domtar Cascades and Sonoco operate large paper mills), healthcare (Trenton Memorial Hospital under the purview of Quinte Healthcare), and social services round out the roster of major employment sectors. Tourism is another large economic driver thanks to a plethora of four-season outdoor activities tied into the city’s proximity to the Trent-Severn River and the Bay of Quinte. “Agriculture also plays a big role in our economy,” adds the Mayor, “and we’re thankful to the farmers for all their hard work and efforts to produce the food we all enjoy.”

Development in Quinte West, Ontario is experiencing a dramatic growth spurt. As Harrison attests, “It’s all good quality building. We have Young’s Cove over on Weller’s Bay – a big complex of about 400 houses; a condo project at Kingfisher Cove. Orchard Lane Development is just getting approval for another phase to complete that project. On the east end, between Trenton and Belleville, is Stonecrest Estates (Andy Geertsma). He’s building as fast as he can to keep up with the housing demand, and including apartments for seniors, as well. We have water out there but he built his own sewage treatment plant, and Bayside School can now buy into it. We’re building a six-bed community hospice across from the school and it will also be able to use that treatment plant.”

In the early 2000s, Quinte West, Ontario designated lands for development in its Strategic Plan and a lot of development is taking place on those designated lands in the west end of the city. The planning department and building department are extremely busy having to review and approve so many projects. From an environmental standpoint, greenspace is an important focus, including building a new accessible trail from City Hall at Trent Port Marina down to Research Castings that will be lit by solar lights.

“Another big concern here is high water levels,” Harrison states. “The increased water level of Lake Ontario is impacting businesses and homes. It’s a life-threatening situation because many homes adjacent to the water are dependent on wells and septic systems and the level of the water compromises the functioning of them. It also compromises the city’s water inlet and our wastewater plant because higher water can easily flood our system. Personally, I feel the situation we’re in is manmade, and can be controlled by man, and there are things we can do to mitigate this, but it has to be done within the next few years, before it’s too late.

“In 2017, we opened a new 70,000-sq.-ft. Operations Centre – a $22 million project which brings all our services under one roof and all our equipment inside. That makes a big difference to the environment because when people come to work, their vehicle is warm. Yes, they let it run while they do their safety inspection, but a warm motor doesn’t put out the negative emissions that a cold one does. When it’s warm it certainly burns cleaner. So that’s a big plus for us. It also allows us to regroup our work force, to provide a more efficient service at an economical cost. You constantly have to train people and make them aware of safety and also have them look at their work and their skills, and how what they do impacts the environment. Here in Canada, we are fortunate to have good water and clean air, and we all have to do everything we can to see that continues.”

Where: Bordering on the Bay of Quinte, Hastings County, Ontario