Soaring above the rest

Business View Magazine interviews Leonard Phillips, President of Phillips Tank & Structure, for our focus on the Strength and Growth of the Steel Tank Industry.

Phillips Tank & Structure President, Leonard (Lenny) Phillips, has worked in the industry since 1994, when he was fresh out of college. He recalls, “In  2012, I left my previous employer and started this company from scratch at that point. In the beginning, I had a few employees and we started doing some tank design work because it does take a bit of time to get going on the construction side, the field work. It wasn’t until late 2013 we were awarded and executed our first field construction – a tank repair project. Today, we are a tank service contractor, we do engineering, we also do field repair of tanks and new construction. And we’ve grown steadily; going from zero in 2013, when the field portion kicked in, to just short of $30 million in revenue in 2018. So, we’re doing a lot of things right, apparently.” 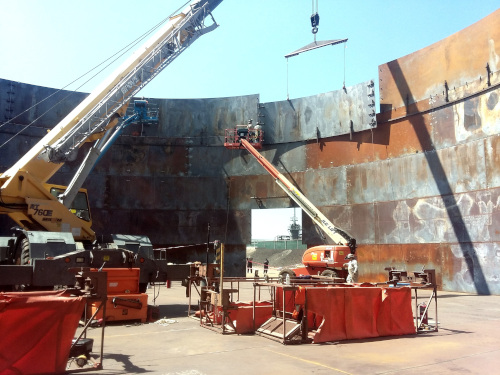 In terms of revenue, only three to five percent of the PTS business is design/engineering and the remainder is field work. The company has 130 employees on the payroll, about 100 in the field crews and the rest are based at headquarters in Braddock, Pennsylvania and satellite offices in southern California, and east Texas (Houston area) because their largest customer base is in the oil and petroleum industry. Field work is spread nationwide with active projects in California, in Texas, and on the east coast. The firm has done some design work for operations in Canada but no boots-on-the-ground construction. Phillips notes, “We’ve done work in chemical facilities, had some significant biofuels projects, also recent work in water and wastewater applications for municipalities. In those cases, we’ve been a sub-contractor to general contractors. We did some digester covers for City of Reading, Pennsylvania, and we have a similar municipal project coming up in Georgia. It’s steel plate construction work and that’s our niche. We don’t do the manufacturing, we don’t shop fabricate, we utilize sub-vendors to supply the materials for the projects.”

Most projects are anything but run-of-the-mill; for example: a bio-oxidizer at a Weyerhaeuser OSB (oriented strand board) plant in West Virginia. A Pittsburgh company approached Phillips Tank & Structure with plans for an emissions device that uses biological organisms to clean a waste stream of vapor from the plant. They wanted performance specifications, so PTS structurally designed, then had manufactured and fabricated this “tank with a stack on top” that used biological organisms in water to filter out hydrocarbons, etc. from a waste stream of air coming off the manufacturing facility. Using 3D design and engineering capabilities, they designed a structure to meet the geometry required, completed the project, and it’s been running successfully for a couple years.

The challenge for an engineering company is that different places have different climates and seismic issues. The west coast has to design for seismic events; Gulf coast and east coast for wind loading from hurricanes. In the north, it’s snow loads. All these factors, and more, must be considered. “What differs most from job to job is our customers,” says Phillips. “They are ever-challenging. Not any two projects are alike; they’re all custom.”

On the logistics side, PTS has a procurement group that utilizes steel service centers and fabricators, and supplies all the parts and pieces – gaskets, bolts, instrumentation. According to Phillips, “We’re, ideally, sourcing them from places local to the site to minimize freight, but we also broker our own freight to try to control the process. For us, maintaining control is important because we are continuously let down when we leave too much in the hands of suppliers. The logistics of a project is made easier the more we keep control. And we certainly have plans to do some manufacturing ourselves within a couple years.” 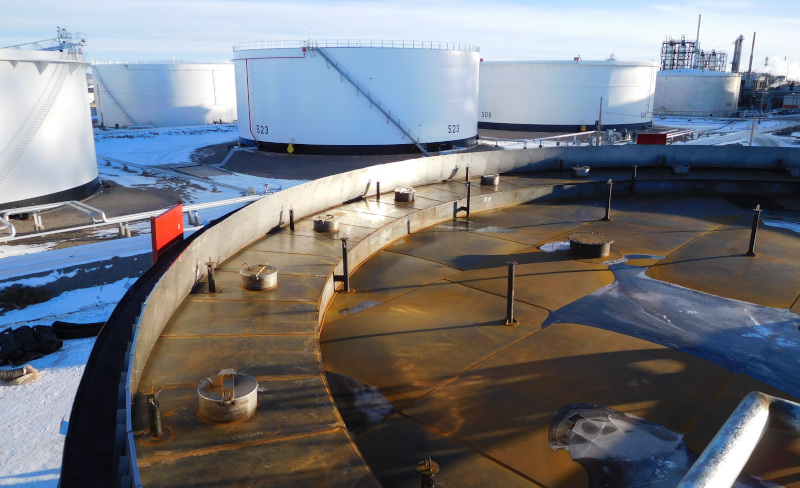 The difficulty of finding and maintaining a qualified workforce is prevalent in most every industry, but PTS has been very successful, thanks in part to what Phillips calls, “Good karma. One of the things I’ve found to be true in this day and age is that word gets around,” he notes. “I’ve heard from people in the field that strangers call in to our company and say, ‘I’ve heard good things about you. All the postings on Facebook say you are a good place to work.’ From that perspective we have a continuous flow of applicants. There’s still the major process of interviewing, sifting through, and watching very closely as they enter our workforce and seeing that they’re maintaining standards. So, inhouse training and developing the workforce is a major effort.”

The value of good, long-term relationships can never be understated. With respect to large customers, Phillips declares, “Marathon Petroleum has been a great partner. They’re the type of company we hope to latch onto – they’re big, they have lots of work, and they’re demanding but they’re very clear on their expectations. And they reward, they actually grade, very well. Meaning they take the effort to provide feedback. Based on the feedback, the grades, the scorecards that are given, they reward their top performers. So that’s been great for our company – it’s almost like guidance from a parent. Marathon have been of prime importance to us. Along the way, some smaller companies have embraced us. One called Pro Petroleum, based in Phoenix, has given us some very significant-sized projects that has helped in our growth. Not as big as Marathon, but those customers have been key as well.”

Phillips Tank & Structure is proud to be part of the community of Braddock. It’s a fascinating historic town and the site of Andrew Carnegie’s first steel mill – the Edgar Thompson Works – that is still operating. Phillips explains, “Braddock is right outside the city of Pittsburgh, but it’s heavily industrial and had a reputation as a very rough town. But it’s an amazing story because there’s an eclectic mix of industrial, with a brewery, with artists, with different things that are happening. We’re very tied in with Braddock and recently opened our second office here. We expanded beyond our current location and renovated the second floor of what was a duckpin bowling alley to become our design office. We moved all our engineering there last fall.”

As for other major initiatives, Phillips reports, “We’re going to keep growing without marketing. I’m a day-to-day estimator and project manager. We don’t go to the trade shows. We still don’t have a salesperson on staff. It’s all word of mouth. And we’re going to continue that way as long as we keep growing like we are. It’s almost scary to think of what would happen if we actually put people out there knocking on doors. And those who do get a chance to work with us, they stick with us. We started out doing engineering, always with the intent of being a construction company, a tank service company. But it’s the engineering component that has been surprising because it’s also been the engine of our company. It’s the difference. I think the industry has gone the other way and tank companies that were traditionally pretty strong in engineering, that had an engineer in the back room who’d been around for 30 years, those people have moved on, and a lot of companies have chosen to sub their engineering work out and maintain the bare minimum required. We’ve gone the opposite direction. We hire two entry level engineers every six months and we still can’t keep up, so there’s a need in the industry for engineering. And we’re a specialist in tanks, not a general engineering company, we just know tanks. So that’s where there’s obviously a void in the market and a need. That’s the fundamental difference we’re bringing to the market as a new company. A lot of new companies will say they’re leaner, they’re cheaper, they’re more responsive, that’s not our pitch. We bring the technical ability that others are kind of ignoring right now.”

Where: Headquarters in Braddock, Pennsylvania