The Orange County Convention Center – The center of hospitality

The center of hospitality

The Orange County Convention Center (OCCC) is the primary public convention center for the Central Florida region, known throughout the world as the home of Walt Disney World, SeaWorld, and Universal Studios among other tourist destinations.

In its entirety, the Orange County Convention Center features:

Recently, Business View Magazine interviewed Kathie Canning, the OCCC’s Executive Director. The following is an edited transcript of that conversation:

BVM: Can you recount some the history of the Orange County Convention Center?

Canning: “The Orange County Convention Center first opened its doors in 1983. Orlando, at the time, was very well-known for the theme parks, particularly Walt Disney World and SeaWorld. So the visionaries that helped develop this whole area and the tourism market in Orlando, had an idea that when the attractions were filled with the leisure guests and the tourists, on the off-season, wouldn’t it be nice to have the convention-goer, or the business traveler, who would keep the hotel rooms in the community filled most of the year, and keep people working and busy and drive economic impact?

“So, in 1978, a room tax was instituted at two percent and the Convention Center was built on International Drive and opened in 1983. I came in 1984, and, at that time, I started in sales and marketing and my mission was to help bring those conventions and trade shows to Orlando and Orange County. When I came, they were doing mostly consumer events: boat shows, car shows, gun shows, the circus – mostly events that drew only the public and that was because on International Drive the infrastructure wasn’t there to bring in the overnight visitor or the business traveler. We weren’t quite ready.

“So, plans were made to do an expansion in 1989, predicated on getting some hotel rooms near the Convention Center. The Peabody Hotel opened right across the street and that gave us our first headquarter hotel. The good news was, when the Peabody opened, it really did help drive business, and we started to do conventions and trade shows which is what our mission was. We were very successful and the market grew. So we expanded in 1997 and 1998. We were, then, a million square feet – one of the top three convention centers in the country. The road network and the airport continued to expand and business was very, very, good. So much so, in fact, that we did a market feasibility study in the late ‘90s and got the go-ahead to build Phase Five – doubling the space; adding a million square feet of exhibit space plus meeting space with the hope that the success of the Convention Center would bring more restaurants, more entertainment, more hotel rooms, and more business travelers to the community and the area. The Peabody is now the Hyatt Regency Hotel, we also have two other hotels, bookending the Convention Center West Building, the Rosen Centre and the Rosen Plaza and the Hilton Orlando attached to the North/South Building. We host conventions and trade shows, corporate business, some consumer and public-ticketed events, but our real mission is to put ‘heads in beds’ and bring people to Orlando and Orange County.”

BVM: Are you still being supported by the bed tax?

Canning: “Yes, in fact the bed tax, over the 30 years that the Convention Center has been in operation, has gone up to what it is now – maxed out at six percent. And that is collected off of 115,000-plus hotel rooms in this area, so it is a substantial amount of money and it goes, first, to pay off the Convention Center debt – the mortgage. We also do have a bit of an operating subsidy that pays for capital improvements in the facility. Also, a good portion of the money goes to marketing the Convention Center as well as the destination of Orlando.”

BVM: Most convention centers are not there to ‘make money,’ and some of them actually operate at a loss – especially centers that are owned and operated by a county or a city. Is that the case with the Orange County Convention Center?

Canning: “You are exactly correct. Our mission is economic development. So, if 10,000 attendees come to a show, we estimate that they spend approximately $1,970 per person for their stay. So, you would have over $19 million dollars that a piece of business would bring to the destination.  We’re not expected to make money. In fact, we do tend to lose and we budget for that. We do make money on things like parking, rental, food and beverage, rigging, utilities, but the maintenance of the facility – our electric bill, alone, is so astronomical that it’s virtually impossible to break even or to make money. We really look at the economic impact and keeping people in the community working, the ‘heads in beds,’ and people using the taxis, the restaurants, the shops, the attractions, and the golf courses.”

BVM: How many events do you have in a normal year?

Canning: “We host approximately 200 events each year. About 120 of them are in that convention/trade show category; large events – 5000-plus up to 100,000 attendees with large exhibits and meeting space needs.”

BVM: Some convention centers do a lot of local events: weddings, banquets, graduations. Do you?

Canning: “We do not because the hotel inventory is so strong that the hotels get most of that business, so we really go after the convention/trade show market as our primary objective.”

BVM: Are you competing with other centers of similar size, or other cities or locations for business?

Canning: “Well, it’s a very competitive business. We compete a lot with Chicago and Las Vegas, but we also compete with cities like San Antonio and Houston. It really depends on the event and what they’re looking for. We do well because we have the facility, the hotels; the customer service is very, very strong in Orlando, and at the Convention Center. We provide what a meeting planner is looking for.”

BVM: You mentioned that the Center has added more space to its footprint. Are there any further plans that might impact the way you do things – expansions, upgrades, new facilities?

Canning: “Over the past five years, when we came out of the last economic downturn, we saw that we needed to invest some significant dollars into renovating, replacing, and upgrading the infrastructure; a lot of the air conditioning systems, the fire alarm systems, and even the soft goods, themselves, needed some work. We are owned and operated by Orange County Government and the Board of County Commissioners approved $187 million for five years to do just that – renovate, replace, and improve the infrastructure that we have here on the campus. So that is being done and will probably be an ongoing and very strong Capital Improvement Plan.

“As for the future, we just completed what we call a ‘Campus Master Plan.’ We hired an outside company and they came in and worked with us for about a year doing surveys, doing feasibility studies, talking to our clients, talking to our stakeholders, talking to our competitors, and they have come to us with a template of improvements and expansion-type items that we can do in the next five, ten, fifteen years. So, we are now socializing that, prioritizing, and we hope to be able to go to the Board in the next year to get approval for some funding.”

BVM: In addition to upgrading their technologies, because planners are looking for the latest in Wi-Fi and lighting and sound, a lot of convention centers are also upgrading their sustainability practices. Where does the Orange County Convention Center stand regarding those types of initiatives?

Canning: In terms of sustainability, our newer facility, the North-South building that opened in 2003, is actually the largest Existing Building LEED-Gold Certified convention center in the world. We are constantly trying to be more efficient when it comes to energy, water and recycling. We recycle tons of waste from the show floor and public spaces, so we take it very seriously. We also have an initiative that works with all of our events and donates any leftover materials, food or supplies to local charities. Last year more than $2 Million dollars’ worth of supplies was donated by our clients.

“You mentioned technology. Yes, indeed it’s ever-changing. We host a lot of big, corporate technology events and they, needless to say, bring in a lot of their own equipment, but they also have high expectations of us. Our partner, Smart City handles our ISP and IT and they just recently put in over a thousand access points. With the amount of concrete we have, it was quite a feat to be able to increase the bandwidth.

BVM: Any big shows coming up on the calendar?

Canning: The National Association of Homebuilders in conjunction with the Kitchen and Bath Industry Show will be here In January 2017, and they’re calling it ‘Construction Design Week’ and they’ll have over a hundred thousand attendees using both buildings and about 20,000 hotel rooms. So, it’s quite an undertaking – the logistics – with the busing, the taxis, the airport arrivals and departures, the hotel rooms, and then the Convention Center, itself. We will probably have more than 20 million pounds of freight moving into the buildings. The show is open for four days and then it all moves out in less than a week. And we will get ready for the next event.”

BVM: It’s no wonder you’re called ‘The Center of Hospitality.’

Check out this handpicked feature on the BB&T Center – Home of the Florida Panthers.

WHO: The Orange County Convention Center

WHAT: The primary, public convention center for the Central Florida region

I-Drive Business Improvement District – The International Drive Master Transit and Improvement District d/b/a International Drive Business Improvement District (the “District) is an independent, special district created pursuant to Article VII of the Florida constitution and Section 125.01 (5) of the Florida Statutes through ordinances passed by Orange County, Florida and the City of Orlando, Florida. The District is charged with the responsibility of managing, coordinating and/or implementing several major initiatives that contribute to the current and future economic development for the International Drive Resort Area, which is comprised of a total land parcel count of approximately 10,387, encompassing 6,000+ acres. The District represents approximately $7.1 billion in Gross Taxable Value as of fiscal year 2015. – www.idrivedistrict.com

Enlinx – A passion for perfect delivery 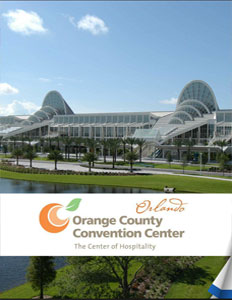