Township of North Bergen, New Jersey – All about community

Business View Magazine interviews representatives of the Township of North Bergen, New Jersey for our focus on Community Development in New Jersey Cities

The Township of North Bergen, New Jersey isn’t your average township. The 5.5 mile long and one mile wide city is a place where all levels of government, municipal department staff, police and commissioners come together to improve the quality of life for residents, workers, businesses and developers because they know when their constituents are happy and engaged the whole community benefits. 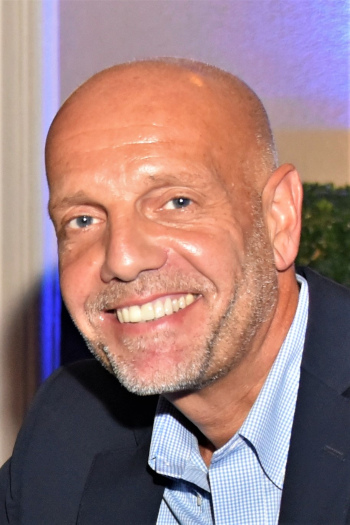 One of the things that makes collaboration and communication happen efficiently in the long, narrow plateau, is the longstanding tenure within the township of the elected officials and municipal staff of more than 500. Many of the officials have worked in the township (known as the second hilliest municipality in the U.S. after San Francisco), for 20 to 30 years. Chris Pianese, Town Administrator for North Bergen is very proud of the unique situation the longstanding government offers. He explains, “It’s very rare. What comes with that, and I think it’s one of the keys to our success, is the relationship between management and the governing body. They’re very supportive. We have incredible support from the elected officials and they allow management to run the town like a business. Having said that, we take advantage of this network of people they have assigned to different areas to report back to us any issues with quality of life and it’s that marriage between the elected officials and us that allow us to effectively improve quality of life.”

Not only does that marriage help the more than 62,000 ethnically diverse residents of North Bergen, but it also helps businesses and developers wade through regulations and red tape with an ease that is unparalleled. Louis Mont, CEO of Skyline Development Group (developer of the Solaia condominium building), is working through his first project in North Bergen after building in Hoboken and Jersey City for 40 years and feels his experience working with officials has made the project run smoothly. He shares, “The township officials have been very receptive. They’re very helpful, thorough, and meticulous, and also very welcoming. Unlike many communities it has been a real pleasure. Not just the inspectors but the whole building department really know what they’re doing. They’re familiar with the project; they process paperwork quickly. It’s an unusual experience to find people as adept at their jobs as these people are.”

The 14-story Solaia condominium building is currently under construction on Churchill Road along the Palisade Cliffs and will have 70 units. According to Pianese, “The boutique high end condo development has crazy views of Manhattan, it’s a beautiful building set to open in March of 2021.” Having township officials working with developers allows both to improve quality of life for residents. Solaia will offer a 10,000 square foot amenity space with a fitness center, a spa and sauna, a Halotherapy salt lounge, a vitality tub, and dressing rooms with lockers. The building will also have co-working spaces, a lounge with a fireplace wall, billiards, a cliffside roof deck with barbecue grills, a fireplace and dining area, while also providing an indoor catering kitchen and dining area.

The community of North Bergen, itself, borders 10 municipalities from Jersey City in the south to Bergen County in the north and from Meadowlands on the west to Manhattan on the east, separated by the Hudson River. The administration is committed to preserving and enhancing the community, including maintaining the skyline to give residents beautiful views of New York City while encouraging smart, sustainable growth. Mayor of North Bergen, Nicholas J. Sacco believes a community approach helps benefit everyone’s quality of life and pocketbook. He relates, “The township administration is business friendly and very neighborhood oriented. Our approach to construction is sensible. We’ve maintained our views of the New York skyline while limiting the height of buildings and not overdeveloping. Our aim is to keep communities intact and maintain stable taxes. Since I’ve been in office, taxes have stayed within the cost of living increase.” 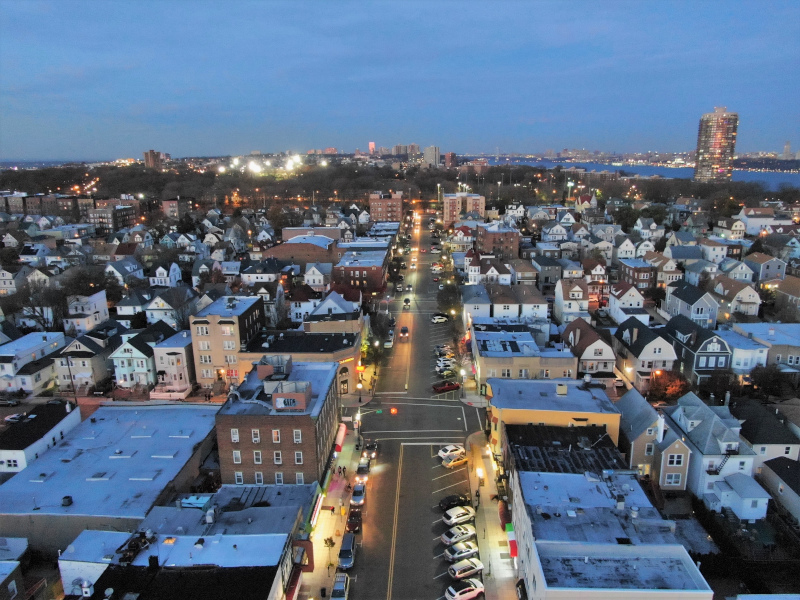 North Bergen boasts an easy commute by various methods of transit including bus, light rail, ferry to NYC, and immediate access to the New Jersey Turnpike, Route 3, and others but it also offers a large amount of small and large retail outlets along the Bergenline Avenue and Broadway Shopping Districts with many different businesses and restaurants. On Tonnelle Avenue, big box stores grew in the ‘90s – replacing massive trucking warehousing with a retail strip featuring a Target, Home Depot, Lowe’s, Walmart, BJ’s and more.
Mario Echevarria, president of Echevarria Industries, Inc. is also a local resident and developer of many projects in the area for more than 30 years. He has helped create a high-end E Plaza and Residences and his developments have won awards for their smart and green building initiatives. Pianese touted those awards and the E Plaza, “which is a rental unit development that’s a smart building that has keyless entry and a green roof.” The company is currently working to establish an arts district in town, complete with a museum in one of the buildings. Echevarria believes, “The proximity to New York is important, along with the topology of the area. We’re 240 feet above sea level. We have wonderful views, wonderful close-knit communities. It’s high density but a small-town environment. We have access to major highways, all modes of transportation, the Jersey shore, New York City for entertainment, Atlantic City. I truly think this is one of the best places to live in the country.”
North Bergen offers residents two libraries – a new, larger one is under construction – as well as two recreation centers, one of which will be connected to the new library. Community engagement is a key focus of the library, with extensive classes, events, and activities held onsite that include language and citizenship courses, sign language, arts, crafts, computers, homework help, kids’ story time, medical seminars, and more. The recreation department offers a municipal pool and sports and activities for kids including basketball, swimming, volleyball, tennis, football, cheerleading, wrestling, dance, music, pee wee leagues and summer camps. The township is home to 18 parks and 10 schools, which Echevarria believes helps make it more attractive because “we’re getting a lot of people from different states moving to this area. The job market is good. It’s a very easy reach by transportation. A lot of professionals are moving into the area, a lot of first responders, nurses, doctors, police officers, all kinds of different industries, a diversity of people and ideas. I think it will be even better over the next few years.”
The Township of North Bergen is the sixth safest city in the state and the 23rd safest in the country. Peter Fasilis, Police Chief, is proud of the fact that the township’s policy to only hire people who live in the community helps make their police force one of the most ethnically diverse in the country, and ensures that officers know and care about the community because many of them grew up in North Bergen. The recent crime rate has dropped so low that the police focus more on quality of life issues than criminal activity. They work with municipal staff to ensure residents adhere to property standards, graffiti is cleaned up within 24-48 hours, and they take care of abandoned properties to ensure there is no property damage and to improve the aesthetics of the community.

Fasilis believes in a preventive crime method, partly due to the broken windows theory. He explains, “If you have one factory with a broken window in it, if you don’t fix it, somebody else is going to come by, see that nobody cares about the building and they are going to throw another rock at it. And you’re going to have more broken windows. Then it’s going to turn into graffiti, and then it turns into a nuisance property, and then it’s going to be a crime generator. So, we really moved away from traditional policing quite a bit over the past several years because the traditional model of policing right now doesn’t work. You have to move beyond that. It’s not just fighting crime because if you’re fighting crime, you’re fixing the problem after it happens, so we’re trying to be preventative here.”

In the future, the goal is to maintain the safe, tight-knit community they’ve spent years working toward. “Continuing the momentum and safety of the community is our top priority,” says Pianese. “You want to complement the diverse community, it’s very, very unique and I think it is why we have been successful and why you look to the future to continue to complement that.”

What: A safe, diverse community; population 62,000

Where: Northern part of Hudson County

One of the bright spots in new development in North Bergen is Solaia, a 70 unit condominium project being developed by Skyline Development Group. With 40 years of development experience throughout Hudson County, Skyline set it’s sights on North Bergen for its next unique project.

According to Louis Mont, Skyline’s CEO, “North Bergen represents an ideal location along the Gold Coast, and Solaia’s location just off of River Road will give our buyers easy access to the Ferry and Light Rail as well as an astounding array of shopping and restaurants.”

The Solaia ethos is that of home as sanctuary, and nowhere is that more apparent than in the three-story Wellness center that serves as the centerpiece to the community. Owners will enjoy a state of the art fitness center, private changing area with owners’ lockers, and a fully equipped spa featuring a sauna, steam room, vitality soaking tub, and Himalayan halotherapy (salt inhalation) lounge with infrared beds. Solaia’s amenity package also includes a co-working space, resident lounge with billiards, demonstration kitchen and a 9th floor roof deck with grills and fireplaces.

“We are creating not only a beautiful home for our buyers, but a complete healthy lifestyle as well,” according to Mont.

Overlooking the Hudson River and New York City skyline, The Duchess offers luxury, waterfront apartments for rent in North Bergen. Spacious rooms, state-of-the-art amenities and interior design by Paris Forino makes The Duchess is the premier choice for living in the area.