A vital but often invisible criterion in economic development planning is the delivery model that gets selected to fulfill a county government’s economic development function. While some counties prefer to keep such services at arm’s length—either by “contracting out” to a dedicated economic development entity (a non-profit society, perhaps) or a development organization like a Chamber of Commerce, others rely on in-house solutions and personnel, through some combination of mechanisms like voluntary committees or planning departments.

For Nash County, a thriving community of 94,000 just 30 miles east of Raleigh, situated on the border of North Carolina’s Piedmont and Coastal Plain divisions, the recent decision to go in-house on economic development after a 20-year partnership with adjoining Edgecombe County, stems from the desire to facilitate a range of economic development and innovation ideas in order to ensure the growth of local businesses and further opportunities for its citizens.

Robbie Davis, Chairman of the Nash County Board of Commissioners, says it’s a venture that’s been a long time coming. “We made the decision last year, after considering it for about four years, to take economic development as a County department and go at it on our own,” he says. “We’ve already formulated that department, of which I’m an elected official—first Chair of the Board in Nash County.”

It’s a delivery strategy that had served the County well for many years, prior to teaming up with neighboring Edgecombe. “When we did it in-house before, we had a lot of success,” says Davis. “We’re ready to try it again.”

The Board of Commissioners sets the strategic direction and fiscal priorities of Nash County. Its existence is intended to encourage business and job growth, and to improve quality of life for its residents and taxpayers. “Thanks to Chairman Davis and the Board, we now have a well-funded economic development program curated by an experienced staff,” says Andy Hagy, Director of Economic Development. “We’ve got 100 percent support from the board of commissioners.”

In fact, Nash County has already initiated what Hagy hopes will be an aggressive, year-long digital marketing campaign that could go a long way towards sparking conversations about what the county’s bright future might promise. “The campaign will focus on our location between Research Triangle and I-95, on our quality of life, our local businesses, and our industrial properties,” Hagy explains. “Within six months, we’re up and running, and aggressively going after new businesses. The county’s new economic development strategic plan, which will soon be released, will provide a clear vision and road plan to build a sustainable economic future for Nash County.

Stretching out across the heart of North Carolina’s Piedmont, the Research Triangle is a metropolitan area with a population of about two million. Largely suburban in nature, it’s a unique area, in that rather than having one primary city at its center, the Triangle’s focus is split between Raleigh, the state capital, Durham, a former industrial center, and Chapel Hill, a prominent college town. The region derives its name from the major research universities in each of the Triangle’s three anchor cities, as well as the iconic office park – the largest, most prominent high-tech R&D campus in the U.S. – that sits between them. Created in 1959 by state and local governments, nearby universities, and local business interests, Research Triangle Park (RTP) is home to more than 300 companies (including GlaxoSmithKline and Cisco Systems) that collectively employ over 55,000 workers and 10,000 additional contractors.

“We recently announced our membership with the Research Triangle Regional Partnership, which is now a 12-county, regional marketing group,” says Hagy. “Because of our proximity to the Triangle, that was one partner we were seeking, and a goal which we’ve now accomplished.”

As for the I-95, it’s one of the oldest routes of the Interstate Highway System, and the main Interstate Highway on the country’s east coast, serving areas from Florida to Maine and major cities of the Eastern seaboard, including Miami, Jacksonville, Savannah, and Fayetteville in the Southeast. By way of this arterial road, Nash County provides convenient access to the Eastern corridor, to regions like the Triangle, as well as to major port cities such as Norfolk, VA, Wilmington, NC and Morehead City, NC. The new CSX Carolina Connector Intermodal rail terminal is minutes from all county industrial parks and sites.

Between its position along the I-95 corridor and at the intersection of I-95 (North/South) and US Hwy. 64 and US 264 (Future I-87) (East/West), Nash County offers outstanding transportation assets and easy access to supply chain resources. “We have a growing food cluster in the county, with names like The Cheesecake Factory, Nutkao (Italy) and Poppies International (Belgium),” says Hagy. “The area’s been developed and has transitioned away from the agro-textile community it once was, becoming an advanced manufacturing and pharmaceutical powerhouse owing to two of the largest employers like Cummins and Pfizer.”

The county is also targeting its marketing efforts on 500 acres of industrial properties. Two of those are industrial parks: the Whitaker Business & Industry Center a county-owned property on I-95, and the Middlesex Corporate Center, a 340-acre park just 25 minutes from downtown Raleigh. “In that particular park, we’ve got a 62,500-square-foot shell building that’s expandable to 100,000,” says Hagy. Another county-owned property is the 142-acre NC Highway 97 site on I-95 which recently received a Duke Energy Site Readiness certification. All are high priority properties for state incentives.

Nash County is served by Foreign-Trade Zone #214, located in southeastern North Carolina. The Foreign-Trade Zone program allows U.S.-based companies to defer, reduce, and even eliminate customs duties on products admitted to the zone. It also provides important benefits to businesses and industries such as federal and state tax savings.

“We’ve got areas of the county that qualify for New Markets Tax Credits and federal Opportunity Zones, such as the Middlesex Commerce Centre,” says Hagy. “That’s at the federal level. At the local level, by controlling many of the industrial properties, we have the leverage to discount the property for the right project, as it relates to jobs and capital investment.” The county also offers an investment grant – again, for the right project. “It’s a 50 percent reimbursement of tax revenue over five years.”

“There’s so much we want to emphasize,” he continues. “Our strategic location between the Research Triangle and I-95; our access to a workforce of more than two million people and talent to hire and grow within a 60-mile radius; our low cost of living and doing business; and our shovel-ready industrial parks, sites, and buildings. We’ve also got A tremendous, existing industrial base with powerhouses like Cummins, Pfizer and Honeywell Aerospace.” 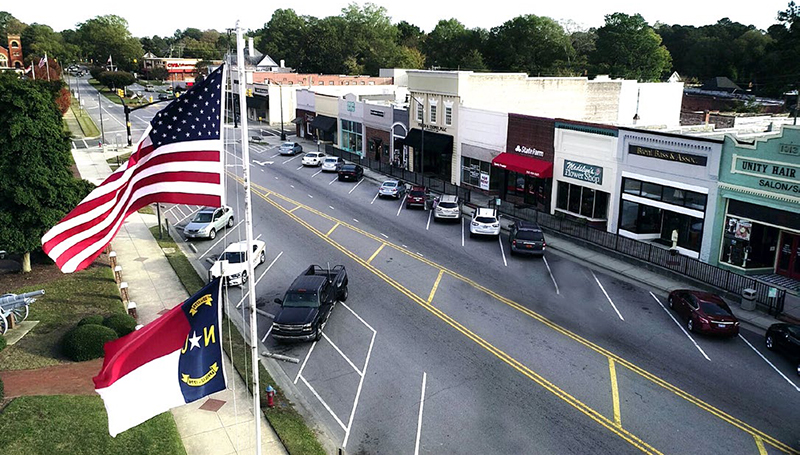 “We have an old textile mill — Rocky Mount Mills — that’s been redeveloped by Capitol Broadcasting Company out of Wake County,” offers Davis. “They’re centered around being home to the region’s only brewery incubator. They’ve also taken a section of the mill and turned it into apartments. A lot of new places have opened up down there. They’ve remodeled and put out for lease about 100 of the old mill homes. That’s currently our biggest redevelopment project. It’s been going on about three years now, and it’s doing very well.”

The 82-acre campus of the former cotton mill brings together commercial, residential, cultural, and entertainment amenities in a boldly restored, one-of-a-kind destination. Its Skylight Offices provide smaller companies with built-in WIFI, utilities, and conference space, while its well-appointed loft apartments and village homes offer a blend of historic and urban living—complete with panoramic views of the beautiful Tar River.

“You couldn’t ask for a better location than what we’ve got,” reaffirms Davis. “The Board of Commissioners is very eager to attract new businesses. This was a new venture for us. We kind of went out on a limb to go on our own doing this, and we’ll be doing whatever it takes to make it successful, moving forward.”

Launched earlier this year as part of its rebranding push, the Department of Economic Development’s new website, www.SelectNashNC.com, is sure to become an indispensable resource and online destination for all those interested in doing business with Nash County, NC.

WHERE: 30 miles east of Raleigh