A Vibrant and Welcoming Community

For Mayor Walter Stack, the Town of Arnprior Ontario is as close to heaven on earth as you can get. Located only 40 miles west of Canada’s Capital City of Ottawa, the town of almost 10,000 is a vibrant and growing community and the gateway to Renfrew County. Known as “The Town Where the Rivers Meet”, Arnprior is situated where the Madawaska and Ottawa rivers adjoin, and offers 4 seasons of natural splendor. With a strong industrial base, an expanding housing inventory, and a plethora of recreational opportunities, Arnprior continues to be, as Mayor Stack describes, “a very healthy community to live and raise a family in.”

Chief Administrative Officer Robin Paquette adds, “We are truly blessed to have one of the jewels of the Ottawa Valley right here in our town. The Grove Forest is an over 100-year-old white pine forest, owned by the Nature Conservancy of Canada and therefore protected. It is like walking into Algonquin Park when you walk into this 50-acre parcel right in the middle of town.” Connected to this forest is the town’s Robert Simpson Park, where a community beach offers residents and visitors a beautiful space to relax and unwind during the summer months.

A second beach is located in McLean Avenue Park, where baseball enthusiasts can take in a game at one of three ball diamonds. The Nick Smith Center offers two Olympic-sized ice pads, as well as a community pool, and is Arnprior’s main recreational facility. “On top of that, we’re blessed with neighborhood parks all throughout the town that have playgrounds, and sometimes ice rinks in the winter. There are lots of recreational opportunities, lots of trails through those natural areas and around the town,” says Paquette.

An investment of $10.5 million into a downtown revitalization project has brought vibrancy to the community, as Stack recounts, “The revitalization program was completed about five years ago. We updated all of the in-ground services as well as above-ground, with new widened sidewalks, new lighting, benches, trees, and all of the aesthetic things to really beautify the downtown. At that time, I would say that our store occupancy rate was somewhere around 65%, and now it borders about 98%. It’s really become a destination community because of that.” The charming updates to Downtown Arnprior also make it a perfect small-town backdrop, with several Hallmark and Christmas movies filmed on the main street since its rejuvenation. 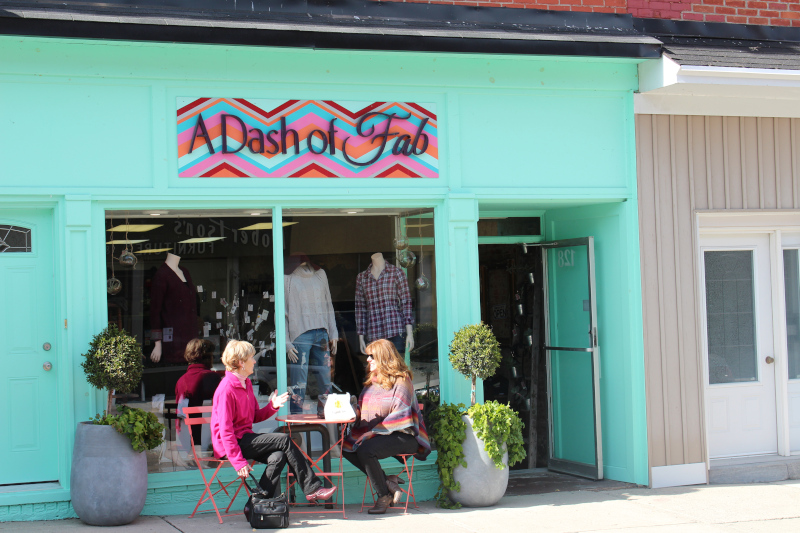 As the second fastest-growing town in Eastern Ontario, and 10th on the list of rapidly growing communities in Canada, Arnprior is experiencing major growth in the housing sector. “We have a number of very large subdivisions on the go, and our growth has been really dramatic in the last 10 to 12 years,” relays Stack. “Last year, we really hit a record with over 300 permits coming in, but it’s still very active.” Suggesting that COVID has changed the trends, he adds, “I keep in touch with the developers and who they’re selling to. It used to be 50/50 between local people upgrading their homes and people coming from the City of Ottawa. Now they’re coming from Vancouver or the Yukon. It’s just amazing.” Strong internet and proximity to the capital city add to Arnprior’s attraction as an ideal work-from-home location.

With no new apartment-type additions to the town for over a decade, Arnprior is excited to see the completion of the Sawmill Flats development, which will add two new buildings, at the entrance downtown. The Marshalls Bay Meadows subdivision, which is now in its third phase, will also bring a 60-unit apartment building to the community, along with a wide selection of single-family and multi-family options.

This centrally located development sits at the entrance to the town and will offer a variety of amenities for residents. Another project, known as Fairgrounds Subdivision is also underway, bringing over 150 new single, multi-family and townhomes to the community. “Fairgrounds subdivision is rightly named because for 160 years it was where the local Arnprior fair was held,” asserts Stack. “It’s right in the heart of town, and it borders right on the back of our Nick Smith Center for recreational purposes.”

Infrastructure improvements are ongoing, as Paquette reports, “We have a really robust road rehabilitation program here in Arnprior, and every year we try to maximize our dollars by trying to complete major infrastructure rehab on two streets at a time, right from the infrastructure up to the street level. We try to keep up that program on a regular basis to ensure our assets are well managed and up to date.”

Water and sewer capacity has been expanded at Arnprior’s treatment plants, in order to handle current and future growth with no concerns. “By doing those underground works we are constantly working on separating older storm sewers that enter into our sanitary system, to increase the capacity of our plant, and make sure it’s got what it needs for the new development that’s happening. So, that program really helps us with our capacity levels without having to spend major infrastructure dollars on an expansion of those plants again, in the near future,” she maintains.

Valued partnerships within Renfrew County are important for the Arnprior community, who rely on the county for a variety of transportation and health services, something that became even more important during the pandemic.

In the town itself, Arnprior Regional Health is a valuable resource. “That includes our hospital, family care teams, and the Grove Nursing Home that they operate, we work really closely with them,” explains Paquette. “We are an aging community, and we have a very robust Age-Friendly Community Plan. We work with the Our Seniors at Home Program, the Dementia Society, and a lot of organizations around providing services to our seniors to make sure that we’re an accessible community for our residents.” 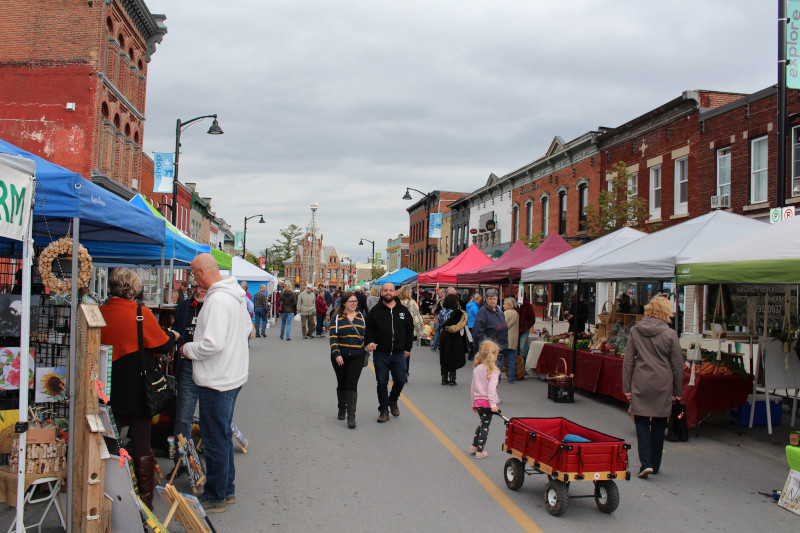 Partnering with the Seniors Active Living Center, the town is able to provide recreational and social opportunities, which she admits is “a very huge component for us as far as partners go.” As for other important relationships, Arnprior works in partnership with neighboring municipalities on what Paquette describes as “joint agreements on fire services and mutual aid, and we have agreements with our neighbors to provide recreational and library services to their residents at a reasonable rate.”

On the workforce side, Arnprior is home to several major industries, some changing hands through the years. “What’s interesting to me, is that while we had some industries move out of town or shut down, they sold to other corporations that kept the business going,” Paquette says, offering the example of Boeing, which had a huge presence in Arnprior from as far back as the 1950s.

“It had been sold to a company called Arnprior Aerospace which took over that industry and kept it going. Pfizer had a presence here for many, many years and it sold to Pillar5, which is another pharmaceutical company that took over and kept that business going. We’ve had several examples of that and have been very blessed that we haven’t lost any major industries other than Sandvik.”

Although the former Sandvik plant was shut down for several years, it has been reopened by MetaLigna, a modular home company, who have also relocated their corporate headquarters to Arnprior. Mayor Stack notes the significance of this to the community, offering, “The MetaLigna Group buying the Sandvik plant was really important because it was a serious environmental location due to the previous operations and chemicals. They did a lot of work with the province and built a 10-year remediation plan, and were then able to get financing and purchase that plant. They have 50 employees there, and in the next few years they expect to hit about 250 employees.”

Pillar5, another major employer, was recently bought by Parisian cosmetics company Anjec, which plans to keep the company open and expand its operations. “They see this as their entryway into the pharmaceutical business,” acknowledges Stack. “They not only bought the company, as their Pillar5 VP told me, but they also bought the company, the employees, and their 10-year future plan of doing business.”
Over the next few years, Mayor Stack sees a continued focus on the 20-year capital plan, conveying that infrastructure and redevelopment of the waterfront will be key.

“I think the growth is such that we’re going to have to look seriously at our recreation and other amenities in order to ensure that they not only keep up with the demand but that our programming is focused in the right directions for what’s becoming a much more diverse community than what Arnprior had been in its history.”

Adding her final thoughts, Paquette summarizes, “Growth is something that’s coming, and that we are embracing, ensuring that we are in a good position to provide the amenities that our residents are going to need over the next 10 to 20 years.”

The Town of Arnprior

What: A rapidly growing community 40 km from Ottawa

When it comes to top-quality built homes, having the expertise and long-standing proven experience separates the good builders from the very best. Established in 2012 and run by third generation carpenter Brent Mackie, Mackie Homes is known for superior craftsmanship, attention to detail, and a commitment to quality.

Mackie Homes boasts over 300 homes under its toolbelt in the greater Ottawa area, earning its reputation as a top-tier construction firm and as an industry-leading expert in building a range of homes from single-family to a selection of multi-unit dwellings. Offering differing home styles at reasonable price points, Mackie Homes has also developed a specialized working relationship with the beautiful and historic town of Arnprior bordering the nation’s capital. With the Provincial Government’s recently mandated ‘More Homes Built Faster Act’ Mackie Homes is looking forward to collaborating further with the town of Arnprior to provide a wide variety of homes.

Dedicated to a sustainable approach used in all their ongoing and past projects in the Ottawa and surrounding areas, Mackie Homes has committed to building further housing developments in the Arnprior area. This ongoing construction is another example of Mackie Homes’ sophisticated and affordable mix of housing options for the most discerning of buyers.

Orr Developments has over 30 years of development experience and owns over 20 acres of shovel ready land for all your development needs. In 2020, Orr Developments partnered with Hyde Construction to create Hyor Holdings Inc. Their latest project is Sawmill Flats, located in Arnprior, Ontario. These buildings consist of 118 apartment rental suites and an amenities building on the water.

Thomas Cavanagh Construction has been providing materials and services to customers in Ottawa and the surrounding area for 70 years. Equipped with a skilled team of professionals, 42 strategically located pits and quarries, and an expansive fleet of the best heavy equipment, Cavanagh has the quality and experience you can trust.