The City of Newburyport, Massachusetts has been a well-kept secret since the 1700s, full of resilient, kind, and welcoming people who have invested in their oceanside hamlet to ensure it maintained its rich history. The city’s government has always been quick to evolve to changing environment and society, while continuing to strive for advancement in green initiatives, economic development, infrastructure, and quality of life for residents and guests.

Newburyport takes a great amount of pride in its historical architecture and maintains diverse neighbourhoods, a downtown landscape with various art installations that detail their Indigenous roots, and the port city’s nautical background. People throughout the country and the world are discovering Newburyport as a travel destination endowed with beautiful beaches, boardwalks along the Merrimack River, walking trails, 26 parks, boutique shops, and ease of transportation within the community.

Long-time Mayor Donna D. Holaday has spent her 11-year tenure making sure the city of Newburyport continues to evolve into the best community it can be through quality of life advancements, infrastructure upgrades, investing in climate change preparedness, and much more. She shares, “Newburyport is a magnificent port community with a tremendous history. People fall in love with Newburyport when they come here because of everything it has to offer. I would say the last five years has really put us on the map; people want to be here to visit and to settle down.”

Strolling around the city today is an absolute treat for heritage lovers. The community was first settled in 1635 as part of the Newberry Plantation. In 1764, the recently established  Newburyport was the smallest town in Massachusetts, covering 647 acres. In 1851, it became a city – a thriving fishing, shipbuilding, and shipping center with a robust industry in silverware manufacturing. It had three shipyards and several ferries that carried passengers between Portsmouth, New Hampshire, and Boston. The captains of old Newburyport built beautiful mansions along High Street and were very active in the triangular trade, importing West Indian molasses and exporting the rum made from it. The distilleries were located around Market Square near the waterfront. The city once had a fishing fleet that ran from Georges Bank to the mouth of the Merrimack River and was a hub for privateering during the Revolutionary War and the War of 1812.

In the 1950s and ‘60s, Newburyport had a major economic downturn. According to Holaday, “The downtown looked like a war zone with boarded up buildings everywhere. The government decided to rehabilitate it by knocking them down but a group of citizens came together and worked with the Mayor at the time, Byron Matthews, and were able to convince the federal government, HUD in particular, that urban renewal could include preservation and didn’t necessarily have to mean a total gut. We are so fortunate that we saved these beautiful historic buildings. They were restored and we have been continuing to preserve our historic structures and protect our downtown.”

Situated just 35 miles north of Boston, the city is in a prime position for growth. However, Holaday doesn’t believe they can, or will, grow much more because there is no more land to develop. With the community’s popularity causing housing prices to rise, a new apartment building is now being developed to fill a desperate need for affordable housing. Newburyport offers a wide variety of job opportunities, from entrepreneurial shops and restaurants to a very prosperous and active business and light industrial park. Tourism is another large economic driver for the city, in part because of their beautiful downtown full of interesting shops and more than 36 restaurants throughout the community. There are numerous outdoor activities for cyclists, walkers, joggers, families, and water sports enthusiasts, as well.

The President and CEO of the Greater Newbury Chamber of Commerce, Frank Cousins, knows there are many draws to the city. He recounts, “Newburyport is unique, where it’s not a huge land mass. Since it was laid out back in the early 1700s, everything flows off of High Street down to the river. It’s very walkable, very easy, we have great new bike and walking paths that the Mayor has really expanded and completed down to the river from our train station. It’s got a great access point. The key is it’s a great city to walk, we are not overrun with traffic. Newburyport is kind of a hub of outdoor activity for the Greater Newburyport Area.” 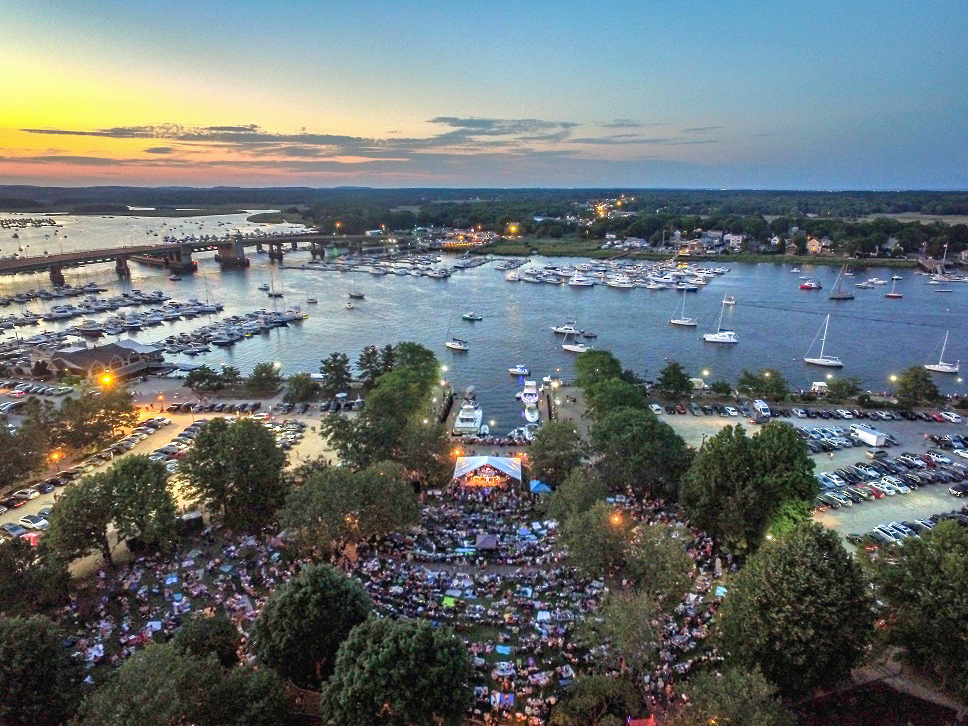 Newburyport officials were committed to Massachusetts’ Smart Growth plan for creating mixed-use hubs near public transportation, focusing on replacing the jumble around the MBTA rail station with an attractive hub of housing and retail that would fuel economic development. With Minco Development’s planning and development experience, and acquisition of a key parcel from the MBTA, in 2016, the Planning Board unanimously endorsed Newburyport Crossing: “This project’s architecture, landscaping, lighting, and pedestrian-oriented spaces have been designed to create a livable and vibrant new center in Newburyport… and greatly enhance the character of this underutilized area.”

Two years later, the development officially broke ground. Now, the first residents are inking lease agreements for their new apartments, as Newburyport Crossing finishes its first of three apartment buildings at Rail’s End. In the meantime, MINCO is evaluating the remaining pieces of Newburyport Crossing. The reimagination of this neighborhood is off to a strong start.

Not only was the downtown saved after the economic downturn in the ‘50s and ‘60s, but the city diversified its economic base, so residents wouldn’t be reliant on one industry only to end up in the same dire situation. Because the factories had been set in residential areas, a business park was created, and Holaday just spearheaded a major overhaul of its roads and infrastructure. A long-time resident of that business park, Strem Chemicals, manufactures and markets specialty chemicals for academic, pharmaceutical and government research. Holaday notes, “The company founder, Mike Strem, has given so much back to the community… internships, he donated money for a STEM lab at the elementary level, a robotics lab, and he gave 3D printers. It’s wonderful to have business leaders like this who not only are stable in terms of our economic base and continue to grow, but they also really give back to our community.”

Cousins adds, “The business park is vibrant right now. People feel great about the water and sewer infrastructure. It’s a very strong area and it’s at the entrance of the city off of I-95, so it’s got good access. The city is very diverse from that standpoint – you have the tourism piece where you can rely on restaurants, bed and breakfasts, and the downtown business district, and we really created a new area out at the rails and right at the corridor.”

The Route One District is another business center. It’s home to Newburyport Brewery, which puts on concerts, has access to the bike paths, and is working with the municipality to open a pop-up tent downtown. Cousins says, “These breweries are very popular, our new Vice President here at the Chamber worked at one. It’s great because people like it and it brings a real nice flavor to our downtown and gives a good selection.” The cannabis company, Happy Valley, is also building its headquarters in the business center. Construction is about a year behind due to a delay with materials because of the pandemic, but Holaday is excited to tour the facility once it gets back on track.

Newburyport has felt the grip of climate change with more frequent and serious surge storms coming through, so the administration took steps to mitigate the risk to the city. They joined a state program called Green Communities and applied for grants that helped upgrade their street lights and install EV charging stations, among other initiatives. Holaday put together a resiliency group with members of government and the community and created an action plan, which they are currently working through.

The city also invested $34 million to upgrade the wastewater treatment facility to protect it from flooding. In addition, they joined another state program called the Municipal Vulnerability Preparedness Program and started identifying where they were most vulnerable. As part of that effort, they just received a $1 million grant from the state to build infrastructure along the river to protect the wastewater treatment facility. One of the challenges Newburyport is facing is the erosion of Plum Island. Ten years ago, the city did work at the mouth of the river and it changed the erosion patterns. Next they plan to dredge the river and use the sand to build up the island. Holaday acknowledges they are working to fix the issue, noting, “We are definitely seeing the impacts of climate change and storm surge in our city.”

Built on a rich Maritime heritage, the importance of family, and hardworking local business owners, Newburyport is one of those special places that simply warms the heart. Come visit and experience a lifestyle that is second-to-none. You may just want to stay.

Where: 35 miles north of Boston, MA

MINCO is New England’s community-focused development
company. Cities and towns throughout the region count on us when their vision
for a new tomorrow needs a developer who knows how to navigate the process
and manage a plan with the care required when a community dreams big.