The Key to Connectivity

NAV Industrial, a provider of cellular services to wireless companies throughout the southeastern United States, began about 15 years ago in the garage, basement, and pickup truck of J.D. Newsome. “I started out with a 75 thousand dollar loan and a dream,” Newsome says, “and my trusty companion, a bull terrier named Toby. And pretty soon, he became more famous than I was with all of our travelling.”

Today, NAV Industrial, which is based in Roanoke, VA, has 35 employees who service the entire states of Virginia and West Virginia, western Pennsylvania, western Maryland, eastern Kentucky, and eastern North Carolina. Its customers include Verizon Wireless, U.S. Cellular, T-Mobile, nTelos, Sprint, and some local, public service agencies, who all rely on the company to keep their networks operating at optimum capacity and condition. “None of the major carriers in the U.S. have employees to do the grunt work, so to speak,” Newsome says. “They have a couple of guys they call ‘cell techs’ and those guys just go out and determine whether or not they need to call in a team like us.”

The company’s tower services include inspection, signal testing, pro-active troubleshooting, and tower, site, landscaping, and lighting maintenance. NAV Industrial also provides in-building cellular network services, because there are many physical objects – such as granite, marble, stone, concrete, metal roofs, steel beams, and even energy-efficient windows – that can interfere with the transmission of RF signals into a building. “We take the same reception that you would get outside and we bring it inside. We install a Distributed Antenna System (DAS) which re-transmits the communication. That’s one of the reasons that people are able to use their cell phones in larger buildings, like warehouses and hospitals.”

Newsome says that NAV Industrial separates itself from competing firms because of its exemplary service and quick turn-around times. “Usually, we’re able to get a maintenance call within 48 hours and we have an emergency service department that can get to calls, sometimes, in two to eight hours,” he states. The company’s good service is key to getting and retaining clients. “We keep a good rapport with our customers and that brings work in,” he adds.

Key to that good service is hiring and training good people. “We’re trying to find the right people to fit in the slots that we need,” Newsome says. “People are what’s important to make us who we are. I don’t want employees here; I want people who are part of a team and have that team mentality. If you have team members who feel like they ‘own’ the job, then they’re going to do a better job for the customer and that’s what pays; that’s what keeps the customer continuing to use you.”

Regarding the work that NAV Industrial does outdoors on high towers, Newsome says, “It takes a different breed of people to climb towers and deal with the type of work we do. You have to find a special individual who has the ‘grit’ to do the job.” Newsome, himself, continues to work alongside those special workers, eschewing the safety of the office in order to stay involved with his team. “My desk is a MacBook Pro and a pick-up truck,” he says. The word is, he also has a new dog.

Check out this handpicked feature on GCP Industrial Products – Your catalyst for growth.

WHAT: A provider of cellular services to wireless companies 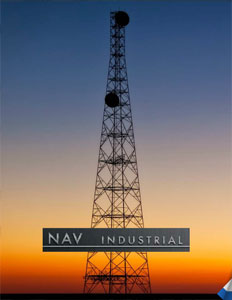