Millbrae, California – The gem of the Peninsula

The gem of the Peninsula

The indigenous Ohlone people were the first to steward and walk the coastal hills and scrubland of the parcel of Earth now known as Millbrae, California. A peace-loving tribe, they mostly subsisted on the shellfish they harvested from the San Francisco Bay. Today, Millbrae enjoys the same sun-warmed landscape and is still just as bountiful a provider, albeit in different ways. Located at what is now the heart of one of the most dynamic economic regions in the country, it’s become a residential enclave simmering with entrepreneurial talent, opportunity, and all the contrivances to support suburban-to-urban development.

The basics for which Millbrae is known – hills, houses, and sunshine – are just the foundation for the real meat of the meal involving the city’s mobility ecosystem. The nerve centre of the Peninsula’s public transportation network, Millbrae truly is as the intersection of conveyance, providing easy and direct access to the San Francisco and South Bay region by rail and freeway, as well as foreign and domestic destinations via the San Francisco International Airport (SFO).

“Geographically, we are a key municipality in the success of the Bay Area,” acknowledges City Manager Tom Williams. “We have the largest intermodal transit terminal west of the Mississippi that serves Bay Area Rapid Transit (BART) and Caltrain. And, of course, there’s our proximity to SFO. Our area is so ideally suited that you can work in San Francisco, you can work in Silicon Valley, San Jose. You can work in the East Bay over in Oakland, or right here in San Mateo County.”

It’s true that Millbrae trades on its location in a big way. Its scenic setting, cradled amidst hills that separate the Pacific Ocean from the San Francisco Bay, promises even more qualities that make it a uniquely charming place to live. “It’s not just the great weather and the great connectivity,” offers Community Development Director Darcy Smith. “We have a lot of interest in housing development here because we have really excellent schools, parks, and trails. Those are important factors in the decision about where to live but also where to work, because when you work, you like to get out in the fresh air. We also have a sizeable daytime population that frequents our downtown restaurants and uses our recreation facilities.” She adds that the new Millbrae Recreation Center, scheduled to open in Spring 2022, was sized to accommodate growth in the city’s workforce, and they just opened their Fitness Court.

The roughly 0.2-square-mile area surrounding the BART and Caltrain station is being envisioned as a hub of daytime and evening activity. New housing, hotels, and office space are anticipated to enhance the vitality of the city’s centre beyond traditional working hours. 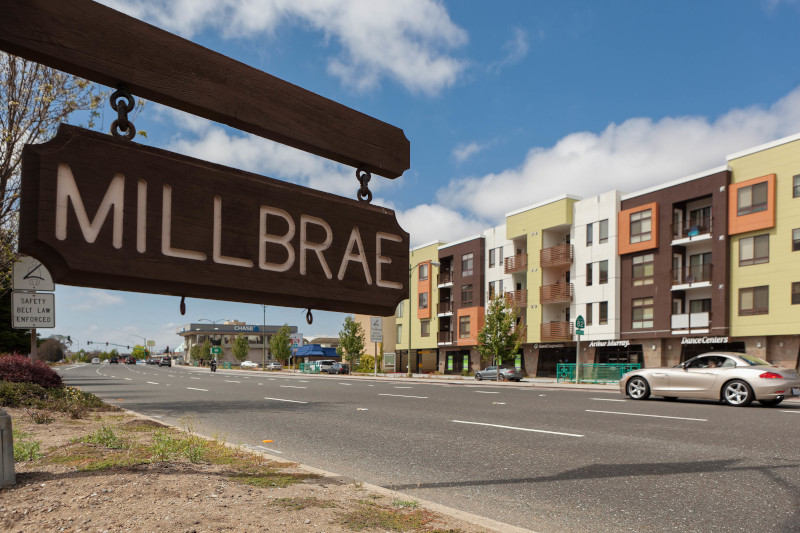 “The City of Millbrae has a vision and we’re implementing it,” states Williams. “The art of planning is in getting all the puzzle pieces and putting them in the right place. Currently, we have 400 housing units under construction and the council approved another 488 units. This is all happening around the BART station. With Darcy and her group in Community Development, we’ve embarked upon a comprehensive update to our General Plan that includes both Housing Elements and Land Use Elements. Because we’ve traditionally been a bedroom community, we do have a lot of under-utilized land that we’re now putting to work. So, everything is fitting in its right place.”

The Housing Element update is a once-in-a-decade chance to help shape Millbrae’s future as a residential community. With just about every city in the region being required by the State of California to plan for more housing than they have in the past, Millbrae is focused on hearing from community members about what they need, what they love, and what they’d like to see more of. Williams explains, “Housing and Community Development… at the state level, they establish goals for each municipality through each region’s council and government. It’s then up to our region and, in our case, the Association of Bay Area Governments (ABAG), to decide how much of the regional need should be met by each city, town, and county. Our new number is 2,200—that’s 2,200 housing units between 2023 and 2030.”

While some cities with similarly high numbers are fearful of what lies ahead, Williams feels heartened by the drive and dedication behind Millbrae’s transit infrastructure spending. He maintains, “These transit corridors and the densities that City Council is already projecting – we’re going to be able to accommodate all that and become urbanized in the right kind of way. Quality of life, that’s a value that is obviously very important as we proceed with the planning and build-out process. And I guess ‘build out’ is the appropriate term, right? Millbrae is a community that isn’t built out like some cities are. We’ve only just started that process.”

In June, the Millbrae City Council also met with the Planning Commission to discuss the city’s long-term blueprint for developing the downtown core and the El Camino Real. A main objective of the plan is to enhance quality of life in Millbrae by providing a roadmap for future growth that would emphasize transit-oriented, mixed-use development to create an exciting place for people to live, work, shop, and visit. 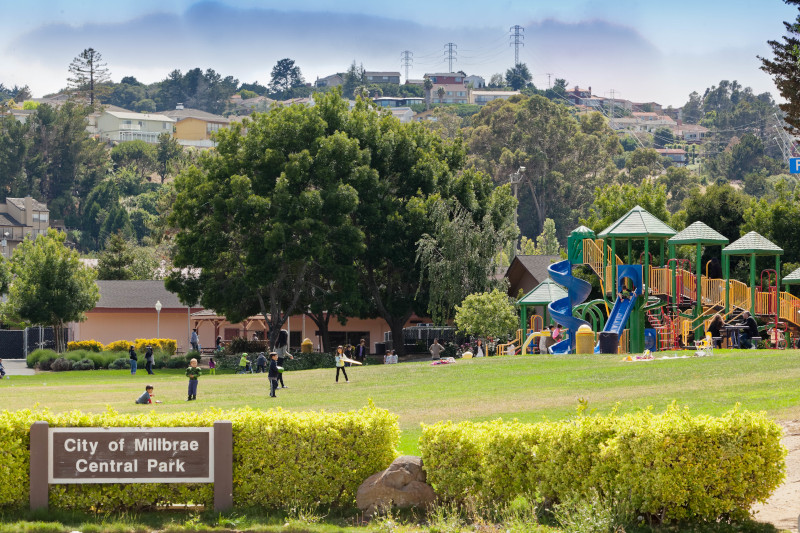 “We already have a lovely downtown area – that’s where our festivals take place – and it really feels like the city’s front porch,” shares Smith. “It’s where we entertain, host gatherings, and have dedicated dining spaces. We hope to improve it with public art and wider sidewalks, but we’ve already got routes in place through Broadway Street, which has these iconic palm trees and beautiful lights. I would say that our downtown is mostly small storefronts and great, diverse restaurants. We also have a produce store and a really successful meat store that shares a retail space with a wine shop. We really want to serve our community so that they don’t have to leave and shop elsewhere. That’s one of our economic development goals,  as well as just a sustainable community goal.”

“We’ve got several buildings right now at the downtown’s north end that actually would be perfect for an incubator,” says City Mayor Ann Schneider. “We also have an antiquated post office that should come back as a multi-story corner building with a nice opening for business opportunities.” She adds that Millbrae is embracing what they’ve learned from the booms in Silicon Valley that ignored commuter-adjusted population estimates. “The multimodal transit station is where the bulk of our growth is happening. I think that as we grow, along El Camino and by the transit, we’ll be able to keep employees happy while building stronger community alliances.”

With a younger population moving in and more families setting down roots in the community, the city is seeing its demographic shift and seizing all the opportunities that presents. As Schneider attests, “We have many families, and sometimes couples who just haven’t had kids yet, where one works in San Francisco and the other works at maybe Facebook in Menlo Park, or Adobe down in San Jose, or Google in Mountain View. So, we’re approving a healthy mix of 3-bedroom, 2-bedroom, and 1-bedroom studios with an emphasis on residents living in Millbrae being able to afford to stay living in Millbrae.”

According to Smith, Millbrae’s layout is very sensible in that the city’s neighborhoods are predominantly situated west of El Camino Real, with the commercial and office centers all on the east side closer to good freeway connectivity and transit. “We’ve got 826,000 square feet of Class A life science lab space that will hopefully break ground next year,” she says. “And then, as we’ve mentioned, we have a lot of housing that’s being built. What we’re striving for is an equilibrium. We grow on the commercial side and we add employees, and then we grow the housing so that they’re balanced out.”

“It just falls down to good planning and design,” says Schneider in conclusion. “The City of Millbrae itself is 100% renewable energy. We’re our own provider of electricity. We’d also like to be the first city to really commercialize potable water. I will tell you, on the environmental side, we are right in there.”

Commercial real estate investments require extensive knowledge of the financial, legal, and regulatory aspects of buying and selling property, which is why you need a partner you can trust. Chicago Title’s National Commercial Services team has over 165 years of underwriting experience with industry experts that assist with a multitude of commercial services throughout the nation.

Our team in San Jose has built a reputation for efficiency in processing complex real estate projects and are equipped to aid in each step of your transaction. Branch manager, Sherri Keller, is an industry veteran with over 35 years of combined title and escrow experience. She has a thorough knowledge of HUD, TIC, defeasance, and portfolio transactions. Sherri is well versed in working with a variety of client types on their unique and often multifaceted transactions. She is experienced at handling many escrow specialties including national commercial transactions, multi-family, retail, office, and industrial properties. With 20 years of experience as a title officer, she can easily anticipate the needs of her clients and work directly to solve any title issues.

Contact Sherri today at (408) 993-2325 to learn more about the products and services we provide at Chicago Title National Commercial Services. 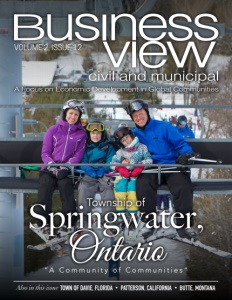