As problem solvers whose craft is intrinsically bonded with the natural world, architects often find themselves the catalysts and harbingers of sustainable development. That legacy is exactly why Texas-based firm Lake|Flato operates under the premise that good architecture begins with the end in mind, and that good buildings respond meaningfully to the environment in which they occur.

Headquartered in San Antonio, with a second office in Austin, Lake|Flato’s reputation was strengthened on the backs of simple, contemporary homes designed for West Texas in the mid-‘80s. “Ted Flato and David Lake had previously worked for the legendary O’Neil Ford at Ford, Powell & Carson,” says Associate Partner Todd Wascher. “They broke off and started a series of ranch homes – really nice homes with regionally-cut types of architecture that fit the climate and the landscape. Slowly but surely, they began to take on larger projects, commercial projects, that took them to places beyond these initial residential designs.”

Lake|Flato today has been in practice nearly four decades and has a staff of about 130, including 50 registered architects, 42 LEED-accredited professionals, and a Design Performance team made up of industry leaders dedicated to advancing best practices in sustainable design and technology. Ten partners empower the teams that lead each project from concept to completion, and collaboration with clients and consultants lays the foundation for all their design and creative work. “We’re all over the country now,” Wascher announces. “We have projects in virtually every state. We even have some hospitality projects in Baja California Sur, Mexico, and the Caribbean.” 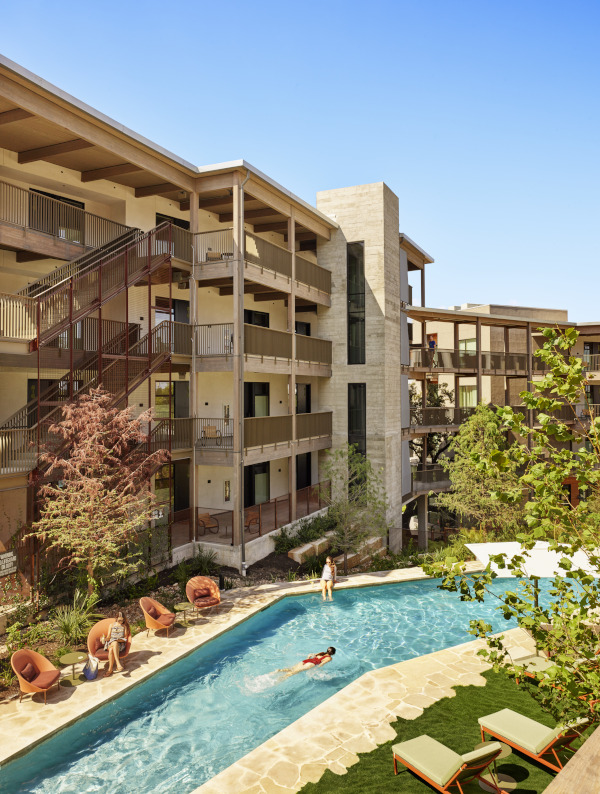 Few design firms are as celebrated as theirs – Lake|Flato Architects are the winners of more than 300 international, national, and regional awards, and placed 1st in Architect Magazine’s 2019 Top 50, an annual ranking of the best U.S. firms. Even with all this success, Wascher says the firm still loves to do those “really nice, really fun” Texas ranch-styled homes, but admits that they regularly turn their attention to other market sectors.

“Our office is broken up into several studios,” he explains. “We have a higher education studio that deals with college and university projects. We have a K-12 studio that primarily focuses on grade school learning environments. We also have studios that exclusively handle commercial developments, which is the studio I support. We do hospitality projects, office buildings, civic/cultural facilities, and corporate headquarters. We design large-scale master plans like the historic Pearl Brewery complex here in San Antonio. We also have our Eco-Conservation studio, which concentrates on nature conservation and nature centers.”

Despite the varying kinds of design activities involved, there’s a common thread uniting these projects: each team employs an integrated design approach to synthesize goals for design, sustainability, engagement, and equity – identifying priorities and building momentum from the very beginning of the project. Lake|Flato employees choose strategies and technologies that have the maximum impact, through a process involving design workshops that overlay environmental context onto sustainable building programs.

“It’s really a conscious effort to reduce our impact on the environment,” Wascher says. “We always strive to think about different ways of building that are sustainable.” He goes on to explain how the traditional steel and concrete construction that shape much of our built environment have a massive carbon footprint: “When you think about the primary sources of greenhouse gas emissions in the U.S., the building industry is responsible for almost a third of that pollution. What solution could we, as architects, provide to address that problem? The answer to that question is really why we moved into mass timber.”

In addition to being a renewable resource with lower extraction and processing impacts than steel or concrete, the inherent aesthetic appeal of wood also makes it an attractive building material. “That’s the other reason we started using it,” Wascher says. “We were doing small homes that were beautiful and incorporated lots of naturalistic features. Wood being closer to that materiality, it gave the architecture more of a human touch. Ultimately, we wanted to bring that same design sensibility into the commercial sector as well.”

Lake|Flato’s commercial projects have historically stood out because of the ways in which they engage their environments and honor the rituals that take place there. But two of their more recent designs – the six-story Soto Building in San Antonio and the eclectic Hotel Magdalena in Austin – are garnering recognition for making mass timber the rising star.

“The Soto clients approached us to do up a master plan for them,” shares Wascher. “They owned eight city blocks just north of downtown San Antonio, and their first phase was to create an office building. We actually priced the building as either concrete or wood in concept design. For our purposes, we really wanted to push the use of mass timber for it. The owners had their own reasons for agreeing to let us build it that way. A bunch of standard-looking office buildings were coming online in San Antonio, and they wanted to be able to entice people to come to work in a different type of environment. Of course, they also loved the idea of reducing the carbon footprint as well.”

The building is Texas’ first mass-timber office building and offers a vibrant mix of ground floor commercial retail, multi-tenant office spaces, and below grade parking organized around an open courtyard. A two-story porch wraps one corner, yielding views along Broadway Street, one of the city’s main thoroughfares. Lake|Flato served as the design architect, collaborating with Architect of Record BOKA Powell 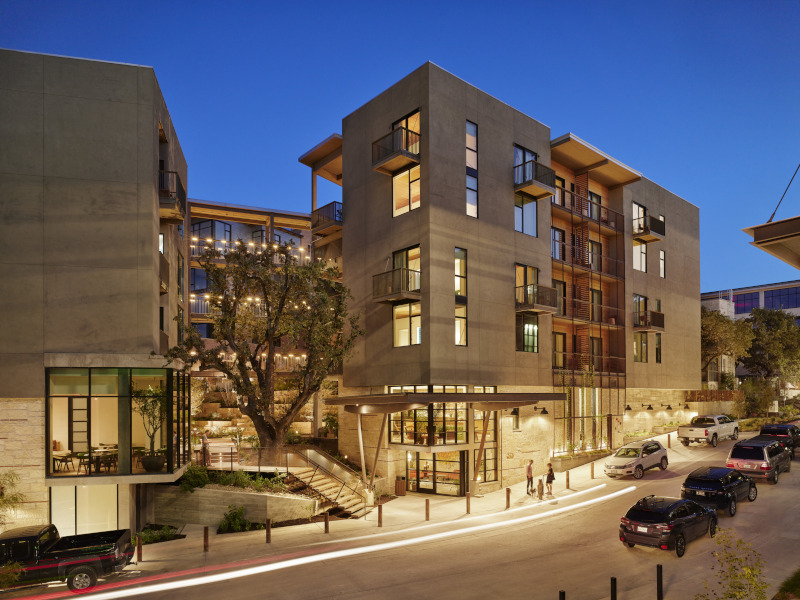 “StructureCraft out of Vancouver, Canada did the structural engineering for the building,” Wascher says. “They manufactured the floors and roof systems using a system called DLT, which is dowel laminated timber. It’s basically 2x4s, or 2x8s in our situation, laid out vertically. They take dowels and pressure push them together, and that’s what makes the panels hold together. The system works out really well. We were able to get great spans.”

The firm also worked closely with StructureCraft on the Hotel Magdalena project through the schematic design, design development, and construction development phases. “Hotel Magdalena is located on the former site of an old hotel from the 1950s – the Terrace Motor Hotel,” explains Associate Sophia Razzaque, who served as the Project Architect on the South Congress Avenue project. “It used to take up a larger site – there were multiple plots of land and over 300 keys for the hotel. Willie Nelson ended up buying the adjacent property and turning it into the Austin Opry House, which was basically a live music venue. Musicians used to stay at the hotel and I think, over time, it just got run down.”

Lake|Flato’s five-building complex design was influenced by the existing heritage Live Oak trees on the site, which became the focal points for outdoor gathering spaces and private suite gardens. All rainwater on the property is collected in underground cisterns and is used to meet the irrigation demands for the landscape, which emulates the spring-fed rivers in the Texas Hill Country surrounding Austin.

“It’s an 89-key hotel and it opened October of last year, during the pandemic,” Razzaque shares. “We kind of joked that if we’d started thinking about designing the hotel 10 years ago, knowing it would have its grand opening during COVID, we still wouldn’t have changed a thing design-wise. Basically, all the major moves work really well in a pandemic context. We have all exterior circulation which, for a boutique hotel, is kind of a paradigm shift. It was thoughtfully done and there’s a lot of depth to it. It’s styled like porches with seating areas, with great spaces to plunk down in a rocking chair overlooking the courtyard. There’s also a bridge connecting two of the buildings that’s really beautiful. It genuinely celebrates the wood. It also lets you circulate around those heritage trees that were saved.”

Razzaque happily reports that those trees were able to “survive and thrive” past construction. “I’m glad we could celebrate them,” she says. “Having a mature landscape creates so many opportunities to make the site feel like it’s been there for a long time.”

Operated by Austin’s acclaimed Bunkhouse Group, the Hotel Magdalena is the first mass timber boutique hotel in North America. It includes a ground floor restaurant, swimming pool, outdoor pool bar, and event space that all integrate into the central courtyard terraces. According to Razzaque, “the initial design thinking was to embrace the site and the landscape, and create an oasis in a more urban environment. Bringing in mass timber allowed that design intent to fold into the story of the project. That wood experience and that connection to nature and the landscape – you really feel it.”

With sustainability and green building at the forefront of design and new construction, Lake|Flato receives more and more requests to take on mass timber projects. As emerging mass timber design technologies come into their own, the firm will continue to find creative ways to push those innovations forward. “Bringing mass timber to more market sectors is definitely something we’ll pursue,” concludes Wascher. “It’s opened up so many new design possibilities, not just for office buildings and hotels, but for residential development as well.”

*Photos on this page by Casey Dunn

Where: Offices in San Antonio and Austin, Texas