A contractor of choice

Business View Magazine interviews representatives from CW & Sons Infrastructure, as part of our focus on the underground excavation and installation sector.

CW & Sons Infrastructure, Inc. is an underground utility company specializing in the installation and maintenance of conduit, manholes, and box tunnels for the public and private sectors. It was established in 2009 by Christopher Welch, who, at the time, was working as a superintendent for another utility contractor in the Washington, D.C. area. “We got our first contract in November of that year, working for Gaghan Mechanical at the DOJ (Department of Justice) building on Pennsylvania Avenue,” Welch recounts. “In the beginning of 2010, D.C. got back-to-back, one-foot snowstorms within a week of each other, and at that point, we were given a bunch of snow contracts. In mid-2010, with the money I had saved with all the snow work and the DOJ job, I left my employer and went to work for myself, full-time.”

“As of today, we’re at 105 employees,” says General Manager, Dusty Harbaugh. “Our main office is located in Washington, D.C, and we have small job site yards around the District – they come and go depending on contracts – and we also have a shop in Upper Marlboro, Maryland, as well. Ninety percent of our work is in D.C.; the other ten percent is in Maryland, and occasionally, we’ll go over into Virginia.”

Welch reports that a majority of the company’s contracts come from Pepco (Potomac Electric Power Company), a division of Exelon, the nation’s leading energy provider with approximately 10 million customers. “Our niche is underground transmission work for Pepco,” he explains. “We fell into that category by doing work for established Pepco contractors in 2011-12. I was working as a subcontractor, and in order to be able to bid directly to Pepco, you have to go through a step process. You first work as a subcontractor for other contractors who are CoCs (Contractors of Choice) for them, and then, once you get in front of them and they see your work ethic and your safety program, they ask you to bid as a CoC. And we were awarded that privilege in 2018.”

“That’s a big deal,” Harbaugh notes, “because when you talk about the competition, Pepco limits that to contractors that are on their list; you’ve only got three or four other folks that you’re bidding against for projects. It’s not like a public bid, where there are 47 people out there. So, they understand the value of the contractors that they’ve selected, who are doing the work right and safely. That makes our competition a lot less and we all know each other and get along. As a matter of fact, a lot of times, if one of us doesn’t get a job, we’ve got those other contractors of choice working for us as a sub, or we work for them as a sub.” 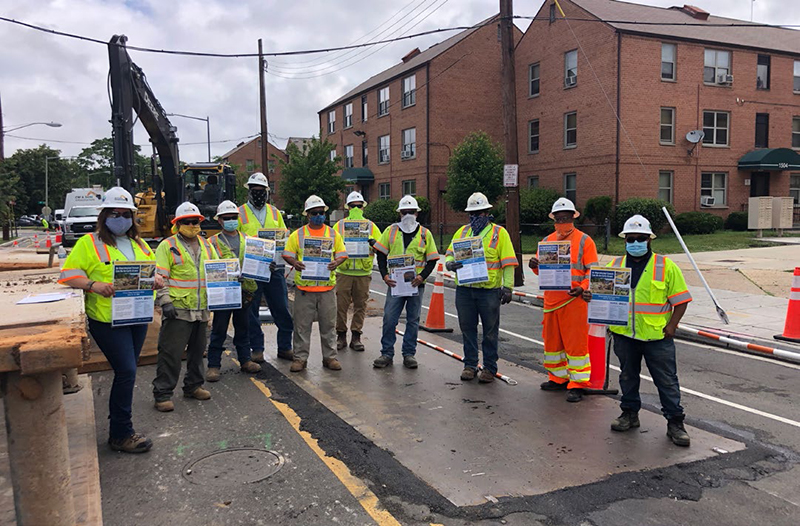 CW & Sons’ contracts from Pepco are substantial and should keep its workers busy for some time to come. “We recently were awarded a significant amount of work that we have to complete over the next three years or so,” says Harbaugh. “So, we’ve really boomed. The District of Columbia released a bunch of work in order to upgrade its power systems. With all the people coming into this area and the new construction going on above ground, all these people are going to need power and so they’re building in some redundancy in the metro area. The infrastructure in D.C. is pretty old; there’s a lot of stuff out there that was put in years and years ago. It’s still working, but if you keep putting load on it, it’s going to fail. And we were awarded a large portion of the contracts. So, we have a nice backlog for the foreseeable future.

Even so, Harbaugh adds, “all of our eggs aren’t totally in the Pepco basket. We also have many other contractors that we do utility work for as well as several emergency response contracts. Additionally, we perform stormwater and sewer work, as well, but the underground transmission work that we do for Pepco on the civil side, the manholes and pipe that we put in, is definitely our bread and butter, and we’re not looking to do anything new. We’re going to stick with what we’re good at.”

As a highly regarded member of NUCA (National Utility Contractors Association – Washington, DC Chapter) one of the things that CW & Sons is “good at,” is completing all of its contracts safely. “We take great pride in our Safety & Training Program,” Harbaugh maintains. “Our Safety Director, Jesus Cruz, and his Safety Superintendent, Xiomara Flores, are both OSHA Authorized Construction Trainers. And they are both bi-lingual. We have a significant number of our folks for whom English is their second language. So, in order to make sure they understand the safety and training messages, we provide all of our documentation, meetings, and face-to-face training in English and Spanish. It gives us an advantage to be able to train and teach important topics, in-house, such as Excavation Safety, Confined Space, First Aid/CPR, and OSHA 30 Hour Training. We also perform construction skills training in the field. We feel this sets us apart from others, as well.”

Today, many companies in the construction sector are challenged to find well-trained workers. CW & Sons has chosen to meet that challenge by hiring and training its own workers and then promoting them from within. “Every foreman that we have right now, except one, was brought in at a lower job – a laborer, or operator, or something like that,” Harbaugh claims. “They’ve all been promoted through the company to supervisory positions. Every crew Leader and all but one superintendent that we have here was brought in at something lesser and promoted up through the company. Our philosophy is feed the bottom. We get recommendations from our guys and we train them up through our programs here. You have a problem when you hire somebody else’s foreman. First of all, it’s a small construction market; we all know each other. So, if you hire somebody else’s foreman, not only are you taking away from them, you’re taking their problems, as well. So, we’d rather bring them up through our system. The right way, that we know how to do it, is how they’re going to do it. So, we take a lot of pride in promoting from within.”

Another recent challenge faced by the company, along with countless others, was during the early days of the COVID-19 pandemic. “Obviously, we’re not immune to COVID,” Welch admits. “We battled the same issues that a lot of other people have had. But we’ve had precautions in place; we have safety standards to where we quarantine people if we think they’ve been in contact with somebody. At one point, we actually had about a third of our employees quarantined, or off, because of it. So that really affected our productivity over the past six months or so, which of course, affected our bottom line. But we’ve bounced back now, and we are pretty much at full steam. We do constant reporting to Pepco and our other contractors that we work for. They want to know how many people that you have off and what safety programs and policies that we’ve put in place. So, we’re adapting and modifying and trying to do the best we can with this. Hopefully, we can keep up with it.” 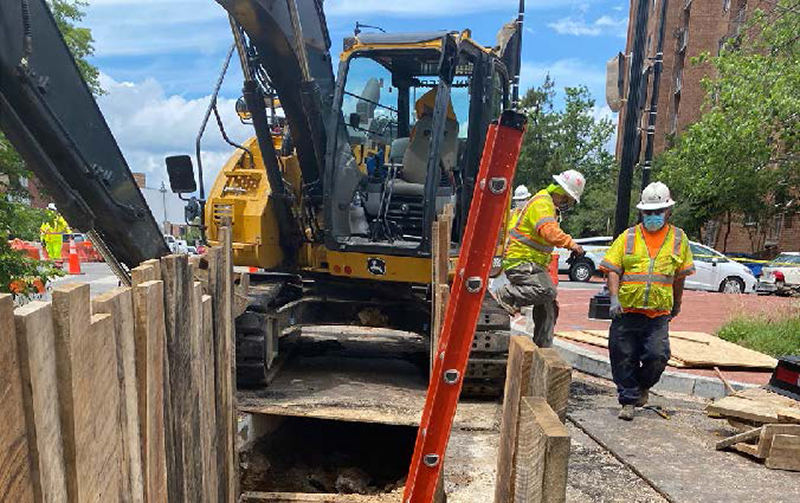 Harbaugh gives a great deal of credit for the company’s success to its management team. In addition to Welch and Harbaugh, CW & Sons relies heavily on the team (Nancy Hall – Controller, Jim Byrd – Director of Estimating and Logistics and Jacob Robertson – Principal Project Manager) and their various experiences and their ability to take the best of our shared ideas and implement them,” Harbaugh asserts. “The team communicates on a daily basis. This has been a bit more difficult during the pandemic, but we began having daily wrap up calls in late March, since we no longer are always in the office together. We also are proud of our Equipment and Truck Fleet. We have best-running and best-looking trucks and excavators in the D.C. Metro Area.”

“Chris has spared no expense in making sure our crews have what they need to get the job done safely and productively,” Harbaugh continues. “I worked for another contractor for over two decades that had subcontracted jobs to Chris previously, and I came to this company a few years ago because of the reputation he had as far as the type of work that he does – having a commitment to safety and how he takes care of his employees. He’s loyal to his guys and they’re loyal to him.”

Regarding CW & Sons’ commitment to its customers, Harbaugh sums it up thusly: “When we put a price on something, you’re going to get that full product. That’s why people come to us and want us to work with them on their projects. The clients we work for know they’re going to get a project that’s completed safely, on time, on budget, and according to plans and specs.

WHAT: An underground installation and maintenance company