A family legacy of hard work

Linaweaver Construction, Inc. specializes in civil infrastructure projects that run the full gamut from mass excavation to site grading, water installation, sanitary sewer, storm sewer, box culverts, new roadways, street rehabilitation, and subdivision and building infrastructure. Well known and regarded in the region, the family-owned firm’s list of clients includes almost every municipality in the greater Kansas City metropolitan area. The company has evolved from humble beginnings – a product of hard work and determination and those tenets continue to this day.

It all began with Glen Linaweaver Sr, who started his career digging basements without the help of tractors or motorized equipment. He used mules and the muscles of hired help to dig out the corners.

His son, Jerry Linaweaver Sr., took over in the early 1970s. Current President Mark Linaweaver worked part-time for the family business growing up, but took a more active role after graduating from high school in 1984. There were struggles, but perseverance won out over the next few decades, as Mark learned how to smooth out every bump on the road to becoming a successful contractor. 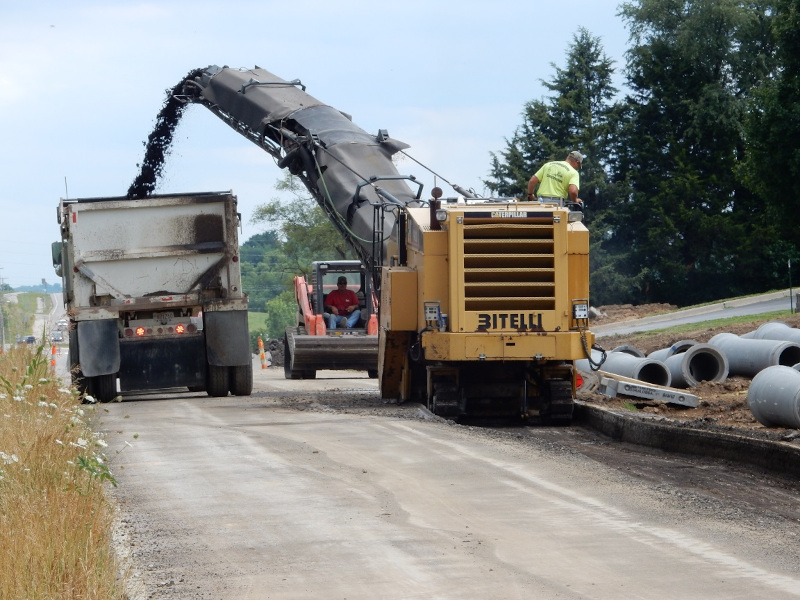 In the mid-1980s, Jerry Linaweaver Sr. decided to move into commercial construction, and unfortunately was locked into a loan with some unfavorable terms. The company took a large financial hit and the family had to sell their horses to make payroll. Eventually, the family farm was refinanced to pay off the loan. The business nearly went under again near the end of the decade. Mark Linaweaver, recalls, “A job went south and ended up costing Linaweaver Construction about $300,000. I was in my early 20s at the time and Dad just said, ‘We’re probably going to go broke, just tell me where to go, I don’t want to do more paperwork, I want no office, I’ll go run equipment out in the field.’ So, I took over operations and started working 15 hour days for close to 10 years just to get even. By doing that, I learned a whole lot, so I feel like I can get us through about any kind of problems now.”

Today, Linaweaver Construction works on multi-million dollar projects. In fact, the company is about to close the books on a year of exceptional productivity, including a 198-acre plot project in Lansing, Kansas. And a $5.3 million road project in the Kansas City suburb of Gladstone, Missouri, where about 120,000 cubic yards of dirt was excavated to reroute Pleasant Valley Road. Nearly 3,000 feet of new road was built, while one mile of existing road was rehabilitated. A new storm sewer, two large block retaining walls, street lighting, a roundabout, a bike lane, and sidewalk were also installed.

In spite of the challenges of COVID-19, there was a silver lining for Linaweaver Construction this year thanks to an unusual shift in the weather. While a substantial amount of their work usually stems from the aftermath of heavy rains that overwhelm aging sewer systems, it was actually a lack of precipitation that accelerated project completions in 2020. Mark explains, “The weather’s been so dry. We generally allow, say in a six-month period from May to November, that probably a month and a half to two months of that is going to be rain or bad weather. And we didn’t have that this year. So, much more work was accomplished.” 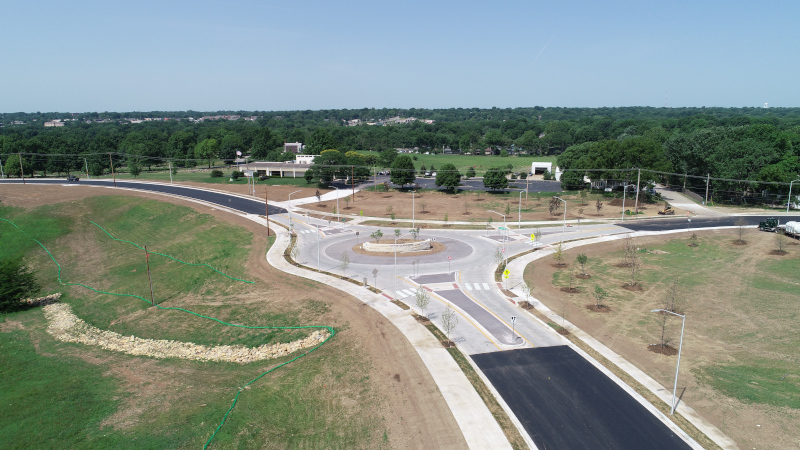 Linaweaver Construction counts both Kansas City, Missouri, and Kansas City, Kansas, among its clients. Nearly 50 other municipalities, as well as the Kansas Department of Transportation and Missouri Department of Transportation are also on that list. “We work about 75 percent with cities across the metro area,” says Mark. “All the cities within a 50-mile radius know us pretty well. And we do probably 25 percent of private subdivisions or commercial buildings.”

The company completed 60 projects last year – doing that volume of work requires trusted relationships with a number of other companies. McAnany Construction, Little Joe’s Asphalt, Freeman Concrete, Phoenix Concrete, and Realm Construction have all partnered with Linaweaver Construction on successful projects. Mark also gives a supplier shout-out to Kansas City Winwater: “Tim Evans, our sales rep. with Winwater, has been great to work with through the years. His estimates and proposals to us are always right on and put together the way they should be. They’re very clear. He gives us good pricing every time; it’s just a great company. We also work with PRETECH Corporation for precast concrete structures. Kelly Poretta is our saleswoman for PRETECH; she works hard and is very efficient. We have a really good relationship  with them.”

Over the last decade, Linaweaver Construction has spent about $1 million annually on equipment. Of course, some of that expense is offset by liquidation of older equipment. The company also saves money by purchasing new machinery at auction. The equipment Linaweaver Construction uses now is a far cry from what Glen Linaweaver Sr. used when he was starting out. Of note, global positioning systems can be used to ensure precision. “So, then all we’ve got to do is plug it in our dozer and we’ve basically got plans right there on hand,” says Mark. “When you get the grade within six inches, you hit a button on your machine and it cuts the grade within a quarter to a half inch. You only have to be smart enough to use a computer, which most people are nowadays.”

Equipment is stored on a site of nearly 200 acres in Lansing, Kansas, where the Linaweaver Construction offices and machine shop is located. A sister company, Mark Linaweaver Hauling LLC, was established in 1994 when Mark found that he needed more trucks and equipment to be able to keep up with construction projects. That entity currently includes nine trucks used primarily to haul materials to and from construction sites. Through the years, Mark worked alongside his wife Lisa to help manage both the construction and hauling company. Lisa was able to take over the hauling company and keep up with her family life and raise their three children.

Now that the kids are grown the whole family works together to keep Linaweaver Construction, Inc and Mark Linaweaver Hauling, LLC running. Lisa oversees the books. Their son, Marcus, is Vice President of Linaweaver Construction. Daughter Ashley is safety project manager, while Hayley, the youngest of the three siblings, is learning how to keep track of company finances. Mark’s goal over the next few years is to keep things rolling smoothly as he transitions ownership to his children. It would be a fitting shift for a business that can be traced back four generations. Mark shares, “If I had my dream, we’ll probably stay the same size for five years, let all the kids get comfortable, and then Linaweaver Construction would be theirs. And it will depend on what they want to do. But the biggest thing is keeping it together right now at this size.”

Part of the strategy to maintain consistency in the business concerns Linaweaver Construction’s excellent employees – usually they number between 50 and 60. When a senior employee leaves, it opens a spot for someone else to move up. Mark relates, “A lot of our people come in as laborers that don’t know that much and first we teach them how to lay pipe. Then after a year or two they get working with the equipment and start moving up a little bit in the company. Because it takes at least 10 years to create a good superintendent. But if you’ve got a good superintendent, then all the others fall into place.”

So far, the pandemic hasn’t had a significant effect on the company, but Mark wonders if it will. He surmises that demand for large, commercial developments may slow as more businesses allow employees to work from home, possibly even after the pandemic. But Linaweaver Construction will find a way to navigate whatever challenges the future brings. Mark Linaweaver has spent his career riding the highs and lows of the construction business, and he’s learned that no matter how advanced the equipment gets, there are other more valuable assets. In order to continue to provide the best quality that customers have come to rely on, Mark says, “It all comes down to great employees.”

What: Specialist contractors for civil infrastructure

Where: Based in Lansing, Kansas