Business View Magazine interviews representatives from Junction City, Kansas, as part of our focus on best business practices of American towns and cities.

Nobody likes to be in debt, but in the real world, almost everybody is. Individuals, businesses, and even governments borrow money for many reasons with the intent that the borrowed funds will be paid back, with interest, sometime in the future. Meanwhile, having ready cash, or credit, on hand makes it possible to achieve outcomes that would be a lot less feasible without immediate access to a ready supply of legal tender. If things work out well, either for the individual, the business, or the government, the worth of the borrowing becomes apparent over time, revealing itself in enhanced personal wealth, success in business, or a thriving community. But sometimes, things go awry, and the future expectations, on which amassing the debt were originally predicated, do not pan out. Then, the only outcome is an overdue bill.

Junction City is a city in, and the county seat of, Geary County, Kansas, so named for its position at the confluence of the Smoky Hill and Republican Rivers, which, together, form the Kansas River. Formally incorporated in 1859, Junction City lies 65 miles west of the State Capitol in Topeka, and another 65 miles west of Kansas City, Missouri. Since the late 1800s, the City has been closely aligned with nearby Fort Riley, a major U.S. Army Post, and once the longtime home of the U.S. Army’s 1st Infantry Division, also known as the “Big Red One.” 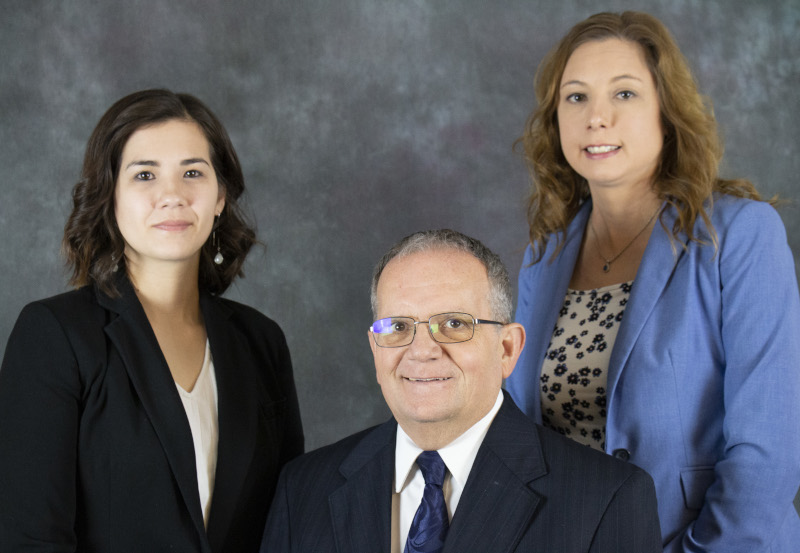 For the last several years, Junction City and its population of 23,000 have struggled with what many communities of its size would rightly consider a burdensome, if not an insurmountable quantity of public debt. Yet, the story of what this city’s leaders have been doing, and what they continue to do, to pay down what the city owes, while still addressing the needs of its citizenry, is a testament to grit, determination, and prudent leadership.

“When we talk about Junction City,” says City Manager, Allen Dinkel,” I think we have to look back about 16 years, because what we’re doing now is predicated on what happened in 2004, up till now.” According to Dinkel, at that time, the City was planning for a large amount of growth. It was informed by the U.S. government that the Big Red One would be returning to Fort Riley in order to reformulate its headquarters on familiar ground, after a year’s stationing in Germany. “The community was told, ‘You’ve got to build housing, because this town will grow from 18,000 to probably 40-50,000,’” Dinkel recounts. “So, the City brought in a lot of developers to try and develop the area.”

Preparing for the good times ahead, a lot of borrowing, speculation, and planning took place. It was estimated that $600 million in new construction was imminent, with thousands of single and multifamily housing ready to be built to support the return of 4,500 soldiers and their families. The City had created special benefit financing districts and borrowed heavily to finance the necessary infrastructure improvements to support the expected growth. It meant to get repaid for those expenses, over time, from the special assessments it would levy on the property owners, i.e. the developers, who would then pass some of those costs onto their new tenants. If all things worked out, the City would be able to repay its loans expeditiously. But things went awry. The Great Recession of 2008 struck, with a particular deadly blow to the housing sector, and the Army changed its plans for Fort Riley.

“All the developers, basically, defaulted,” Dinkel continues. “And the City didn’t have any financial insurance against them and went into debt to about $125 million, which, for a city this size, is about five or six times more than it should be. The population didn’t happen; the growth didn’t happen. But the debt stayed there.”

Since that time, the City has had to focus on how to pay that debt off. But while doing so, it doesn’t seek to cast blame on the past. “Probably everybody made mistakes,” Dinkel admits, “from the military to the government, to the City. It’s easy to look back at the city management then and ask what could they have done differently. Everybody was anticipating making lots of money and growing the community. They saw it as their shot to get to 50,000. It didn’t happen. But it really didn’t take long for the people to try and get themselves out of it. As my daughter says, ‘You can cry me a river, or you can build a bridge and get over it.’ And that’s what this community has done. They sucked it up and just moved forward. It’s paying off now. We still have that debt out there, but we’re paying if off every year.”

In 2009, the citizens passed a one-penny sales tax (just renewed through 2030), which helped, and helps, to pay down the debt. It also put any new infrastructure projects on hold and didn’t spend on items whose maintenance could be deferred. “The City has gone through a period of years where infrastructure – water, wastewater lines, streets – had been left alone,” says Dinkel. “In trying to be conservative, they hadn’t been touched at all – all to get the debt down. And instead of $125 million, by the end of this year, the general obligation debt will be down to about $69 million. It’s still way too high, but it’s a major progression from where we were.”

Now, according to Dinkel, while continuing to focus on paying its creditors, the City is also looking to grow – perhaps not as quickly as it had once hoped to, but in a measured and sustainable fashion. It also began addressing the needs of its long-neglected infrastructure. “In 2013-14, the city did a three-phase approach in regards to water and wastewater,” Dinkel reports. “Phase One was ‘gotta have;’ Phase Two was ‘need to have;’ Phase Three was ‘wanna have.’ We’re about done with Phase One, now, in upgrading our water plant and two wastewater plants. Now, we’re getting ready to start Phases Two and Three. The wastewater side will be a $30 million expenditure; on the water side – about $12 million, which will get the plants in great shape, other than routine maintenance, probably, for the next 25-30 years. We’ve also addressed a lot of our water distribution issues in the ground. We’re working on our sewers, as well.” 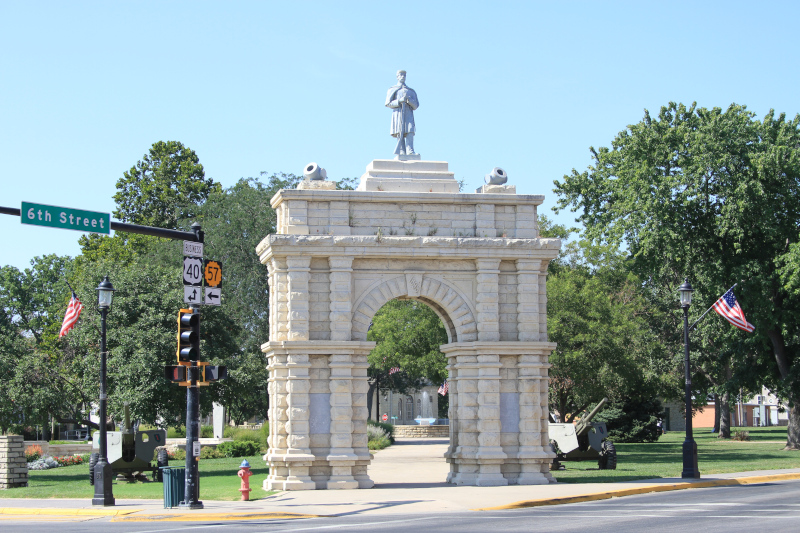 “On the street side, we do have significant portions of streets under construction,” he adds. “Plus, we’ve also been able to gain a lot of grant funds from the Kansas Department of Transportation and did a lot of projects with shared money. We’re trying to keep that balance of not raising taxes too much but keeping good services. As a whole, I think we’ve done a good job of getting that balance.”

Meanwhile Junction City is reaching out to businesses, touting its many advantages to potential newcomers, not the least of which is its skilled, educated, and diverse workforce, many of whom are newly retired military who, after ending their service at Fort Riley, still want to remain in the community. “We’re a unique town,” Dinkel explains. “Forty-five percent of the people are fourth generation or more Junction Cityites. Thirty percent, or so, of our population is rotating military – they’ll be here for one to four years. Then, you have about 20-25 percent that are retired military. This community welcomes the army and they like living here. So, we have a ready and willing workforce with a good work ethic. Maybe we can’t offer dollars that some people can as an incentive; the City has so much debt, I don’t have available funds. What we can offer is employees.”

Other advantages include Junction City’s location, in the middle of the United States, with easy access to air, rail, and road transportation options.  And, there is land and available properties in Geary County, especially for: manufacturing, transportation/warehousing/distribution, robotics/automation, ag & bio-based products, unmanned aviation systems, and defense-based businesses. Residents benefit from proximity to Kansas City and its cultural amenities, while enjoying a reasonable cost of living and small town atmosphere. With 35 public parks and fields and an excellent school system, Junction City is also a great place for families.

Current major employers include Smithfield, which employs about 400 locals at its Junction City processing plant, and Footlocker, whose distribution center employs 340. “Another one we recently added is a company called Camso,” says Finance Director, Lindsay Miller. “They make rubberized tracks for agricultural purposes. Over 50 percent of their workforce is retired military – that’s been a great retention tool for us.”

City Clerk, Tammy Melton, adds that Junction City’s historic downtown is looking forward to revitalization under the purview of its private business owners. “They’re trying to come up with a plan where you can have a place to eat, sleep, and work in that area with living quarters and apartments for people,” she notes. “They also want the downtown to have grocery shopping so people don’t have to drive. They want an arts district to entice people to come there and so the younger generation would want to be there. We already have the Opera House, downtown, and they’re bringing in lots of events and attracting people from outside the area.”

The C.I. Hoover Opera House has been a vibrant and productive cultural landmark in Junction City since 1880. While for most of the last two decades it has been down on its luck, over the past few years, local arts patrons have raised money, leveraged grants, and borrowed to put it back on its feet as an important community asset. Today, it is home to all of Junction City and Geary County’s arts agencies: The Junction City Little Theater, The Junction city Arts Council, and The Junction City Community Band. It also holds memberships with the Kansas Historic Theater Association and the League of Historic American Theaters. “It’s a neat little theater that’s used a lot,” says Dinkel. “It’s a focal point, where development can spring out from.”

In conclusion, all three city employees stress that the best reason to live and work in Junction City is its people. “People are very welcoming here and that’s probably because of the military,” says Dinkel. “New people are always coming here all the time with the military. And when they get here, they just can’t believe how they’re received. You’re important here the minute you show up.” “We want everybody to be happy to be here, and utilize what we have,” says Melton.” Miller agrees. “Quality of life is an important focus for our community,” she says.

Nobody likes to be in debt, but in Junction City, Kansas, it’s just another bridge to get over.

WHERE: Geary County, Kansas, at the confluence of the Smoky Hill and Republican Rivers