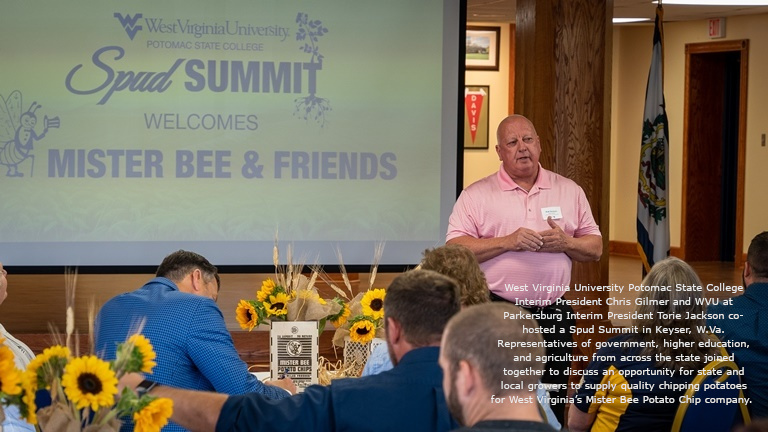 West Virginia University Potomac State College Interim President Chris Gilmer is set to finish what he started when he was at the helm of West Virginia University at Parkersburg. He forged a relationship with WVUP Alumna Mary Anne Ketelsen, president of Mister Bee Potato Chips, a woman-owned business and a West Virginia institution. Gilmer set out to prove that chip potatoes could be grown in the state which was successfully proven on WVU Parkersburg’s 20-acre Riverhawk Farm.

Gilmer started his new position with Potomac State College on July 1, 2022 and admits one of the reasons this opportunity excited him most was the 800 acres of working farms and the strong academic programs in sustainable agriculture that the Keyser campus offers.

In keeping with his goal, Gilmer co-hosted a statewide Spud Summit on September 15 on the Potomac State College campus along with Dr. Torie Jackson, WVU at Parkersburg’s interim president. They brought together senior leaders from Mister Bee Potato Chips as well as representatives of U.S. Senators Joe Manchin and Shelley Moore Capito, and Congressman Alex Mooney.

Also joining were Gary Howell, the speaker pro tempore of the West Virginia House of Delegates; the WVU Extension Service, led by Dean Jorge Atiles; West Virginia’s Deputy Commissioner of Agriculture; representatives of the U.S. Department of Agriculture; several institutions of higher learning; local economic development and extension leaders from West Virginia and Maryland; farmers; leaders of veteran-serving groups; and others. The group conducted an open conversation about what it would look like to build a statewide farm collaborative, which would guarantee locally grown potatoes for Mister Bee and guarantee consistent income for the state’s farmers.

Ketelsen’s entrepreneurial and visionary leadership is rapidly expanding the company into a national powerhouse. Ketelsen said Mister Bee currently purchases approximately nine million pounds of potatoes each year from out-of-state providers. “Buying, shipping and processing potatoes from long distances is expensive and inconsistent,” she said. “Pennies matter to a small business such as Mister Bee and we can create more jobs in West Virginia and cut costs by purchasing from our neighbors instead of strangers,” Ketelsen said.

Gilmer said the summit “exceeded all expectations from the broad attendance of key stakeholders and the substantive ideas for collaboration.” He said WVU PSC and WVUP will serve as a hub for the scientific research and coordination of the overall project and the formation and administration of a statewide farmer’s collaborative. “We plan to include Veterans who are farmers in our strategic plan and also hope to include farmers in neighboring areas of Pennsylvania, Maryland, and Ohio,” added Gilmer.

WVUP Interim President Jackson said she shares Gilmer’s commitment and was impressed by the “diverse ideas for partnerships, funding, workforce development, and use of the state’s farmland to significantly increase potato production.”

“We developed a long list of questions during the Spud Summit for which we now must find answers to determine the feasibility of moving forward, but we also began to identify partners and possible funding sources to move this venture forward,” Gilmer concluded.

For individuals or agencies interested in getting involved and participating in this initiative, please contact President Gilmer, at chris.gilmer@mail.wvu.edu