From humble beginnings to an aviation hub

If you are flying into Fargo, North Dakota – then you are flying to Hector International Airport. Taking its name from the original landowner almost a hundred years ago. On September 9, 1927, Martin Hector leased a quarter-section of land at the northwest corner of Fargo to the city for five years at $1 per year. Four years later he gave that land to the city and after that Hector and his daughter-in-law, Mrs. Fred M. (Margaret) Hector, donated several additional parcels totaling nearly 50 acres that were incorporated into the present airport property, along with acreage purchased from several adjacent landowners.

The year after the airport opened, Northwest Airlines itself, only a year old as a company, began scheduled weekly flights into Fargo – they stopped for a year or two, then in 1931 regular commercial service resumed and has remained, with the airlines coming and going, to this day.

“When Northwest started service Fargo was the second city that they had served,” explains Shawn Dobberstein, Executive Director of the Hector International Airport. 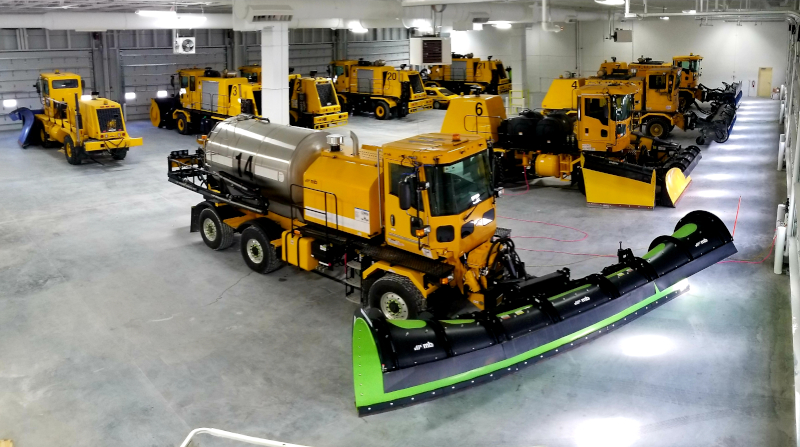 “Before that, they were flying in the mail here. We have a very long history of commercial passenger aviation here in the community, and of course, general aviation prior to that. That is where we started, in the early teens at a different location and then there was leisure-type aircraft activity taking place at the airport here in Fargo many years before Northwest.

“In the 1980s Customs started service here and we became an International Airport. The North Dakota Air National Guard started operations here with the 119th fighter wing in January of 1947, so the military has also been a part of our history for a long time. And we just continue to grow, with fixed-wing aircraft as well as helicopters, with individuals who have private leased hangars and corporations who fly from here for their operations. From just 160 acres of land back at the beginning, the airport has grown to be well over 3200 acres now.”

Dobberstein emphasizes that the airport works with these entities to collaboratively promote Fargo. The airport is the face of the town and airport improvements have a positive economic impact on the city and the surrounding community.

“We are constantly doing infrastructure improvements, and right now we are building a new exit plaza for our paid parking lot. It should open in early 2023. We also did some surface parking expansion to our paid parking lot by opening an economy lot that will hopefully be available to the public here within the next 30 to 60 days. We are upgrading the security system around the airport. We are in the process of signing a contract with an architectural-engineering firm to start the design of a major terminal expansion and modification project for which we hope to break ground in 2024. This will be adding space to the terminal building to put an additional four gates in place adding to the five we currently have.”

“With the help of Homeland Security and the Transportation Security Administration,” he continues, “we have also expanded our security checkpoints in the last few months. We now have a third lane, with standardized X-ray and screening equipment, and this has increased traffic flow – the third lane is a TSA precheck lane for those that go through that procedure, expediting the processing of passengers and minimizing wait times.”

As with all airports, funding is always an issue. All the non-terminal type projects, runways, aprons, and the like qualify for 90% federal funding from the FAA Funds are also available from the North Dakota Aeronautics Commission. We also have access to occasional special funding such as the bipartisan infrastructure legislation. There will also be some smaller projects that are ongoing – the airport will be replacing aging concrete, and adding new concrete for our FBO, Fargo Jet Center who is expanding both corporate and general aviation hangar space. Terminals however are a different story.

“We are looking at about a $123 million project right now,” Explains Dobberstein, “on the terminal side of it roughly 70 or 75% of that might be eligible for federal funds – but I don’t believe the federal government will have all of the funds available to meet their eligible share so we’ll be going out and borrowing funds, we will be tapping the state of North Dakota not only for the usual funding, but we are also applying for the Prairie Dog Fund to help offset the cost of these infrastructure projects.”

Growth in a community depends on many factors – but at the heart of everything might be the question, how easy is it to get around? And in Fargo, it is a very positive answer. This holds for the airport as well – doubling the number of commercial gates necessary in just a few years while at the same time expanding in every way. Not least of which includes their cargo operations. FedEx has an operation in Fargo supported by their hub in Memphis, while UPS is based, and opened a brand-new facility in Fargo supporting their Hub in Louisville. This accounted for more than 210 tons of cargo aircraft – making them one of the top 60 cargo airports in the country, when ten years ago they were a blip on the radar.

When asked what the future looks like for the airport, Dobberstein doesn’t hesitate to answer that continued focus on infrastructure will be his top priority.
“Completing this terminal expansion is very important to us to better serve the traveling public as well as the general, corporate, and military traffic. We have seen significant growth in the number of hangars that are being built here at the airport to support all of these aspects of aviation. We also hope to expand one of our runways, 9/27, to have a longer crosswinds runway.”

“We cannot currently accommodate the larger aircraft with just 6300 feet. So, one of our biggest priorities in the next few years is to expand that length to 7100 to 7400 feet to accommodate larger commercial traffic. We continue to be a 24-hour operation, our control tower is 24/7, and we have 24/7 US Customs and a level one trauma center in our community. Because of this, we continue to be a primary alternate for both domestic and international carriers that overfly our skies as they transverse the country. “

In other words, he concludes, “This is the airport that is here for everyone.”

WHAT: A commercial, corporate,general aviation and military airport

TL Stroh is a full-service Architectural and Interior Design firm built around a commitment of satisfying clients’ needs while developing efficient and innovative design solutions. Located in Fargo, North Dakota TL Stroh offers everything from planning and site analysis to design development and construction documents and onsite representation.