Rennu Dhillon, President and Founder of Genius Kids, believes that everyone is born a genius and that it is the responsibility of educators and parents to awaken the inner genius in their children. She also believes that one is “Never 2 Little 2 Learn.”

Born in Mombasa, Kenya, the daughter of a well-known physician and politician, Dhillon’s own early education included good doses of rigid study and the pressure to compete. The parts she did like most were drama, theatre, and public speaking, things she was introduced to when she was just three years old.  So, before she had even decided to become an educator, herself, after previous careers that included modeling and pharmacy (she earned a degree from the University of Aston in Birmingham, UK), she was determined that if she ever had children of her own, they would be taught in a way that was motivating and challenging but free from anxiety or pressure.

Newly married, Dhillon moved to the U.S. 30 years ago expecting to continue her career as a practicing pharmacist, but soon abandoned the plan. “When I came here and found out that I had to go back to school to re-do my whole pharmacy degree, again, it just didn’t seem appealing,” she says. Instead, over the next few years, she worked with her first husband in a thriving restaurant franchise operation in the San Francisco Bay area. “It was a very successful venture, so I realized that franchising was a great concept and that maybe one day, I’ll do my own thing,” she relates.

Whatever that “thing” might have been, it had to be put on hold after a divorce left her a single mom with a three-year old and a one-year old to take care of. When she went looking for daycare programs for her kids, she struggled to find the right fit. “I would either find programs that were only playschools, where they were not really teaching anything, or I’d find schools that were too academic with too much pressure on the kids, and I really wanted a good balance,” she says. “I didn’t find anything and I ended up raising my kids and staying home.” During her time as a single stay-home mom, she also completed her Doctorate in Science & Naturopathy, and started learning more about the left and right brain theories.

Dhillon discovered that she was actually pretty good at tutoring her own children, as well as the children of some friends. “I never thought about being a teacher, but maybe I could start thinking about a curriculum,” she recounts. “One of the things I hit on was I taught both my kids to read by the age of two. I thought, ‘I may have something, here.’”

Once again, that “something” had to wait as Dhillon, in order to pay the bills, became a corporate recruiter at a company that placed accountants and CFOs. “I would get these amazing résumés and when I would call them in for an interview, they were nothing like what the résumés reflected,” she remembers. “I noticed that a lot of people lacked confidence, the ability to interview or communicate. I thought, ‘Maybe if we had all taken public speaking classes when we were little, it would have been helpful.’”

Now remarried and more financially secure, Dhillon says that one day she simply decided that she couldn’t remain in the corporate world any longer and was finally ready to launch her own business. “So we sat down at the dining room table with our kids and came up with this idea named ‘Genius Kids,’” she says. “The idea of daycare was not even in my head; I actually wanted to teach science and public speaking and how to give presentations, because science is taught too much later on in the schools here, compared to England, and public speaking is not taught in schools, at all. We started with a summer camp with two kids, just to incorporate science and critical thinking, and public speaking.

Within a few months, Dhillon had launched her first preschool, in Fremont, California, and began developing her own learning programs, incorporating speech and public speaking into every aspect of learning.  The goal was to develop a child who is well-balanced in all facets: academics, social, motor and emotional skills, personality, communication, logic, and confidence. At Genius Kids, the emphasis is on active learning and teaching children to put knowledge to use in independent and creative ways.

Word spread quickly as Genius Kids children began reading before age three, and confidently winning local and national public speaking competitions. Dhillon’s inventive curriculum proved to be lightning in a bottle, and the company expanded rapidly. Today, the original center, first opened in 2001, has grown to a total of six corporately-owned Genius Kids Centers and 26 franchise units in the Bay Area. “My first two franchises were parents to kids I taught at the school,” says Dhillon. “From there, it’s just been word-of-mouth; families that heard about us; relatives of relatives; cousins of cousins of cousins.”

While there are many other childcare options available, Dhillon believes that what makes Genius Kids special is that is has its own curriculum, written in-house, by Dhillon, herself, and is unique to her experience as a scientist and trained public speaker. “I have created lessons that teach public speaking all day long,” she states. “Even your infant or toddler will have a microphone in hand. Everything we do – it doesn’t matter whether we’re teaching math or science or reading or art – everything goes back to building confidence and public speaking – etiquette, protocol, how to stand – these are things we incorporate every day. I think that’s very unique to us. We have two-and-a-half-year-olds who give wonderful speeches on stage because they do public speaking all day long.” The Genius Kids franchise has three brands: The Lil’ Genius Kid that caters to day care ages 0-6; the Genius Kids Club that caters to after school enrichment; and Genius Kids that does both.

Dhillon has also created her own doppelganger – a cartoon character named Miss Rennu – who appears in all of the centers’ teaching videos. “The reason I did that was because when we were running our own centers, everybody was coming back and saying, ‘I want you to teach my child; it has to be you, Miss Rennu!’ I thought to myself, ‘How am I ever going to multiply myself in five classrooms? There has to be a way in which Miss Rennu can be in all these classrooms teaching, and yet, not physically be there.’ So, now, I’m in every classroom; it’s my voice that teaches. I am there, teaching. Also, in this way, the curriculum is consistent. We’re not relying on the teacher in the classroom.  At Genius Kids, we’re relying on the curriculum.”

Another pioneering, educational initiative that Dhillon introduced was the use of smart boards as a learning tool. “I know a lot of people are using smart boards, now, but when we started preschool, 16 years ago, I don’t believe anybody was using smart boards at that time,” she says. “They’re very interactive and the kids are always engaged. Kids are doing it now with IPads and smart boards in public school, but we introduced that technology 16 years ago in preschool. So, now when our students go to school, they’re already familiar with computers and smart boards because they’ve been doing it since the age of two.”

Dhillon says now that her curriculum is proven and consistent, she would like to expand her franchise territory. “We started in the Bay Area and now I’m getting a lot of a lot of interest from New York, New Jersey, Texas, Florida, and also international,” she reveals. “I was waiting; I wanted to make sure I had everything in place; I wanted my curriculum to be intact and it’s easier when you’re close to your franchisees so you can supply them with support. I wanted to get that in place before I extended myself. Quality is very important, so I wanted to grow slowly and steadily.”

Quality is equally important when it comes to awarding Genius Kids franchises. “One of the very important things we learn in this business is choosing the right person to come into it,” Dhillon says. “I don’t look for investors. There are a lot of people out there who have a lot of money who come in and say, ‘Here’s the check and I want to open five,’ and I’m not interested. Because I think when you’re dealing with childcare everything you do has an impact for the rest of their lives. So I put them through a rigid interview process and probably turn away more people than I accept. I want the owners to be involved in their business; I think that’s very important. I want that quality care. I want the same passion that I have, so I look for passion and integrity.”

Dhillon plans to open four or five new franchise locations a year. “I would love to expand all over the U.S. and I had a lot of interest in going overseas. I don’t have to go out looking for franchisees – they find me. But I’m treading the waters carefully,” she explains, “because I want to make sure that my product is not diluted.  For me, it’s all about quality, not quantity. I want my franchise to be known for quality care. It’s not about having a hundred franchises in five years; it’s about having every single franchise being successful and profitable. And the parents should be loving it.”

It may have taken Rennu Dhillon many years before she was finally able to pull together all the pieces – her love of theater and public speaking as a little girl; her role as a partner in an early franchise business; her time as a young mother who wanted to teach and motivate her own children; her years as a corporate head hunter who perceived a communication and confidence deficit in the job applicants she interviewed – that have helped make Genius Kids what it has become today: a living embodiment of her own genius and her own life’s experiences.

Today, Genius Kids is a family affair. Husband Baldish Gill is the company’s Director of Finance; daughter Shana Nijjar is a Vice President, managing all the corporate centers; and daughter Sheena Dhillon is the Director of Curriculum Development.

And so, for anyone who wishes to follow in Rennu Dhillon’s footsteps, she offers the following advice: “Be your own original masterpiece,” she says. “Create your own thing and believe in it.” She certainly has.

Check out this handpicked feature on Pump it Up (Fun Brands). 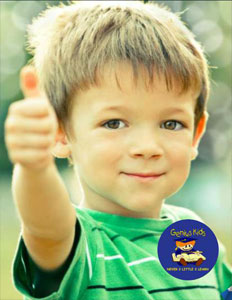