Business View Magazine interviews Clay Finken, Director of Erie-Ottawa International Airport, for our focus on Regional Airports in the U.S.

Welcome to Vacationland! That is how Port Clinton and the surrounding attractions in Ottawa County and Erie County, Ohio are collectively known to visitors. Tourism is anchored by the Cedar Point Amusement Park, Put-in-Bay, and Kelleys Island. In terms of air service, this popular region is served by the Erie-Ottawa International Airport (EOIA), which itself has become a destination, as home to the nostalgic Liberty Aviation Museum and Tin Goose Diner.

“We are located on the south shore of Lake Erie in Northwest Ohio,” explains Airport Director Clay Finken, “and it is a truly beautiful area, especially in the summertime. We’ve got miles and miles of shoreline with all sorts of activities to do with the water. There are also wineries here that grow different varieties of grapes. The region boasts a rich history of winemaking, both on the mainland and on the Lake Erie islands. We also have breweries of all sorts, tons of speciality dining in the area, and of course, Cedar Point – the flagship park of the Cedar Fair Entertainment Company. There is also a great diversity of wildlife. We are home to some of the largest wetlands preserves in the country; we have quite a reputation in the birding world, people come from all over to watch the migration of birds from South America to Canada each spring and to take part in “The Biggest Week in American Birding.”

Erie-Ottawa International Airport is owned by the Erie-Ottawa Airport Authority and operates as its own Fixed Base Operator (FBO). Flights are about 60% tourist-based and 40% business travel. The general aviation facility has two runways: 18/36 runs north-south and is 4001 by 75 feet. Runway 9/27 is the east-west approach and comes in at 5646 feet long by 100 feet wide, it has grooved pavement with a precision GPS approach and LED lighting, including PAPIs and REILs. The airport accommodates traffic up to the Bombardier Global 6000.

Jess Howard Electric Company has done most of the recent lighting work at the airport. Finken notes, “We have done several projects with them over the years. They are professional and very responsive to our questions and concerns, which makes them a wonderful company to work with.” Among the key aviation-related businesses on the field, Griffing Flying Service, offers a Part 135 charter service, a maintenance facility, and has a flight school. Their fleet consists of a large variety of aircraft from a Piper Archer to a Hawker 800.

One of the more colorful bits of history celebrated at EOIA is that it was once home to the “World’s Shortest Airline.” In 1936, one of the early barnstormers, Milton Hersberger, purchased the first Ford Tri-Motor and began an air service to the nearby Lake Erie Islands. Affectionately known as the “Tin Goose”, the legendary all-metal aircraft, which pushed speeds of 85 miles an hour, took about 10 minutes to fly to each of 12 landing strips – averaging less than 45 minutes round trip. 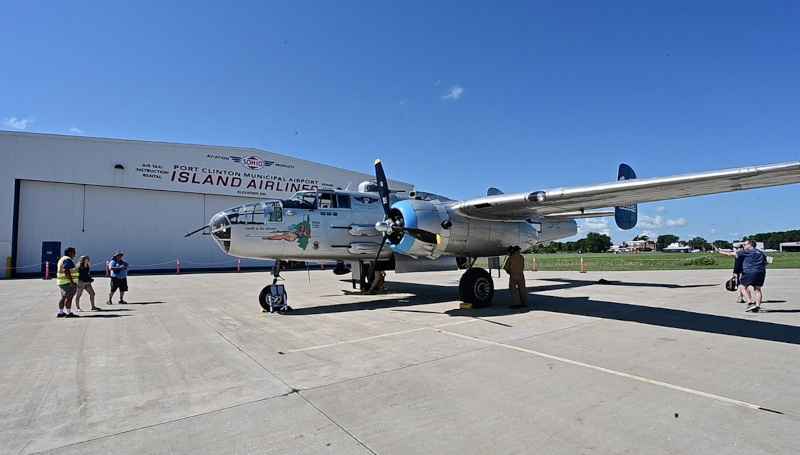 In a nod to this fascinating legacy, the Tin Goose Diner is a popular complement to the on-airport Liberty Aviation Museum. The eatery is located in an iconic old-fashioned metal dining car. It was originally built in New Jersey in 1949, then moved to Pennsylvania where it became Steve’s Diner. The Liberty Aviation Museum was established on December 7th, 1991 with a handful of dedicated volunteers to showcase WW2 aircraft. One of the early acquisitions was a flyable Ford Tri-motor, and this continues to be a big part of the museum, which led to the establishment of the Tri-motor Heritage Foundation. They also have a B-25 bomber, as well as other vintage planes. “The museum is a real gem of the region,” says Finken. “They pride themselves on their preservation efforts and fly-in events. These are both wonderful parts of what we offer here at the airport. The Diner is both a restaurant and a living history exhibit, with surplus income being re-invested into the museum. Their new chef is certified in over 50 cuisines, so we have big plans to branch out with the catering and we will be able to provide any type of food experience a client is hungry for.”

In terms of capital improvement, Erie-Ottawa International recently completed an updated Master Plan in October 2020 and has been working on expansion and renovation by what has been laid out for the next number of years. The primary runway is due for resurfacing in 2025 – 2026 and will be the next major FAA funded project.

“Right now we’re very much focused on our pavement, and opening up additional development space with access to our taxiways and runways,” Finken says. “The FAA holds pavement as a cornerstone of their safety and development in airports. This spring we’re doing a total apron rehabilitation on the west side of the airport, which includes the area in front of our fuel farm, terminal, equipment hangar, and our primary corporate hangar. This will serve not only to rejuvenate the pavement but also to address some drainage issues. At the same time, on the other side of the airfield, we’re putting in two new taxi-lane fingers to allow the airport to build a six or eight bay T-hangar. This project will also provide space there for the private development of hangars. We have a waiting list of about 25 people, so we know there is a need for expansion.”

There are also plans to work on the terminal building. It had a facelift back in 2016 and they are now in the process of looking into different ways to remodel the building, which is shared with Griffing Flying Service. Eventually, in the next five to ten years, the goal is to build a new terminal building on the west side of the airfield. Finken admits, “It is a nice enough terminal for the moment, but we are rapidly outgrowing it. Currently, it features 24-hour access through a coded door, with vending machines, a coffee maker, crew-use computer, an ice machine, and all the necessities in our pilots’ lounge.” 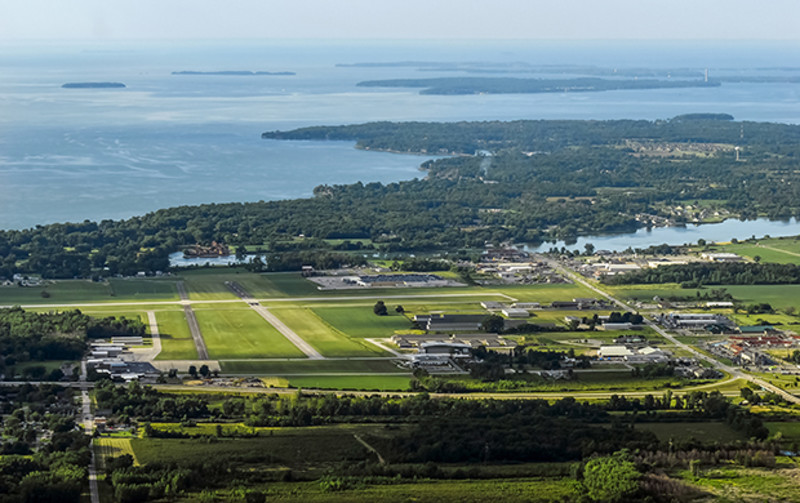 The airport supports several interesting community outreach projects. The first is through the Ottawa County Improvement Corporation and their Skilled Trades Academy, where the airport hopes to get an aircraft maintenance and parts training operation up and running as part of the program. The second initiative is the airport’s Junior Pilot Camp for junior high aged children, which is held each year. During the camp, students from around the area are shown all aspects of aviation – from physics, through orientation on small aircraft, and a buddy flight. There are also tours of the airport, including the repair shop and museum. The camp is designed to allow the students to explore the different aspects and facets of aviation and what careers are available in the industry. Prior to the pandemic, the airport was hosting multiple of the week-long camps each summer, which were scaled back during COVID, but the intention is to get them fully back up and running this summer.

“There are some new and exciting opportunities on the horizon as well,” Finken adds. “We are currently in preliminary conversations with some of the Vertiport folks. Ohio is going to be at the forefront of unmanned aircraft. They are doing a lot of work down in the southern portion of the state and Drive Ohio has approached us about getting involved with that technology. We were also approached by NASA regarding a project designed to monitor harmful algae blooms on Lake Erie. They are looking at the possibility of using EOIA as a forward base of operation for drone surveillance of these harmful blooms, which have a major impact on our region and Lake Erie as a whole.”

Moving forward, Erie-Ottawa International Airport is working toward self-sustainability with a multi-faceted approach. Finken shares, “We are using diversification to attract new business, while at the same time shoring up existing businesses. I am trying to cater to the needs of the community. That is one of my biggest initiatives, to understand what it is that users need and want from the airport, and to work diligently to those ends… not just to grow the airport for the sake of growing, but to make sure that we choose projects that drive our fundamental purpose – which is serving our community.”

What: A popular general aviation airport

Where: Port Clinton, Ohio; largest airport between Cleveland and Toledo