A sense of community with the room to grow

Established in 1743, Dover Township is a community with a lively history, from its early days as a farming and millwork town, to the time of the Revolutionary War, where many of its male residents were captured during the battle of Fort Washington. The Borough of Dover was part of the Township until 1864, when it was established as an independent community.

The same year, Dover Township was invaded by 3,500 troops, led by Confederate Major General Stuart, who were there to pillage for supplies. Fortunately, the town was expecting them and had hidden their valuables in advance of their arrival. Moving ahead to the 1940’s, Bob Hoffman, owner of the York Barbell company, purchased land in the community, where he hosted his popular York Health and Strength Picnics, bringing people from across the country. Hoffman later donated the land to the township, which is now home to Brookside Park and the Bob Hoffman YMCA. Today, the municipality is home to approximately 23,000 residents and is a growing community with a promising future.

Spanning 42.1 square miles, Dover currently has 9,000 households with a varied mix of housing options, including some that are aimed at allowing seniors to “age in place.” Director of Planning, John McLucas shares, “We are certainly a growing community. We have everything from multi-family housing for young adults, to townhomes and single-family attached homes for young families. We have single-family homes in very nice neighborhoods for the more traditional family. We have 55-plus communities, senior communities, convalescent care homes and senior care facilities, all within our community. We have affordable housing or workforce housing as well. Having that broad diversity of housing types within one community is certainly unique.”

The township continues to see growth in this area, with McLucas reporting that there are several developments seeking build-out approvals, some which were originally started in the early 2000’s. “I will say our multi-family housing has operated under a much lesser timeline. What we have built now was approved in 2018/2019. They are now fully built, fully occupied. That was about 220 units within the past two and a half years,” he adds. Dover Township is currently looking at a Planned Residential Ordinance which would allow for a mixed-use development, which McLucas says would “further spur the live, work, play, within one community.”

Business attraction is a priority in Dover Township, where an Industrial Commercial Development Committee (ICDC) was formed several years ago. Brian Caden, ICDC Chairman relays that the committee recently met with the Realtors Association of York to talk about the changing demographics in the area and what is attracting businesses in an effort to tailor future plans for Dover in the right direction. He says, “We are regularly looking at the parcels that are for sale, and as a committee, choosing which ones we consider to be a priority. As a committee, we also come up with what we would like to see as far as businesses coming to Dover. Then we tailor that parcel and advertise it for businesses to come, knowing that it is something that the community needs and wants. I think we’ve done a really good job of picking those priority parcels, figuring out what those demographics would look like, and then advertising.”

On the local business side, the Dover Area Business Association (DABA) was started in early 2020, just before COVID hit. “That was a little bit of a challenge for the association, but we’ve survived through it,” Caden admits, conveying that through outdoor meetings and social distancing, the association was able to move forward. “We adapted and grew. Currently, we’re at 19 businesses. I think that the one thing cool about the Dover Business Association is the interconnectedness.” he added.

With Dover Borough, Dover Township, Dover Area School District, Northern York County Police Department, and Representative Seth Grove and his chief of staff serving at all parts of the association, Caden believes that this offers a representation of the community it serves. Moving on from COVID, DABA holds a monthly breakfast meeting, with guest speakers who are relevant to local businesses. “We’ve had Northern York County Regional Police talk about business security, and Bob Hoffman YMCA talk about the programs they can offer for employers and their employees. We’ve had Alternative HR come and speak there, which was really intriguing. Business owners loved that presentation because it talked about how to navigate the complex HR world when it comes to hiring, firing, and all those steps in between.” 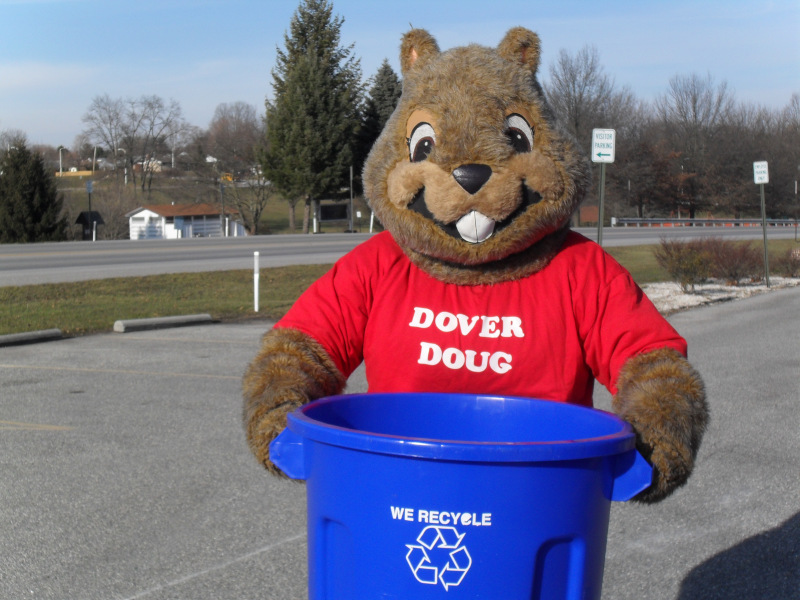 Although Dover Township has been utilizing Geographical Information Systems (GIS) technology since the 1990’s, a recent cataloging of each of the Township’s operations have made this even more efficient. McLucas recounts, “We have funneled them into an individual technology dashboard for every single department. That will allow for facilities to know what routes were driven during a snowstorm, or what the maintenance log is on a specific truck. For our department, we can log all the data associated with a new single-family home or a new commercial building, knowing what the approval timeline was, knowing what the inspection results were, all kind of tied back to that. That’s all done through our GIS data.”

The addition of 85” smartboards has created an opportunity for more effective digital meetings with businesses who are in the planning or expansion stages. Having the township’s existing plans available for viewing on the smartboard adds an extra layer of convenience. “We can find previous property information or plans that were laid out, which helps tie together the history for somebody planning a development project,” says McLucas.

In terms of valued partnerships, Township Manager Laurel Oswalt notes, “We are part of Northern Regional who have been in existence for 50 years. We were an original member for the entire 50-year period. They’ve recently expanded from 9 municipalities to 11, so they’re a continually growing entity.” She adds that Dover Township also partners with the Borough of Dover and the school district on initiatives that were outlined in the municipality’s 2020 comprehensive plan. Dover Area High School has a unique Career and Technology Program (CTE) with 10 Pennsylvania Department of Education approved CTE Programs which has grown significantly to 260 students in the 2021-2022 school year. The township and area businesses have also brought on interns from these programs, who in some cases are hired directly out of high school.

Working with area non-profits like New Hope Ministries is another opportunity for valuable community partnerships, with Dover participating in food drives and other initiatives to help those in need. As for community planning, residents are invited to serve on committees to offer their thoughts on the future of the municipality. “The recreation plan that we’re doing right now has members of the community from both the borough and the township serving on the committee to help shape how recreation will move forward,” Oswalt says.

The purchase of a 50-acre parcel will be a future community park in the township, and an exciting recreation opportunity. “It’s a five-phase project, and we’re in phase one. There’s going to be a baseball field, walking trails and disc golf, and eventually there will be playgrounds and an amphitheater,” explains Steve Parthree, Township Supervisor. “It’s going to be a highlight of the township, but also a highlight of all of York County when this gets done.” Investing in trails to connect communities and providing recreational spaces for residents to enjoy is an ongoing priority in Dover, where the donation of another 22 acres will be used for the development of ball fields and other outdoor activities.

A recently completed water and sewer upgrade in one of Dover’s oldest developments is one of many infrastructure improvements happening throughout the community. Moving residents who are currently on the borough sewer system onto a newly installed township system is also on the agenda for an area north of the borough which Oswalt reports will allow for expansion into an area which is zoned as a business park. Along with wastewater and water improvements, Dover also has 13 bridge projects underway, a $2.5 million investment. Where road work is concerned, the township is working with the developer of Dover Highlands, an apartment complex, and the Dover Area School District to expand a road which goes past the newly built high school and into the complex. This will result in an improved intersection and a pathway around the square in the borough. The community is also updating their fire department dorm facilities, a project that Oswalt says is overdue.

With so much to offer already, Dover Township remains committed to growth and opportunity, building on the qualities that make it an ideal place to live, work and play. “We have great businesses in Dover that you can have a successful career with, live in Dover, and retire in Dover,” asserts Caden. As for what might come next, he offers, “I’d love to see Dover become that place to go, because it has businesses that are attracting other people outside of the area. As a focus, we just need to continue what we’re already doing, to not only keep the people that are in Dover here, but also to attract others.”

What: A growing municipality with 23,000 residents