The Cresco Union Savings Bank (CUSB), based in northeast Iowa, was established in 1888 by Robert Thomson, great-grandfather of J. Scott Thomson, the bank’s current President and the fourth generation of the family to head the 132-year old institution. “My great-grandfather came here from Scotland in the 1870s,” Thomson recounts. “He started out on the east coast and ended up in Pennsylvania where he worked making ketchup for the H.G. Heinz Co. As the story goes, he asked Mr. Heinz if there was any chance he could buy into the company. He was told ‘No’ because there were a number of succession opportunities within Heinz’s own family.

“So, he left there and started a mercantile store in Milwaukee, Wisconsin. It was here that he learned to make “pocket loans” to people in need of money so they could buy on credit. He later sold the mercantile company and moved to southwest Wisconsin where he worked on a farm and also made loans to people on a handshake. He then moved to Cresco, where he made pocket loans out of the second floor of the local hotel. During this time, several local gentlemen said they’d like to start a bank and wanted him to be a part of it. So, he helped start that bank in 1888 and was named cashier. In those days, cashiers ran the bank. By the turn of the century, he was named President of Cresco Union Savings Bank.”

“My great-grandfather would ride out in a horse and buggy to rural schoolhouses and preach the importance of saving money for one’s future and pass out bank pencils,” Thomson continues. “When the Federal Bank Holiday of 1933 hit during the Depression, Cresco Union Savings Bank was one of only six banks in the State of Iowa that was allowed to reopen on the first day after the four-day Federal Bank Holiday. The bank grew in the late 1930s and 1940s as my grandfather, Perce, and my uncles, would encourage and help farmers purchase more land based on the size of their families, which, in those days were the farms’ main labor force.”

According to Thomson, the bank’s corporate culture is based on five pillars, which were borrowed from Mike Krzyzewski, head men’s basketball coach at Duke University. The first is Communication. “Why?” he asks. “Because two out of three businesses fail in the first three years because of three primary circumstances: 1) they don’t have enough capital to keep going, 2) they don’t have a strategic plan, and 3) they don’t communicate; the right hand doesn’t know what the left hand is doing. So, we strive to make communication with our staff and our customers one of our top goals.”

“Then there’s Trust. People do business with people they trust and respect and that’s the kind of people we hire. Third is Collective Responsibility. Have you ever called a business expressing a problem only to be told, ‘That’s not my job.’? Well, collective responsibility means it’s all our jobs. If you don’t know an answer, you find someone who does. So, we’re responsible for each other. If I’m out for a day, I get the guy next to me to cover for me, just like he would expect me to cover for him.

“The fourth pillar is Caring. Whether we like to acknowledge it or not, we spend more time together as a bank family than we do with our own family. We’ve seen births, deaths, marriages, and divorces. We have empathy for those we work with. We celebrate the good times and offer support during the tough times. If we do those four pillars well, which I think we do, then we have the fifth pillar, which is Pride. We take pride in who we are, pride in how we take care of our customers, and pride in how we take care of the communities in which we’re lucky enough to serve.”

“That’s our foundation,” Thomson asserts. “In addition to that is what my dad, Jack, taught me, what his dad taught him, and what his dad taught him and that is “The Golden Rule” – treat other people how you would like to be treated. And that’s how we live it. Our turnover at this bank is around three percent. This year, we were nominated by our employees, and received, for the fifth time, the award for being one of the Top 100 Places to Work in the State of Iowa.”

Thomson adds that CUSB Bank also does things that other banks don’t do. For example, instead of an exit interview, which is normally done when an employee leaves a job, CUSB Bank conducts “stay interviews” at least every two years so employees can get a better idea of how they are performing their roles, what they’re doing right, what things they can work on to improve, and what their goals are going forward. “We also have a very strong onboarding program and a good job-shadowing program,” he notes. “If you think you want to move to a different department, we’ll have you job-shadow. And then, if a job opens up, we always post it internally for the first three days, before sending it out to the public.”

“We started a program about five years ago called ‘Work Smarter, Not Harder,’” he notes. “With this program, we take a process or procedure that may flow through several departments and evaluate how we can improve that process or procedure. We have the staff members that do the actual process for that department map out the process from start to finish, along with the person in the next department who also maps it out. Then we label all of the steps in the process as either 1) value-added, 2) needs improvement, 3) of no value but still essential, or 4) pure waste. For example, a debit card dispute used to be run through two different departments and involved 79 steps. We took that down to 43. We did that by having people that do the process determine how we could make it better. We consider the ‘Work Smarter Not Harder’ program a win-win for the bank, employees and valued customers.

“Also, I’ve never been afraid, and my forefathers have never been afraid, to put money towards staff education. We do zero-percent/no interest loans to bank employees who want to buy technology. They then pay us back through auto-debit on their paycheck. The thought is, if you’re going to spend time on a tablet, or a computer at home, you’re going to be more efficient when you come to the bank. We also have a 401K program, profit sharing, and incentive programs on a quarterly and annual basis.”

While old-fashioned values remain the core of CUSB Bank’s culture, Thomson maintains that it has also kept up-to-date with the new technologies that the modern banking universe now requires. The bank runs its core operating system with Jack Henry’s Core Director Software. It also partners with RSM, the nation’s fifth largest accounting firm, and its FIT (Financial Institution Technology) program that covers software upgrades for servers, routers, and switches, IT compliance, and the IT Vision Help Desk.

“And we’re putting money towards additional technology products and services,” Thomson states. “We also provide the necessary training for our staff to better educate our customers. We have a studio in the basement where we do how-to videos that we put on our website so our customers know, for instance, how to do digital banking, how to do a remote deposit, or how to do person-to-person payments. If you have problems, we have a live chat option within our e-banking app where customers can ask questions and receive answers from bank personnel. We have applications for mortgage loans and installment loans online, and, within the next six months, it will be possible to open up a deposit account online.

“This technology works hand-in-hand with our partnership with Haberfeld for customer acquisition strategies. This includes offering free checking, a free gift, and cash back for unused debit cards and checks from another bank. Through the Haberfeld program, the entire bank staff has been taught how to open up an account within three minutes. We train on that and we have a cross-sales ratio of about seven products and services: e-banking, digital wallet, mobile deposit, bill pay, e-statements, and more, tied to an opening of an account.”

Going forward, a fifth generation of Thomsons are preparing to take up the reins of CUSB Bank’s management. All three of J. Scott’s children – Samantha, John, and William – have worked at the bank during high school and/or college. John has worked in the Osage office for two years and William is currently a credit analyst for Bankers Bank of Wisconsin. The hope is that they will all return to the bank at some time in the future. 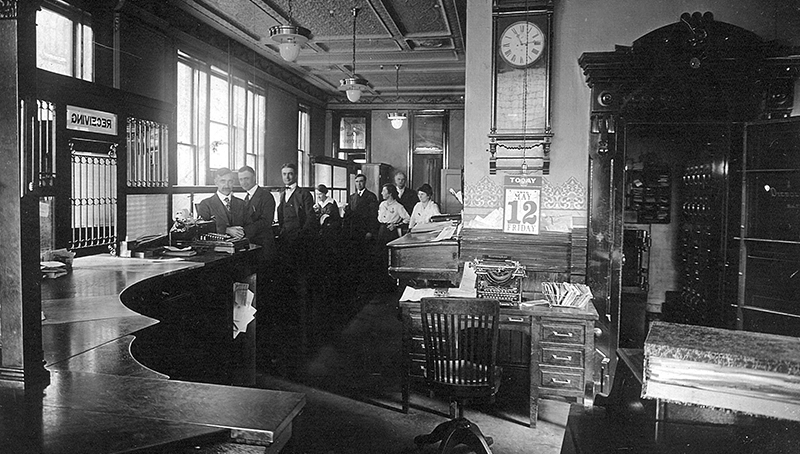 Meanwhile, the bank’s three-year plan, completed in 2019, calls for CUSB Bank to be a $1 billion institution by the end of 2027. J. Scott will be transitioning to the role of CEO by the end of this year, and Michael Drees, current Senior Vice President, will take over the President’s chair. “I will shift my concentration to acquisitions and mergers as well as continuing to head CUSB Bank’s philanthropic endeavors,” Thomson relates. “Historically, CUSB Bank has given back to the communities we serve four to six percent of our net profits in the way of challenge grants, donations, and pledges. I have been told that is roughly twice the amount that most banks give back. We realize that the bank is only as strong as the communities we serve, and we take our responsibility to the communities we serve very seriously.”

“Our Vision Statement states that our emphasis will be on providing high-quality products, services, and expertise, with a technological platform that allows CUSB Bank to serve our long-time, loyal customers, as well as the next generation of customers. In order to do this, we will have to continue with a culture that fully embraces technology with an emphasis on our five pillars. We will also need to continue to emphasize employee development and succession. As we work towards those goals, we will operate in a prudent, progressive manner that is conducive to sound fiscal management and integrity.”

WHAT: A family-owned community bank

Flatwater Bank – The steady and calm...