Bank of St. Francisville – The little bank that could

The little bank that could

Business View interviews representatives from the Bank of St. Francisville for our focus on Community Banks in the U.S.

When the Bank of St. Francisville first opened its doors more than 40 years ago, they were the underdog. The newly-minted operation in St. Francisville, Louisiana was operating out of a trailer and had to compete with an older, established bank for a place in the town of 1,500 people.

“We didn’t feel like that bank was meeting the needs of the area, so we decided to get a National Charter,” says Conville Lemoine, Chairman of the Bank of St. Francisville Board. “But the owner of that bank was able to fight it through our U.S. senator. He kept squashing it.” Despite the hiccup, Lemoine and then-president and founder Carter Leak III pushed on, opting to become a state non-member bank. But this didn’t set the Bank of St. Francisville back.

Within one year, the bank had outgrown its tiny trailer and moved into a 3,300 square-foot building in St. Francisville’s historic downtown. The bank’s handful of employees grew and grew, and soon they were bursting at the seams, adding an addition onto the building and eventually opting to tear it down and build an all-new 18,000 square foot property on the same site where they began. “There were probably about five employees when we started the bank,” Lemoine says. “And now, we have close to 40.” And it’s not just the building and employees that have grown over the years – the bank’s assets have grown exponentially, too.

Today, there are two other banks in the small town but the Bank of St. Francisville has outgrown them both. “We consider ourselves the community bank,” Lemoine says. “There are two other banks and one is a big regional bank, Hancock Whitney, which bought the old bank in town and it’s basically a branch with five or six employees. So they’ve gone from being the big bank to now just a little branch of a big bank. And there’s another bank from nearby Baton Rouge that has a little branch here, with about five or six employees. So I think the community considers us the bank of the parish.” 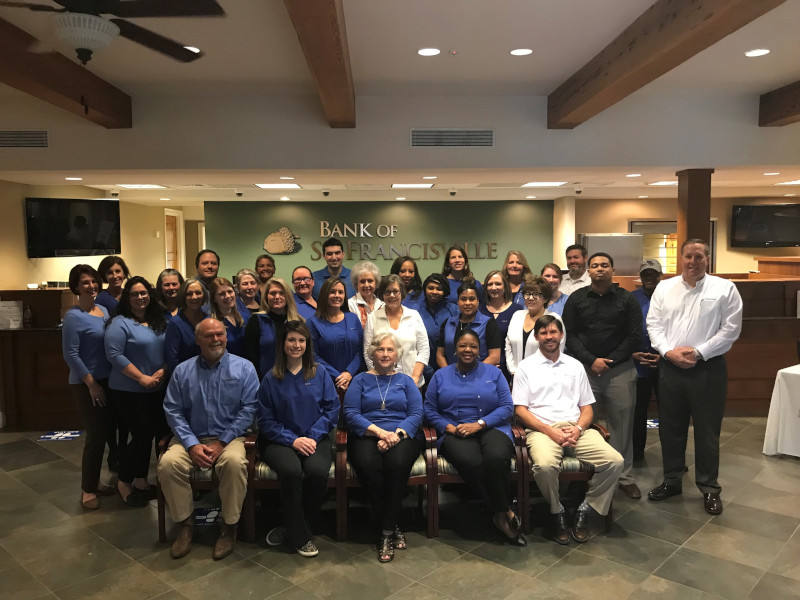 Many local businesses use Bank of St. Francisville’s services, and the bank has a loyal following, now seeing its third generation of customers coming through. “Everyone comes to us,” says Lemoine. “I think the majority of businesses in town bank with us. It’s different here than in a city. It’s a lot of mom and pops; we don’t have the Walmarts and Walgreens and those type of businesses. That’s the kind of community we have and we’d rather just keep it that way.”

The Bank of St. Francisville earned its unofficial ‘bank of the parish’ title because of how it treats its customers and continuously evolves to meet their ever-changing needs. When they initially opened, the bank offered traditional services, but was also a community hub for customers. “I remember when we first started, we had a lot of older folks and every day they would come by, have a coffee, and maybe read the paper,” Lemoine reminisces. Then when the internet age came about, the bank was ahead of the curve, not only providing financial services to the community, but internet as well.

“We were actually the ISP internet provider for St. Francisville for probably 10 years,” Chaffin recalls. “Before anyone else had internet. You couldn’t get it up here, and Carter Leak III was saying “I want internet service.” The only way we could get it was to actually become the internet provider, which was a great deal going forward because when we got ready to add internet banking, we already had all the customers.”

Today, the bank is known for its tech savvy and online banking options. And they aren’t going to stop anytime soon. They’re always looking for new options to best suit their customers. “Our priority is to continue growing electronic banking,” Chaffin says. “I’ve hired a couple of young people to try to help us figure out what it is that the next generation wants and needs. I asked a young man the other day, ‘I’m the old guy, but I know you don’t like banking the way I bank, so what is it that would really excite you about banking?’ And so we’re trying to figure out the path of electronic banking and thinking about the future, too.”

“We did a lot of new things because of COVID, it just made us speed up,” says Chaffin. “We were not doing online lending but wanted to before COVID started and it made us jump out there and figure out how to do the different pieces that we needed to do. And, we’re now able to do online deposits where you can open your account and everything online.”

Keeping up with the latest technological advancements has always been a priority for the bank, thanks especially to Carter Leak III. “Every time Carter III turned around he had a new gadget. It wasn’t necessarily to do with banking, but he always had something new,” Chaffin recalls. “When cell phones came out, we had to have them. He’s a big driver of where we are today.”

“Without his influence, the Bank of St. Francisville wouldn’t be where it is today,” Lemoine adds. “He’s the person who got this thing going from the beginning. He was the one who pushed for technology. We owe a lot to Carter III for where we are. He is our leader.” 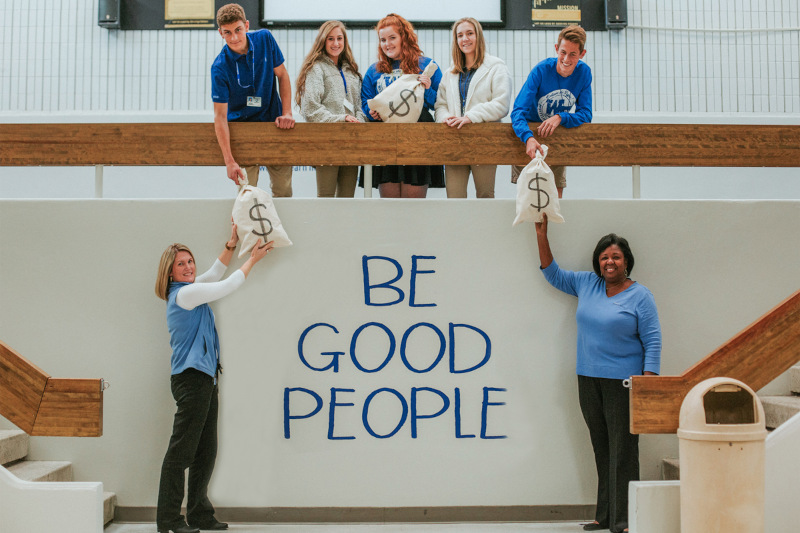 Bank of St. Francisville continues to push the envelope to this day, even going so far as to expand outside of St. Francisville. Plans are in the works for the bank to open a new branch in Baton Rouge in the near future. “That’s the growth trend,” Chaffin explains. “Everything seems to be moving toward the Baton Rouge area. “Speaking to one of my loan officers the other day, he was saying he thinks we’ve probably penetrated 90 percent of the business here in town, and so unless we get new businesses – which we are – you can’t pick up more. So we are branching out.”

With the new branch comes even more opportunity for technological advancements. “We have an office and a couple of guys down there in Baton Rouge, but we want them to look like they’re right here with us,” Chaffin explains. “So there’s a lot of technology that goes into that. We are trying to decide whether to go with the ITM – Intelligent Teller Machine, where it’s like an ATM but it’s got a live person available.”

The expansion will also help the bank continue to serve the community and its customer base, says President and CEO Carter Leak IV. Already, they estimate that about $30 million of the bank’s $210 million in assets comes from the Baton Rouge area. He shares, “We want to grow and allow our employees to continue to grow in their roles. Our local economy in St. Francisville is impacted by our ability to grow and I think the expansion works together for the good of our communities and our customers.”

As the Bank of St. Francisville moves to the future, their hope is to continue on the path they have forged over the past four decades, seeing steady growth, evolution and satisfied customers. “The main priorities are to serve our customers, our local community of St. Francisville, and Baton Rouge in a way that we have for the past 40 years,” Leak IV says. “I think our industry is changing significantly as we fully embrace this digital age, and I think that’s something we have the desire to utilize to serve our customers. But I think there’s so much more that our customers deserve – that we care for them and know them and build long-term relationships and see them thrive.”

What: A popular community bank with $210 million in assets

Your financial institution has unique equipment and security requirements and Bank-Tec South (BTS) handles these as a partner with professionalism and expertise while keeping an eye on the increasing concerns today’s world brings. With 35 years of continuous ownership, top financial institutions in Louisiana, Texas, Oklahoma, Arkansas, Mississippi, Alabama, Tennessee, Missouri, and Florida rely on us as a complete, cost-effective solution.

Security is more than a buzzword – it’s an important facet of everything we do. We service, sell and install almost every type of financial institution equipment you can imagine: from currency counters to ATM’s – from safes to vaults and alarm and video equipment to drive-thru lanes. Whether you need new equipment or service on your existing equipment, our licensed and insured, factory trained employees that live in your footprint are here to help.

In addition to offering the latest in ultra-secure, state-of-the-art equipment, BTS follows new technology trends and product advancements with an eye towards improving customer experience through increased uptime while addressing your institution’s growing security concerns. We understand your continued brand success relies on a partnership that maintains your substantial investment in customer facing equipment.

BTS is with you every step of the way ensuring your success – today AND tomorrow.