COE Distributing, with headquarters in Smock, Pennsylvania, is family-owned, wholesale office furniture company, originally established in the 1940s, by the grandmother of its current President and CEO, J.D. Ewing. “The start of the company goes back quite a few years,” says Ewing, “but the wholesale arm was founded in 1986, and I’ve run it since 1989. We grew the company from less than a quarter million dollars at the end of 1989 to over $21 million in early 2006.”

Ewing’s successful run attracted the attention of investors who acquired the company in a roll-up acquisition that same year. (A rollup is a process where multiple small companies in the same market are acquired and merged.) “We were the third of five acquisitions in that roll-up,” Ewing continues. “I, as well as the bulk of my staff, stayed on to work for the acquiring entity and subsequently, three and a half years later, they filed for bankruptcy and were shutting down the business. I took the opportunity to buy it back out of bankruptcy and restart the company.” The gamble paid off. Ewing took the company out of bankruptcy in late 2009, and re-opened it in January 2010. 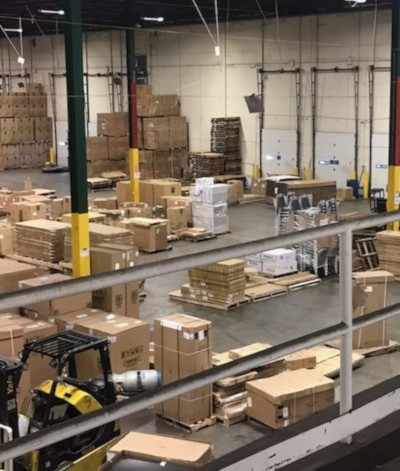 Today, COE Distributing has two distribution center/showrooms – one in Uniontown, Pennsylvania, an hour south of Pittsburgh, and another in Charlotte, North Carolina. Its products are sourced domestically, as well as from Canada, Mexico, and South America, specifically, Brazil. It also brings in product from Malaysia, Taiwan, Vietnam, and China. It wholesales to national e-tailers and retailers, such as Wayfair, Staples, and Amazon. “But a lot of our business, historically, and still today, has been the traditional, single location, brick and mortar, office furniture resale,” Ewing stresses.

Ewing believes that what differentiates his company from the competition is the depth and breadth of its product mix. “We are the largest, single source supplier to the resale community in the U.S. of laminate desking,” he says. “And we complement that with a significant variety of seating options and accessories – also filing cabinets, cubicle panels and dividers, and other office furniture and office furniture accessories.”

Today, the company employs a staff of 80, plus about 20 full-time temps, complemented by third party contractors, vendors, traffic managers, and a dedicated logistics fleet. Ewing adds that, “Our other distinct advantage that we are proud of, is that we have an educated, outside sales force. The majority are third party, independent sales organizations and we cover 40 states with the sales group; that includes everything east of the Rockies. So, our geographic footprint has expanded over the course of the last nine years. In the last two years, we’ve expanded into Texas and we are in the process of expanding into Chicago and the Midwest, in general.”

Regarding the company’s facilities, Ewing reports several recent changes: “We moved our Charlotte facilities from a 70,000-sq.-ft. warehouse to a 165,000-sq.-ft.facility that was 15 miles away. We fully integrated the new facility, which gave us the ability to reduce overflow facilities, so all product for our Charlotte distribution center is under one roof. It created significant efficiencies both inbound and outbound, and quicker turns on product getting to the customers. Growth out of that facility, this past year, is about 25 percent over 2017.”

“We’re also putting the finishing touches on our Pennsylvania facility, where we went from 125,000 square feet to 270,000 square feet and we eliminated three overflow facilities in the process,” he continues. “So, we went from four different physical plants to one. With everything being under one roof, we get the same efficiencies both on the inbound and the outbound, and we’re continuing to evolve the product location within the facility to drive greater efficiencies on the outbound picking and truck-loading process.”

COE Distributing has also been on a hiring spree that began about a year ago. After being interviewed and reference-checked, job candidates are grouped into one of three categories: A Players, B Players, or C Players. A Players have the most potential for high performance in their role while B and C Players may require more work to be successful. “One position was created, two were replaced, and we feel, very strongly, that we’ve put ourselves in a much better position by using a version of topgrading, selecting candidates that best fit our culture and can help our business grow,” Ewing adds. “And we’re very pleased with the results.”

Going forward, Ewing reveals that he wants the company to continue to develop its product mix to “stay ahead of the curve and what our competitors offer. We do that by continually researching what the top-tier, global, furniture manufacturers are producing and what our customer base is looking to sell into today’s workspaces,” he says. He further notes that the modern work environment is changing dramatically – sometimes evolving, and sometimes devolving. “We’ve actually seen some of them going back to cube style workstations because the recent trend and binge towards open office and taking the walls down led to an environment where people could not hear themselves think. And they discovered that they needed the privacy that the cubicle walls provided. So, we’ve seen a little bit of shift going back in that direction. So, reacting to those changes continues to be our focus and it’s a big challenge, because the changes happen much quicker as each year goes by; what’s been in vogue goes out very quickly.”

An additional goal for 2019 is to add another potential acquisition to the one that the company made last November. “Completion of that acquisition solidified our belief that we could combine our successful Greenfield growth with the right acquisition and we’re hopeful to complete at least one, if not two, acquisitions in 2019,” Ewing relates. “And any of those would be complementary to our human capital piece; we would not be doing an acquisition if we did not feel that there was a significant benefit to the people that were in place at the acquired business and that they would add to, and provide us with, a better internal operations group to better serve our customers. In addition to the human capital piece, it would have to be complementary to our distribution expansion plans in the Midwest and Southwest. So, in conjunction with that acquisition, we’re looking to add, from a Greenfield perspective, a distribution center in the Houston market in Texas.”

Yet another agenda item is an upgrade of the company’s business operating system. “A new platform will happen mid-year,” Ewing suggests. “Along with that, there’ll be a significant upgrade in our warehouse management component with much tighter controls on product location, as well as keeping our supply chain more consistent with the anticipated demand.”

With all of these changes happening, one thing that has always been consistent at COE Distributing has been the company’s focus on employee engagement and skills building. Recently, Ewing reports that he’s instituted a continuing education process for all employees. Each quarter, a book is chosen that relates to better business practices, and small groups get together, weekly, to discuss what they’ve learned. “We try and select books that have both a personal slant as well as a business slant, so it’s not one-sided and has value,” he says.

In the end, Ewing maintains that what has truly allowed COE Distributing to be successful “boils down to timing and hard work. I truly believe that there is no magic wand,” he says. “You can’t just make a company great. There’s a lot of hard work involved. It takes continual effort and hard work from all the team members, new and old.”

WHAT: A wholesale office furniture company 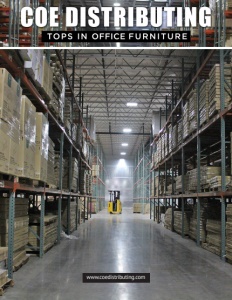