City on the move

Cathedral City, California, one of America’s “Most Livable” cities is home to fine resorts, dining destinations, shopping venues, and family-centered recreational facilities. Among the community’s plethora of diverse attributes, visitors love the hometown vibe and outdoor activities, residents enjoy an excellent school system and friendly neighborhoods, and local businesses thrive in an atmosphere where development opportunities exist. Thanks to pro-active, forward-thinking municipal leadership, “Cat City,” as it’s affectionately known, is on the move and working hard for the future.

Situated in Riverside County between Palm Springs and Rancho Mirage, Cathedral City has the second largest population of the nine cities in the Coachella Valley of Southern California. In the far distant past, Cahuilla Indians lived throughout the Valley for more than two thousand years. Then, in 1876, the Agua Caliente Band established their reservation which encompasses more than a quarter of Cathedral City. Two decades earlier, Col. Henry Washington of the U.S. Army Corps of Engineers named this area of majestic “cathedral-like” geography, Cathedral Canyon. In 1925, four developers concurred and called the region’s first subdivision: Cathedral City, California. 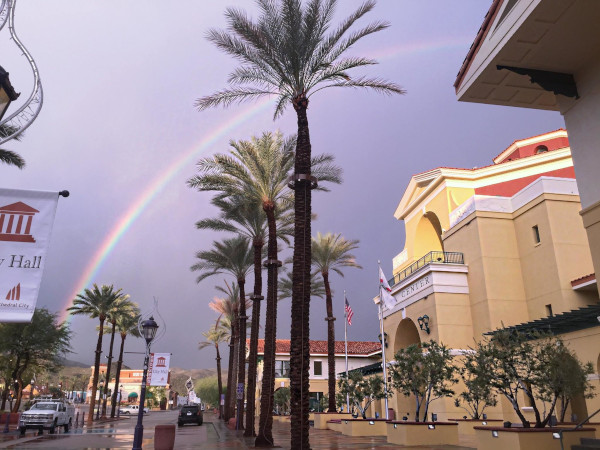 Mayor Mark Carnevale asserts, “Cathedral City is a working community. We don’t have the luxuries of popularity that surrounding cities have – we only have a few hotels and golf courses and shopping centers. No major malls. We’re kind of a bedroom community. Years ago, we had the redevelopment money taken away from us because the recession hit, so Cathedral City just laid low; didn’t progress. Then, in 2014, we were fortunate to have a really strong council come aboard – a new City Manager, a new Police Chief, a new Fire Chief – we all got together, started working hard, and things really began happening for Cathedral City. Back in 2014, we were pretty much lacking any kind of backup funds. Now, we’re close to $21 million in reserves, a nice nest egg, so the city was able to be financially secure, moving forward. That’s important for businesses and homeowners to know. We are, honestly, a city on the move.”

The biggest concern for council at that time was public safety. So, they built up the police department into one of the finest in Coachella Valley, and now have one of the lowest crime rates in the region. The fire department is fully-staffed with firefighters and paramedics. Infrastructure improvements were also needed. In that regard, the city widened the bridge on Date Palm Drive – the main line out to the freeway. One block west of that, construction of a new bridge will begin in 2020 to replace Cathedral Canyon Bridge, which washes out and causes major traffic congestion every time there is local flooding. In addition, the widening of the Ramon Road and Landau Boulevard Bridge, which connects Cathedral City to Palm Springs, is causing excitement in the community.

“Our infrastructure is really moving forward,” the Mayor reports, “with about $100 million in road paving and road construction done. We’re working hard to improve the aesthetics of the city, as well. To attract businesses here, we hired a great Economic Development Director. He’s out there knocking on doors and getting it going. We also hired an Activities Director who puts events together and runs public relations and communications. We now have one of the largest balloon festivals in the Valley; our events attract thousands of people and there’s a lot of diversity – Latino events, LGBTQ events, events for children – and we’re very proud that, in 2017, we became a Sanctuary City.”

Currently, Cathedral City is in the midst of a $4 million amphitheater project in the downtown core. It received $1.4 million in federal grant funding via the state, for park development, and a local non-profit in the community contributed an additional $1.4 million. City council topped up the coffers with the extra funding necessary for the build. Construction is now underway and the amphitheater will open in January, if everything goes according to plan. Cathedral City’s population is 57,000; during the season when the snowbirds come in, it swells to around 80,000. Despite the influx of seniors at different times of the year, the average age of year-round residents is 36, making it one of the younger cities in the Coachella Valley. The majority of the population consists of working people with families.

City Manager Charlie McClendon notes, “We have a couple of hospitals in the area that are major employers. And many residents are employed by the school district, and the local community college – College of the Desert. We also have a lot of people employed in our strong small business sector. And we are home to the growing cannabis industry, which is new to California since Proposition 64 passed in 2016. It’s been surprising to me, the number of jobs associated with that industry –  those companies have invested tens of millions of dollars in rehabbing formerly vacant industrial buildings in our community.” Sunniva, a public, Canadian cannabis company is building a 350,000-sq.-ft. indoor cultivation facility that will be one of the largest in the area. It is expected to open in the fourth quarter of 2019. The city is pleased to have the company in the community, since it will employ a large number of people and tax revenue will be very strong. 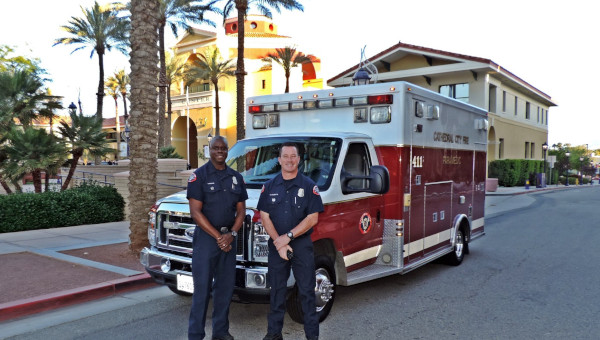 In other news, Cathedral City has been chosen by the Agua Caliente Band of Cahuilla Indians as the location for their third licensed casino. It will be established in the downtown area on the corner of Date Palm Drive and Highway 11; they are just waiting for the federal government to sign off on it. The casino project ties in with a 13.5-acre development across the street, featuring restaurants, hotels, and some residential housing. With those projects and the community amphitheater, Cathedral City is expecting to have a complete and vibrant downtown within two to three years. On the sustainability front, the city is home to a 14-screen movie theater; one of the only theaters in the country entirely powered by solar energy. The complex not only has solar panels on the roof, but also battery storage and is located right downtown, next to city hall. Along with the theater, all of the city parking structures downtown have rooftop solar, which covers the cost of powering municipal facilities in the area.

According to McClendon, “In our general plan for high-density zoning areas, Date Palm Drive from Ramon Road to the freeway is zoned for businesses, and homes above the businesses. All of the zoning in the downtown core allows mixed-use projects – that includes commercial, office, hotel, and residential. To accommodate the ‘snowbirds (the retirees), the city has several RV parks and they fill up to the max. A lot of them stay in mobile home RVs, and the Cathedral Canyon Country Club has well-established rental options, as well. Plus, there is the Date Palm Country Club – a lot of Canadians own year-round homes there and it also has rentals. And, of course, we have hotels. And short-term vacation rentals like Airbnbs have become really popular (we have over 300).”

Speaking to the best attributes of Cathedral City, Mayor Carnevale says, “We have a city council who pays attention to the residents. It’s a community like no other – all the events we hold with the Chamber of Commerce, our ties with the Visitors Bureau. The coolest thing is that Cathedral City really cares about everybody and wants to grow. There is so much opportunity here for large and small businesses, for investors, for retirement. Most importantly, it’s a friendly city that’s moving forward.”

McClendon adds, “Our goal is to be known as a business-friendly community, so we make sure all our development processes and our fee structures are not going to be a problem for new businesses and new developments. The motto of our council is ‘Get to Yes’.”

College of the Desert – www.collegeofthedesert.edu