Situated in the lush, rugged hills of southwest Martin County, Kentucky, Big Sandy Regional Airport is a glorious fly in and out spot for any pilot. With its high altitude of 1,222 feet and 5,000 by 100-foot runway, boasting a majestic drop-off of close to 200 feet, Big Sandy Regional is one of a kind.

Built in the early 1980s and active since 1986, the airport’s infrastructure is built on a reclaimed surface mine near the City of Prestonburg. Initially, Big Sandy Regional Airport played host to the Eastern Kentucky mining sector, but the heyday of the coal industry has passed. Nowadays, people are pouring investments into the region, namely in apple farming. These apple farmers are taking notes from the development of the airport, by situating their orchards on reclaimed surface mines.

The region’s topography of rugged sprawling hills makes it challenging to complete big construction projects at the area’s airports. This means that a sizeable 5,000-foot runway like the one at Big Sandy Regional Airport is relatively uncommon in the eastern part of Kentucky. Runways shorter than 5,000 feet can’t accommodate private aircraft because they aren’t insured when they land.

While the size of the runway is a huge plus for Big Sandy Regional, it has created some issues over the years, namely with safety regulations. In the 1980s, when the runway was built, the regulations were different than today – currently, the federal government requires 300 feet of grass for the runway safety area (RSA). “The federal government has been trying to shorten the runway for 15 years, but as anybody knows in aviation, that 5,000 is a magic number,” says Gary W. Cox, Airport Manager at Big Sandy Regional Airport. 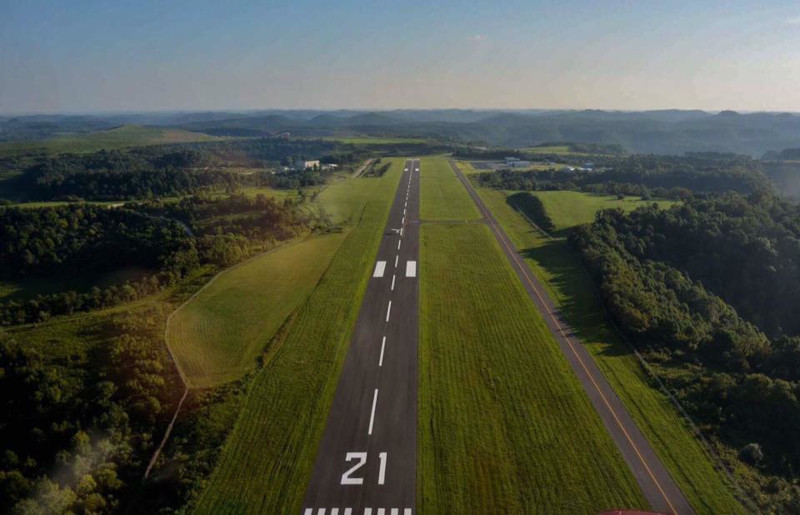 In 2018, Congress passed an aviation budget that provided one billion dollars for development projects. This also prioritized non-metropolitan airports, with a focus on safety. All these elements made Big Sandy Regional airport the perfect candidate for funding. The airport’s engineers drew up plans to add additional footage to one end of the runway. But there was an additional issue – ownership of the land.

As mentioned, the airport was built for and by the mining industry. The mining sector donated the airport to the federal government with a clause that they could still use the land for their mining vehicles to cross the valley. This meant that the additional runway safety area still had to accommodate large mining vehicles, which was impossible. The innovative engineering solution by Garver Aviation Engineers was to construct a tunnel so they could go under the area.

So far, the project has taken roughly ten months to complete, and there are a few more on-site tasks to be completed. While this mammoth project was underway, the airport was still open for business,
operating with 4,200 feet of runway. During construction 50 feet was added at one end and 50 feet was taken away at the other end. When all was said and done, the finished runway now has 5,050 feet for take-off and 5,000 feet for landing. While these renovations were happening, the runway also received a new coat of paint and was resealed.

Big Sandy Regional Airport conducts its own fixed-based operator (FBO) services. It also boasts a terminal building that houses all the basic amenities and a conference room. Also attached to the terminal is what management considers a ‘community hangar’ for aircraft.

Until recently, the airport ran on a tight budget, saving up for the extensive SRA project. Cox admits, “We couldn’t spend any of our funding on anything that would make the airport revenue, such as T-hangars. But this being said, we could spend on safety assets such as fencing, lighting, and asphalt.”
Now that the safety overrun project is almost complete, management can spend its airport improvement program (AIP) money for the first time in 15 years.

Big Sandy Regional Airport is owned by four counties: Johnson, Floyd, McGuffin, and Martin. Members from these counties form the airport board. Board members managed the saved funds well, as you can only hold onto the AIP funding for four years. This required them to bank the money into loan funds for other airports. And during this period, everyone on the airfield paid rent, including the management team. When the funding had been allotted to the safety overrun project, the airport’s board could still build an additional nine-bay T-hangars thanks to outstanding debts due in their favor. This new project was handled by JAVE Construction, who Cox credits as being “very responsive and efficiently completed the work, with only minor supply chain issues due to the pandemic.”

With the two latest major projects completed at the airport, infrastructure at the airfield is now in great condition. Management is actually finding an issue with where to spend their budget, but they have indicated that funding will go into maintaining the ramps. 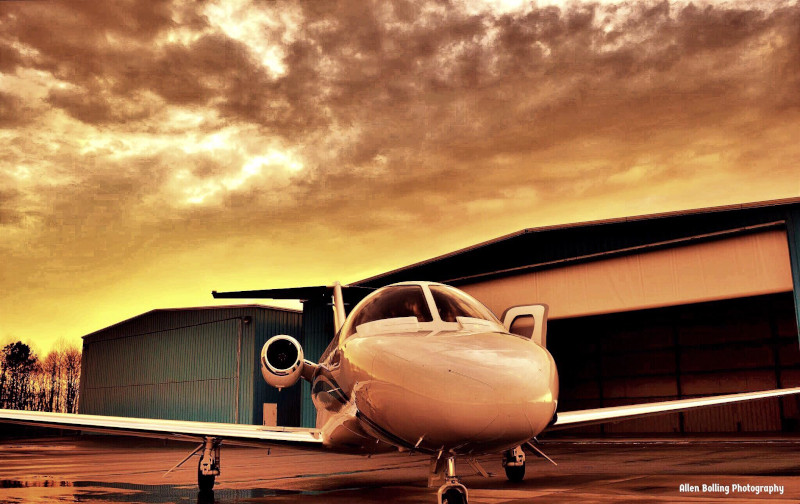 As with the industry nationwide, there are keen aviators wanting to book their aircraft in the hangars. A maintenance facility is also slated to be established. The airport is already home to an aviation painting facility, where the Blackhawk helicopter from the television show ‘Diesel Brothers’ was recently being painted. Hawkeye Helicopters are based at the airfield because the eastern part of Kentucky is rich in natural gas and coal, hence a plethora of gas pipelines. Most of their aircraft are equipped with hi-tech equipment to monitor whether there are any gas leaks along these pipelines. While snow can occur in the region, it’s not a major issue, although the Big Sandy Regional team has fondly named their snowplow Big Red.

In the next few years, Cox shares that the airport would like to move towards attracting visitors and transitioning to tourism. He notes, “Trail rides are popular in the surrounding area, and we’ve been thinking of developing accommodation on the field, where individuals can fly in, book a cabin, explore, and then take off home.” Eastern Kentucky’s landscape doesn’t exactly lend itself to the development of large airports, with all three in the area being constructed on reclaimed surface-mine land. But with the shift in the region towards tourism, there’s hope.

Looking ahead, Cox says, “I wish young people in Eastern Kentucky would start dreaming more about entering the aviation field. There’s a nationwide shortage of pilots. We need to start training new pilots now.” Eastern Kentucky University has a flight school located in Richmond, Kentucky but while Big Sandy Regional isn’t home to any flight instructors, they do, from time to time, operate out of the airport.

Cox hopes to attract a new generation of Eastern Kentucky aviators using the potential at the airfield, acknowledging that others from away see the possibilities. He shares, “We had a Texas pilot land at our airfield who couldn’t get over the beauty of the airport’s location and the length of the runway. At the time of the encounter, Big Sandy Regional airport had just roughly 19 airplanes and two helicopters. The Texan was shocked, as his 4,000-foot field at home was home to 300 aircraft. I then asked him if his dad was a pilot, to which the Texan replied yes and so was his grandfather.”

Work to attract tourists to this beautiful region of the country is an ongoing labor of love. Big Sandy Regional Airport management is planting fields of wildflowers, and the state has introduced herds of wild elk to the area, which attract visitors as the animals have made the airport surroundings their home. People can enjoy these incredible scenes from the comfort of the onsite restaurant – Cloud Nine Cafe.

Gary Cox has an obvious passion for Big Sandy Regional Airport and the whole region, boasting, “This has to be one of the prettier places in Eastern Kentucky.”

These US states are most at risk...