Business View Magazine interviews representatives of the Alexandria Transit Company (DASH) for our focus on Public Transit in U.S. Cities

Located seven miles outside Washington, D.C., Alexandria, Virginia is known for its big-city amenities and small-town charm. Many of Alexandria’s 159,200 residents are employed in the nation’s capital and having access to a reliable bus service is essential for a stress-free commute. This is where the Alexandria Transit Company, also known as DASH, excels. The locally owned and operated public transit provider connects with the Washington Metropolitan Area Transit Authority’s (WMATA) Metrobus, Metrorail, and Virginia Railway Express, as well as local bus systems. Every day, the Alexandria Transit Company’s commitment is visible as it transports citizens throughout the city – highlighting DASH as a fitting acronym for Driving Alexandria Safely Home.

“We are largely considered the primary public transit provider within the city,” explains Josh Baker, Chief Executive Officer/General Manager of DASH. “We’re the go-to for providing local transportation to move people around Alexandria. Working in partnership with the City of Alexandria staff, inclusive of their Transportation & Environmental Services division, we serve commuters in and out of the city and D.C. We’re a feeder system for WMATA’s bus and subway systems connecting them with Metrobus or Metrorail stops. We also operate the free, and quite popular, King Street Trolley. We’re a medium-sized transit company with over 100 buses and approximately 256 employees. There are 170 bus operators, and the rest are maintenance or admin employees.”

The fleet is incredibly diverse, ranging in size from 30- to 60-foot transit buses. DASH is a leader in Northern Virginia for its electric buses; currently, it’s the only transit company in the region operating these buses, which have been funded by state and regional grants from the Virginia Department of Rail & Public Transit (DRPT) and the Northern Virginia Transportation Authority (NVTA). There are six 100% electric buses on premise with eight more scheduled to arrive by late summer, including four 60-foot articulated or “bendy” buses. Equally impressive – the entire fleet is wheelchair accessible with almost all of the vehicles having a “low floor”; meaning there is just one step or a ramp to board the bus. Another important safety protocol is if a bus has been operated for 12 years or 500,000 miles, it’s at the end of its “useful life” and needs replacement. For that reason, almost the entire fleet is fairly new and in excellent driving condition. 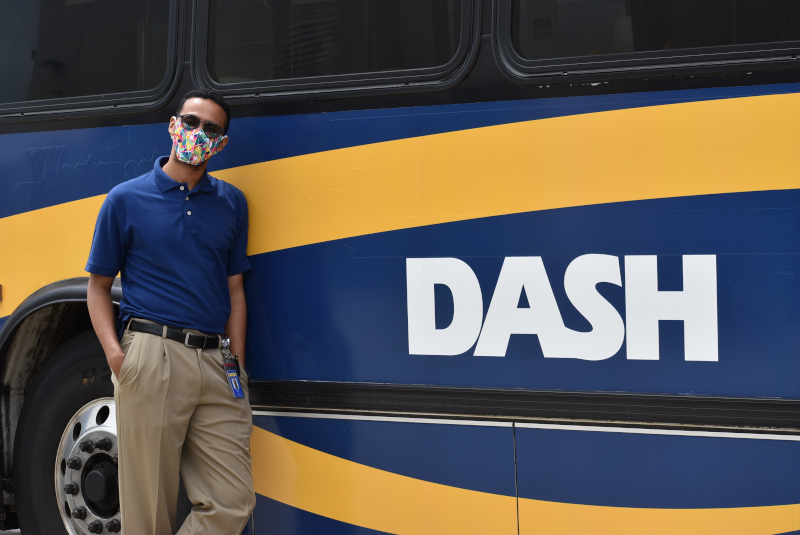 Helping to uphold this high standard is DASH’s inhouse maintenance team, which works out of a 147,000-square foot facility. Built in 2009, it’s where the team inspects, maintains, and repairs all its vehicles. The administrative department also operates from the building and there’s even a 90-bus indoor parking lot equipped with EV chargers for the electric buses. “We have six chargers already installed – two sets of three from different manufacturers,” Baker reports. “Right now, our electric buses are supplied by two different manufacturers: Proterra, an American-based manufacturer, and New Flyer, a Canadian headquartered company which builds their buses in the United States. Both partnered to supply us with the first set of chargers, with each charger capable of charging two buses simultaneously.”

The electric buses give detailed reports of bus performance, since battery charge greatly depends upon the driver. Baker adds, “The New Flyer buses, the first electric ones in our fleet, provide information reports from their own board telematics systems informing us of performance, charge state of the vehicle, how quickly the charge is lost, driving styles, etc. We’ve talked about incentivizing drivers for their driving performance, as energy is recaptured when coming to a stop, so the goal is to drive smoothly. That’s hard in an urban area, but if achieved, the battery charge lasts longer.”

As with the electric buses, DASH is often an early adopter of cutting-edge technology. It was one of the first transit companies in the area to create a mobile app on the moovel mobile ticketing platform for its customers. Martin Barna, Director of Planning & Scheduling, shares, “The DASH Bus app is used exclusively for the DASH transit system. Customers can use it to purchase their fare or monthly passes. They can pay online using credit cards, debit cards, or PayPal. It’s very easy to use. Whenever they’re ready to board the bus, they just have to activate their pass and show their screen to the driver. It’s been very popular.” Last fall, DASH’s regional partner, WMATA released the SmarTrip app. It allows Apple iPhone users, and now Android users, to pay Metrobus or Metrorail fare using the app, so the process is completely contactless. Conveniently, all DASH buses accept the SmarTrip app.

Alexandria Transit is also already using a technology called Transit Signal Prioritization (TSP). It’s a method used to help get buses through traffic congestion, a situation that is becoming more common throughout the transit industry. As Barna clarifies, “You can design the best service, have it running frequently into places people need to go, but then be caught up in traffic. Then your bus service is limited in its usefulness. There are several ways that buses can be prioritized over single occupant vehicles, such as bus-only lanes. Another lower-cost option is TSP, which requires special equipment to be installed on the bus as well as the traffic signal. The signal is then able to identify when a bus is approaching. It can adjust its green cycle to turn slightly earlier or extend a bit longer to help the bus get through traffic quicker. DASH is currently utilizing TSP technology from GTT Opticom at 24 intersections, thanks in part to a demonstration grant from DRPT. We’re collecting data on how frequently they’re being used and how much time is being saved.”

Being able to efficiently transport people is the heart and soul of the company. After three years of hard work, DASH will be launching its New DASH Network this September. Formerly known as the Alexandria Transit Vision Plan, it will be a brand-new bus network with new routes, new route numbers, new bus stops, etc. “It’s a broad effort by the city and DASH to completely reimagine our bus network in a way that is more representative of the community’s needs and priorities,” says Barna. “The New DASH Network will improve the overall mobility experience for our customers and allow us to do a better job of serving the city, especially the more vulnerable areas including low income and minority communities. The centerpiece of the new network is the frequent network. A series of bus routes, where service runs at least every 15 minutes or better, all day, seven days a week. If you’re at a bus stop that’s part of the frequent network, you’ll know a bus will be along shortly. It’s based on other frequent types of transit like rail. We’re putting that frequent, all-day service in more densely populated and lower income areas so they can be well-served by this new network.” 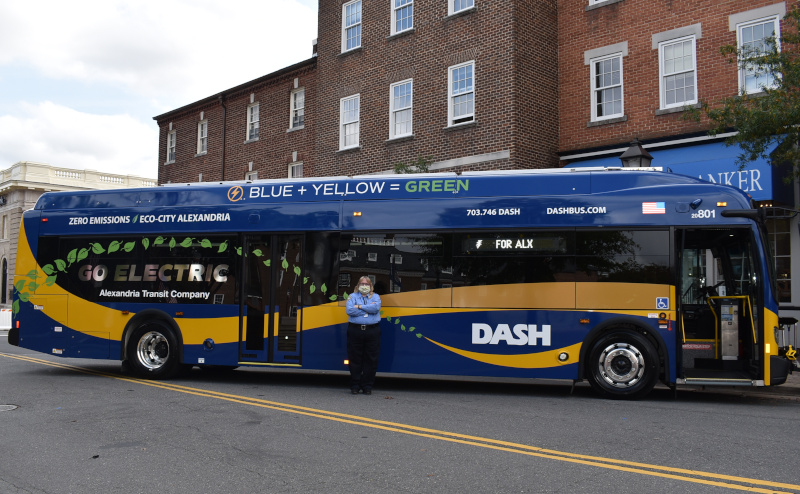 Also launching in September is a free fare policy for all DASH buses. Alexandria Transit will be the first transit system in both the Northern Virginia and Washington D.C. regions to do this. According to Baker, “This year the local city council voted to replace the revenue we would normally collect from our riders with local general fund dollars, allowing us to be fare free. We believe this will help with the region’s economic recovery post-COVID-19; particularly our disadvantaged populations.”

Barna agrees and maintains that with both the New DASH Network and the free fare initiative, the company is hoping for an increase in ridership. He notes, “We want to better benefit the community overall, not just for the transit riders, but everyone in the community. In terms of congestion mitigation, fewer environmental impacts, better climate outcomes, and a stronger economy – both locally and regionally – due to better job access.” Barna believes this is the outcome of thinking holistically about a bus network, determining its true purpose, and from there building a strong network that meets the actual needs of the entire community.

Looking ahead, Barna shares, “I’m hoping we’ll continue to build up our bus network; increase service, especially adding routes to our frequent network, so we can provide useful service to the community. I think we’ll just continue to look for ways we can improve, as well. To make the customer experience better, both in person and digitally.”

Baker echoes this sentiment, stating how excited he is about the future of transit, especially in Alexandria. “The future is a lot different than we thought it was going to be pre-pandemic,” he admits. “We are strategically rethinking about how we meet the needs of modern day-commuters. We want to continue to be a vital part of the solution, from climate change to traffic issues in urban and rural areas. Transit plays a key role in accessibility for individuals who do not have other means to get around. You see the administration investing significant money into infrastructure and transit. I hope to see transit continue to be discussed as a public infrastructure service rather than a profit-making organization. We should be building infrastructure to support the movement of our communities. That’s going to be the work we have ahead of us.”