Beverages inspired by a rich history

Alaska is an amazing place. An enclave bordered by Canada and Russia, it not only has the most northern point in the United States (Point Barrow), but also the largest geographical area – you could fit Texas, California, and Montana, combined, into Alaska. Its capital city, Juneau, covers more ground than Rhode Island and Delaware put together. On the other hand, Alaska has fewer people than any other state – being almost completely composed of the Rocky Mountains and tundra.

“When you look at the past,” says Geoff Larson, who along with his wife Marcy are the founders and owners of the Alaskan Brewing Company, “large national and international breweries were not the way things were done – brewing was much more local. Alaska has a huge history of beer making that goes back even before the Gold Rush, but that is when it took off. The gold fever created a stampede of prospectors, and mining communities like Juneau sprung up. At that time the mines were looking for anybody who had experience, and a lot of men came over from traditional mining areas in Europe. So the old world dominated the hiring practices of these mines and all of the transplants coming from Europe drank a lot of beer.” 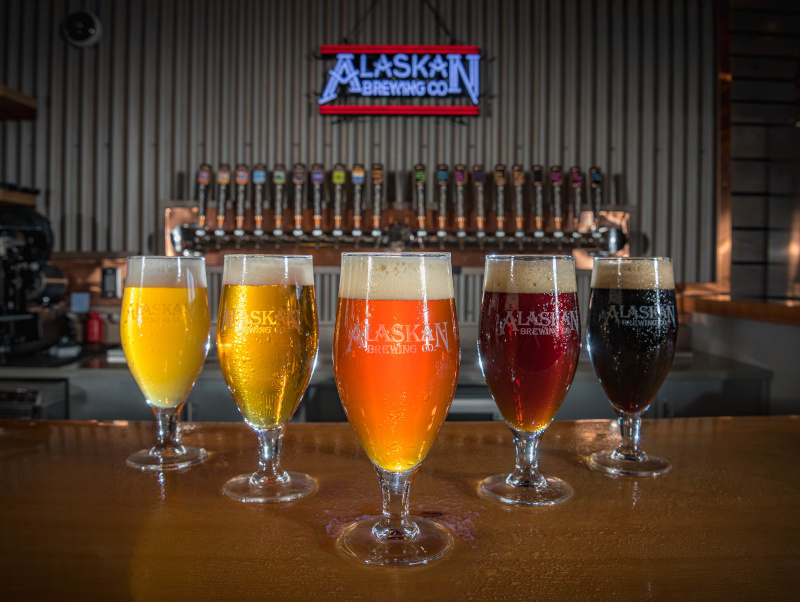 Before prohibition, there were over 40 breweries in Alaska. But when the Larsons started their company there were none and so they took a page from history. Geoff recalls, “We found an interview with an early brew master who talked about the brewing techniques and challenges of Alaska because of how cold it was. He said there was only one ale yeast that he could ferment at cold temperatures, which is a throwback to a style in central Germany called Alt (Altbier, or “old beer” from the Rhineland Region), and we basically replicated that historical recipe for our flagship beer Alaskan Amber. Back then that brewer was using what was called a Bohemian Hop, which has morphed into now being called Saaz Hops. He got it from the Austro-Hungarian Empire in 1907, just before World War I. So when we started, to match his innovative spirit, we went to the Czech Republic, basically the same place, and imported the same type of hops. We’re giving our customers a little bit of history in a bottle.”

Alaskan Brewing Company began in 1986, when the Larsons were in their mid-twenties and got the “harebrained idea” as they put it, to start a brewery in a place with no roads and no farms. Juneau is an interesting place, dependent on the outside world for grains and produce. Not surprisingly, the banks said no to a loan. The couple then started talking to friends and looking for potential investors, and even the ones who said they could not invest thought it was a great idea that they should run with. That’s just the way living in a frontier area like Alaska is – entrepreneurial but also a place where people take chances and see where it will go. After securing 88 investors, Marcy and Geoff returned to the bank with the capital they needed to begin. Right from the very start, they were determined to run the business differently and creatively, with both an employee stock ownership program and hiring practices that allow for input and ownership of the product.

“We are based on one city block,” explains Marcy, “and we usually have 130 employees (COVID forced us to lay off the nonproduction staff temporarily). We call everyone ‘the Brew Crew’. It doesn’t matter if you’re in accounting, or packaging, or if you’re in the lab, you are part of the Brew Crew. Our facility consists of a one-hundred-barrel brewhouse, a second 10-barrel brewhouse where we create our speciality beer, and then a little one-barrel brewhouse which is almost like a homebrew kind of an operation. That is a small-scale testing system where we invite our crew to join up with each other and create and concoct all kinds of wild and crazy beers. Then we take those beers and put them in the break room for employees to have, free of cost. It is a great test system because when free beer does not move in the break room of a brewery, we can be pretty confident it’s not going to sell anywhere else either.”

The Larsons go on to talk about how innovation at Alaskan has been driven by necessity – a historical reality in the state. Whether you are building a log cabin or a brewery, you are challenged by where you are. “We like to say that the way we brew is because of where we brew,” says Marcy. 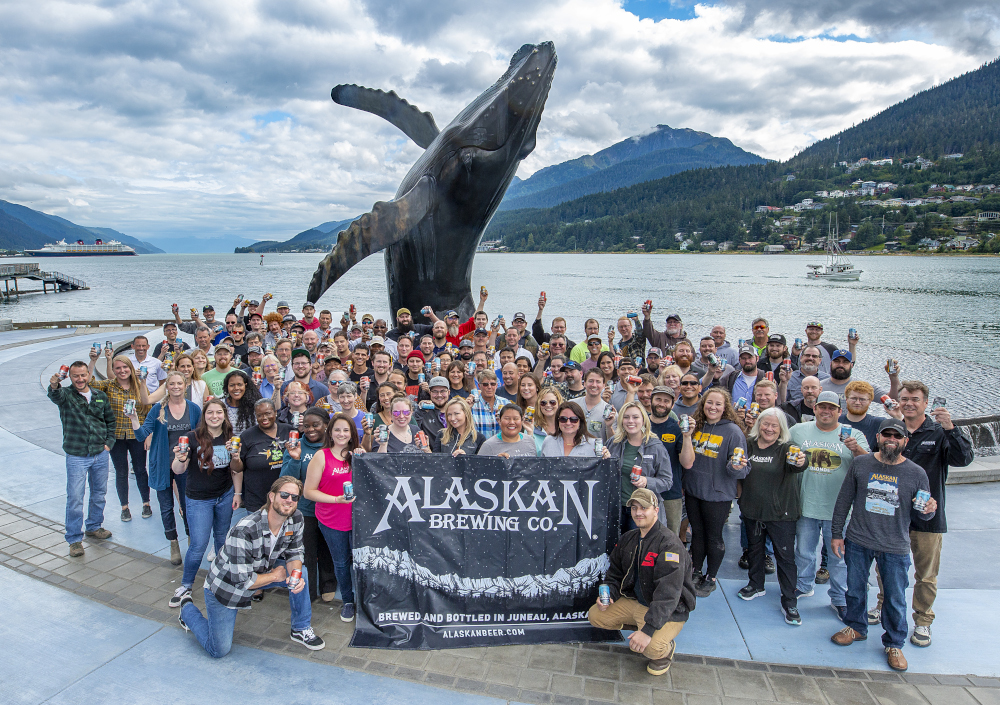 “Take, for example, CO2,” Geoff explains. “Not only does it give you carbonation in your beer, but we also use it to purge oxygen from the tanks and bottles, which would harm the beer. Now, CO2 is truly inexpensive, and most breweries just blow off the excess and think nothing of it. But they do not have to ship it to Alaska. We had to buy it in Seattle, ship it up the inside passage, and truck it to our facilities – it was neither economical nor environmentally friendly. We developed our system that captures the CO2 from the brewing process,  cleans it, and reuses it. We were the first craft brewery in the country to use this system. It also means that all of our CO2 is coming from photosynthesis rather than from the traditional method of capturing it by combusting fossil fuels… making us even greener.”

Another problem the Larsons encountered was shipping in all the grain, using a huge amount of water to process it, and then, so as not to overflow the landfill, shipping the used grain to farmers in the south. “This was a wasteful way to do it,” Geoff notes, “but we knew of a different technology, the Mash Filter Press, and we decided to try that out. Kind of like an espresso machine, it grinds the grain really fine and then presses  water through to extract the flavor. It’s a method that uses less water and grain than the standard steeping of grains in hot water and letting it drip through. It reduced our grain requirements by five percent but, more importantly, it reduced our water usage by millions of gallons per year. Taking it a step further, we adopted a way of using that spent grain as the fuel for our boilers, and reduced our dependence on fossil fuels by half.”

Innovation has been a core belief that has helped grow this company to the point where they now ship to the entire western half of the U.S., with hopes of broadening into Canada and rest of America. At the same time, they continue to explore new ideas, most recently introducing a line of Seltzers.

“Another story from history comes from the explorer Captain Cook,” says Geoff, “who had one of the healthiest ships on the water, partially because he brewed his own beer. He didn’t store hops or anything, so they would get off wherever they were and use local ingredients. One of the things he used as a replacement for hops was spruce tips – the new growth on the spruce trees that looks like candles. Well in Alaska, we already harvest Sitka Spruce tips which are used to flavor jams and jellies –  and we just went back to the example set by Captain Cook and used it as a flavoring for our seltzers. Again, it is history in a bottle.”

The company’s innovation can also be seen in their multi-award-winning Porter which took a nod from the fact that beer in ages past just incidentally had smoke flavoring because smoke was everywhere when wood was the only fuel. Their porter became the most award-winning beer at the Great American Beer Festival. Not only do they have a track record of getting it right, but the Alaskan Brewing Company continues to grow on the idea of bringing the past to life, while creating a perfect beer for the future. Cheers!

What: An innovative, award-winning brewery