Alabama League of Municipalities – The voice of municipal government

The voice of municipal government

The Alabama League of Municipalities (ALM) is focused on helping the cities and towns in the State of Alabama succeed in every aspect of governing, economic development, and positive community growth through education, legal guidance, and advocacy with federal and state officials. ALM is a nonpartisan association with about 450 members of incorporated cities and towns. Since it was formed in 1935, it has worked to strengthen municipal government through advocacy, training, and working to improve local leadership. Today, the League is the recognized voice of Alabama’s municipalities; helping to strengthen communities, as well as helping local leadership with issues faced by all municipalities.

Greg Cochran, Executive Director of ALM, explains, “We feel our communities are the foundation of our state’s economy. Creating communities where people want to live, work and play requires an environment where businesses and developers want to invest. That is the most important thing to us, locally, and to our state. So being a leader in driving that narrative is what we view as the most important mission we have here at the League. We do that through our advocacy, communication, education, and legal guidance. It is all focused intentionally with that mission in mind.” 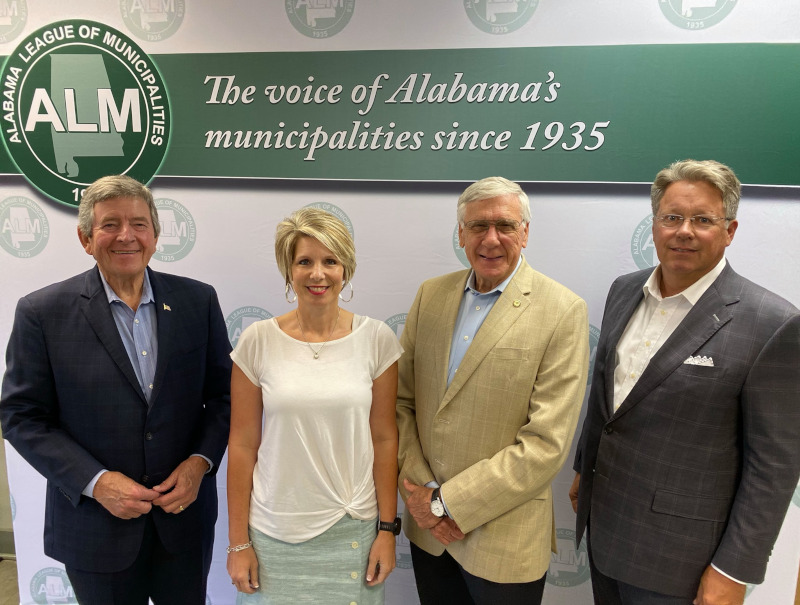 The League has well-established roots and has grown and evolved over many decades. In 1926, the Alabama Association of Mayors and City Commissioners was formed when close to 100 elected officials attended a meeting in Fairfield and elected Anniston’s Mayor Sidney J. Reaves as its first president. They charged members $5 and met annually at a hotel to talk about mutual challenges. That led the municipalities to want more. In 1935, with the help and advice of Governor Bibb Graves, who sympathized with the municipalities and their shared issues, an organization was formed that eventually became the modern-day Alabama League of Municipalities. The League has been active with its national counterpart, the National League of Cities, since ALM was founded.

Graves gave the fledgling organization office space on Goat Hill in the capital until they could afford to lease something else. He also helped the municipalities gain recognition in Alabama’s politics and recommended Ed E. Reid as Executive Director, a leader whose contributions defined the group for many decades. Reid had a background in journalism and government and was known for his charisma and seemingly unending energy. He even helped secure funding to pay his own salary. In 1937, Reid published a magazine that named the League’s current officers and explained “pressure groups” and their impact on legislative processes. It also explored the hidden costs of legislative proposals, and educated readers about fire insurance for municipal properties. His goal was to give members informed opinions, accurate information, and useful advice for governing towns and cities. Today, ALM continues to use its quarterly magazine, The Alabama Municipal Journal, to disseminate the same type of relevant, accurate information to its members. That publication is currently their most read communication, especially in times when members cannot meet face-to-face.

Over time, ALM has grown to 22 staff members that serve in various departments including: finance, legal, advocacy, communications, technology and member services. The League consolidated its financial services under Richard Buttenshaw; those services include the workers compensation pool, a bond pool program, and also a tax program to assist cities with being able to collect unpaid fees. Back in 1994, ALM started the Elected Officials Training Program for elected municipal officials. The voluntary program was the second in the country and gives elected officials an opportunity to continue educating themselves to become more informed about municipal processes. Once participants have obtained 40 credit hours of training, the elected official is presented with a designation of Certified Municipal Official (CMO). Several years after it began, due to the popularity of the program, an Advanced CMO Program was created. Those who receive both their CMO and Advanced CMO designations have the opportunity to obtain the Certified Municipal Official Emeritus designation. The CMO Emeritus designation was approved in 2015. The League also offers a variety of loss control and safety training through its insurance programs. 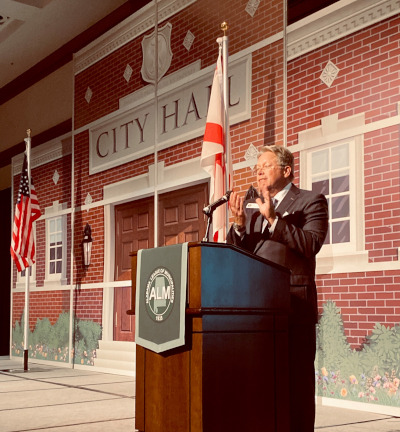 ALM is committed to helping members through the good times and more challenging times, including the COVID-19 pandemic that has become an economic obstacle for every municipality. In that regard, the League opened a COVID-19 Revenue Loss Portal to help guide municipalities through the process of applying to the state for funding and to take their concerns to state and federal officials in charge of these programs, as well as taking care of more pressing local issues. Cochran believes the economic challenges presented are affecting and confounding many. He notes, “So, what we are dealing with is how do our cities pull out of the economic picture that COVID-19 has imparted on us? To understand where we are and how we get back to where we were before the pandemic.  We think that’s going to be valuable and important to them, to understand there is a way out, but we have got to reimagine what that looks like.”

To help municipalities deal with facing the challenges of a post-COVID world, ALM recently partnered with some of Alabama’s top minds in economic development to host a conference geared toward elected local officials to define what role those officials play when it comes to the economic development of their municipalities and how to get a sense of what they can do in the current economic climate.

For 85 years, the League has served as the primary legislative advocate for Alabama’s municipalities, representing its members at the Alabama Legislature, in Congress, and with many agencies. Through those 85 years, the League’s legislative programs have influenced more than 400 general acts that directly benefit municipal governments and its community members. Cities and towns in Alabama receive millions of dollars every year in state-shared revenues as a direct result of the League’s legislative efforts. ALM staff continually monitor and report on all legislation, at both the state and federal levels that may affect municipalities. One of the ways it’s advocating for, and making, municipal leaders’ jobs easier is in response to the Rebuild Alabama Act, which was passed by the Legislature in 2019. ALM’s website serves as a host for municipalities to submit Rebuild Alabama projects for bids.

Cochran knows the future of the economy may not be the same, going forward. He shares, “Tourism and restaurants will not be the same for a while, and that was for us in Alabama what seemed to be our fastest growing business sector. Manufacturing is going to probably change a little bit in the way they operate. So, I think as we look ahead, we have to discuss what that looks like for our cities and towns.”

What: Non-partisan association for municipal governments