At home with nature

Life in Watercolour Westport is about reconnecting with nature as old friends. Where a front porch welcomes neighbors and pleasure comes in the form of an escape from urban living all the while staying connected. Over 20 years in the making, the concept for Watercolour Westport – a wellness community consisting of super-efficient “Net Zero Ready” homes inspired by Ontario heritage cottages – was born from the desire to build something enduring and impactful. Constructed by Land Ark Homes, an Ottawa-based firm co-owned by visionary home builder Stephen Rolston and his wife Diana, it expands on the company’s twin philosophies of connectivity through kinship and place-making in nature.

The scenic village of Westport where Watercolour is situated lies at the west end of Upper Rideau Lake, in the eastern part of Ontario and at the head of the navigable Rideau Canal system. Incorporated as an independent municipality in 1904, Westport has a long history (and some fascinating peculiarities) to share about how it came to be recognized as the nation’s premier and original cottage country. Sir John A. Macdonald, Canada’s first prime minister, used to take the train from Kingston, Ontario to Westport, back when Kingston was the capital of the “United Province” of Canada. The village is also part of the UNESCO-recognized Frontenac Arch Biosphere Reserve – one of only 18 biosphere reserves within the country due to its incredibly rich natural environment and heritage.

“Westport has been there for almost 200 years,” Rolston recounts. “A century ago, it was a thriving metropolis with nearly 2,000 residents. By the 1920s, there were six gas stations and the village served as the agricultural base for 17,000 more. Today, it’s a recreational summer community that’s in the process of becoming a four-season community; a highly desirable, walkable place where people can have their home and their cottage in one.”

“Watercolour Living”, as Rolston’s vision has come to be known, was created around the pedestrian-friendly tenets of Traditional Neighbourhood Design. Made famous by Andrés Duany and his architecture firm DPZ based out of Miami, Florida. The concept calls for residential neighborhoods to be designed in the format of small, early 20th century villages and was originally proposed as an alternative to the drabness of suburban sprawl. “The goal is to build homes that people will love,” Rolston offers. “As Winston Churchill said, we shape our buildings; thereafter they shape us. But more importantly, I think creating a sense of place and a walkable community that’s connected to nature and to neighbors is what we’re trying to do.” 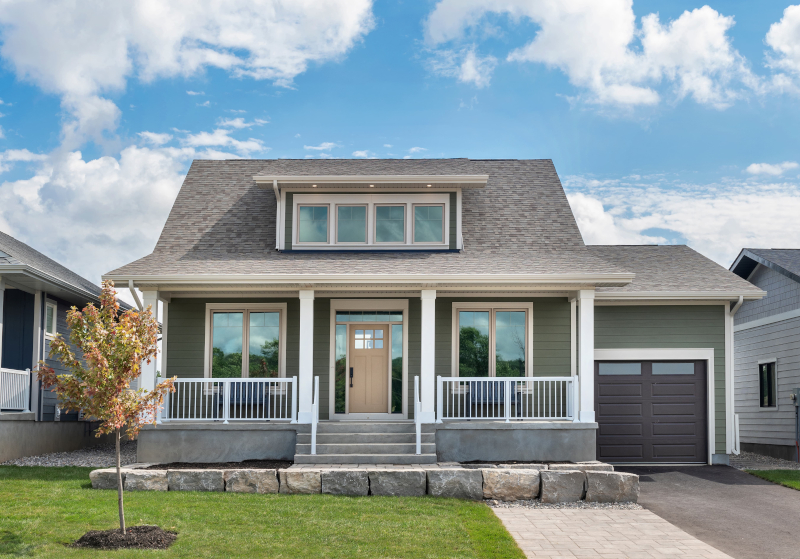 It’s location, a half-mile walk from the town centre of Westport and nestled at the base of the incredible Foley Mountain Conservation Area. Watercolour opens opportunities to explore the culture and biodiversity that are all part of village tradition. The town is home to a winery, brewing pub, bakery, an active arts guild, cafés, and more. A variety of summer camps and retreats are hosted at neighbouring day camps. Cities like Kingston, Ottawa, and Toronto are all easily accessible, and within driving distance that make Watercolour the perfect year-round gathering place. Adding fibre optic 1G service to every home allows those working from home to do so with ease.

Beyond the “downtown” limits, Westport is blessed with the surrounding 135 miles of shoreline on the Rideau Lake system and nature preserves. “We’re about half a mile from two wonderful bodies of water,” Rolston says. “Westport is actually the western port on the Rideau Canal, on the Upper Rideau Lake. The other lake is called Sand Lake and it’s rated the number one beach in Eastern Ontario. It’s only about 800 feet long, but it is raked and manicured daily by the Lions Club members and their paid summer staff. This is why, unlike the Sandbanks in Prince Edward County that seem to go on endlessly, this tiny little segment of a Sandbanks-like beach is absolutely glorious.”

Water is in abundance at Watercolour Westport, and so is color, according to Rolston. “I love the look of Newfoundland – brightly colored, beautiful homes that are unique and one-of-a-kind,” he says. “We wanted to recreate all the vibrancy that nature reveals.”

The crowning achievements around which the Watercolour lifestyle revolves are unequivocally the designer-finished, cottage-style homes that Rolston poured every inch of his creative soul into. Designed and built to meet Net Zero Ready standards, resulting in homes that are healthier and extremely high performing, each Watercolour property comes fully loaded with James Hardie™ board siding, a decorative veranda and porch columns, and premium vinyl triple pane windows that keep the home comfortable regardless of the season and enduring quality kitchens and baths.

“There’s so much that’s involved in creating a Net Zero Energy Ready home in terms of improving the air-source heat pump technology used in the heating and cooling of the home,” Rolston shares. “Air and water are two of the most efficient forms of heating and cooling, as are the triple pane windows – great for Canadian winters.”

Several model homes are built and available for occupancy by Christmas. Structural options are available to personalize the homes, but many of the best features are common to every model.  “We’ve built them all with nine-foot-high basements, with oversized four-foot high lower-level living room windows so that people can have as much natural light on the lower level as the upper,” Rolston says. “But the most recognizable thing about a Craftsman home is the front exterior living area that puts two great big outdoor areas on opposite sides of the door. Some of the homes have 8-foot by 30-foot front porches that are liveable, outdoor living rooms.”

Along with screened porches are mountain-side views that let even more of the outdoors in. “In some of the homes, you also have southern exposure on the backside, with a beautiful veranda,” Rolston continues. “In just the same way that no two cottages are the same, with our 12 different building plans, multiple front elevations, and 10 different exterior color palettes, my hope is that each home will be a custom-built, one-of-a-kind masterpiece.”

Craftsman-style homes are just as popular today as they were over 100 years ago. In stark contrast to the steeply pitched roofs and ornate gables characteristic of Victorian-era architecture, Craftsmans emphasize horizontal lines, with low-pitched roofs that extend far out past the home’s exterior walls. 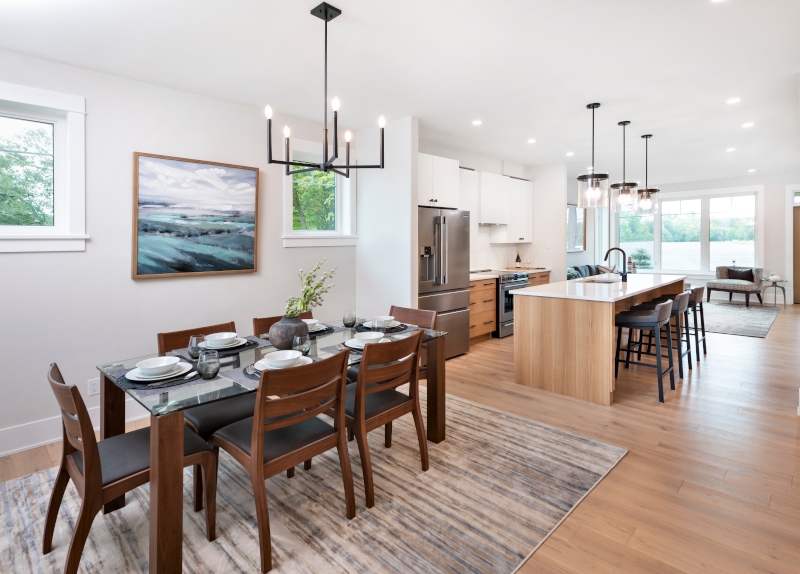 “The huge overhangs are standard,” confirms Rolston. “We’ve started with six bungalow plans that cater to those 50 plus. We also have four two-story homes that might be more attractive to younger families. In our next phase, we’ll have a townhouse block. Currently, our starting price point for those is $699,900. In future phases, we hope to have towns at $499,000, and semis priced at around $599,000.”

Land Ark has built the first 12 (one of each kind) homes as a point of reference for demonstration and advertising purposes. “What that means for the consumer is that we have immediate occupancies available,” Rolston explains. “The master plan calls for a build out over the next 20 to 30 years at 25 units of housing per year, but it’s one baby step of approval, one year at a time, in terms of investing in the infrastructure. Overall, there are 228 acres that we hope to build out, and we’re expecting to do that very slowly and methodically.”

Currently, the homes range in size on 50-foot by 100-foot lots, from 1,200 square feet to 2,500-square feet, with a combination of bungalows, bungalofts, and two-story homes all with 1G fibre optic internet connection. There are 10 homes in various phases of construction so far, and 50% of the designer finished quick occupancy homes are SOLD.

Rolston’s development team has put the extra effort in to define the vision and value for the project, with the aim of attracting buyers to fulfil the destiny and purpose of Watercolour Westport. “If we were selling just to investors from Toronto, we would have been sold out a long time ago,” he shares. “Our interest is to have an established community, with residents who live in the village year-round.”

“Steve’s wish list is extensive, he’s been a visionary on this project for so many years,” offers Wafa Martin, Marketing Advisor. “But coming out of a significant historical time with the pandemic, with all the lifestyle changes that people have adopted, what we hope for Watercolour Westport is that it can present that opportunity for buyers to find simplicity, to escape that urban density, and to land in a place where life can unfold with greater ease, comfort and, hopefully, meaning and purpose.”

Where: Village of Westport, Ontario in the heart of the Rideau Lakes region