Stockton, California, located in the Central Valley, is the county seat of San Joaquin County, and home to nearly 310,000 people. The city was founded by Captain Charles Maria Weber in 1849, and named after Robert F. Stockton, a United States Navy commodore, notable in the capture of California during the Mexican–American War. During the California Gold Rush, the San Joaquin River was navigable by ocean-going vessels, making Stockton a natural inland seaport and point of supply and departure for prospective gold-miners. From the mid-19th century onward, Stockton became the region’s transportation hub, dealing mainly with agricultural products. Its location at the head of a navigable channel, approximately 90 miles inland from San Francisco Bay, allows the city to continue to serve as a major shipping point for many of the agricultural and manufactured products of Northern California. 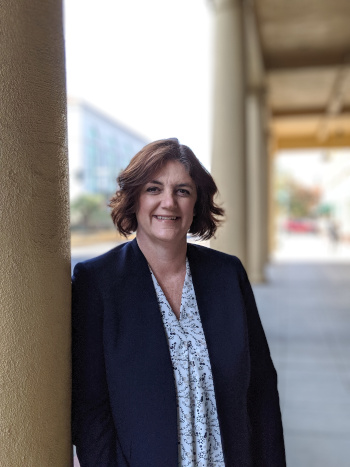 Rich peat soil and a temperate climate also make the area around Stockton, California one of the richest agricultural and dairy regions in California, and attributes to San Joaquin’s ranking of the sixth largest agricultural county in the United States. Throughout Stockton’s history, almost every major fruit, nut, and field crop has been grown in Stockton. Current major crops include blueberries, cherries, tomatoes, walnuts, and almonds, plus other smaller-production orchard, row and feed crops. Grapes amount to 40 percent of the fruit and nut harvest and contribute 18 percent to the county’s agricultural dollar.  Prize-winning wines are produced from vineyards north of Stockton, contributing to the international reputation of fine-quality California wines.

Today, Stockton’s central location, relative to both San Francisco and Sacramento, as well as its proximity to the state and interstate highway systems and its comparatively inexpensive land costs, has allowed the city to diversify its economy to include telecommunications, manufacturing, and healthcare. Its logistic position makes it ideal for swift and cost-effective distribution of goods to major West Coast, as well as worldwide, markets, and notably, Amazon, which has two distribution facilities in Stockton, California. The city’s transportation network includes a 35-foot-deep inland seaport, rail access, and the Stockton Metropolitan Airport, which serves commercial, corporate business, and general aviation needs of the community and features top-of-the-line air cargo capabilities. In addition, Stockton has a large, diversified workforce with an affordable wage structure, and an abundance of cultural, educational, and recreational opportunities for its residents.

“We have everything that it takes for a business to thrive,” says Carrie Wright, Stockton’s Director of Economic Development. “That can include a small business in the downtown core area to very large, commercial opportunities in our southeast section. Last year, we issued over 7,500 building permits with the biggest growth in our commercial sector. We’re perfectly positioned within the Central Valley, have an inlet port, a large, expanding airport, and a convergence of all major railways – right here in Stockton. Anything that needs to get moved can be moved from Stockton to anywhere in California, with access to major ports and destinations throughout the world.”

According to Wright, Stockton, California is in the midst of an unprecedented economic expansion and rejuvenation, much of which is focused on reviving its downtown. “One of the top priorities for the Stockton City Council is downtown revitalization,” she notes. And with the ongoing efforts of the public sector, downtown businesses, and private developers, millions have been invested in projects in the downtown area. Development of 1,000 residential rental units, locally-owned shops, restaurants, small businesses, office space, and green space are currently underway. With a unique supply of historic structures, access to the waterfront and connectivity to transportation, developers are rehabilitating Stockton’s historic spaces into multi-family residential and urban live/work units to support the growing downtown population.

“Stockton, California is very unique in that it has a lot of incredible, historic buildings in the downtown area, many of which are underutilized in terms of office space,” Wright explains. “We have several developers that have come in and re-habbed old buildings into studio and one-bedroom apartments and the waiting list for those are young professionals and entrepreneurs, who either work in the Bay Area and commute, or have a small business in the downtown Stockton area. We even have units that are work/live; so you can have a business on the ground floor and live in an apartment above. One young couple was living in the Bay Area, spending something like $4,000 on rent, plus they needed studio space for their furniture company. They started scouting where they could go, and they landed in Stockton. They’ve attracted their friends and their network of people to invest in the downtown area. That’s just one example of what I think will continue happening.” 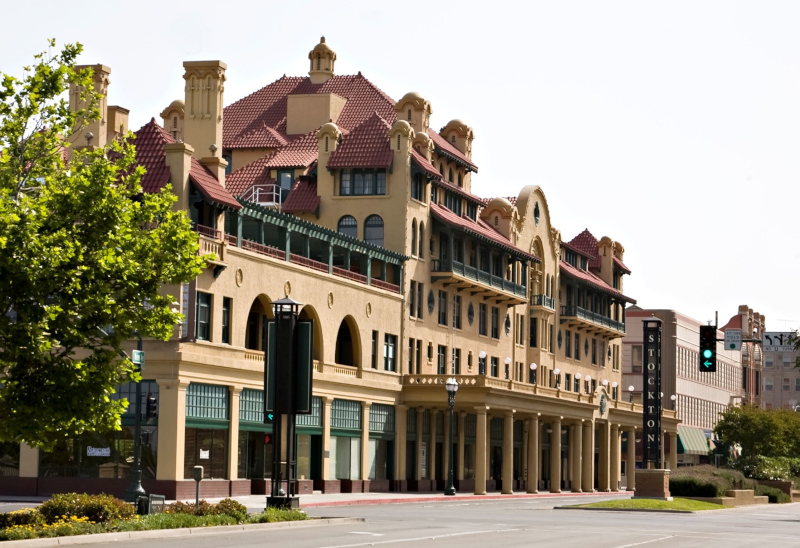 “We’ve waived some of our development impact fees for any building in the downtown area, and we currently have three market-rate housing projects that will come on line – all have waiting lists for people to move into,” Wright continues. “We also have a major grant that will transform one of our main thoroughfares making it walkable, with outdoor dining options, trees, and bicycle paths, and connecting to our ACE (Altamont Corridor Express) commuter rail and bus depot, which are also right in our downtown area. So, everything that you need to live in the downtown area either has happened or is in-progress. We need a little bit more market-rate housing to really tip us into the next wave, but we’re right behind Sacramento in terms of that investment, creating lots of vibrancy and opportunity.”

“On our city-owned property, we’re always looking for highest and best use and are willing to work with developers that have ideas that fit with our new General Plan,” Wright adds. “We’re really focused on infill development in this new plan, taking advantage of existing infrastructure instead of spreading out on the outer boundaries of the community. One of the things that’s exciting from a business prospective is that this new plan focuses on creating more possibilities for types of businesses in the different corridors, while making zoning a little easier. It’s less restrictive and at the same time, more thoughtful and strategic in how we’re driving traffic to the main commercial and retail corridors.”

The Port of Stockton is the third largest landholder port in California, has a Foreign Trade Zone designation, and a deep water channel that has an average depth of 35 feet. The Port operates a diversified transportation center on 2,100 acres, with berthing space for 15 vessels, including Panamax ships, and more than 1.1 million square feet of dockside transit sheds. There is an additional 7.7 million square feet of rail-served warehousing and more than 300 acres of developable land available for lease to serve commercial and industrial uses and cargoes. The Stockton Metropolitan Airport also has a Foreign Trade Zone designation as well as one of the longest runways in the region, making it the only non-hub airport in Northern California able to accommodate the entire fleet of wide-body aircrafts.

Stockton also has 19 designated Opportunity Zones, offering a variety of investment opportunities of all sizes. Each of Stockton’s OZs is leveraged by various unique characteristics, anchor institutions, and competitive advantages. Higher education institutions, the Stockton Metropolitan Airport, the Port of Stockton, the Burlington Northern/Santa Fe intermodal facility, historic neighborhoods, downtown waterfront, and local entrepreneurs that are located within Stockton’s opportunity zones, along with its growing industries, offer opportunities that are ripe for investment. “In my mind, Opportunity Zones are one incentive to invest in Stockton, but it’s not the only incentive,” Wright avers. “The state offers a lot of incentives, as well, so it’s one extra tool in the toolbox. We’re open and willing to work with anyone that comes in and wants to build something in an Opportunity Zone.”

Wright emphasizes that Stockton is a business-friendly city with a diversity of programs for small businesses. “If you’re a small business here, we offer things like code enforcement grants and small business loans,” she states. “We have a beautification façade program; we have something called Stock Full of Produce, which addresses our food deserts. We have a lot of corner markets that don’t currently offer fresh fruits and vegetables, so we’ve come up with a program to offer a grant that can be used to purchase the refrigeration units or make necessary infrastructure improvements needed to offer fresh fruits and vegetables and build a more healthy community.”

“If you’re considering a headquarter move, I think Stockton is the perfect location,” Wright adds. The city is committed to expediting all business projects and provides a one-stop-shop permitting, inspection, and plan review service that enhances customer experience and streamlines permit processing for all types of development. “Our goal is to say, ‘Yes. How can we make what you want to do work here in Stockton?’”

Finally, Stockton has a quality of life that makes it an ideal place to live, work, and play. “There are a lot of places that can’t offer its residents the lifestyle they’re looking for because of the cost of living in California,” Wright notes. “Stockton offers the affordability for those looking for that opportunity.” The city’s amenities include the Stockton Events Center, an entertainment project that includes a baseball stadium, waterfront, multi-use arena, hotel and conference center, retail space, and a seven-level parking structure. The 5,200-seat Stockton Ballpark at Banner Island is home to the Stockton Ports, a Class-A affiliate of the Oakland Athletics. The Stockton Arena is a state-of-the-art, 220,000-sq.-ft. facility hosting various conventions, concerts, and basketball games for the Stockton Kings. The city-owned and operated downtown waterfront marina has 48 covered slips and ample guest or day docks. Two regional parks within the City; over a dozen public and private golf courses in the region; a quaint county-owned zoo; a skateboard park; an indoor ice rink; and numerous other parks, baseball diamonds, soccer fields, bicycle paths, swimming pools, and tennis courts offer a variety of choices for outdoor recreation activities. Stockton recreation is also distinguished from other cities because of its prime access to the San Joaquin Delta consisting of 1,000 miles of waterways, fed by the Sacramento and San Joaquin rivers that stretches out to meet the San Francisco Bay. House boating, waterskiing, fishing, camping, rowing, sailing, wakeboarding, and charters are year-round past-times and a way of life to many city residents.

WHERE: On the San Joaquin River, in California’s Central Valley

Visit Stockton is responsible for the promotion and marketing of the city of Stockton.  Visit Stockton’s efforts are focused on driving additional tax revenue to the community through tourism to directly benefit the residents’ quality of life. Visit Stockton takes a community first approach and trusts that a city whose residents support tourism will also be a city that attracts business investment and develops a strong workforce.