The City of Slidell is a true gem of southeastern Louisiana. Only a 25-minute drive from New Orleans, it’s a diverse community full of antique shops, galleries, and restaurants serving up spicy boiled crawfish. Travelling to Slidell from inside or outside the state is a breeze since three Interstates, I-10, I-12, and I-59 all converge on Slidell. It’s also a quick commute to the National Aeronautics and Space Administration (NASA) Michoud Assembly Facility in New Orleans and the NASA Stennis’s Space Center in Mississippi.

Slidell was founded in 1882 during the construction of the New Orleans and Northeastern Railroad (N.O.N.E). But it was in the 1960s, when NASA opened its facilities, that Slidell’s population tripled over 10 years and the city became a major suburb of New Orleans. Today, Slidell is known for its nationally accredited Police and Fire Departments, partnered healthcare system, and a school system (St. Tammany Parish Public Schools) that is one of the top five in the state.

“If you look at our residents, they’re truly our biggest asset,” boasts Mayor Greg Cromer. “We’ve been living together and joining in marriage for generations. We genuinely have a warm, welcoming, and loving atmosphere within the community. Whenever one of us has a problem, whether it’s a fire, flood, or hurricane, we all pull together.” When Hurricane Katrina struck the southeastern United States in August 2005, Slidell was especially hard hit. “We started helping people pull up carpet, cut sheet rock out of their homes, and get themselves together. You’d see neighbors gathering families together to help tackle a home. At the end of a day, they had it gutted and were ready to start the rebuilding process. It was truly friends helping friends, families helping families. Neighbors showing the true spirit of our community; that’s what we’re all about here in Slidell.” 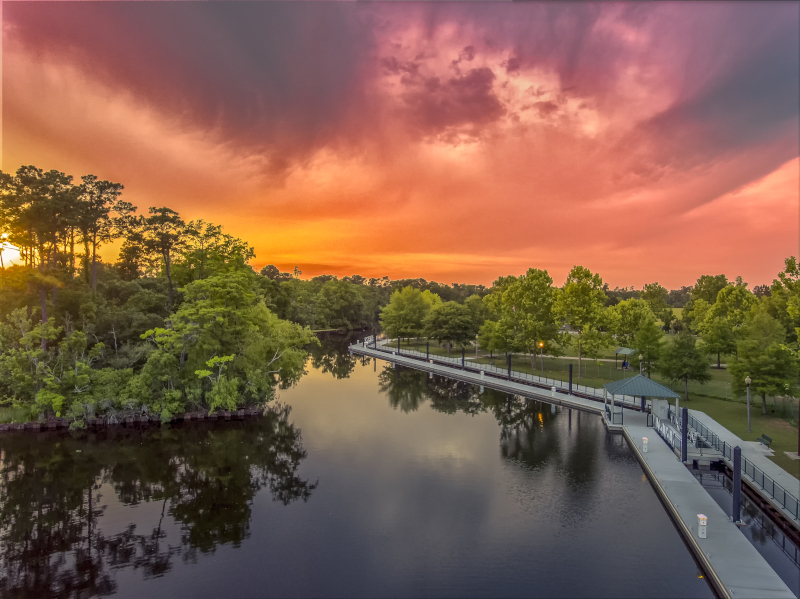 Today, the community spirit remains strong, along with the housing market. Over the past nine months, homes have sold both quickly and above asking price. The average turnaround is anywhere from two weeks to a month. “We’ve got inventory that accommodates the needs of the community right now,” Mayor Cromer reports. “We do have a couple of ongoing projects, including the 2,500-home development of Lakeshore Villages by D.R. Horton on the south side just outside city limits.” There are plans for other developments, but zoning changes need to be implemented to proceed.

A few months ago, Slidell City Council placed an 18-month moratorium on the construction of multifamily housing. “We truly have more apartment complexes than we need,” Mayor Cromer explains. “We consider multifamily as anything over a two-unit development; people can still put duplexes in for garden or patio style homes.” The hold is until the city completes its Slidell 2040 Comprehensive Plan, that will lead Slidell growth over the next 20 years.

The Comprehensive Plan also applies to the downtown core, known as Olde Towne Slidell. “It’s a neat area,” Mayor Cromer says. “We’ve got the Old Town Slidell Soda Shop, with an ice cream soda fountain and a putt-putt golf course is being added to the property. Recently an entrepreneur opened the Olde Towne Hatchet House, an axe throwing place. It’s an eclectic area. We’ve also got some artists who work out of their downtown homes.”

John Welborn, Chief Administrative Officer, agrees, adding how festive he finds Olde Towne. “There are block parties, or Olde Towne Crawls. There’s just a host of opportunities to get out, mingle, and have fun.” A great example is the popular Arts Evening Cultural Festival, as well as the Some Enchanted Evening with the Louisiana Philharmonic Orchestra event. Nearby Heritage Park hosts the free Bayou Jam Concerts and Slidell Movie Nights.

But Mayor Cromer wants to do more. He notes, “We work with St. Tammany Corporation, our local economic development agency. They offer Payment In Lieu of Taxes (PILOT) programs and Historic Tax Credits. They also foster development in Olde Towne Slidell. We’ve got some old storefronts which used the Historical Tax Credits to restore themselves to their original looks. But we haven’t tapped that enough. The mixed use is something we’ve been pushing for downtown, putting storefronts or restaurants in the bottom with residential upstairs.” The difficulty is many of the original homeowners have passed away leaving many heirs scattered across the country. Bringing them together to decide on redevelopment can be challenging. But the Mayor is determined “to encourage owners to do more.”

The availability of business property is key, as Slidell is in the midst of substantial economic growth. For instance, Amazon is constructing a 140,000-square-foot delivery station, opening in 2022. This will be a first for St. Tammany Parish and create hundreds of jobs. “We’re also getting up to three calls a week from companies wanting to establish logistics and distribution here because of Interstate traffic, but we don’t have the building stock,” Mayor Cromer admits. “We’re working with three investor groups to help build required building stock. So once completed, when we get a call, we can say, ‘Okay, we’ve got a 100,000-square foot warehouse with 40-foot ceilings. What do you need?’ We’re behind right now, but we’re trying to get ahead.” 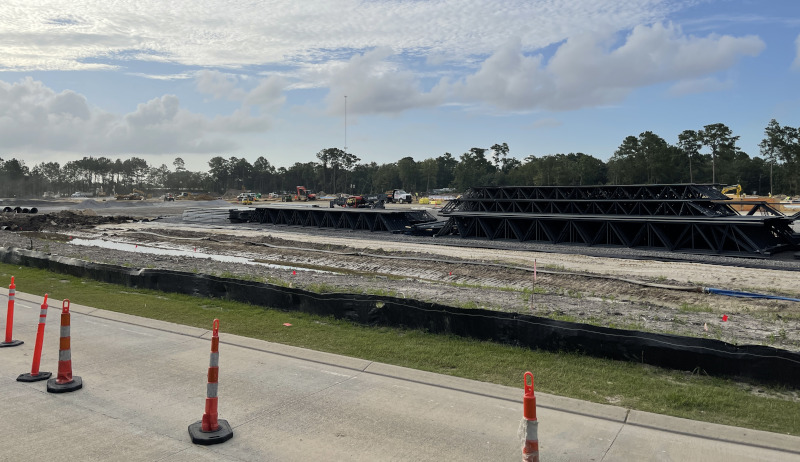 Within the last few months, Amazon started construction of a 140,000 square foot distribution center in Slidell.

Being proactive is key since Slidell’s proximity to St. Bernard Port Harbor & Terminal, Port of New Orleans, and Hancock County Port & Harbor makes it a desirable location. The city also has an Amtrak intercity train station, served daily by the Crescent train. In addition, the Slidell Municipal Airport (KASD) is adding about 1,000 feet to the runway to accommodate commercial and private jets and extra space will allow for a new fuel farm. The goal is to have KASD as the new fuel pitstop for jets heading to Central and South America on business.

Slidell is also installing a fiber ring around the entire city. Working alongside Camelia City Fiber, access points will be located throughout the community so students can safely use the internet availability. “We have some homes without Wi-Fi access, so we’re going to make sure it’s available,” says Mayor Cromer. “Kids can then access the internet, even if they can’t at home.” The fiber ring will also help strengthen the city’s technological infrastructure and hopefully draw more tech start-up companies to the area.

“These start-ups and small software shops do business with NASA’s facilities in New Orleans and Mississippi, but relocating to those areas is expensive,” says Mayor Cromer. “We’re hoping some of these companies will move to Slidell and get going at a more affordable rate. They’ll still be only 15 minutes from customers in the east and 30 minutes from customers in the south. We also have an older building called the Slidell Business Campus that was given to us from the federal government. We’re turning it into an incubator with a makerspace for these software shops to gain a foothold and get started. We’re working with Cox Communications and when the facility is up and running it’ll be a game changer.”

Other important improvements involve the community’s infrastructure. With Slidell’s geographic location, stormwater management is a constant concern. Currently, the city is working with local contractors to develop a new stormwater management plan. “We’ve also got a $10 million upgrade to our wastewater treatment facility,” states Welborn. “We’re building a new head wall that’ll increase capacity for water treatment and we’ll have new wastewater lift stations.” Mayor Cromer adds, “Water is just a way of life here. Being located on Lake Pontchartrain, with Pearl River and some bayous in the city, many people live on the water, earn their livelihoods on the water. Those of us who don’t, spend our free time in those water systems. We’ve got it all, fishing, hunting, and crabbing.” Welborn mentions there are also lots of water- and land-based recreation opportunities. Many of the larger parks have basketball and tennis courts as well as softball diamonds.

Looking ahead three years, Slidell will continue automating city departments, making it easier for residents to access help. Welborn would like to upgrade the internal system so requests can be tracked. He shares, “It’s my priority to finish the Tammany Trace Bike Trail, so the last three and a half miles extend into Heritage Park. I want citizens riding their bikes for 31 uninterrupted miles across the parish.” Mayor Cromer wants to see the fiber ring installed, the incubator full of start-ups, and the city working with Amazon. But his biggest intention involves the community. He emphasizes, “The perception others have of Slidell originates from us. How we perceive ourselves is how the rest of the world will perceive us. We’re changing that into a positive perception. Each day we come into this office; we’re changing the way we do business. We’re open to business, we welcome it, and we’re ready to go toe-to-toe with anybody in the world.”

What: A beautiful, business-oriented community; population 29,000

In June 2021, Louisiana-based GSA Consulting Engineers, Inc. joined McKim & Creed, a top engineering/surveying firm. Together, we plan, engineer and permit solutions to complex water, wastewater and flood challenges. Our Louisiana team provides these services, who has been part of the Baton Rouge community for 30+ years.