A welcome change of pace

The friendly town of Shelburne, Ontario is known for staying true to its small-town charm amid extensive change. Nestled at the crossroads of Highways 10 and 89 and County Road 124, the historically rural community is not the same neighborhood of mostly retired farmers it was 30 years ago. Its high median age population diversified over the past 10+ years, and now includes a younger demographic with about 9,000 residents.

Wade Mills, Mayor of Shelburne, reports that this “community in transition” is becoming the home of young families attracted to the small-town vibe and loyal to local businesses – providing a major advantage for Shelburne’s economy. He notes, “Our town motto is ‘a people place, a change of pace,’ and despite the growth we’ve seen, I think that in many respects, we still hold true to that motto.” 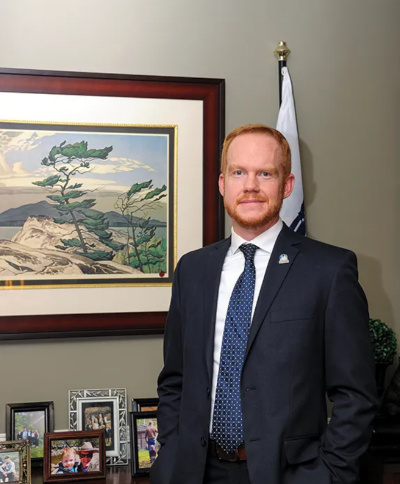 Shelburne’s economy takes pride in its mixed catalogue of local businesses, particularly those in the retail, service, and industrial sectors. Many brokerages, law offices, and doctor and health care professionals including dentist offices reside in this hub for Dufferin County and Grey County. Meanwhile, Dufferin’s largest employer, KTH Parts Industries – an auto parts manufacturer known for supplying parts to Honda in nearby Alliston – is based in the town. As far as franchise companies go, the town’s expansion is drawing larger businesses to the area. Shelburne is home to two very busy Tim Hortons locations – on Main Street and Colonel Philip Drive. A new Starbucks and McDonald’s will soon follow. As Mills explains, “This is big news in a still relatively small town like ours, but those are the sorts of things that, as the community grows, we need to have in place to support that growing and changing population.” Millions of cars also travel through Shelburne each year.

When the pandemic jeopardized the town’s small business sector, members of the Business Improvement Association (BIA) and the economic development committee banded together to form a small business working group. They drew up plans to support Shelburne’s mom and pop shops, organized online workshops, and relaxed many bylaw restrictions for restaurants to open patios without paying application fees for an extended period.

For added support, the council started an online platform that Mills calls “a virtual shopping mall” to keep business thriving during lockdowns, particularly in Shelburne’s downtown. Town council found that many business owners don’t have the expertise, money, or time to shift their business to e-commerce, leading it to provide more hands-on guidance. “We tried to spearhead that on their behalf and make it as easy as possible for them to tap into, so they have the benefits of a fairly robust e-commerce presence without having to do a lot of the legwork themselves,” says Mills.

These initiatives benefitted the community’s workforce, which has shifted over the past few years. Many people assume the town is mainly a bedroom community, yet while a lot of residents continue to commute outside of town for work, specifically to Orangeville, Alliston, the northern Greater Toronto Area, Brampton, Mississauga, and Toronto, a rising number are staying in town for employment. More professionals in neighboring Dufferin County and other areas north and west of town are also beginning to commute into Shelburne.

To build its workforce, Shelburne council got creative. The lack of post-secondary facilities in town posed a challenge, but the group began talks for work placement opportunities for high school students. However, that was placed on the backburner when COVID-19 reached Ontario. Steve Wever, Shelburne Town Planner and Senior Planner of GSP Group, explains, “Employers weren’t positioned to be bringing additional people into their facilities for training purposes during that period, but I think that will be something that will come back to greater focus when this is behind us.”

Extensive expansion to the residential sector is in progress, and the growing demand for housing isn’t letting up. Every time a new project opens up for sale, it sells fairly quickly. The largest housing development currently in progress, Fieldgate Homes’ Emerald Crossing, is situated next to Tim Hortons Plaza on the northeast corner of Highway 89 and County Road 124. Residents can soon relocate to the property’s 257 single detached and townhouse units, and a future block of medium-density homes, and enjoy a large commercial development within it on the east side. 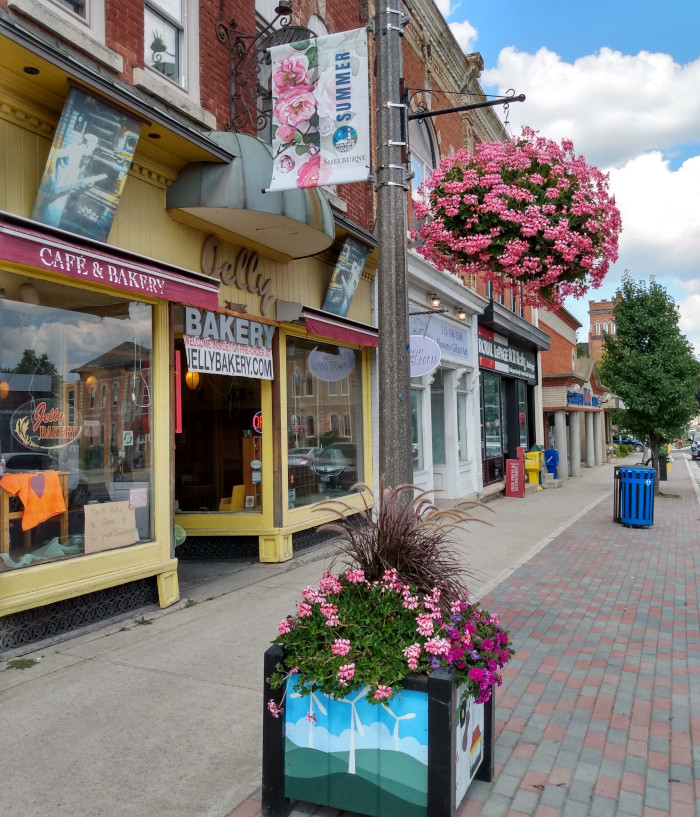 The west side of town will welcome two new residential developments. The Tribute Communities subdivision adds 245 units many of which are now built and occupied and the remainder under construction, and two new subdivisions are proposed nearby with 200-300 units on the north and south sides of Highway 89. Meanwhile, Flato Developments applied to construct a 93-unit senior citizen apartment building on the north side of Highway 89 and plans to develop several hundred units on another 100 acres. Maramel Homes’ small Shelburne Towns development is under construction nearby at the west end of First and Second Avenues.

Updating the community’s infrastructure has been a priority as the population numbers keep increasing. The six-square-kilometer town will build on the remaining land in Shelburne’s urban boundary. The next phases of this growth are planned over the next 10-20 years, as part of the Town’s Official Plan updated in 2017. The expansion will be part of Dufferin County’s own land needs assessment for growth in its 30-year plan. “What we anticipate is that the remaining land within Shelburne’s municipal boundary, all of the west side land in particular, will be needed for Shelburne’s growth locally to feed into the county’s needs,” says Wever.

Next on tap is tackling the capacity of Shelburne’s water treatment plant and lack of access to a major waterway. Currently, the town must rely on the Nottawasaga Valley watershed to remove wastewater. However, the town’s sustainability efforts, including establishing town-wide water metering requirements and reviewing rates and charges on this regularly, has allowed them to reduce water demand. The town has also replaced old sewer pipes in wet areas and introduced special drainage measures to avoid infiltration and inflow into the sanitary network. Several other studies and initiatives are underway, including a redesign of the wastewater plant to prepare for an upgrade to sustain population growth in the next 20 years. The town will also add a second water tower in the south end to alleviate water shortage issues and meet fire flow requirements and upgrade its well that is based four kilometers west of town in Melanchthon.

The council is also focusing on revamping roadways. As part of the town’s Transportation Master Plan starting this year, the council is investing in making roadways easy to share among cyclists, pedestrians, and cars. Improving trucking routes, bypasses, and development accesses is also on the agenda. In particular, the town plans to reroute the heavy truck traffic downtown using the provincial highway corridor. This flow of traffic change will happen alongside the revitalization of Shelburne’s mixed-use downtown. The town’s Official Plan and Community Improvement Plan intend to redevelop the locale and enhance its amenities.

In line with its Parks and Recreation Master Plan, now underway, town council will open new parks and determine what facilities each of them will have. This includes a re-evaluation of the popular Fiddle Park. The park, known for holding Shelburne’s nationally renowned Heritage Music Festival (previously the Canadian Open Old Time Fiddle Championship), is slated to become a community-oriented park rather than just a tourist destination and event space.

The final infrastructure enhancement is the expansion of high-speed internet and telecommunication service for townspeople working from home and local businesses. Parts of Shelburne will receive fibre optic lines through the SWIFT (Southwestern Integrated Fibre Technology) program. Also, to improve local broadband wireless services, the council recently approved a proposal for a new telecommunication tower.

Shelburne’s path to expansion and progress is set to continue, as it aims to accommodate a growing population and develop “a complete community.” The town is on track to bring in a balance of amenities, services, arts, culture, and facilities now that the residential side is growing. As Wever shares, “While there is some catching up to do, the town has several opportunities to achieve this goal. There’s a great opportunity within the next 10-20 years of growth to balance off all that population increase with the additional amenities and services that will be needed. Not only to service that, but also to realize the benefit for the residents who are seeing all this growth in their community.”

What: A vibrant rural community with small town charm; population 9,000

Launched in 2005, FLATO Developments has introduced a new and refreshing spirit to community building across southern Ontario. FLATOhas quickly established a reputation for paying meticulous attention to the finest details, whether it be how to seamlesslyintegrate a new neighbourhood into the existing community fabric, to offering distinctive architecture and design flourishes, and going above and beyond to ensure 100-per-cent customer satisfaction. It’s an impressive reputation, and one the company strives to exceed with every new community-building initiative.

FLATO’s intention is to provide a diversity of housing options that will supply the community with opportunity to find the home of their dreams, with housing choices for all generations, whether it is seniors, multi-residential or young families, building a community means supporting and providing housing options for all.

Proudly located in Shelburne, Ontario, Ice River Sustainable Solutions is the first beverage company in North America to operate a recycling facility in a closed loop. From curbside collection, to recycled bottle manufacturing, to fresh natural spring water products and back again – our facility recycles roughly 55 million pounds of plastic per year.