San Luis Valley Regional Airport – Nothing but sunny days ahead

Nothing but sunny days ahead

Anyone who has read a western novel, or seen a western movie, has heard of the Rio Grande. This beautiful, iconic river snakes through the desert landscape from Colorado through New Mexico and Texas on its 1800-mile journey into Chihuahua and the Gulf of Mexico. It is one of the most important rivers of the southwest and one of the most beautiful places it flows through is the San Luis Valley, where the headwaters of the river, flowing off the San Juan mountains, are flanked by the Sangre de Cristo Mountains.

It is there that you will find the growing community of Alamosa, Colorado, originally a railroad town where the Rio Grande Railway met up with the Denver Railroad. These days it is also home to the Great Sand Dunes National Park and Preserve and a bustling agriculture and tourism industry. Just south of town you will also find the San Luis Valley Regional Airport (ALS) – which has seen growth year over year for the last while and is re-inventing itself in big ways.

“The San Luis Valley is a pretty cool place to live,” says Will Hickman, Manager of San Luis Valley Regional Airport. “I have been here a little over three years and I have fallen in love with it. We have sunlight for 95 percent of the year, which helps make us one of the top agricultural spots for the country – particularly when it comes to potatoes, barley, and wheat. The San Luis Valley grows most, if not all of the barley for Coors Brewing here. Potatoes are our largest crop, and cattle and sheep ranching are also big ag industries here. But from an airport point of view, our largest client is tourism.”

In November of 2020, after a bidding competition, SkyWest Airlines, doing business through United Express Airlines, started flying daily service to Denver. By attracting a major carrier, the San Luis Valley Regional Airport became reclassified as a Class 1 Commercial Service Airport, also known as a Primary Commercial Service Airport. “This was a big deal for us,” says Hickman, “We also became Part 139 certificated through the FAA and now we have larger, 50-seater, regional jet service. SkyWest flies to Denver International twelve times a week and from there you can connect to any other location in the country, as well as international destinations.”

Despite the trials and tribulations of the pandemic, the airport has seen a lot of infrastructure work leading up to these service changes. Taxiway Alpha was recently fully reconstructed, which is the parallel taxiway along the entire 8521-foot length of the runway. It is 35 feet wide and can accommodate a large variety of aircraft. This was a $7 million project fully funded by an FAA supplemental appropriations grant and included new LED taxiway lighting as well as LED airfield signage. They have also constructed a complete wildlife perimeter security fence; eight miles of fencing protecting over 1700 acres of land, which helps prohibit the incursion of animals such as deer and elk, both of which have been a problem in the past. In addition, the fence creates a safety zone for humans around the airport.

San Luis Valley Regional is also in the process of replacing its aging fuel farm. Construction will be completed soon and will provide the airport with a 12,000-gallon Jet A fuel tank, as well as a 12,000-gallon AvGas tank. This is a significant improvement over their previous capacity and is just one more step along the way to increased operations.

“Our hangars are also 100% filled right now,” Hickman reports. “We have approximately 36 hangars on the field and having them filled is a good problem to have, but still, we need to increase our capacity. We are in the middle of creating a new Master Plan for the airport which should give us plans for the next 20 years of development. We have some exciting things coming up which will maximize the airport fully for general aviation, commercial aviation, and other users. The plan will include usage ideas for our undeveloped land as well. There is a good portion, especially on the west side which could be made available for both aeronautical and non-aeronautical use.” 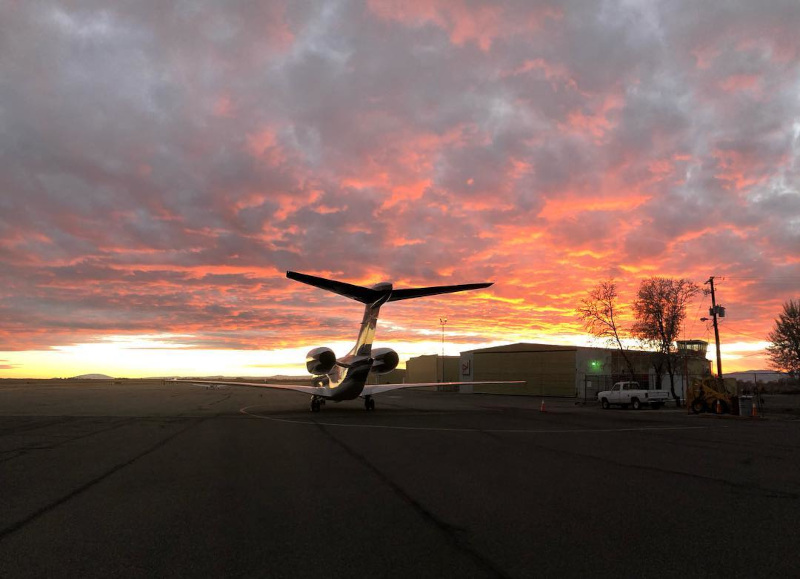 The aircraft fuel servicing and general aviation service aspect of the airport is managed by the airport FBO, Centric Aviation. They have recently updated their fuel truck fleet and offer a full assortment of pilot services and aircraft maintenance. Other users of the airport include Alpine Air and Key Lime Air that provide cargo flights, and Eagle Air Med operates air medical flights as a subsidiary of Guardian Flight using their fixed wing King Air C90. San Luis Valley (SLV) Health also uses the airport as a refuelling and maintenance depot for their hospital-based helicopter.

“We try to promote the airport and the aviation industry in general whenever we can,” says Hickman, “and so for the past couple of years, we have done work with the local schools – everything from daycare through elementary and middle schools – to offer tours of the facility. It is a lot of fun for everyone. We usually bring out some of the equipment. Eagle Air often brings out a pilot and one of their aircraft and the kids get to climb up inside the plane and ask questions. We also run them through all of the security and TSA checkpoints, which the kids seem to get a kick out of. Our FBO, Centric Aviation, gets involved as well and we show the visitors a really fun time. We want to continue to do things like that and expand our outreach into the community as we continue to grow.”

So, what is next for San Luis Valley Regional Airport? The completion of the Master Plan will help to determine that, but possibilities include looking at solar power – they do have almost daily sunshine after all – and expansion of the parking facilities. The infrastructure needs to advance along with the usage, but they are well on their way to continued growth.

“It has been tricky during COVID, but we are seeing the other side of that now,” Hickman admits, “and there is still a lot of possibility for growth here. We are seeing that in the town as well. This is an exciting time to be involved in the airport and I cannot wait to see where it goes from here.”

What: A primary commercial service and general aviation airport