Business View Magazine interviews Marissa Sanchez, Assistant Director Department of Aviation for the City of Dallas, for our profile of Dallas Love Fiel

What will the future of air travel look like? We have been asking that question since the Wright Brothers and in truth, the answer is always evolving. When it comes to large-scale airport operations, therefore, there is always a sense of asking, what’s next? Bigger planes, faster planes, personal planes, vertical takeoff, electric… the sky’s the limit. And keeping ahead of the curve is the ticket.

At Dallas Love Field (DAL), the 31st busiest airport in the country, they are serious about keeping this forward momentum, and there always seems to be something in the works. It was once the only airport for Dallas, and has been the second-largest airport in the city ever since the construction of DallasFort Worth International Airport in 1974. Before COVID-19 came on the scene, the airport saw nearly 17 million passengers. When you are talking about this much business, there is always going to be more that needs to be done. 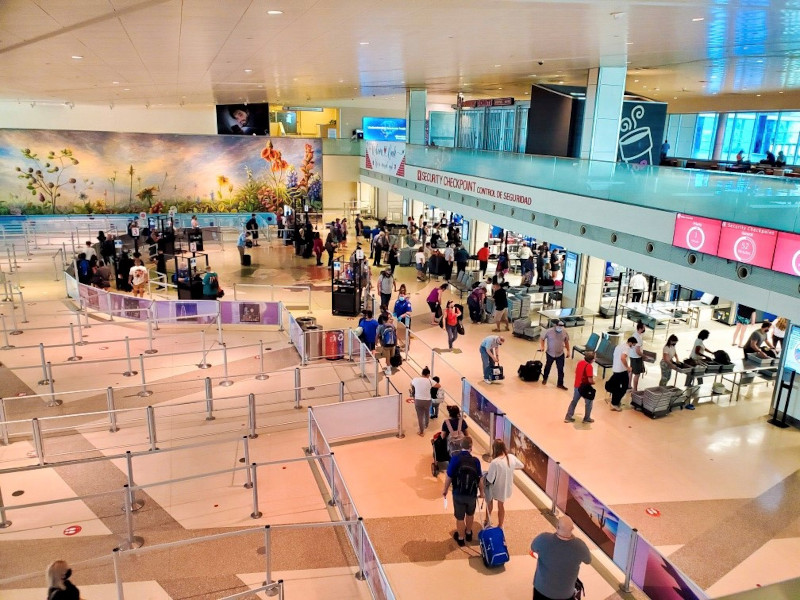 “Our runway project is certainly the most significant project at the moment,” explains Marissa Sanchez, Assistant Director of the Department of Aviation for the City of Dallas. “It kicked off in April of 2021 and we had originally estimated that the runway would be closed for 10 months. Because of a few different challenges, including labor shortages and supply chain issues due to COVID, we now see the runway being closed longer than originally anticipated. We are closely working with our contractor, Flatiron Constructors, to strategize about different ways that we can perhaps try to regain some time. So, they are looking at moving up some activities that were going to come in later phases, to see if they can tackle some of those things earlier in the project.”

This is a huge, $141 million project to demolish and rebuild runway 13R/31L, which was last repaved in 1990 using concrete designed to last 20 years at lighter Wright Amendment traffic levels. The project, originally scheduled to be completed in February 2022, temporarily leaves Love Field with only a single usable runway – although Sanchez also hopes that they will be able to work with contractors and airport staff to minimize disruption and continue operations.

Dallas Love Field is a very busy enterprise, incorporating 1300 acres with two runways and 20 gates. There are also 40 hangars for general aviation. They have maintenance facilities, as well as eight Fixed Base Operators, who each handle a slightly different need based on traffic. In total, DAL accounts for some 11,000 jobs in the region. In terms of commercial aviation, it is well served by Southwest, Alaska Airlines, and Delta. There is also a new hop-on service provided by JSX.

“We’re excited to be kicking off new crossfield taxiway construction, as well as adding new de-icing areas,” Sanchez reports. “That project is currently out for bid, and we are estimating that construction will start in August. We are also beginning work on our parking garages. We have three and two of them are over 20 years old. We have been looking at roof repairs, and some areas previously affected when there was flooding at the airport. We are also doing an assessment of the elevators in the parking garages. This will be a multi-phased project that will soon be looking to start phase two and doing some elevator enhancements and replacing some of the equipment and motors. We were also awarded a grant to install 10 electric vehicle chargers, in addition to the ones we already have, and we’re going to look at a plan to identify the best areas to put those. In addition, we have a Request for Proposal (RFP) to design the replacement for our ARFF station that will be going out for solicitation in March.”

As is the case with most commercial airports, the COVID pandemic really hit hard, but Sanchez thinks that Dallas Love Field has had a fast and furious comeback. “We are fortunate to be the hub for Southwest,” she says. “Southwest began its business at Love Field and was the main airline to maintain its full business from Love Field when DFW International opened. They have been very proactive in terms of competitive pricing and trying to pave the way for a recovery. Because of that, we have really bounced back, and our numbers are at 92% of the 2019 numbers. Business traffic is starting to pass the 2019 numbers. There have been some challenges with the rapid recovery, such as concessions in the airport that are seeing challenges in the labor market.  We have tried to assist our concessions vendors by hosting job fairs and posting opportunities.  We are trying to be of whatever assistance we can be to see those numbers gaining speed.” 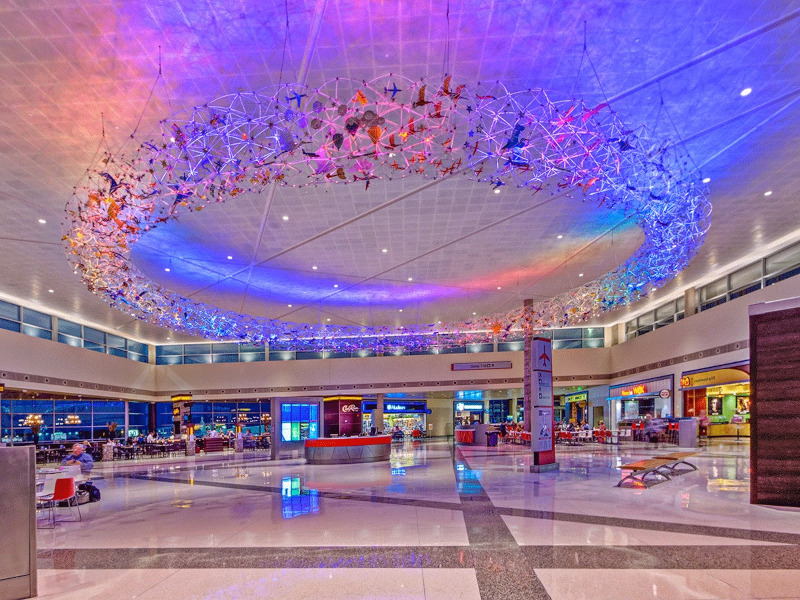 The terminal was renovated nearly 10 years ago, but is now in need of some upgrades. There have been a few issues noted, such as a lack of washroom facilities, but because the airport is relatively landlocked, the building cannot really be expanded. Because of that, it is all about modifications and modernization. For example, there were modifications to the HVAC and air systems, as well as other small changes all aimed at making the traveler feel comfortable and safe while flying during the pandemic. We will continue to assess our facility to determine what other changes or enhancements can be made to increase passenger satisfaction, energy efficiency and optimal travel experiences.

“The exciting thing with Aviation is things are always changing,” Sanchez points out, “for instance, Dallas also has a Vertiport downtown which is an extension of the airport and has five pads for helicopter use. Although it doesn’t have any fueling yet we are looking at potentially bringing that on or charging for electric vehicles. It is very exciting. The current Vertiport is currently located on the top of a parking garage for the Kay Bailey Hutchison Convention Center but and there is also a discussion about moving to a different location and continuing to develop that further. We have so many different things going on right now that will have a lasting impact on Dallas and the region for years to come. The Department of Aviation is very fortunate to have a team of staff that is made up of new people along with those that have been around for some time – it makes planning and organizing easier with so much experience.”

When contemplating the future of aviation and Dallas Love Field in particular, Sanchez points out that they are beginning to have discussions about advanced air mobility. She notes, “We aren’t anywhere near the Jetsons, but there will be more and more air transport as technology becomes more affordable and readily available to consumers. The thing is that we have to be forward thinking about this because it is happening sooner rather than later. The future infrastructure needs have to be considered when we planning our facilities. The sort of footprint we have in Dallas is going to be critical in terms of attracting business to our area. This means adapting various landside technologies in advance of advanced air mobility. Being on the team that is planning for the future to make it happen is truly exciting!”

Four Leaf Ventures was founded in 2006, based in Irving, TX, with a passion for developing world-class restaurants and quality employees, with a focus on making the customer experience first-rate.

Our leadership team has over 100 years combined of multi-unit restaurant operational and developmental experience.

Ownership was built from managing a single restaurant, on the ground learning the basics, to now owning more than 10 restaurants, and growing. That is true hands-on training and a ‘working your way up the ladder’ mindset.

We are all about growing great leaders. We know how important employment growth is.

PGAL, Inc. is an S-Corporation privately held by numerous principals and senior staff, with headquarters in Houston, Texas and 12 strategic locations across the US. PGAL’s team of aviation specialists understand the challenges that face airports and airlines to enhance customer service while facilitating secure and efficient operations.

Hudson is a travel experience company turning the world of travel into a world of opportunity by being the Traveler’s Best Friend in more than 1,000 travel convenience, specialty, food & beverage, and duty free stores in airport, commuter hub, landmark, and tourist locations in North America. To learn more, please visit us at hudsongroup.com or follow our journey on LinkedIn and Instagram.

As a mobility and economic hub to one of the largest metropolitan areas in the country, Dallas Love Field is an industry leader in operations, management and customer satisfaction. HNTB is committed to delivering projects critical to the airport’s long-term growth and success.

M S Benbow & Associates (MSB) is a team of consulting engineers who specialize in wireless connectivity for major airports, public venues, and large-scale facilities. We work together with our clients to assess, plan, design, and build robust, state-of-the-art wireless networks and thrive on solving complex engineering challenges!