Situated in the midst of one of the best kept secrets in the U.S. – the Ouachita Mountains – the City of Mena, Arkansas is surrounded by natural beauty on all sides. The mountain range runs from east to west and the city is centrally located in the country, with convenient proximity to various metro hubs. Mena is also the county seat of Polk County.

Originally, MEZ evolved from a number of smaller airfields, but in 1948 the Civil Aviation Commission (now the FAA) established the airport. While in the past it had grass landing strips of around 3,000 feet, the airport now boasts two asphalt runways. Runway 17/35 runs north to south and is 5,000 by 75 feet, while Runway 9/27 runs east to west and is 5,500 by 100 feet. Runways 9/27 is equipped with an Instrument Landing System. Runway 17/35 offers an RNAV (GPS) approach. Both runways are served by full-length parallel taxiways.

MEZ has close to 20 different businesses on the airfield that offer multiple services including: aircraft painting, airframe repair, a Certified engine repair station, and avionics work. These businesses relocated to Mena Intermountain Municipal Airport because a mixture of ex-military professionals and civilians had a desire to work on planes. As Ogden elaborates, “In the 1960s an individual started a business that would fix up and sell older airplanes. Others joined in applying the skills they’d learned in the military, onsite and elsewhere. Since then, it’s just carried on.”

The airport management has developed and maintained close relationships with all the businesses on the field. One such enterprise is Rose Aircraft Services. One of the larger businesses onsite, they specialize in interior and exterior refurbishments, as well as maintenance on a large selection of aircraft. Ogden recalls, “Rose Aircraft Services are often called in to repaint aircraft for movies and celebrities. They did the Golden Knight airplane and the army jump team. I went to high school with (owners) Keith and Brenda, they’re both fantastic. So is their brother Kent, proprietor of Rose-Wood Aviation.” 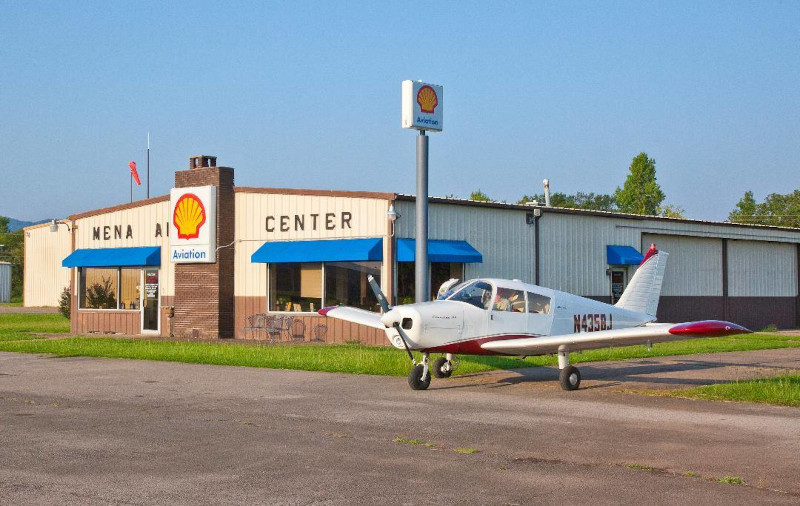 The community of Mena and the local area has a firm interest in aviation, as it is a big earner for the city and Polk County. According to a study commissioned by the Arkansas Department of Aeronautics, during 2016-2017 the businesses at the airport generated an estimated $30 million a year for the local economy, and that businesses at the airfield employed around 250 people. “We’re a big cog in the wheel in terms of the local economy,” Ogden confirms. “While MEZ isn’t home to many aircraft, it is the number of planes that fly in and are worked on that compels the FFA to keep the airport funded.”

Owned by the city of Mena and overseen by the Mena Airport Commission, the airport has a privately owned Fixed Base Operator (FBO) called Mena Air Center, which supplies Jet A fuel and 100LL Avgas. They also operate a number of hangars on the field. As is the national trend across the country, however, at times the airport doesn’t have enough hangars to meet demand. While Ogden says they have room to build on its 1,079 acres, although 5 new hangars have been constructed in the last 5-6 years, there’s no one willing to take the big investment plunge as yet and relocate a large RMO to the field.

The City of Mena is home to the University of Arkansas Rich Mountain Community College, which conducts classes in one of the hangars. A number of businesses located at the MEZ are interested in participating with employment opportunity programs, such as apprenticeships. 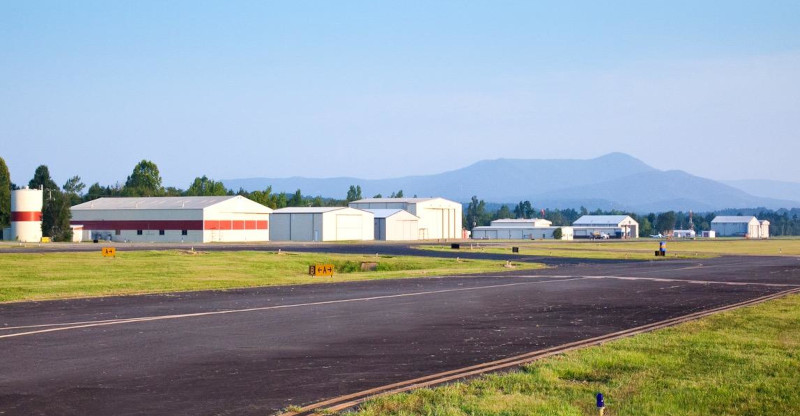 The airfield is also home to a number of flight schools and several instructors. Ogden shares his thoughts about the importance of educating people on flight, noting, “I would always encourage people to learn to fly. There’s so much to offer and it opens up so many horizons for these individuals.”

Recently, Mena Intermountain Municipal Airport has undergone a number of large projects, namely the renovated taxiway Bravo, which was funded by the FAA and the Capital Improvement Program (CIP). The second completed project being the redesigned and resurfaced runway 17/35. Over the last five years, the airport has completed $8.3 million in capital projects.

In the future, they plan on redoing Taxiway Charlie, as well as installing a new weather station.

Airport management has heard from a number of businesses on the field that they’d like to open their doors for an air show. While not in the cards yet, Ogden’s team have penned in their diaries an important date, 8 April 2024, which is the total eclipse of the sun. He explains, “Our little airport is right in the path of total darkness. The state’s tourism board has informed us to expect the airport to be inundated with large crowds, as well as an uptake in air traffic to the field.”

The airport is still interested in attracting more businesses to the airport, which Ogden hopes will occur organically through referrals from existing businesses, as it has usually happened in the past. “From my viewpoint, the businesses on the field seem to cooperate more than compete against each other,” says Ogden.

At the present time, Mena Intermountain Municipal Airport has a broad offering for aviation clients. Whether they’re looking for interior or external work, engines (for Lycoming and Continental General Aviation Engines), or other related services. COVID-19 hasn’t affected the airport in regard to supply chain issues – mainly due to its location and the niche products that the businesses are ordering.

In the next three to five years, Ogden and his management team would like to see a continuation of business growth at the airfield. With people moving out of large urban centers to live in more remote residential properties, the local region is poised to see a business boom – given its proximity to Tulsa, Little Big Rock, Dallas, and Houston to name a few. And because people fly in for an escape to their log cabins, the City of Mena is bound to experience a bump in their economic development.

While the airport has outgrown its grass runways due to its size, Ogden would be thrilled to see these planes make a comeback. He shares, “I’d like to see an uptake in backcountry flying, which could hopefully blossom and bloom. Thirty to forty years ago, there was an active sailplane community on the airfield, because of the thermals and the lift they generate – I would love to see that return.”

Moving into the future, Mena Intermountain Municipal Airport will keep offering all pilots who land at the airfield every service they could wish for and more.