The City of Ketchikan is the southernmost entry point to the famed Inside Passage, a series of waterways that snakes through the stunning wilderness that is Alaska. On one side a port, on the other lush rainforest, Ketchikan has been both home and a popular place to visit since the Tlingit peoples first gave it a name, Kitschk-hin, which either means “The River Belonging to the Kitschk” or “Thundering Wings of an Eagle” – a nod to the fact that there are more bald eagles here than anywhere else in the northern region. The area also happens to boast the largest collection of standing totem poles in the world.

Today, the city is a beautiful nod to both past and present, with a bustling downtown featuring authentic wooden sidewalks and staircases leading from shop to shop, or down to the six cruise ship terminals. It is also an outdoor enthusiast’s paradise nestled on an island in the Pacific.

In an area historically known for fishing, forestry and aviation, the Ketchikan International Airport continues to serve as one of the major airports of the northernmost state, but also as the chief link to southern Alaska.

“Before COVID, our tourism was growing year after year,” explains Alex Peura, Airport Manager, “and this summer has seen a return to almost pre-COVID numbers, so it is the main industry here, along with commercial fishing. This is an incredible place with snow-capped mountains, mist-shrouded forests, and beautiful open coastal ocean scenes. The airport itself is located on a different island, Gravina Island and is separated from Ketchikan by a thousand-foot channel of water. We operate a passenger and vehicle ferry service that runs every 15 minutes to take you over to experience the scenic frontier lifestyle.” 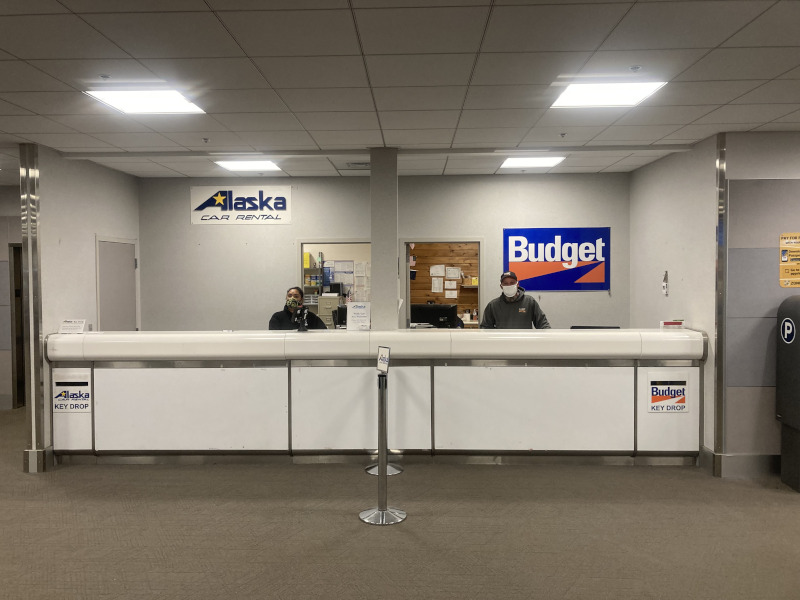 The airport has a single 7500-foot runway, designated as two runways, north and south, as well as taxiways on either end, making Ketchikan quite a safe place to land – always into the headwind with no sidewind effect. Alaskan Airlines flies from Ketchikan south to Seattle year-round and Delta makes the loop during the summer months. Because of its location and north/south direction, the airport is a desirable alternative landing site for other planes when the weather gets rough.

“We also have a floatplane facility,” Peura points out. “Floatplanes are a heavy presence in this area, as they are all through southern Alaska. A lot of our traffic in the summer is people going to various fishing lodges or other outlying places. They will land commercially at Ketchikan and then transfer to our local air taxis.”

Private Charter and Air Taxi services make up a large portion of the traffic. Island Air Express runs commercial charters to Klawock Alaska on the Prince William Islands, all of their wheeled plane transport goes through the airport, as do many of their amphibious charters. Then there is Misty Fjords Aviation that offers sightseeing and charter flights. Those and many of the other charter companies that use the airport actually fly the De Havilland Beaver or the Otter, both famed bush planes that have not been manufactured since the 1950s and ’60s but are still among the best ways to travel in the north.

The airport has a staff of 28 dedicated employees that include the ferry crew, administration, operations, janitorial staff, and ARF (Airport Rescue and Firefighting) personnel. There are also three police officers and a security coordinator. The FBO is Aero Services, which also provides services at Juneau and Sitka. At Ketchikan, they have some private hangar space, as well as a maintenance shop in one of the two buildings they operate inside the secure area. The other building is offices and administration. In addition, they offer tie-downs, fuel service, cargo handling, catering, and even on-site transportation.

According to Peura, “The airport is quite large geographically, but there are also a few other things on the island. There is a sawmill site north of the airport, and some logging activity currently. That site is used as a log transfer facility. Then there are several private properties; most of them are waterfront residential, as well as a few commercial sites. That is all accessible by the ferry from the City of Ketchikan and connected by about 10 miles of gravel road maintained by the government.”

Ketchikan Airport is in a unique situation. The terminal is owned by the Ketchikan Gateway Borough, while the property is owned by the State of Alaska. Peura notes, “We lease the land from them and operate the airport, but the state owns the land. That means the state has a heavy presence in the operation of the airport; they provide various funding and equipment, the FAA control tower, and the ILS. We maintain and run the terminal side of things.”

The terminal itself was constructed in 1976 and has seen renovation and expansion since then, but it is still dated and undersized for the current amount of traffic. The building has recently had a fiber optic update as well as a new wood pellet heating system through a grant from the State of Alaska. A terminal area plan and financial feasibility study are now being completed with an architectural group. Stage one of those projects would see an expansion of 18,000 square feet for $23 million dollars. This would be to expand the first-floor terminal area, expand TSA screening abilities, add more air taxi use areas, as well as construct a second jetway.

“We currently have one jetway and we can have as many as three jets on the ground at a time,” says Peura, “so two of them have to deal with a portable ladder system and to be honest, it rains a lot here on the edge of a rainforest, and that just makes it inconvenient.” In terms of other capital improvements, the runways were redone within the last five or six years, which also saw the addition of the second taxiway, eliminating the need to back taxi on the runway. The setup now, except for the terminal, seems to be serving them well.

A few years ago the federal department of highways put aside money to build a hard link bridge to the airport, but the governor at the time eliminated the project. So, the leftover money was designated by the State of Alaska towards providing improvements to the ferry access. On the Gravina side, that means additional ferry berths as well as parking improvements; on the Ketchikan side there is a large long-term parking lot for people to park and take the ferry across.

Peura explains, “We are improving that in terms of increased parking with automated fares as well as an automated fee system for the ferry. It will also cover additional berths and improvements to the passenger vehicle flow at the terminal. We have two ferries that could operate, and they are administered through federal highway money, but we run the airport as a private enterprise, and we do not rely on grant money – so we must make sure it is cost-effective. Each ferry needs three captains, three deckhands, and two temporary workers. We would like to begin running the second one in the summers, as we do have a high flow of traffic. We are just trying to see what is possible.”

Looking to the next three to five years, Peura admits his focus would be on the expansion of the terminal facilities, especially TSA screening, passenger waiting areas, concessions, and increased ferry service. There are small infrastructure and security changes that could help, as well. He adds, “The growth from tourism has been astounding and the terminal needs to keep pace to make it the best possible experience for the passenger. This is not a large hub airport by any means, but we try to run things efficiently and keep everybody – all the air travellers, air taxis, and those in private planes – happy and satisfied. We try to provide whatever you need to make your time in Ketchikan as smooth and enjoyable as possible.”

What: A state-owned, public-use airport

Petro Marine Services, a family-owned Alaskan business, has delivered “Fine Fuels, Super Service, and Quality Lubricants” to our customers since 1959. From the beginning, we have been committed to being the best in our field of petroleum marketing and distribution – and we continue to hold the value of safely and reliably serving unique customer needs as our top priority.

Over the last six decades. we have grown to become one of Alaska’s largest independent petroleum distribution companies, serving customers throughout Southeast and Southcentral Alaska, as well as the Yukon Territory of Canada. Petro Marine Services’ service area stretches from Ketchikan to Kodiak in Southeast and Southcentral Alaska, while our affiliate companies, Shoreside Petroleum, Inc. and North 60 Petro Ltd, provide services throughout South Central Alaska and the Yukon Territory in Canada, respectively.

Through our network of locations, we serve a broad range of industries such as: aviation, construction, fisheries, marine, mining, petroleum, power generation, timber, tourism, commercial and residential heating oil, and retail fuel stations. Whether fueling a fishing vessel dockside or delivering home heating fuel to a remote cabin in the Alaskan wilderness, our team members complete these services in some of the harshest and most challenging environments on earth.

For more information about our family of companies, please visit our website: