A community of choice for 55,000 residents and scores of thriving businesses, Millcreek Township, Pennsylvania had its roots as one of the original 16 townships of Erie County. Back in the day, families moved from the bayfront settlement of Erie and formed small hamlets, such as Federal Hill, Kearsarge, Marvintown, and Weigelville, which all became part of Millcreek Township. As the Erie settlement grew, first into a borough, then a city, it annexed more and more sections of the township. Ridge Road (U.S. Route 20) was laid west through Millcreek in 1805, and became a popular spot for taverns to locate. The Nicholson Tavern (built in 1836) is still owned by the family and listed on the National Register of Historic Places.

The Township is a haven for both wildlife preservation and recreation. Presque Isle, a recurving sandspit peninsula that connects to the mainland in western Millcreek, was made a state park in 1921 and designated as a National Natural Landmark by the National Park Service. The park is a delight for environmentalists – home to a bird sanctuary with over 150 different identified species. Just west of the entry into Presque Isle, a heavily forested area known as Hopkins Grove was purchased by the Erie Electric Motor Company in 1896 for development into an amusement park. Today, Waldameer is one of the oldest amusement parks in the nation.

Business View Magazine recently asked Township of Millcreek Supervisor, John E. Morgan, and Director of Planning & Development, Matthew Waldinger, for insights into their attractive, forward-thinking community and its many assets and attributes. The following is an edited transcript of that conversation. 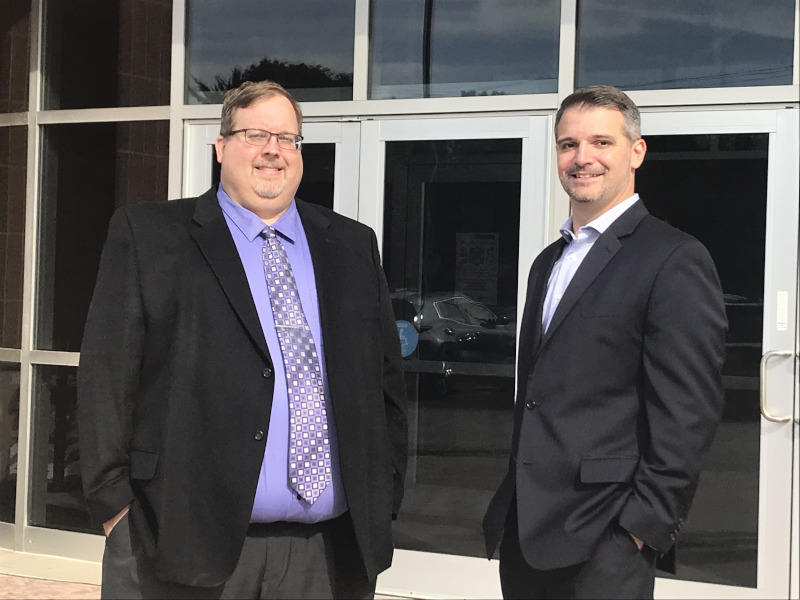 BVM: Can you describe Millcreek from a planning perspective?

Morgan: “We’re about 55,000 residents; the second largest municipality in northwest Pennsylvania and a first ring suburb to the City of Erie, which is about 100,000 residents. In Pennsylvania, there’s a tendency for fiefdoms – for municipalities to compete with one another for resources. In our county alone, there are 38 municipalities. What we’ve been trying to do over the last four years is to find out what is Millcreek’s niche. So, we’re not competing with the City of Erie, but we’re actually fulfilling our role in the metropolitan area to complement the efforts of our neighboring municipalities. And through our comprehensive planning process, we found that we’re strongest in the retail and tourism sectors, and we’re also a community of choice for residents. We want to offer a great sense of place with our recreational and tourist amenities, and our strength in the retail sector, providing shopping and dining options for residents and visitors.”

Waldinger: “We just went through a comprehensive planning process a year ago and we found that Millcreek does have strengths we can build off of. We have some of the highest income households in Erie County – one out of every three families in the County that earn over $100,000 per year live in Millcreek. And one out of every 2.5 families that make $200,000-plus lives here. That’s based mainly on the strength of our housing market, our newer housing stock, and our school district does a good job of bringing those people in. We have seen rebounds in Millennials coming back to Millcreek to roost.”

BVM: What makes Millcreek a special place for residents and tourists?

Waldinger: “In the retail sector, we are home to the Millcreek Mall – the 14th largest mall in the country. It’s a regional mall that anchors our one strong shopping district and serves not only northwestern Pennsylvania, but parts of Ohio and New York, and we also get substantial traffic from Ontario, Canada coming. There is no sales tax on clothing and food products in Pennsylvania, so that is a big driver. We see a lot of bus trips – shopping excursions from Canada that bypass Buffalo and New York and head here for that reason.”

Morgan: “We are the home of Presque Isle State Park – the most visited state park in the country. About four million visitors a year come to see its amazing sunsets and enjoy some of the best beaches on Lake Erie. And we are home to Waldameer Park and Water World, the largest amusement park in the Tri-State area. It’s locally owned by the Nelson family and a great draw for daytrips throughout the region as a low-cost excursion for families. It’s really the Gateway to Presque Isle. So those are our two biggest destinations.

“In addition to that, we have an extensive park system with walking trails, and a BMX Park. We’re host to the Asbury Woods Nature Center in an old-growth forest, as well as the Tom Ridge Environmental Center – a state facility that does a lot of research for the Great Lakes. We really try to embrace the natural aspects of our community and also promote locally-owned businesses like Waldameer Park.” 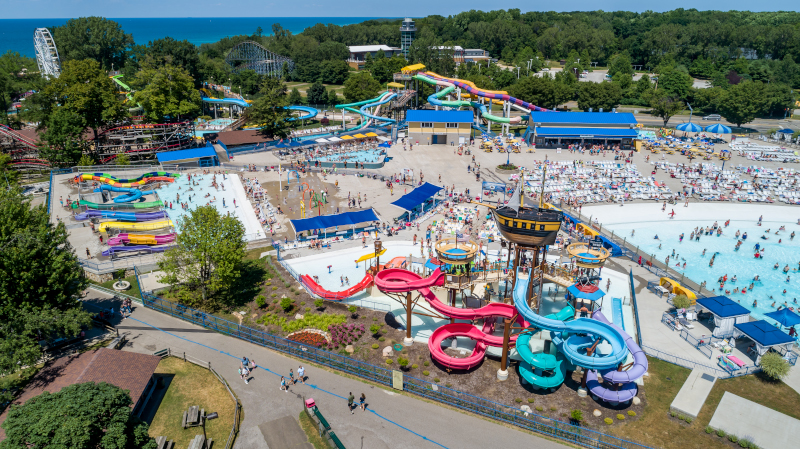 BVM: Do most of your residents commute out of Millcreek to work?

Waldinger: “By the stats, 76 percent of the jobs in Millcreek are held by non-residents; we have a lot of people who come in to work at the Mall. And 47 percent of Millcreek residents who are employed actually work in the City of Erie. Our biggest employers by sector are healthcare (21%), retail (20%), hotel and food service (13%), and manufacturing (10%).”

Morgan: “Most of the white collar jobs are located in the City of Erie, so a large percent of our residents work in downtown Erie. Two of the three major hospitals are located in the city proper. Our township does have a local community hospital, which is also home to the Lake Erie College of Osteopathic Medicine (LECOM), the largest medical school in the country by enrollment. So, our primary employers are Millcreek Township School District, LECOM, and Plastek– a large plastic manufacturer.

“Millcreek, being a community of choice for residents, is really about our symbiotic relationship with the City of Erie. They’re doing a lot of great things with economic development for major businesses and our role is to provide the amenities and secondary businesses to support those efforts. We’re two municipalities but one community, really trying to work and plan together. To be honest, historically, there have been some conflicts between the city and suburban municipalities, mostly based on personalities. In the last four years, I’ve taken office on our three-member board and Erie has a new Mayor, Joe Schember, and we’ve proactively worked to coordinate more and get beyond past issues. It’s really about new leadership and our staff focused on working together. So, we really appreciate that partnership with the City of Erie.”

BVM: Do you have opportunities for mixed-use development?

Waldinger: “We have about 16,000 residential parcels in the township and we’ve recently seen an upsurge in multi-family development. A lot of that has come about because of our comprehensive plan. With that plan, we’ve created a future land-use map to create some new residential opportunities; some new mixed-use opportunities. To fully realize that, we do need to have a new zoning code in place and we’re working now to get a consultant to develop that. But the board has been very receptive to rezoning properties from their current zoning, if they fit the future land-use model. So, we’ve been able to take advantage of some properties that were exclusively commercial, that have now had proposed and approved developments for multi-family. We’re trying to support more of those complementary uses, especially along our major corridors.

“We don’t have an actual downtown area. We have Presque Isle Park, and Peninsula Drive, running north/south, is the main gateway to the park. Just south of the park, West 8th Street is the main retail hub for the district with a lot of small, local stores and a couple of anchor plazas owned by Chip Riehl (Shops at the Colony) and Chris Conrad (West Erie Plaza), who make a point of welcoming and recruiting new local businesses into their spaces. As part of our comprehensive plan, we want to build an area with a downtown feel there that’s identified as uniquely Millcreek, supporting small businesses right near the park.”

BVM: What else would you like people to know about Millcreek Township?

Morgan: “The focus of our comprehensive plan is to create a distinctive Presque Isle District and that 8th Street corridor is key for us to take this natural asset and build on its potential. Right now, Millcreek is Anywhere USA and we want to establish that district as a site for major redevelopment efforts, where residents enjoy going on weekends and tourists want to return to again and again. We are also very fortunate to have an active private sector and great relationships with Millcreek Mall developers, the Cafaro Company, and their partners Baldwin Brothers, who bring in new development prospects to keep that commercial area vital and thriving for us.

“All in all, we are a vibrant, welcoming community. We offer a lot of the intangible things that people are looking for. As part of the Erie metropolitan area, Millcreek has the big city amenities with all the small town charm, and really cares about its residents and businesses. We invite you to join us and help make us the community of choice.”

What: First ring suburb of City of Erie; population approx. 55,000

When Millcreek Mall first opened its doors in 1975 it was a novelty, Erie’s version of the exploding national trend of enclosed shopping malls.  Yet it wouldn’t have succeeded if it stayed the same.  It has grown and changed to suit the times. For nearly 45 years, sustainable growth has been possible thanks to a cooperative, supportive relationship with Millcreek Township and its public officials.   Through constant reinvention, the mall complex has expanded to more than 2 million square feet of commercial space.  With over 180 stores, restaurants, hotels and entertainment venues, the complex is the most dominant retail center within 100 miles.

This super-regional center attracts customers not just from northwest Pennsylvania but also from western New York, northeast Ohio and even Ontario.  (Canadian customers like the enormous retail variety, sales-tax-free clothing and, sometimes, a favorable currency exchange rate.)  It serves as a key destination in the lives of local families and millions of tourists who flock to the Lake Erie shoreline annually.

Recently, the publishers of the statewide website PennLive compiled a list of Pennsylvania’s best shopping malls.  Millcreek was ranked as the third best of that elite list.   To learn more about this dynamic retail destination, visit online at www.millcreekmall.net.