Ideally located in Lancaster County, five miles northwest of downtown Lincoln (Nebraska’s state capital), Lincoln Airport is the second largest airport in the State and one of the 25 largest airports in the U.S. in terms of land size. Geographically, it covers 5500 acres, and has three paved runways. The longest, measuring 12,901 feet, was once designated as an emergency landing site for the Space Shuttle, but never used as such. Indeed, the Airport has seen a world of change in the 100 years since its inception.

Lincoln Airport began life in the early 1920s and is legendary as one of the places where Charles Lindbergh learned to fly and the first place he took lessons. During World War II, it was contracted by the United States Army Air Corps for basic flight training and known, then, as the Lincoln Army Airfield. Returning to civil use following the war, Lincoln Airport became host to a flying unit of the newly formed Nebraska Air National Guard along with a Naval Reserve unit flying patrol aircraft. Operating as the Lincoln Air Force Base, the airfield was also home to a Strategic Air Command (SAC) base supporting Boeing B-47 Stratojet bombers, Boeing KC-97 Stratofreighter refuelling aircraft, and SM-65 Atlas intercontinental ballistic missiles. In 1966, the U.S. Air Force closed the SAC installation. 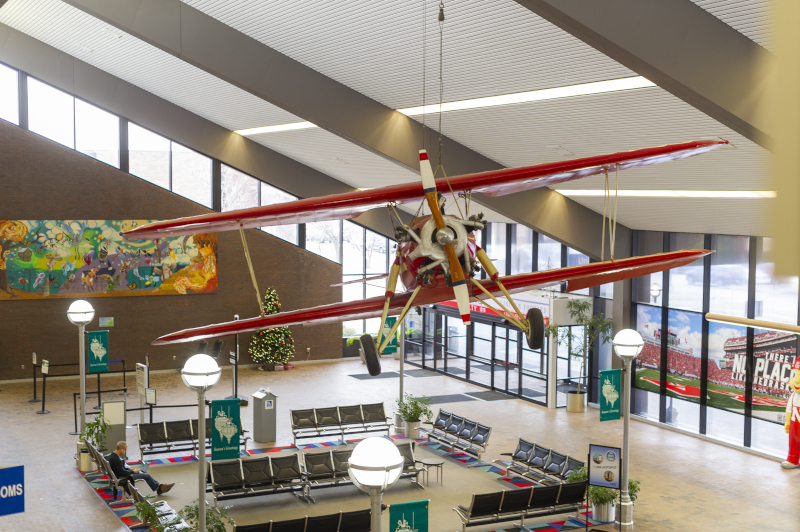 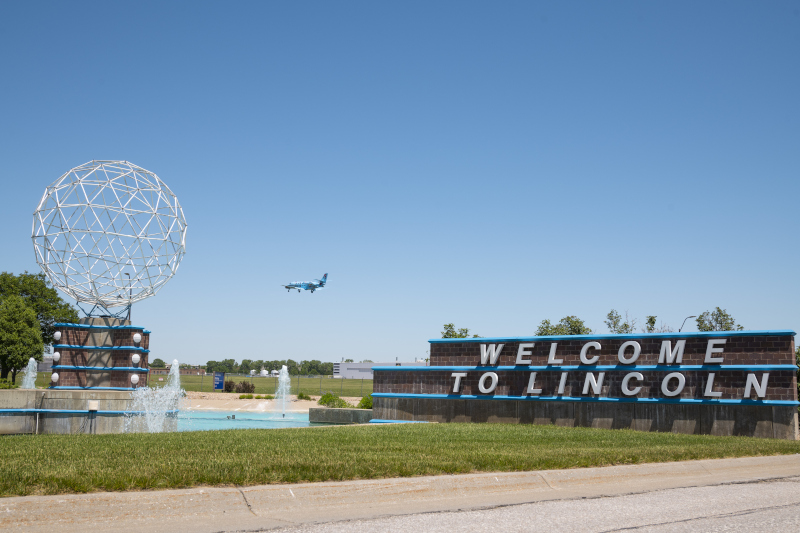 Fast-forward to 2020: Like so many airports, the COVID-19 pandemic has hit Lincoln Airport hard when it comes to commercial aviation, with as much as a 97 percent decline in travel. It is currently hovering at around 20 percent of pre-pandemic traffic. Delta Airlines has indefinitely suspended its service due to demand. United Airlines is still offering four or five flights per day to both Chicago and Denver, but that still only accounts for less than 50% of total pre pandemic commercial activity. While the reduced activities levels present significant challenges, those challenges are being met through efforts to turn short term impacts into long term gains. In that regard, the Airport is undertaking many projects to both increase capacity and make it a better experience for customers.

Executive Director, David Haring, explains, “While we are cognizant of what is going on now and the challenges we all have, not only as the aviation industry but also as individuals, and how that has impacted personal and professional travel, I think it is vital that we continue to be prepared for the recovery that will ultimately come. We’re doing that by enhancing passenger programs and amenities throughout the terminal in a thoughtful and logical way. It’s sometimes thought that the best option in times like these is to hit the pause button. However, we have both a team and a board that believe the contrary can be just as effective of an action. The reduced activity levels in the facility provide the perfect opportunity to invest in our future by undertaking long overdue facility enhancements at a time that creates the least inconvenience for passengers, the most flexibility for contractors, and the best opportunity for significant cost savings for the Airport. These projects, as a whole, will allow the terminal facility to meet both current expectations and future needs, reinforcing the vitality of the Airport as a community asset for years to come.”

The revitalization of the Lincoln Airport Terminal is not a new revelation. “A terminal project has been talked about at different points for the last 20 years,” explains Haring, “and in each case it’s been kicked down the road a bit. We are at a point now where our existing facility is 46 years old and, while structurally sound, it is starting to show the challenges that exist with a ‘70s era facility in a modern commercial aviation world. It’s a split building with two gates on one side of the building and two gates on the other side of the building, both served by two separate checkpoints that were never contemplated when the facility was originally constructed. There is no connectivity between the two ends, and up until recently, there were no food or beverage services within the gate areas, meaning individuals would have to leave security to obtain those services. While the TSA provides adequate staffing for both checkpoints at this time, staffing calculations are based on total passengers, as opposed to total checkpoints, so continues to be a very real concern that a drop in passengers could leave the Airport with insufficient staffing for both checkpoints.  As is the case with many small airports, passengers in Lincoln like the convenience of being able to arrive for their flight within a very tight window. Unfortunately, during our pre pandemic morning rush when 4 flights were leaving within 30 minutes of each other and both checkpoints were in full operation, we were starting to see the significant constraints of our existing layout as passengers were occasionally missing flights due to longer than expected security screening.”

Chad Lay, Director of Planning and Development was tasked with creating a terminal revitalization plan, the original intent being a short-term fix for these critical areas. After looking at the various options, it was quickly apparent that there was no inexpensive, short-term fix. Creating a single checkpoint, making sure there were concession sales inside the security area, expanding the gate hold, moving the gates, even updating the finishes and modernizing the facility amenities ultimately resulted in a $45-million project.

“And so we selected an architectural design team for this project,” says Lay. “The team  is comprised of Alliance out of Minneapolis, who have a lot of experience with airport terminal work, and a local firm here in Lincoln called Davis Design who had performed previous work at our terminal building and are very familiar with the local environment. Alliance leads the team and brings their savviness in the field of aviation to the project. The Alliance / Davis Design team was on the architectural design side of it and the Sampson Construction and Christman team was selected as the construction manager-at-risk and so they will be overtaking and managing the construction of the project.”

An expenditure of this magnitude, especially during a pandemic, led to the need to communicate the vision with more clarity. The Airport hired Rachel Barth, Director of Communications & Customer Engagement, who has been working diligently at connecting with the community. “Some of the things we’ve had to pivot with communications include amping up our social media and our website,” says Barth. “We redesigned the Lincoln Airport website, which went live recently and we now have a website which is clean, updated, customer-friendly, and makes it easier to reach us if you need to. We also added a separate site, next.lincolnairport.com; a microsite that is specific to the terminal project.”

The terminal project is a bit of a hot topic, since we plan to levy a property tax to fund the renovation. It will raise property taxes for people in the city of Lincoln. As Barth explains, “We wanted to make sure we had an avenue for people to ask questions and see the renderings. Once the project gets started that microsite will become vital in terms of updating the public with pictures and photos. It also includes our economic impact study which was done by the Department of Transportation’s Aeronautics division. The study shows how much value LNK brings to our local economy; breaking it down by jobs impacted and visitor dollars – that overall impact is about 1.3 billion dollars a year. Right now, with our commercial aviation hurting so badly, these numbers prove that even though a big part of our business is down, we still have general aviation, our military partners, and our industrial park which are all thriving. Our industrial park is one of the largest in the Midwest and is home to many local businesses who employ thousands of people in our community.”

Haring adds, “We are thrilled to have a thriving general aviation community. We have several FBOs on the airfield, as well as a flight school and a smaller refurbishment operation, and they have continued to persevere throughout the Pandemic. Certain facets of their business, like charter flights, have fallen off but other aspects have remained stable or even picked up. Since both personal and business travel opportunities have significantly declined, it  makes sense that many aircraft owners or operators would take the opportunity to complete overhauls or inspections that they have been trying to work in to what is usually a very congested flight schedule. While we obviously would love to see our commercial aeronautical activity as busy as our general aviation community, we are thrilled that our general aviation partners in Lincoln have been able to weather the storm so effectively.”

Another reality is that Offutt Air Force Base will be temporarily relocating from Omaha to Lincoln, due to construction activities on the only runway at their Base. During that 12-24-month time frame, the bulk of the flying assets will relocate to Lincoln Airport. As a result of the relocations, sizeable work has taken place on the west side of the airfield including both on the west ramp and the adjacent facilities, many of which are former Lincoln Air Force base assets.

The Airport is also home to the LNK Enterprise Park, a 1,000 acre industrial park located on the west side of the airfield.  Over 95% of the facilities in the LNK Enterprise Park are fully leased and the Airport has had no tenants falter as a result of the Pandemic. “We did offer a willingness to work with all of our tenants to help mitigate any pandemic related hardships,” says Haring. “”We are all in this together.”  That saying has been a common theme for all of us throughout this pandemic. We understood the value of being aware of the challenges that our tenants were facing and wanted to be part of the solution as opposed to part of the problem. However, we have been very fortunate that, while we extended offers to work with tenants if needed, all of our tenants have been able to stay in their current facilities without catastrophic interruptions to their operations. Some of our larger tenants have actually needed to expand their operations since March and that has resulted in the leasing of other facilities in the park. The Enterprise Park continues to be one of, if not the most, important lifelines throughout all of this. With such a large component of our revenue derived from the industrial park, we are likely in a slightly better position to sustain throughout this climate than many other facilities of similar size.”

The combined efforts and impacts of general aviation, commercial aviation, and military aviation, along with a concerted effort to maintain the fiscal health of industrial park tenants, has made it possible for Lincoln Airport to weather the storm thus far, but their relentless pursuit of perfection, as well as a vision for how to turn this time into an advantage has not hurt them either. They will come out of it stronger than ever and more capable of giving the customer what they truly deserve – nothing but the best.

WHAT:  A commercial and general aviation airport co-located with an Air National Guard Base.