Before Southwest Airlines announced in December 2020 that it would start offering service out of Fresno Yosemite International Airport, airline representatives learned of a plan for expansion known as FATforward. The name is a play on Fresno Air Terminal, but the project is serious business. It involves a two-year terminal expansion phase set to begin in the fall of 2021, and the construction of a new, four-level parking garage that’s expected to be finished in August.

“Southwest said that’s one of the most important things you could have done, because an airport needs to be able to handle the region’s demand,” recalls Kevin Meikle, Director of Aviation. “We need to be able to handle the airline’s customers. As soon as they buy their ticket from home in their living room and they arrive onsite, it’s the airline’s customer until they leave, and we need to provide the infrastructure to accommodate that. And that’s exactly what FATforward is all about.” 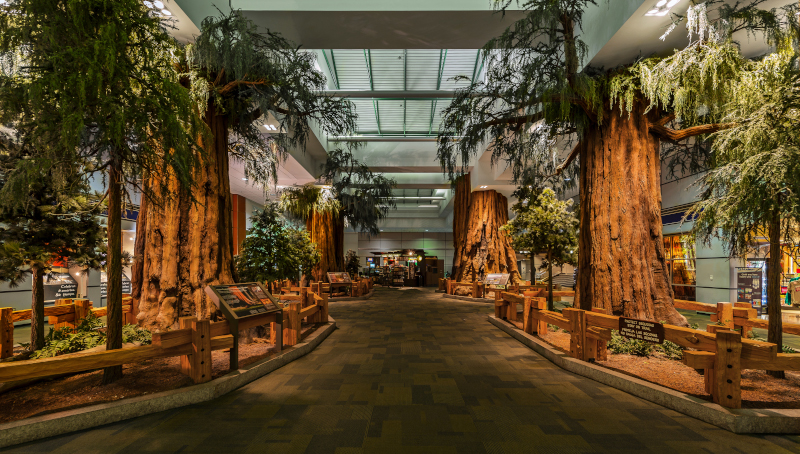 Activity fell off when the pandemic hit in late March and early April 2020 but started coming back in May. That growth has continued and the airport is once again recovering twice as fast as the national average. Meikle reports, “We’re hitting days where we’re over 70 percent of what we were last year at the same time. Where some other airports are still down at 20, and 25 and 30 percent, for some reason this region of California seems to have bounced back – whether you call it passenger confidence, or just the people needing to go from point A to point B – for whatever reason, it just seems to happen in our market.” A big reason is the airport’s location in California’s central valley; the growth in that area and its distance from the state’s other major population centers.

Fresno Yosemite International started out as a military base used by the U.S. Air Force at what was then known as Hammer Airfield during World War II. Civilians used nearby Fresno Chandler Executive Airport. Commercial airline services moved from there to Fresno Air Terminal by 1948, after the War Assets Administration transferred Hammer Airfield to the City of Fresno. From 1950 to 1960, the City of Fresno saw its population increase by nearly 50 percent and it has experienced double digit population growth nearly every decade since.

The city is also located in one of the world’s most productive agricultural regions. An estimated $17 billion worth of crops are grown in California’s central valley annually, according to the U.S. Geological Survey. About one-fourth of the nation’s food comes from the region. The airport also serves as the gateway to three of the country’s most visited National Parks: Yosemite, Sequoia, and Kings Canyon. And there’s not much competition nearby. The closest commercial airport is in San Jose, a drive of at least two and a half hours. San Francisco International Airport is more than three hours away and Los Angeles International Airport is even farther.

This combination not only makes Fresno Yosemite International the primary airport for the central valley, but it also impacts passenger behavior. “We have a large geographic catchment area here in Fresno that serves the airport,” Meikle explains. “In other words, people will drive in from quite a distance that you wouldn’t normally take an Uber or Lyft on. And so the parking rate at this airport hovers around 50 percent, meaning 50 percent of the passengers who fly out of our airport use the parking lot. Normally for an airport our size, it’s about 37 or 38 percent use the parking lot. That’s a huge difference. So we have a high utilization rate for parking.”

The new parking garage will help address that need. It’s expected to have 917 spaces. Spots that comply with Americans with Disabilities Act requirements will be located in covered areas of the garage. There will also be several electric vehicle charging stations. Solar panels on top of the garage will add to a system that already provides the airport with two megawatts of power. Increasing energy efficiency is a priority, not only because it’s good for the environment, but it also helps Fresno Yosemite International remain self-sufficient. Meikle explains, “Because to the extent that we, as an airport, are able to control costs, that helps mitigate the costs to the airlines, because airports are required to get cost recovery out of the airlines. And so we look at every aspect of the business where we can to try to maximize revenue in addition to controlling costs. Being green and being sustainable is very much a part of that equation.”

Efficiency efforts at the airport extend beyond energy. Fresno Yosemite International has employed a common-use technology model for several years. Instead of each airline having its own dedicated counter space and gate, they can all use any space, creating greater flexibility to match fluctuations in customer volume. “We have enough gates for our airlines, but if you have a flight that’s either early or a flight that’s late, and the gate that they would normally be on is used, they can go to another empty gate and use that and just log on,” says Meikle. “In other words, it’s a very fluid situation with the airlines, what it does is it enhances the useful life of the facilities. And this use of technology keeps us from having to build more bricks and mortar than we would normally have to build.”

While common-use technology has helped delay the need for new construction, the seemingly relentless growth in activity has necessitated another expansion. In 2006, Fresno Yosemite International opened a state-of-the-art Federal Inspection Station to receive the airport’s first international flight from Guadalajara, Mexico. This made Fresno Yosemite International one of the few U.S. airports of its size with a fully operational Federal Inspection Station.

The terminal facility underwent a complete renovation in 2008 with the doubling of the baggage claim area, terminal lobby remodel, and security screening checkpoint expansion. Now, the airport consistently hovers at about number three in the U.S. for passengers heading to the Guadalajara/western Mexico region. “And our current facility is just busting at the seams,” Meikle says. “People are having to wait outside, especially with social distancing.”

Fresno Yosemite International has a campaign called “Ready to Move You Forward” that highlights enhanced health and safety measures taken to ensure passengers can travel during the COVID-19 pandemic with peace of mind. The airport follows all U.S. Centers for Disease Control and Prevention best practices and has also enrolled in the Global Biorisk Advisory Council’s STAR Facility Accreditation Program. This performance-based program is designed to help facilities establish a comprehensive system of cleaning, disinfection and infectious disease prevention.

While the pandemic is rightfully at the forefront of people’s minds now, leaders in the airport industry must also continue making long-term plans. And at Fresno Yosemite International, that means ensuring the airport is prepared to meet the growing needs of the region it serves. Meikle admits, “We’re dealing with a pandemic that’s impacting everybody, but yet we’ve just got to keep looking forward. You can’t plan for a month from now, or six months from now, you’ve got to plan for five years and 10 years from now. And that’s what we’re trying to do, that’s what the focus is.”

Q&D Aviation Group’s Services
Q&D Construction has assembled a mobile, nimble and reliable aviation workforce with the tools and industry-specific training to execute your airline or airport project. Q&D is the right mix of resources to fulfill critical schedule commitments and a supportive approach to customer service that promotes teamwork while fulfilling all project goals.