A city of surprises

Business View Magazine interviews representatives from Jacksonville, Illinois, as part of our series on best practices of American towns and cities.

The City of Jacksonville is located in west central Illinois, 35 miles west of Springfield, the state capital. It is the county seat of Morgan County and one of the oldest towns in the Land of Lincoln, founded in 1825. Jacksonville was established by Yankee settlers from New England, who laid out farms, constructed roads, erected government buildings, and established post routes. They were part of a wave of European/American farmers who headed west into what was then the wilds of the Northwest Territory, during the early 1800s.

The town grew at a rapid rate, and a town square was quickly developed. A new courthouse was built on the square, churches were constructed, railroads were planned, and stores and taverns were built. By 1834, Jacksonville had the largest population of any city in the State of Illinois, vastly outnumbering Chicago, which had been founded only the year before. In its early years, Jacksonville became known as the “Athens of the Midwest” because of its commitment to education. Illinois College, the first college in the state to award a degree, was founded in 1829; the Illinois School for the Deaf was founded in 1839; the Illinois School for the Visually Impaired was founded in 1849; and MacMurray College, which just closed its doors this past May, was one of the oldest institutions in the United States created for the education of women. 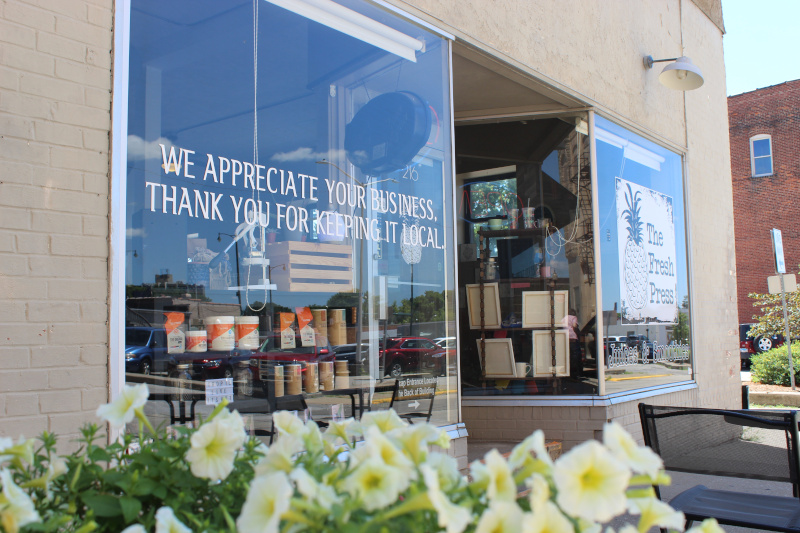 Today, this town of approximately 20,000 is a proud community that, surprisingly, tends to punch well above its weight, hosting a thriving industrial sector while also offering its residents many cultural, educational, and recreational amenities. “We have two facilities that are well-known,” says Kristin Jamison, President of Marketing and Communications for the Jacksonville Regional Economic Development Corporation (JREDC), an investor-based organization that works to spur economic development in the region. “One is Reynolds Consumer Products – they make garbage bags and serve as a distribution center. And Nestlé has a Coffee-mate plant here; all of the non-dairy coffee creamer manufactured by Nestlé is made here in Jacksonville.”

Jacksonville is also the home of the Eli Bridge Company, a legacy manufacturer of Ferris wheels and other amusement rides such as the Scrambler. W.E. Sullivan founded the firm with the introduction of his first portable “Big Eli” Wheel on the Jacksonville Square on May 23, 1900. “So, we do have a strong manufacturing base and we continue to look to see how we can bring in new opportunities,” Jamison notes. One new firm in Jacksonville is CCK Automations, which specializes in electronic circuit board manufacturing and panel building. “It’s a homegrown company that moved out of the founder’s garage and now employs over 100 people,” she adds.

According to Mayor Andy Ezard, Jacksonville is also continuing to revitalize its downtown. “We’ve accomplished three different phases – in the middle, the north, and the south – and now we’re going to do the east leg: new utilities, new sidewalks, new streetscapes, and lighting,” he explains. “That will complete the fourth leg and, hopefully, that will be done by the end of the year, which will only leave one more leg left. We anticipate doing that over the next couple of years.”

“There’s been $50 million in public and private investment, just in our downtown, and there’s been an 85 percent reduction in vacancy rates since 1999,” Jamison reports. “So, we’ve definitely seen a lot of effort from our volunteers and our stakeholders’ work to make the downtown area attractive and a destination for our community members as well as for travel and tourism.”

Ezard says that over the last 20 years, the City’s vision for downtown has expanded to include providing opportunities for the younger generation of workers, who unlike their parents, seem to be less interested in living in a big house in the suburbs with two cars in the driveway, and tend to prefer more urban environments with walkable, bikeable neighborhoods and close-by amenities. “As we’ve dived into the project, we’ve seen the potential and the difference in what our young professionals want,” he discloses. “So, we’ve adapted our thinking and we are certainly trying to promote growth as far as living in our downtown area and providing things for them to do. That’s been our motivation. And we’ve seen a lot of movement in the downtown; we’ve got new businesses; there are folks living downtown, now; so, there’s opportunity there.”

“It is strengthening our quality of life for the area, and as we’re looking at Millennials who are interested in maybe moving out of a big city and finding a place where they can raise their family, we can point to our low cost of living and our safe environment as a benefit for them, as well,” Jamison adds.

Kelly W. Hall is the City’s Former Director of Community Development, which is in charge of inspection, planning, and code and zone enforcement. He weighs in on some of Jacksonville’s recent accomplishments: “The mayor mentioned the success of our downtown, and I’d like to mention that we’ve had a 20-year TIF (Tax Increment Financing) for the downtown area, so we’ve been able to leverage three to one in private dollars to public dollars. It’s been a very successful program, maintaining the existing structures downtown, therefore providing buildings for new businesses and maintaining the existing businesses we have.

“Some of the other highlights I’d like to mention are our healthcare expansions. We’ve had multiple healthcare facilities and new agencies move into the Jacksonville area, all associated with our original Passavant Hospital. We now have HSHS St. John’s Hospital out of Springfield, Illinois located in our community, as well as Memorial Healthcare Systems that are now a big part of our existing hospital. Springfield Clinic is adding a $14 million addition to our hospital’s campus, and an existing Prompt Care facility is undertaking at $1.3 million facelift. They, in turn, provide a lot of offshoot business for our community have proven to be very successful. Along with that, we have had recent growth with assisted living in our community and those projects. In fact, one of the new projects already expanding is one that was just completed two years ago. So, those areas have prospered.

“A few years ago, we lost a state institution that was a big employer in the City of Jacksonville – our Jacksonville Developmental Health Center. It was quite a blow for the community. Some other decisions have been made, nationally, by corporate entities, and sometimes the fallout is felt on a local level. So, while we have lost some jobs in some areas, others have continued to increase. Our agricultural base in this area is very strong, as well, and we have a lot of supporting businesses with agriculture. So, we continue to maintain the existing industry which helps with employment and the job base around the community.”

“We also are being very progressive as far as future development,” Ezard notes, referring to Jacksonville’s Eastgate Industrial Park, which is home to nine businesses employing more than 250 people. “Twenty years ago, we purchased some land through a conglomerate of banks and Morgan County. Now that Park is filled. We also bought a piece of property across the street from the Industrial Park, a little over 80 acres, shovel-ready, with electricity, rail to the north, and interstate to the east. So, we’re ready to pounce and we’ve had a lot of looks on that property. And, last year, we completed a $30 who recently retired as Jacksonville’s …-million water plant. We anticipate that when we get new industry here, and if there is ever a need for more water, we will be able to satisfy that.”

Hall, who recently retired as Jacksonville’s Acting Director of its Parks and Recreation Department, and as such was responsible for maintaining the City’s green spaces and recreational facilities, says, “Greenspace-wise, we have nine parks throughout the town. And we’re renovating our parks – one every other year. We’ve taken parks and lakes to a new level. We’ve added physical fitness and health-associated type activities; we’ve created two separate nature trails on the south side of Lake Jacksonville that have proven to be very popular. This year, we completed a trail on the north side, which is all hard-surfaced paved and we allow golf carts for senior citizens to meander the path. It’s a two-mile course that follows the lakeshore. We have solicited local organizations and have installed new toys and equipment throughout our parks. One is all-access with the hard rubber surface that the Elks helped finance. It’s been a very big addition to the community park located in the center of town. And we have a nice big dog park.”

“Also on the recreational side, we do attract baseball and softball teams from hundreds of miles away, every summer,” Jamison adds. “We have six turf fields. Those types of complexes might be something you’d expect in a larger city. And we have three beautiful golf courses. So, truly, sports and recreation is something that we hang our hat on here.”

“We have a lot of amenities for a town our size,” Hall adds. “We have a thriving arts scene. We have events downtown. We have a symphony. We have a very active historical society along with archives and we’re working on a location for a historical museum within one of our very own landmark structures. Jacksonville has several nationally-designated landmarks, so that’s another area that we take very seriously.”

Jacksonville, Illinois considers itself a city of surprises. It’s a community rich in historical treasures, with thriving arts, education, industry, and culture, all wrapped in Midwest hospitality. All in all, it’s an excellent place to live, work, and play.

WELCOME TO CEDARHURST of JACKSONVILLE

At Cedarhurst of Jacksonville, we provide truly person-directed care, taking the time to know and work with each resident as an individual and providing them with care that’s as unique as they are. Whether in Assisted Living or Memory Care, our caring, compassionate staff, first-rate amenities, beautiful environment and welcoming, supportive atmosphere make Cedarhurst a secure, enriching place to live.

Here, individual attention informs almost everything we do. You can see it in the wide array of tailored activities and programs, designed to engage and delight. Hear it in the warm interactions between our compassionate staff and our residents. Taste it in a special dish prepared by our chef from a resident’s favorite recipe. And feel it in every apartment and every lively gathering space.

Experience the Cedarhurst Difference with:

With exceptional staff, amenities, comfort and care, you can rest assured that Cedarhurst of Jacksonville will provide all life’s necessities, and more. If you have questions, we’re always here to help. Just call for more information.