Business View Magazine interviews Mathew Eddy, Planning and Development Director of Biddeford, ME, as part of our focus on best practices of American cities.

Biddeford, a city on the Saco River in present-day York County, Maine, was first settled by physician, Richard Vines, in the winter of 1616-17, making it the site of one of the earliest European settlements in the United States, predating the Mayflower landing in Plymouth, Massachusetts, (located 100 miles to the south) by approximately four years. Biddeford was first incorporated as the Town of Saco in 1653, with lumber and fish becoming the community’s chief exports. The town was reorganized in 1718 as Biddeford, after Bideford, a town in Devon, England, from which some settlers had emigrated. In 1762, the land northeast of the river was set off as Pepperellborough, which was renamed Saco in 1805.

By the middle of the 18th century, the developing twin mill towns of Saco and Biddeford had granite quarries and brickyards, in addition to lumber and grain mills. Major textile manufacturing facilities were constructed along the riverbanks, including the Laconia Company in 1845, and the Pepperell Company in 1850. The mills attracted waves of immigrants, including the Irish, Albanians, and French-Canadians from the province of Quebec, and Biddeford was incorporated as a city in 1855. At one time, the textile mills in Biddeford employed as many as 12,000 people, but as happened elsewhere, the industry entered a long period of decline. As of 2009, the last remaining textile company in the city, WestPoint Home, closed. 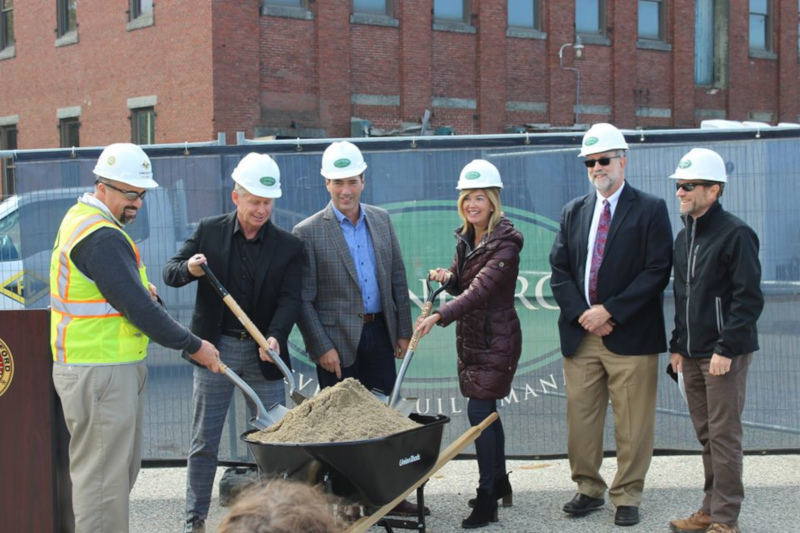 In that same year, the city administration in Biddeford created a task force to discuss the future of the Maine Energy Recovery Co. (MERC), a waste-to-energy plant that was built in the mid 1980s in order to deal with the growing landfills in Biddeford, Saco, and other surrounding towns. According to Mathew Eddy, Biddeford’s Planning & Development Director, the plant never operated the way in which it was intended and was repeatedly fined for ash and toxic emissions. “It ended up creating quite a bit of smell; it ended up burning a lot more than they had planned on; and it became a detractor to anybody looking at redeveloping the mills,” he reports. After years of contentious discussions between MERC’s owners and the city, Biddeford finally purchased the plant in 2012 for $6.65 million and tore it down.

The removal of the MERC facility helped spur a wave of redevelopment of several of the defunct mills into the city’s new Mill District, bounded by Main Street, Lincoln Street, and the Saco River. Today, the District includes about two million square feet of mill space that is the process of being repurposed into an “urban village” comprised of residential, commercial, and industrial uses, thousands of parking spaces, as well as a brand new RiverWalk along the banks of the Saco River.

“We have a number of owners, all of whom are working on projects,” Eddy continues. “And the fellow that deserves most of the credit is Doug Sanford; he owned two mill complexes – the North Dam Mill Complex and the Pepperell Mill Complex. Doug has developed both of those complexes into a combination of residential and business uses. He has about 700,000 square feet to go; some of it is the best space along the river.” The North Dam Mill is a three-building complex that once was an electric blanket factory, and, today, houses more than 150 residential and commercial tenants from woodworkers to bookbinders. The Pepperell Mill Campus is a vibrant community where hundreds of businesses and people work and live side by side on 17 acres.

“Then, there’s a project called Riverdam Mill, which is one of the real pristine sites on Saco Falls,” Eddy adds. “It’s under construction, right now. There’s a distillery, a brewery, there’s going to be a restaurant on the river, and 70 market-rate apartment units. It’s a joint development project between the community and the owners. We put together a Tax Increment Financing proposal to support them in the first ten years; we obtained brownfield money to do the demolition of a corner of the building that was deemed unsafe; and we have worked with them to get through the permitting process.” As part of the 330,000-sq.-ft. Riverdam Mill project, the city has retained permanent easements to the land between the building and the river wall to expand the RiverWalk, which will open up public access to the river and provide necessary pedestrian connections through the downtown. 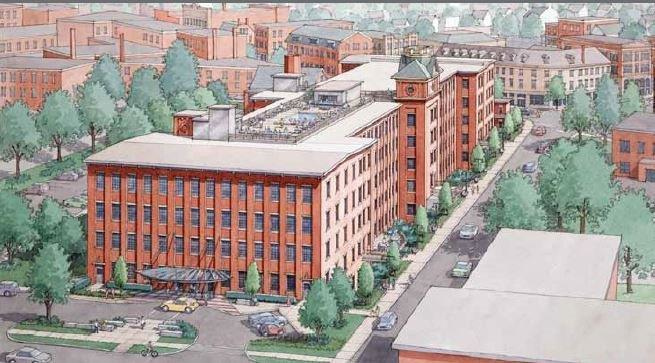 “The next building is called Lincoln Mill,” says Eddy. “It’s one of the larger single structures in the Mill District. That’s being rehabbed into 148 market-rate units, with a 33-unit hotel, a restaurant, some commercial space, and an exercise center. It’s all under development, right now. It was another public/private development. The city took a million dollars worth of TIF dollars and redeveloped Lincoln St. – sidewalks, lighting, we put the power underground, and developed some really interesting pedestrian-oriented safety features. Lincoln Mill also includes a seven-year TIF to help get it going. They should have 140 units on the market within a year or a year-and-a-half.”

Finally, there is the redevelopment of the former MERC site at 3 Lincoln St. “We’ve entered into an agreement with the development team of Jim Brady and Brian Eng,” Eddy reports. “Brady is a significant developer, particularly in the hospitality industry. Once we approve the conceptual plan, it will be six months to approve the site engineering, and then, six months to get approvals. So, we expect them to begin to come onboard in 2022.” The developers seek to incorporate a mixture of residential, retail, office, hospitality, education, and services, while the city is building a parking garage in between the two commercial clusters. The parking garage project, due to be built by early 2021, will be the city’s first. “Every one of these Mill District opportunities is a public/private partnership in one way or another,” Eddy explains. “We are very business-friendly and ready to move quickly with any developer.”

Meanwhile, Eddy adds that the city has also been busy with other projects. “We redeveloped all of Main St. – all new sidewalks, all new infrastructure, all new lighting. And we have the RiverWalk that we’re putting in place along the Saco River that abuts against a lot of the Mill District buildings. It’s special in that a lot of the old-timers in the community have never seen Saco Falls, even if they lived and worked in the mills. So, opening the Falls up to the community is a pure discovery. When we get done with the Riverwalk, it will be a world-class experience.”

All of these redevelopment projects have opened up the residential housing market, and Eddy says that Biddeford, once shunned because of the smelly air surrounding the MERC plant, has become a very popular place for the millennial generation. “We are a very young community,” he remarks. “We’re the youngest city in the State of Maine – in our downtown district, we’re about 29 years old; in our community, about 34, which is very unusual. The people are coming here because it has an urban flair that they really like. So, we have focused on developing businesses and working with the mill owners and mill developers on identifying residential units and businesses that are attractive to Millennials. Our population is about 21,000, and we’re growing at about a one-percent rate, but I think we’re going to see a little bit more in the next census, because we’ve added about 350 units. Altogether (with two new projects proposed), we’re going to have about 600 units of new housing – some of it subsidized, some of it market-rate. So, we expect to continue to grow and develop in a very defined urban manner. We’re a small city with an urban scale. ”

So, Biddeford is on the march to attract both new businesses, as well as the young workers who will work in them, while concomitantly occupying homes in the city’s older neighborhoods, as well as the new apartments carved out of the former mill buildings. “When I look at Biddeford, I see a community that was skipped over because of the waste-to-energy plant,” Eddy notes. “Now, we’re seen as a reasonable alternative for companies from Portland and Boston.” The city is also witnessing the retreat of many absentee landlords who bought up much of the city’s old housing stock on the cheap in the 1970s and ‘80s, and are now dumping their properties as the city’s new inspection program is forcing them either to upgrade their buildings or sell them. “So the market is beginning to take off, almost to the point of being too fast,” Eddy admits. “At the same time we’re investing in the downtown Mill District, we’re racing to try to preserve as much affordable housing in our upper residential neighborhoods as we can before we lose it. It’s an interesting dance.”

“The perception of the community, both internally and externally, has begun to change,” Eddy says, in conclusion. “We were known as the smelly city on the coast. And that’s no longer the case. We are on the Saco River and the Atlantic Ocean. We have the Biddeford Pool (six miles southeast of downtown) that represents one of the most beautiful beaches in southern Maine and the Saco River is probably the most protected river because it is a major water supply source for us and a backup for the Boston system. So, we have this really unique balance of natural resources and in the middle of all this we have this Mill District that once used the river as a source of power. While some buildings have been torn down, the core remains and it creates beautiful campus potential. So, we’re unique. And our location puts us right on the Downeaster Train Line to Boston; we’re close to the Portland Airport; and we have the Maine Turnpike skirting the middle edge of the community, providing easy truck and car access for all our businesses. So, you can live, work, play and get all your services here without leaving.”

WHERE: On the Saco River in York County