Beverly Regional Airport (BVY) is a city-owned, public-use general aviation airport nestled in the Massachusetts North Shore municipalities of Beverly, Danvers, and Wenham – three nautical miles northwest of Beverly’s central business district and 14 miles north of downtown Boston. Classified as a business category, general aviation/reliever airport, BVY not only meets the aviation needs (from small piston to large corporate aircraft) of the North Shore, it also serves as one of three general aviation reliever airports within the Boston metropolitan area for Logan International Airport. By the numbers, Beverly Regional has two runways (with lengths of 5,001’ and 4,755’), an air traffic control tower, a premium quality FBO, nearly 57,000 annual operations (2019) of which nearly half were transient aircraft. Capitalizing on the growth being experienced in eastern Massachusetts, BVY is now the second ranked general aviation airport (in terms of total operations) within the Commonwealth.

One of the oldest cities in the U.S. and called the “birthplace of the American Industrial Revolution,” the City of Beverly has experienced a new economic revolution of sorts rooted largely in health care, education, advanced manufacturing, and tech jobs. If fact, the City has seen over a 21% increase in job growth since 2001 that is anticipated to increase as Boston area development continues to drive northward. But with such phenomenal growth comes challenges associated with housing, industrial/business park demands, and transportation. 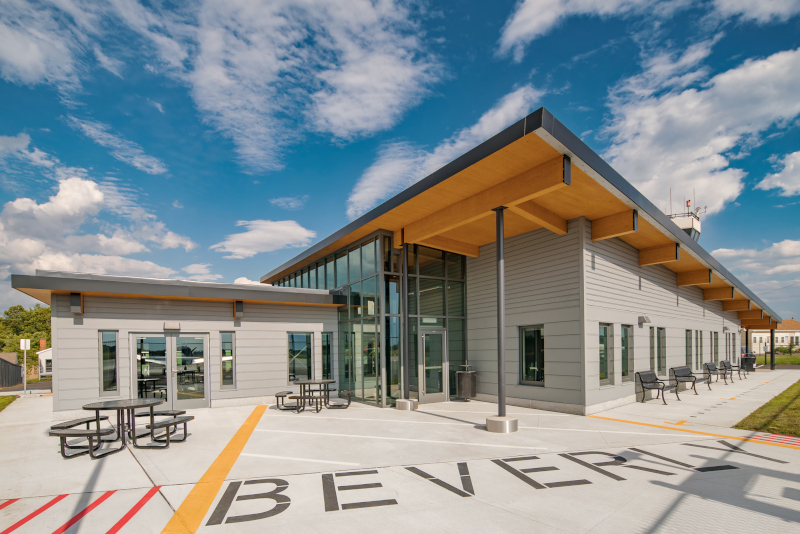 BVY is helping to meet those challenges by supporting local industries and encouraging additional business development and expansion for cities and towns throughout the area by providing direct, quick, convenient general aviation access to the region, free from the typical congestion experienced in the Boston metropolitan area. With its strategic location covering the northern metro area, BVY has experienced robust operational growth, particularly with respect to business and corporate use. This is reflected in the Airport’s changing fleet mix, as operators work to meet the growing needs of area businesses. This evolution in activity has prompted the Federal Aviation Administration (FAA) to fund the development of a new Airport Master Plan specifically designed to examine the Airport’s future infrastructure demands and land use requirements.

Airport Director of Beverly Regional Airport, Gloria Bouillon, says “We are redefining the mission and vision statement of the Airport to reflect its transformation from that of an active local airport to a regional economic generator. Beyond that, we are also so excited to incorporate our focus on customer service into our overall mission, which has really given our airport the ‘wow’ factor received from our clients and customers. We are consistently seeing this in all areas of our operations. We are growing, our businesses are flourishing, and our operations have doubled in the last four years. Now, the challenge is, how do we meet these new demands and capitalize on this incredible opportunity?”

The Airport’s history dates back to 1928 when it was built through the efforts of the Beverly Aero Club and the Beverly Chamber of Commerce. Not long afterwards, the City of Beverly assumed ownership. During World War II the U.S. Navy operated the airport under a joint-use agreement until 1950 when it was formally returned to the City of Beverly. On November 2, 2015, the Beverly Municipal Airport changed its name to the Beverly Regional Airport – one of 39 public use airports within the Commonwealth of Massachusetts.

Today, Beverly Regional Airport generates approximately $34.300,000 per year in economic activity to the local area according to a recent economic impact study. Beyond the robust economic benefits it provides to the community, the Airport works closely with local business communities to promote the Airport on local, regional, and national levels. Robert Bradford, the President of North Shore Chamber of Commerce stated, “I see the Airport as a critical economic development asset for the region that has not been realized yet.”

Airport Commission Chair, Scott Dullea, proclaims “Beverly Airport has seen unprecedented positive growth in recent years. The mindset locally has changed because of outreach to the community and local businesses. What used to be a wait and see approach to growth has been supplanted by Ms. Bouillon’s proactive outreach which has garnered interest and investment. We have ushered in a new era of excitement of what can be accomplished. The Airport has been stewarded by the energetic leadership of both Ms. Bouillon and Mayor Cahill and despite these uncertain times, the future for Beverly Airport looks bright. ” 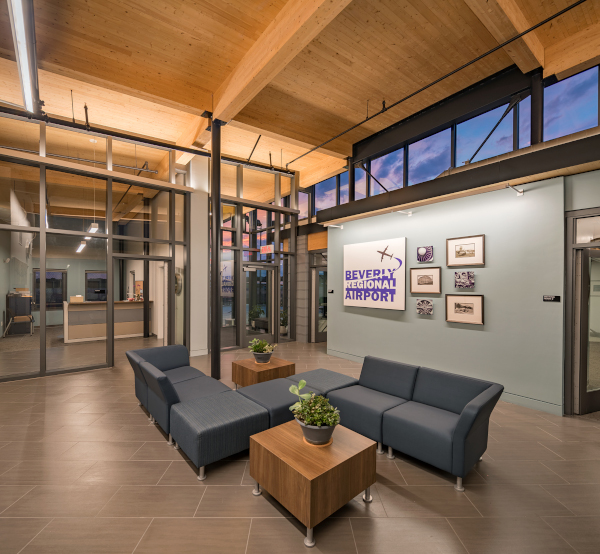 The new Airport Master Plan will identify long-term needs and growth opportunities for BVY and the surrounding communities, while also considering the natural resources and community feel that makes Beverly and the North Shore special. Some anticipated future improvement projects include hangar development, taxiway improvements, acquisition of easements, ramp design and reconstruction, obstruction clearing, and the reconstruction of its primary runway.

Bouillon explains, “The Airport is owned by the City of Beverly and located in the municipalities of Beverly, Danvers, and Wenham on over 415 acres with over 2 million square feet of pavement. Whenever we do projects, we have very close coordination with the three municipalities. We maintain a strong connection with all of our partner agencies, including the Federal Aviation Administration, the Massachusetts Department of Transportation Aeronautics Division, and the Airport Commission who have all consistently supported the Airport and recognize its importance in the National Air Transportation framework.

“We are an enterprise fund, so as a general aviation airport we don’t have passenger / customer facility charges. We have to rely on aeronautical and non-aeronautical businesses that are primarily customer driven. Each business located on the Airport has its own marketing plan and we work to incorporate these plans into our overall strategy to propel the Airport forward. It’s refreshing to have these business and stakeholder relationships that work so well together. We collectively put our heads together to work on development, phasing construction, community relations, and promotion of the airport. We prioritize our projects and all of our operating revenues go back into airport development, infrastructure, safety related projects, and airport operations. Many of our 18 businesses have made significant contributions in infrastructure development at the Airport. We are seeing the many benefits in this effective partnership in the consistent positive reviews we receive daily from customers and clients.”

The Airport is self-sufficient and operates like a business with the highest income generated from ground leases issued to aeronautical and non-aeronautical businesses. There is also landing traffic revenue, as well as fuel sales. Jet aircraft provide the primary revenue source for the Airport with landed traffic having increased more than 17 percent over last year alone. BVY currently has over 100 based aircraft, including seven jets, five helicopters, and eight multi-engine aircraft. According to Bouillon, “We’re considered a business use category airport because of the high number of corporate users we have. Our location, 14 nautical miles north of Logan, is a strength but also poses challenges because of the passenger service aspect. It’s a strength because we’re able to alleviate the general aviation needs from Boston. The corporate users can come into Beverly without any highway delays that are so common in the Boston metro area. Additionally, with our having International Customs and Border Patrol, we experience more than 65 international flights per year. And last year, a Dassault Falcon 8X came from England to Beverly Airport for a speed record, because of the no delay ability to come into the U.S.” The FAA has noted that business aviation has been one of the fastest growing segments of GA activity over the last 15 years, and the communities BVY serves, have certainly benefited from this business market.

There are 18 businesses onsite and recently a large MRO that does maintenance on jet aircraft came on board. “We’re expanding our businesses and creating new leases, which is exciting,” says Bouillon. “We have a waiting list of businesses wanting to come onto the airfield because it’s such a strategic location. We are somewhat confined with residential and industrial use around the airport, but as we look at infrastructure development alternatives within our footprint, we can accommodate businesses that are waiting to relocate here.”

In 2019, BVY hosted the Massachusetts Airport Management Association conference and feedback from attendees reported a definite “buzz” going on and about Beverly. The Airport has seen incredible growth (17%) in total operations in one year (and 50% over four years), as well as a 144% increase in air taxi operations over four years. Much of the current customer base, largely from flight training, originates from throughout the Boston metro area and further west – bypassing other airports that may have similar service but not the same customer experience. Bouillon notes, “One of our companies, Avier Flight school says: ‘Welcome to the family, sit down and have dinner before you start your flight training.’ Our companies focus on marketing the New England style and customer experience, and corporate users are very attracted to Beverly because of this and the quick turnaround for the business traveler. The new owners of our Fixed Based Operator, North Atlantic Air place a red carpet down for every plane landing at their facilities. Attention to detail and the incorporation of unique character make this place so special. They serve mainly corporate traffic, yet, were able to get away from the ‘corporate feel,’ and create a space ever so inviting.”

The new Airport Master Plan will set the foundation to develop opportunities, particularly for the large cabin jet aircraft that are based at Beverly and transient operators. Bouillon acknowledges, “As we go through the master plan process, we’re looking at creative ways of using the footprint we have and at the safety areas that are encompassing the runways to determine if that space is adequate for the large cabin jet corporate aircraft that we’re serving, and will serve. We are redefining our vision and the mission statement to really highlight our recognition on a national level for what we can offer our customers and base tenants. Now our typical day is around 400 operations, so the question is: how do we incorporate this and build the sustainability in our long-term infrastructure plan?

“Many general aviation airports around the country that don’t have passenger service are seeing limited growth, if any at all. And for us to have over 50% growth in just four years is incredible. We really stand out as far as a general aviation airport, insofar as total growth, and anticipated rate of growth in the next 10 years. We’re quite an anomaly in our category,” says Bouillon.

Even through the recent events of the COVID-19 pandemic, the benefits of general aviation in serving communities in need is readily seen.  General aviation is and will continue to be an important and integral part of our aviation industry and will help lead the way back during the inevitable economic recovery. Even at the time of this writing, business jet operations are recovering, the Airport continues to spur desire for development, and the FAA has reinforced its commitment and support for BVY as it continues down its path of being the intelligent alternative for the Massachusetts North Shore.