“The place for smart banking”

With more than 500,000  members across the U.S. and over $12  billion in assets, Alliant Credit Union is a Made in America success story that embraces ‘smart banking’ through the evolution of digital technology as its model for the present and pathway to the future. A member-owned financial cooperative, Alliant has set a vision to be a digital-first credit union and recognized that transformation would be necessary to ensure the attraction and retention of an increasingly digital public, including financially-savvy consumers of all ages.

As tech-oriented as it is now, Alliant wasn’t formed yesterday. In fact, it has a fascinating past and more than eight decades of valuable experience under its money belt. As David Mooney, CEO of Alliant Credit Union, recounts, “We were founded in 1935 as the United Airlines Employees Credit Union; a single-sponsor credit union serving employees of United Airlines, and later their family members, for 68 years. When United was in bankruptcy following 9/11, and around the time I joined the company in the spring of 2003, the Board was considering their options and had come to the conclusion that exclusively depending on one company in one  industry was probably not prudent. So we made the decision to diversify our sponsorship and membership, but we liked the sponsor-based model. A lot of credit unions confronted that issue, particularly, if they had a sponsor that was shrinking, or bankrupt, or acquired by another company – what were their strategic options?” 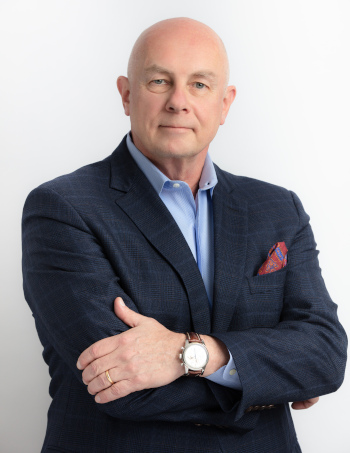 Many credit unions decided to adopt a community model, a more “traditional” banking model, serving a specific geography, typically by deploying physical branches. As Alliant assessed the options, they preferred a sponsor-based, employee benefits strategy, where they partner with companies and membership associations and other organizations to offer Alliant’s products and services to those employees or members. “We liked that model,” says Mooney, “because we saw it as less of a red ocean. I grew up in a traditional retail banking world at JPMorgan Chase and predecessor institutions, where product, price, and promotion are generic. Your choices, the selection, is all about branch location. Your market share, essentially, is equal to your branch share. And if you look at retail banking now, that’s largely the case when you exclude the direct banks. So, the way you grow is by deploying more branches. Which, if everybody else is doing it, nobody benefits and you end up with overcapacity, which is what we have today. It’s an arms race, and nobody wins but everybody spends more.”

Alliant was good at the wholesale employee benefits model because the credit union has a very strong financial value proposition, historically based on very high deposit rates, now also more balanced between the financial rewards to borrowers, as well as savers. That high financial benefit rests on having very low operating costs. Having served a nationwide membership because of  AndUnited Airlines’ footprint, Alliant had few branches and a limited transaction set (no cash operations). Throughout the years, most members accessed the credit union via phone and mail and more recently through online and mobile banking and ATMs. The firm’s costs for much of its history were about a third of the typical bank or credit union’s cost for a like-sized assets institution. And that translated to very high financial value.

Mooney explains, “It was an easy sell to employers and others because we could demonstrate that we could offer their employees or members a financial deal that they couldn’t get anywhere else. This was around 2003, when we began to diversify and look for partnerships with other, typically larger, companies. Often those with more disbursed operations where they didn’t care if we had a dense branch network. While United was our legacy sponsor, only about eight percent of our members are United employees, today. And we also have partnerships with Google, Kaiser Permanente, Aetna, BASF, the Chicago Bar Association, the California Association of CPAs, and a number of other relatively large and nationally disbursed companies and membership associations.”

Over time, that wholesale model has been supplemented, and to some extent exceeded, in terms of how new members are acquired by word of mouth. Today, 60 percent of Alliant’s new business comes through referrals from existing members and favorable mentions in financial media, websites and blogs. Some great examples: Named as Bankrate’s and MONEY Magazine’s Best Credit Union of 2019; MyBankTracker’s Best Credit Union of 2020; NerdWallet’s Best Banks 2019 and Best Bank for Online Experience of 2020. High marks given in those reviews generates a good amount of new business for Alliant.

In mid-June 2020, Alliant Credit Union announced the closing of its remaining two physical locations. Ten of the last 12 sites were closed back in 2018 and the decision to close the final two was made a little earlier than anticipated, given that the branches had already been shuttered for several months due to Covid-19. One of those locations was in the United Airlines headquarters in downtown Chicago and accessible only to United employees. The other was out at the Alliant Operations and Technology Center near O’Hare International Airport. So the firm is now officially branchless. 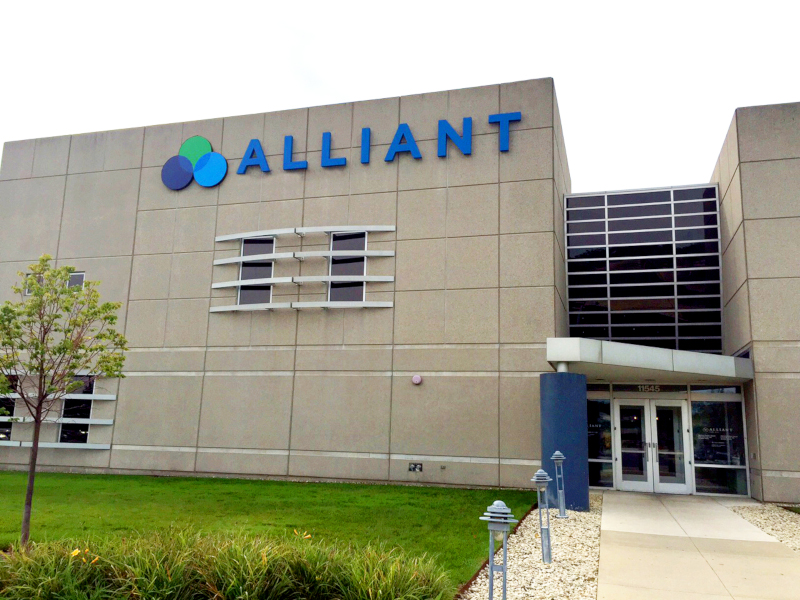 In all, the credit union employs about 650 people – a relatively small staff for their asset size. They operate a contact center for phone, email, secure digital and mail interactions, as well as market-leading online and mobile banking services. And secure chat is coming soon. Mooney acknowledges, “We’ve learned during Covid-19 that we can operate contact center agents in a remote environment. We don’t prefer to, so at the appropriate time we will get most of our contact center back in one location, but we’ll probably continue to have some people working remotely from home, including filling part-time needs to better match staffing to call patterns.”

Along with impressive business growth, Alliant does a fair amount of recruitment; acquiring talent over the past six or seven years to significantly expand IT functions, for example. Alliant Credit Union is consistently in the 85th percentile or better in Gallup’s employee engagement rankings and recognized by Great Place to Work as a top medium-sized work place. Mooney notes, “We consider ourselves a performance-based organization, that’s at the crux of our values. We reward for performance, we pay above the market median – we shoot to be in the top third of comparable employers. We can do that because we employ very few people for our size.”

The organization’s culture is member-driven; first and foremost built around mission, which is about delivering consistently superior financial value while simplifying and enabling how people save, borrow and pay. According to Mooney, “An integral part of that member experience revolves around our digital channel capabilities and our partnership with WillowTree. They have been helping us design, develop, and deliver a strong digital experience to our members on our online and mobile channels. Including a really strong user interface, which is where our members encounter us. Also, with subtle things that go on in the background around the functionality of the systems.

“And we have a partnership with a fintech company called Happy Money (dba Payoff) that provides access to credit card debt elimination loans to consumers. We originate loans in partnership with them, thereby helping people who want to manage their debt more responsibly and safely. Happy Money is a natural partner for Alliant. We’re both committed to the consumer’s welfare and share the view that we can do well by doing good. They bring advanced use of data science and other factors in their underwriting, and we bring a large, strong balance sheet and stable funding.” Over three years of partnership, Alliant has originated over $700 million in loans to over 40,000 new, high long-term value members brought to them by Happy Money. And because of the strategic nature of the partnership, Alliant and Happy Money have also been able to learn from each other and collaborate on new programs, features, and product development.

As far as community involvement, the Alliant Credit Union Foundation was formed several years ago with a focus on economic empowerment and financial literacy. The Foundation provides grants to organizations throughout the country that provide programs and services which directly help people become self-sufficient from a financial standpoint. Alliant also has an active, long-standing partnership with a national non-profit called Operation HOPE, founded by financial literacy entrepreneur John Hope Bryant. As part of their support, Alliant employee volunteers deliver a personal financial management skills curriculum to every student in the Des Plaines, Illinois middle schools. Mooney shares, “Our employees are incredibly generous with their time, and talent, and treasure in terms of supporting various causes and charities.”  The National Credit Union Foundation and the Filene Research Institute think tank are other entities that Alliant is pleased to support.

Retail banking has been undergoing a significant shift in market dynamics as a result of digital. Online and mobile banking provide tremendous convenience, but it goes well beyond that. Consumers now have access to abundant information, including price transparency, and a much larger set of providers. “You also see the emergence of new value players, like PayPal, who are building on the infrastructure we built,” says Mooney. “We believe we’re on the right side of the emerging differentiation in price, and experience, and brand. If your relevance to your customer is based on location, I believe you’re in trouble because the importance of geographic boundaries is eroding.

“We’re a financial cooperative, owned by our depositors, and therefore we have one reason to exist and that is to serve their interests. We’re not conflicted between serving outside shareholder interests vs. our customers, since the owner and the consumer are one and the same. We’re interdependent; organized functionally in a very collaborative environment. And we have a culture of disciplined improvement and execution. Strategic focus and constancy is one of our hallmarks.”

Alliant Credit Union has made great investments in technology and people and now they’re poised to focus all their investment on digital, rather than branch locations. Looking forward, Mooney admits, “We think we are in an increasingly advantageous position. In terms of objectives, there are a few things we need to get really good at: data and analytics and applied business intelligence. We need to become much more agile and adaptive in how we operate. We have to develop strong consumer-centered design competency deployed throughout our organization. We operate in a complex world of applications and data sources and we need to excel at integrating that ecosystem. And we need to get a lot better at digital brand management. We’ve identified these as key success factors – it’s a long-term development effort that we’re excited to be working on for the future.”

What: A digital-first, financial cooperative

Where: Headquartered in Rolling Meadows, Illinois

Happy Money® is a financial technology company delivering digitally-native financial tools and services for human happiness™ through its purpose-driven marketplace between mission-aligned capital and consumers. It partners with financial institutions to originate loans designed to help members say goodbye to credit card debt and save. Happy Money’s behavioral science and machine learning-based scoring provides partners with next generation technology and superior loan performance.

The Work Number is a proprietary database owned by Equifax and it is the largest central source of commercial employment and income information. The database houses payroll information from hundreds of thousands of employers nationwide—from Fortune 500 companies to small regional and local employers—and fulfills millions of verifications each year for a variety of organizations.

Citizens National Bank Bluffton – On a...

Trade Ideas – Scanning opportunities in the...

Black Mountain Sand – In basin. In...