Business View Magazine interviews representatives from Watertown, WI, as part of our focus on best practices of town, cities and counties in America.

The City of Watertown, Wisconsin is located in the southeastern part of the Badger State, midway between Milwaukee and Madison. A friendly, hard-working city, surrounded by lush forests and beautiful farmland, Watertown offers a small-town culture with big-city amenities, and a lifestyle that’s a little bit slower-paced, a little bit more affordable, and a positive energy, all its own.

The Rock River, a tributary of the mighty Mississippi and known by the Sauk and Fox Indians as “Sinnissippi,” meaning “rocky waters,” runs through the city, and the area was initially settled to utilize the power of the river, first for sawmills and later for hydroelectricity. In the 1850s, middle-class, German immigrants, fleeing from political turmoil in Germany, immigrated to Watertown and were welcomed by the descendants of its original Yankee population. For most of the 19th century, these two groups fostered the city’s commerce, industry, arts, and education. In fact, the first kindergarten in the United States was founded in Watertown in 1856 by Margarethe Schurz, wife of statesman Carl Schurz; the building that housed this kindergarten is now located on the grounds of the city’s Octagon House Museum.

Emily McFarland is Watertown’s mayor. The first female to occupy the post and a member of the Millennial generation, McFarland says that her election represents a group of the city’s younger citizens and investors who have come together to promote the type of change and growth that was first envisioned in 2014, when McFarland’s predecessor, Mayor John David, and Watertown’s Common Council, of which she was then a member, accepted the recommendations of the Watertown Riverfront/Downtown Redevelopment Initiative. 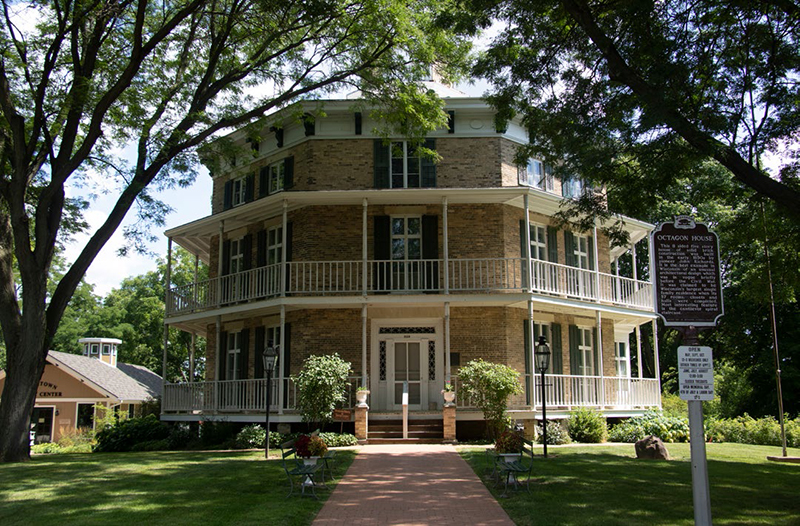 Some of the initiative’s objectives included: the creation of a physically and economically vital riverfront and downtown area by eliminating blight, ensuring appropriate land uses specifically, but not restricted to, the establishment of a comprehensive riverfront walking/biking pathway system with accompanying seawall and river edge improvements; redevelopment of the manufacturing and distribution properties into uses that are more conducive to revitalization of the downtown; improving both vehicular and pedestrian traffic; and enhancing the environmental attributes and historical character of the Riverfront and Downtown. Specific goals included: developing a centralized, multi-use public space in the form of a town square; and the development of riverbank amenities, including an amphitheater in conjunction with a library expansion and commercial development, which would add significantly to the vitality of the Downtown and Riverfront.

Kristen Fish-Peterson is the Executive Director of the Watertown Redevelopment Authority (RDA), established in 2016 for the purpose of carrying out blight elimination, slum clearance, and urban renewal projects in Watertown. In conjunction with the City, the RDA has done the heavy lifting on the new town square project, as well as coordinating proposals from private developers interested in purchasing and/or revitalizing downtown properties.

In 2016, the citizens of Watertown voted to support an extensive renovation and expansion of the city’s library, which dates back to the late 1800s. “When consultants, like myself, come into communities, we often see the same pattern: resistance to change,” Fish-Peterson relates. “So, it takes true leadership, and between John David and Emily McFarland, we saw that leadership, plus a younger generation of citizens and investors who have stepped up. The first signal that things were going to happen was when the library referendum passed. That gave me confidence that there was a group of residents that really wanted bigger and better things for their community and they knew that they could do it. So, it’s really exciting to see the investment by the private sector, and the commitment and investment by the public sector. The Watertown Area Chamber of Commerce formed a committee called the Collaborative Team. One of the first conversations we had was that a lot of citizens were curious if we could do the town square and the library expansion or would it end up being either/or. And we created a special marketing campaign to let them know that it could be ‘and’ instead of ‘or.’”

And so, among other projects that the city has taken on, the two main ones are the development of Watertown’s new town square and the expansion of its historic library. McFarland and Fish-Peterson talk about the twin projects: “The City of Watertown has the state’s longest historic downtown, and, by some miracle, there was a block of that downtown that housed little significant historical value,” McFarland begins. “That allowed the City, in conjunction with the Redevelopment Authority, to purchase five six buildings on one block. The RDA has torn them down and what will go in their place is our town square. The area will lead to a curbless street that segues into our historic Carnegie library, which is directly across the street to the west, where the city has acquired two other properties and the expanded library will go on there. So, in two blocks in our downtown, the City invested $4.3 in the library and we’ll be investing about a million in the town square.”

“We have a preliminary design completed, now, for the town square, and we are entering our fundraising and final design phase in the next weeks,” Fish-Peterson continues. “The construction documents will be developed in the late fall/early winter and we will be bidding the contracts for the construction of the town square in the early part of 2021, so that it can be constructed in the spring.”

The ground-breaking for the library expansion occurred on August 19th. Miron Construction Co. of Neenah, WI won the construction contract, coming in with a bid of $6,632,696, which was the lowest and comfortably under budget. The architect, StudioGC of Chicago, designed the new building and managed the bid process. When complete, the new Watertown Library Center will include a 180-person meeting space to support large events and programming, several small meeting rooms, a drive-up book drop, and a 3,000-square -foot TalkReadPlay Center for children. A glass wall will overlook the town square, providing a fantastic view and natural light to the 1984 section of the library. Most of the project funds were raised by the Key to Opportunity community fundraising campaign that concluded successfully last fall thanks to the partnership and generosity from the Greater Watertown Community Health Foundation, which donated $2.5 million, as well as many area businesses and patrons.

In addition, Fish-Peterson reports that there is a vacant city parking lot of about three quarters of an acre, just south of the town square location that has been marketed for development. “As we’re going through the process of designing and constructing the town square, we did put that site out for RFP and we received interest from a multi-family residential developer who’s interested in putting some market-rate apartments there,” she states. “We’ve also had interest from office development and, originally, we were marketing the property for a hotel. I think that paradigm has shifted with changes in the economy. We’re probably going to be reviewing proposals from developers related to multi-family housing on that site. The City also has other properties downtown, including another large surface parking lot near the water that would be prime for development. And then, there’s been some private assemblage on the northwest quadrant of Main St. and the Rock River, which is also prime for redevelopment.”

“We know that regarding economic development in cities like ours, the likelihood of landing large, multi-national companies is tough,” McFarland says. “So, what we try to focus on is what we can do to retain and attract businesses similar to what we have now and what we can do to make our community unique where a workforce would want to live. I was on the City Council when we voted in favor of the town square project because I wanted to know that we would be making an impact on attempting to attract a workforce that could support, attract, and retain new businesses to our community. So, we are happy to know that there is a potential for having housing right next to the town square that could also support our commercial businesses downtown.”

Another way in which Watertown’s downtown businesses are supported is via a revolving loan fund created by the RDA to help them make improvements to their properties. “It’s a two percent interest rate over five years,” Fish-Peterson explains. “We’ve partnered with three local banks, so we have good community participation. We also work with our state representatives and with the Wisconsin Economic Development Corporation for other grants and any kind of incentives that would be needed for environmental remediation. In addition, on the east side of the river, the entire downtown is included in a federal Opportunity Zone.”

“We have Tax Increment Financing available and we also have some smaller façade improvement grants,” McFarland adds. “The city does a lot of the legwork in researching and applying for things that are available. We also have done industrial revenue bonds for other developments in our community, which basically secures borrowing at a municipal rate instead of an open market rate. And, in Wisconsin, we have the Badger State Opportunity Fund; it’s a state-wide fund that makes participating in an Opportunity Zone project more streamlined. So, we’re very fortunate that investors can go into that fund.”

As the City’s two major projects come into fruition, and with the likelihood of more on the way, McFarland credits a new spirit of community energy that has spurred them on. “A few years ago, we were the community that wanted to be who we are now,” she states. “That is inspiring and incentivizing for businesses looking for a place that truly is turning the page. We laid a plan and we started checking off the boxes and now that we’ve done that, we have seen a massive investment of time and talent from people who want to be part of the change. I want people to know that we are rich in culture and we allow that culture to be our foundation, but we are also ready to make change in a positive way. The Watertown that I grew up in and the Watertown that my children will have will be profoundly different.”

Fish-Peterson agrees. “There’s a positive energy in Watertown, right now,” she enthuses, “that I hope we can continue to harness.”

WHERE: In Dodge and Jefferson counties, midway between Milwaukee and Madison